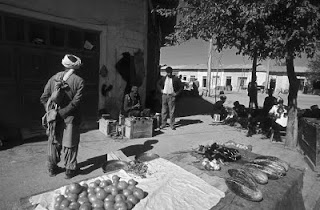 Turkoman Bazaar
Trip to Mary, Turkmen SSR.  (February 19-23, 1983.)  Mary is the center of the Murgab oasis, with a fine ninth century mosque.  Nearby is the site of Gyaur-Kala, (6-4c. BC to 3c AD). Now being excavated.
We made this trip in order to observe the Soviet Air Force which was conducting around the clock flight operations from the local airfield against targets in Afghanistan, over the mountains 200+ miles to the south. Mary is also only 50 miles from the Iranian border.
We flew first to Ashkhaband, the capital of Turkmenistan. We met a group of 50 Afghani leaders here for a visit.  The Soviets invited many such delegations from Afghanistan, where they were then conducting combat operations, to win hearts and minds.  I had a nice visit with one teacher of history, Farsi, Hindi, etc. from Nuristan in the Pamirs.  They like Babrak Karmal, but also like us Americans.  They were impressed with Ashkhabad.  They had one obvious liaison, a greasy Turkoman or Armenian who warmly said “Salaam Aleikum” to them.  There were also two “running dogs” unturbanned young Afghans who proudly told me they were all communists, as if to scare me away. They resented my long conversation in my weak Farsi with two Afghans, and visits with several more.
Sunday bazaar in Ashkhabad, the capital of this republic.  A sea of people with men and women in orderly rows, selling everything:  karakul hats, rugs, food, candy, auto parts, camels, sheep, turkeys, hashish.  Women in colorful Turkoman costumes, men in robe-like garments with huge karakul hats.  Most women and some men  do not speak Russian, and needed an interpreter to sell. 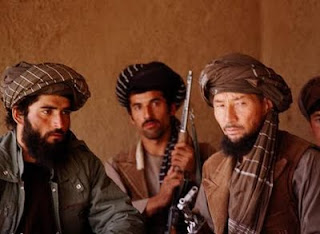 Turkoman men
Feb. 21, ’83. tour to Bayram Ali- Kiz Kala, Mausoleum Mohammad Ibn Zaid, who died 8 c. AD. Cupola, walls from 12 c. Here was tree tied with hundreds of strips of cloth by Moslems.  Here also were two goons, lurking.  Marty visited with three small kids and offered them gum.  The goons yelled at the kids.
Visited Trade Market in Bayram Ali, obviously a showplace, but in actual use.  Bought two tubes of Colgate tooth paste, made in Bombay.  Visited bazaar, then returned to Mary.  Walked in center of town that is crawling with soldiers and airmen. One man driving a brand new bike had just suffered a casualty on the way home from the shop where he’d paid 76 rubles for it.  He discussed the matter with me, for a I probably looked like a Russian authority figure to him.  I advised him to take it right back, but half hour later he was still in the same spot trying to fix it.
Mary is a real dirtball place. We stayed at Hotel Vostok, two floors, old, smell of urine in the passageway but our room as fairly comfortable.  No hot water, no toilet seat, but then it was only 15.40 rubles!
Dinner in hotel restaurant.. pleasant young gold-toothed Russian girl brought chocolate bar with our wine.  Cabbage and garlic salad.  Russian man at the next table teaching his table companion how to talk Pashtu.
We arose early on Feb. 22 to catch a cab to airport, then found that our plane didn’t leave until 10:15 a.m. We had 12 surveillance people, including a Soviet AF major and two troops who followed us across the street to breakfast. (Curds, lemon sauce and sugar, and milky coffee.  Marty didn’t partake. Then, I went to the toilet, and they followed me.
It was a typical Turkoman latrine, two opposing rows, all these guys squatting,  reading “Pravda” as they squat.  The smell is terrible.
Soviet fighters were taking off in groups of one to four on a strip across from the civilian airport.  Conducting operations in Afghanistan.
The same 50  Afghans we met in Ashkhabad arrived in Mary, with police escort for their bus. While our surveillance watched, the Afghans waved at Marty and me, and I told two nearby Georgians that they were “our friends.”  The Afghans are a group of influence affectors, teachers, holy men, village leaders, wearing all kinds of different Afghan costume, but mostly turbans, wide, baggy pants and rubashkis.
Here are some Soviet Navy propaganda posters from The Personal Navigator:

You may contact me at scoulbourn1@verizon.net
Posted by The Personal Navigator at 7:56 AM