Life in a Ballistic Missile Submarine

The Day Kennedy Was Shot 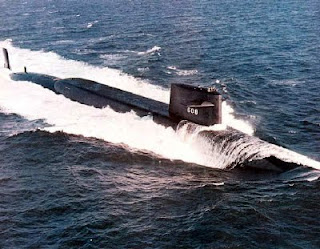 USS Ethan Allen (SSBN 608)
It was 1963.  I was Weapons officer in USS Ethan Allen (SSBN608) (Gold) and we were tied up alongside the tender in the Holy Loch, Scotland. My assistant was not due to arrive until just before we sailed on patrol.  It was necessary for a weapons-trained officer to be aboard at all times, so no liberty in for me that month.
But, hark!! Alongside came HMS Dreadnought, 's first nuclear submarine.  I couldn't go ashore, but I could certainly visit a ship alongside, and I did, and had a couple of nice "wee whiskeys" there.  Then we invited the officers back to our boat for a proper American dinner.  I remember the happy scene that would have brought down the wrath of Rickover, as our Chief Engineer and Dreadnought's engineer, arm in arm and quite cheerful, headed aft  in our boat to conduct the pre-critical checkoff together.
I made four patrols in Ethan Allen, each about two months in duration, submerged all the time.  I had come aboard in March, 1963, just a little while after the Cuban Missile Crisis of 1962.
One of the agreements in resolving the Missile crisis, in return for removing Soviet missiles from , was for the to remove its Jupiter missiles from .  This left targets in the USSR uncovered and so Ethan Allen and other SSBNs were ordered to pick up those targets, which meant that during part of our deterrent patrols we would have to move into the eastern Mediterranean Sea. 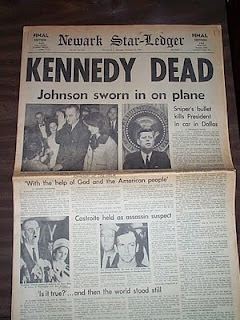 We were on patrol on November 22, 1963 when we received a flash message that President Kennedy had been shot.  We were on Zulu time, six hours ahead of Dallas, and when the flash message arrived at around 1900Z, (7 p.m. Greenwich Mean Time) no one in our government knew what would come next.
A short time after the news of the shooting, before we had heard that Kennedy had died, we got a Weapon Systems Readiness Test (WSRT).  These were very real alerts sent to SSBNs on patrol, meant to test the readiness of the Polaris weapon system.  We responded just as we would for a real attack order; we didn’t know if it was the real thing or a drill, as we brought 16 missiles up to readiness for launch and flight.
We  imagined that the assassination might be part of a large plot by the Soviets, culminating in a nuclear attack on the .  For a very scary period of time we didn’t know if we would be ordered to launch missiles for the start of World War III. The Captain and the executive officer held the actual message, which in this case was indeed a test, and we didn’t arm the nuclear warheads. But it was scary!

We all know now that the Soviets were not launching an attack, but we didn’t know it then, and things were very tense for several hours.

In the next several days we were fed news reports which helped us to piece together a fragment of the massive television and newspaper coverage that the rest of the world was getting.  When we returned to Holy Loch in early January 1964 we received our mail, and old Time and Life Magazines which reported all about the killing of the President, and then the killing of his assassin, Lee Harvey Oswald, and Kennedy’s funeral and the start of Lyndon B. Johnson’s administration.
My “catching up” on the news now that I was back on dry land had to wait, though, because I took Marty to the Navy hospital to have a little girl.   That little girl is now all grown up, and has a family of her own.
Now, here are some books and paper that I am offering: 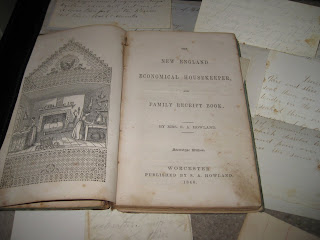 New England Economical Housekeeper, and Family Receipt Book, The, Stereotype Edition [Second Edition]  by Howland, Mrs. E.A. (Esther Allen)  1846 Worcester, MA: Howland.  Little book provides New England housekeepers with recipes for scores of dishes, then in Medicinal Department, guidance for asthma, bleeding at the nose, burns and scalds, salve for a burn, sore mouth, dysentery, diarrhœa, consumption, corns and more.  Menu for Thanksgiving Dinner: Roast Turkey, stuffed; a pair of chickens, stuffed and boiled, with cabbage and a piece of lean pork; chicken pie, potatoes, turnip sauce, squash, onions, gravy and gravy sauce, cranberry sauce, oyster sauce, plum and plain pudding, with sweet sauce; mince, pumpkin and apple pies. Recipes include Dyspepsia Bread, Rice Bread, Johnny-Cake,
Temperance Cakes, Mutton Pie, Indian Pudding, Boiled Calf's Head and Pluck  (tongue, heart, liver, brains); Mutton with Oysters; Indian Gruel, Sassafras Mead, many more.  Also inserted in book are ten+ handwritten recipes for Fruit Cake, Sweet Pickles, Cure for Dysentery, Pork Cake, Pickling Beef, Lemon Pie, Blood Syrup, more.  Also list of those who died in Winchendon (MA) in January, 1875. Excellent little glimpse into New England life in the Nineteenth Century. Frontispiece illustration of two women in kitchen. 108 pp. 10.5 x 18 cm. Paper on board with cloth tape spine; spine worn and frayed. 12+ handwritten recipes and notes and one 1875 newspaper clipping with recipes  inserted.  Book binding cracked, fair. (8099) $102.00. Cookbooks/Ephemera
To boil a Calf’s Head and Pluck
Clean the head very nicely, and soak it in water till it looks very white. The tongue and heart need longer cooking than the rest.  Boil these an hour and a half, the head an hour and a quarter, and the liver an hour; tie the brains in a bag, and boil them one hour. Take up all at the same time; serve up the brains with pounded cracker, butter, pepper, vinegar and salt. To be eaten with butter gravy. 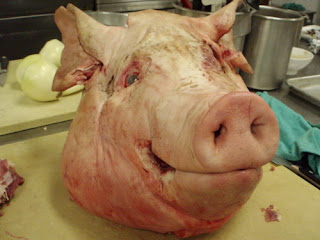 Recipe for Head Cheese
Head Cheese
Take a hog’s head, ears, and feet, and boil them till you can pick all the bones out; then season it with salt, pepper, and a little sage, or summer savory; put in a round dish, or cheese-hoop, in a cool place, and press it; when cool, it is ready for use. 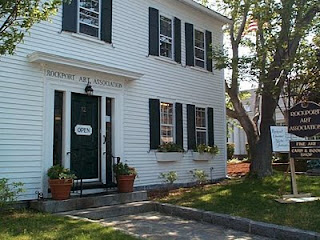 Posted by The Personal Navigator at 7:55 AM