The Civil War in newspapers and books 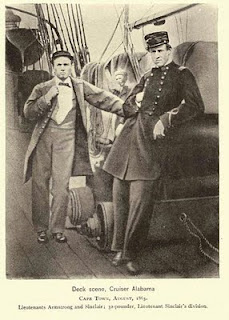 Two Confederate Naval Officers
Aboard CSS Alabama, 1863
I’m old enough to feel very personally about the Civil War.  Growing up in Texas in the 1940s, even in the midst of World War II, the Civil War was very much alive.  My mother’s family came from Louisiana and Mississippi, the men fought for The Cause; my grandmother told stories of the years after the War and the carpetbaggers, coming down from the north, to “stir up” the colored people.  My grandmother was a liberal in southeastern Texas before that was fashionable.  She did a lot to help black people in those years when segregation was very much a part of our lives.
I remember the white-bearded old Civil War veterans, riding in cars in parades, and I remember the sometimes violent celebrations by blacks at “June Teenth,” the commemoration of General Granger’s announcement to blacks at Galveston, TX on June 19th, 1865 of the Emancipation Proclamation, enacted two and one-half years earlier by President Lincoln.
On visits to Mississippi and Louisiana when I was young I got a glimpse of the old, ante-bellum elegance of “comfortable” white people living on plantations in the South:  The big, white houses with long verandahs, the huge old magnolias and moss-hung live oaks, and the blacks, old retainers, earnestly serving their employers.
Yankees seemed to see only exploitation and Southern arrogance in those scenes, but there was much more.
Attending the Naval Academy during the 1950s I gained a fine appreciation for the role of the Union armed forces in the Civil War, and today I feel a great respect for both sides who fought in this war. I hope you will enjoy some of the items in this collection.
Alabama: National and Private "Alabama Claims", The; and their "Final and Amicable Settlement" by Beaman, Charles C., Jr. 1871 Washington City, DC: Office of the Librarian of Congress.  At the start of the American Rebellion in 1861 the Confederate government found that in naval strength it was vastly outnumbered by the United States Navy, and it would be necessary to interdict Union commerce.  England and English shipbuilders were very cooperative with the Confederacy, and allowed construction of Confederate gunboats that were very effective in attacking American shipping worldwide.  On May 15th, 1862 CSS Alabama, known as "Gunboat 290" was launched at Birkenhead, Liverpool.  Page 351 contains a list of the some 67 ships, barks, schooners and brigs destroyed by Alabama, and subsequent pages list ships destroyed by CSS Florida, Georgia, Shenandoah, Nashville, Olustee, Sumter, Tallahassee and others.  This book is a collection of diplomatic correspondence, military correspondence and historical records relating to the matter of Great Britain's questionable acts of neutrality vis-à-vis the Confederate States, and of the negotiations to settle claims after hostilities ended.   358 pp. 14 x 23 cm. Paper on board with cloth spine, cover stained and soiled, fair. (4635) $85.00. History/Civil War
Scott's Infantry Tactics, Vol. II: Infantry Tactics; or, Rules for the Exercise and Manœvres of the United States Infantry, New Edition,  by Major-General Scott, U.S. Army 1861 New York: Harper and Brothers, 329 & 331 Pearl Street, Franklin Square.  Only  volume II. This small book is a new edition, prepared by Major General Winfield Scott, and the book used by Union soldiers in the Civil War. [It was probably used by Confederate Soldiers, also.]  School of the Battalion. Instruction for Light Infantry and Rifle, or Skirmishers.   Included in this small book are fold-out illustrative plates: there are 24 listed, but eight contain only description (8 plates missing). 228 pp.+75 pp. explan. of plates and plates. 9 x 13. 5 cm. Marbled paper on board with leather spine, spine worn, edges scuffed, pages quite clean but 8 of 24 fold-out plates are missing. Good. (3756) $160.00. Civil War/History/Military