Life in the Newspaper World 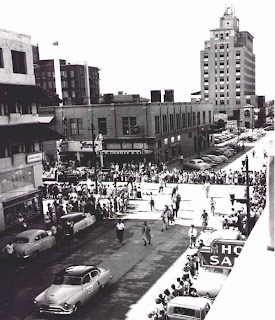 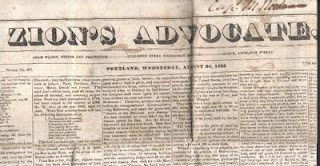 Zion's Advocate, Portland, ME, 1836
Boston Gazette, Monday, October 19, 1812  Boston, MA: Russell & Cutler. 4 pp. 35 x 52 cm. Published as the War of 1812 was raging, this issue contains numerous mentions of the War.  Letter to publishers refers to war a "Mr. Madison's War" and suggested that the President was not only duped, but also insulted,  by Bonaparte. Long report of arrivals and clearances of ships in American ports, detailed report of arrivals and departures in Port of Boston. Report from Charleston, SC of capture of British Packet Princess Amelia by American Privateer Schooner Rossie, commanded by Commodore Barney. Report from Halifax of Court Martial of Capt. Dacres of HMS Guerriere, for giving up his ship to USS Constitution. Report from British Canada notes that loss of the masts of Guerriere was occasioned more by their defective state than from the fire of the Americans. Report also notes that British prisoners were offered high bribes to enter into the land and sea service of the U.S. Report  from Secretary of the Navy exonerates Lieut. Crane in loss of the U.S. Brig Nautilus. Advertisements for Russian Feathers, Gauze Flannels, Woollen goods, fresh flour, Petersburg hemp, elegant Canton China, more. Newspaper, edges frayed, perforations in folds, fair. (7487) $59.00. Newspapers/History
Newburyport Herald and Country Gazette, Friday, July 2, 1813 Newburyport, MA: Newburyport Herald and Country Gazette, 16 State St. Newburyport Board of Selectmen announces a quarantine for any vessels from the West-India Islands…"who shall have been visited with the Plague, Small Pox, Pestilential or Malignant Fever." Members of the Association for the Suppression of Vice and Immorality will meet at Newburyport Bank on Saturday, 3d July next.  News of the Discovery of the body of King Charles in a lead coffin at Windsor Castle. When the coffin was unsealed, the Prince Regent and others recognized the body of the Martyred King; when they lifted it up, the head fell off, owing to the fact that it had been cut off with an axe, and cemented later.  Long report from the Missouri Gazette about the journey of the gentlemen from the New York Fur Company from the Columbia River of the west across the Rockies to St. Louis. They met with a party of Crow Indians who behaved "with almost unbounded insolence" and stole all the party's horses.  At St. Louis the party first learned of the current war with England. "By the Mails" Report from Norfolk: "British Reinforcements in the Cheasapeake"  Thirteen British ships under Admirals Cockburn and Warren have anchored at Willoughby's up to Hampton Bar. Report of attack on British by Captain Tarbell and his gun-boats. British attempt to land near Crany Island. Letter from New York notes that former Secretary of War Henry Dearborn has resigned as general in charge of the Niagara Defense sector, and General Morgan Lewis has taken over. Advertisements for auctions at Newburyport for real estate of William Hunt, late of Newburyport; also Samuel Brown, Jr., late of Newburyport, and at Union Wharf, rigging, blocks, water casks, cannon, cask of powder, 3 boxes of chocolate, and more. 4 pp. 30 x 50 cm. Newspaper, small tears in folds, good. (7276) $51.00. Newspapers/History
Columbian Centinel, Boston (Massachusetts) Wednesday Morning, June 5, 1816 Boston, MA: E.G. House. Report of cavalcade which drove to Medford to escort Governor Brooks to Boston, in a long procession of carriages.  When the cavalcade arrived, they found Gov. Brooks mounted  and ready to set out for Boston. There were speeches; His Excellency Gov. Brooks noted that he had been a soldier of the Revolution under the immortal Washington. Inundation in New Orleans: Letters of May 8th report that the levee of the river has given way and water in the back streets was above a foot deep.  Report from Milledgeville, Georgia  that Indians have surprised soldiers near Fort Gaines and driven off 30 head of cattle. The Seminoles have been drinking their war physic, and dancing for several days, and it was understood that they were preparing to strike a blow somewhere. Report from Spanish America that Royal Spanish Army has defeated the insurgents,  part of force has been ordered back to Venezuela, part to reinforce royalists at Lima, and others to overturn the revolutionary government of Buenos Ayres (now Buenos Aires). 4 pp. 36 x 52 cm. Newspaper, quite frayed at edges, but very readable. Fair. (6874) $38.00. Newspapers/History
Zion's Advocate, Vol. IX No. 376, Wednesday, January 20, 1836 Portland, ME: Adam Wilson, Editor and Proprietor. Missionary report from Armenia; The Dying Mother; Anecdote about Chief Justice Marshall; in U.S. Congress, appeals for abolition of slavery; Dr. Channing on Slavery. 4 pp. 39 x 54 cm. Newspaper, edges creased, small tears where folds intersect, address "Cap M. Woodman, N. Gloucester" on top edge. Good. History (4380) $26.00.
Zion's Advocate, Vol. IX No. 383, Wednesday, March 9, 1836  Portland, ME: Adam Wilson, Editor and Proprietor. News of revivals; Anti-slavery hymn; Missionary report of Maulmein, up the Attaran; Article on Vulgar language; Mexican government claims visitors landing on Texas coast will be declared pirates. 4 pp. 39 x 54 cm. Newspaper, edges creased, small tears where folds intersect, address "Cap M. Woodman, N. Gloucester" on top edge. Good. History (4382) $26.00.
Zion's Advocate Vol. IX No. 15, Portland, Wednesday, April 13, 1836 Portland, ME: Adam Wilson. In Sandwich Islands, sailors given bibles are selling them for rum. Solution: wait till ship is at sea to give bibles to sailors. Temperance in Louisiana. Anti-slavery Society in New York City. Temperance in Buxton, ME. 4 pp. 40 x 56 cm. Newspaper, some tears in folds, good. (6170) $15.00. Religious 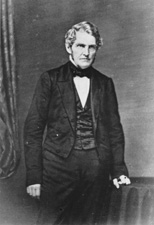 Senator Simmons of Rhode Island "has not yet
electrified the Senate with his eloquence."
Republican Herald, Providence (RI) Saturday morning, July 3, 1841 Providence, RI: William Simons, Jr. Death of Major General Macomb; U.S. Congress resolved to attend his funeral.    Reader complains that The Herald does not publish the speeches of Senators from RI, Dixon and Simmons. "Balaam's Ass once spoke, and a woman has been known to be dumb!"  Senator Dixon takes the subject of his speeches from the Providence Journal and therefore we have no need to repeat them. Senator Simmons has not yet electrified the Senate with his eloquence, nor shed the effulgent radiance of his towering genius on the nation.... nevertheless we have a TIllinghast in the other House, who can talk and say nothing as long as any man living."  Since the Fourth of July falls on a Sunday, the celebration of the American Independence will take place on Monday the Fifth. Order of Procession for Suffrage Parade on the 5th of July, 1841, Col. Eaton W. Maxey will be Chief Marshal of the day; Revolutionary Soldiers will proceed in carriages; Canoe drawn by two horses, representing Roger Williams landing on What-cheer Point. Etc., etc.  Small article notes that General Harrison and John Tyler have made more removals from office in three months than did Washington, Adams, Jefferson, Madison, Monroe, J.Q. Adams, Jackson and Van Buren did in 52 years. Ads for Boston and Providence Rail Road; Steamboat Balloon, Capt. B.F. Woolsey, leaves Providence daily at 9 1/2 o'clock a.m., leaves Newport same days at 3 p.m. Landing at Bristol. East Douglass and Providence Daily (Stage) Line; N. Jersey Steam Navigation Co. Daily Line between Stonington and New York, steamers Rhode Island and Massachusetts. Ad for Arkansas Bounty Lands--see Shubael Blanding, Providence. Ad for Pure Lemon Syrup made from Sicily Lemons, which, by weight and flavor, cannot be surpassed. Ad for Ladies Boots and Shoes made to order, J.C. Martain, 20 1/2 Westminster St. 4 pp. 40 x 54 cm. Newspaper, many small holes in folds, poor. (7405) $34.00. Newspapers/History
Boston Evening Transcript, Thursday Evening, January 17, 1861 Boston, MA: Henry W. Dutton & Son. Filled with Civil War news. Telegraph dispatch reports that Mississippi Senator Jefferson Davis is urging moderation, and vouches for Major Anderson, now commanding Fort Sumter, in Charleston (SC) Harbor.  President Buchanan is very anxious to avoid bloodshed as messages and messengers fly back and forth.  The President, it is reported, will be willing to recognize a de facto government embracing three or more states. "The Secession Theory of Debt" is indignant editorial about South Carolinians who have passed a bill in their House to stay the collection of debts by Carolinians to men in non-slaveholding states. "A non-slaveholder may be, purely in consequence of his lack of 'niggers,' a very contemptible creature, unworthy of a Southern gentleman's notice..."  Major Robert Anderson, a 56-year-old Kentuckian who commands the Union forces at Fort Sumter, is much in the news.  Discussion of selections for President-elect Lincoln's cabinet. Ban on "ardent spirits" in Massachusetts State House. Editorial questions whether this is enthusiasts, fanatics or liquors.  Poem on page one ridicules idea of South Carolinians leaning toward monarchy. Discussion on Slavery reports from recent sermon by Dr. Leonard Bacon in New Haven.  Discussion of necessity and feasibility of constructing a Cape Cod Canal, to connect the waters of Barnstable Bay and Buzzard's Bay. Humor about "The Star of the West", the Union ship fired upon by southerners at Charleston. Lincoln to be escorted to Washington by the Illinois Zouaves. 4 pp. 49 x 68 cm. Newspaper, tears in some folds, 5 cm closed tear in pp. 1-2, poor. (7406) $26.00. Civil War/Newspapers 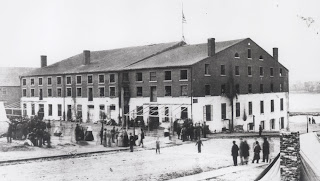 Libby Prison, Richmond
Republican Herald and Rhode Island Gazetteer, Providence, Saturday, August 14, 1869 Providence, RI:  Noah D. Payne.  4 pp. 50 x 72 cm. Reminiscence about Federal prisoners in Libby Prison (in Richmond, VA).  Murder in Boston: Story of a Tennessee Major, a patient living in the home of a prominent doctor, gets called for reading too loud, and goes on rampage, shooting and killing doctor's wife. Barbarity in the U.S. Navy: Story of Lieutenant Commander H.B. Seely, in USS Pawnee, who caused a sailor in his ship to be hung by his arms for three days for theft, and now the poor man must have one or both arms amputated.  Now it turns out that two or three negroes were the guilty parties. Report that the United States Government has opened negotiations with Spain for the independence of Cuba. What the Mosquito is Good For. Newspaper, edges frayed and tattered so that portion of text on page ends is unreadable. Poor. (7200) Civil War/History Newspapers
Manila Bulletin, Manila, Philippine Islands, Saturday, November 24, 1928; also front page of Nov. 27, 1928 issue  Manila, PI: The Manila Bulletin Publishing Co., Inc. "Typhoon Causing Widespread Damage, Japan Ship Aground"--Saka Maru Hits Land Near Masbate, Engine Room Flooded; Bicol and Visayan Provinces Hard Hit.  "Dollar Line to enter P.I. Shipping Trade" --vessels will be 350 ft. in length and ply between 11 islands. Dolar Company to advertise P.I. as Tourist's Mecca. Canadian passenger liner Empress of Canada arrived yesterday at Manila.  Ship was buffeted about by mountainous winds on voyage from Victoria, BC to Yokohama. Senator King (D-UT) is talking with President Coolidge about Independence for the Philippines.  "Tries to Burn San Lazaro"--- patients in panic when Insane man tries to destroy San Lazaro Hospital.  November 27 issue has large banner headline: "25 DIE, VAST LOSS IN TYPHOON; STIMSON TELLS WAR DEPARTMENT P.I. MAY NEED U.S. ASSISTANCE." 8 pp.+ 4 pp. 44 x 58 cm. Newspaper, small chips in edges, tear in horizontal center fold of page one, fair. (7863) $26.00. Newspapers/Philippines
Posted by The Personal Navigator at 2:44 PM