The Navigator Becomes a Tour Guide 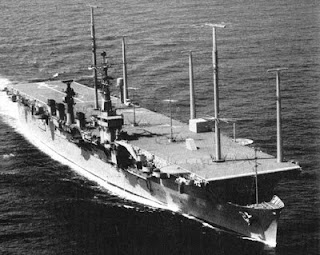 USS Wright (CC-2)
I call this Blog “The Personal Navigator” because I thought that in my retired, civilian life I would like to “navigate” people into happy meetings with interesting books and papers.  Naval officers are all trained to be navigators.  Let me tell a little about my first job as a navigator.

Capt. Frank Romanick was skipper of USS Wright, a small (46,000 ton) carrier converted to a “Floating Pentagon” for the President in time of nuclear war. Frank was the public relations person par excellence.  He lived for seeing his ship’s picture plastered across a newspaper page, or on TV.  He came from command of a naval communications station in the , where he had been known all over the for his publicity tricks.  Now he commanded a ship that, in time of war might have the President aboard.  I was his navigator. The year was 1968.

This was a remarkable ship— it had once been a light aircraft carrier, but was now converted to a super state-of-the art floating communications station, a “National Emergency Command Post Afloat”.  Large antennas sprouted from the flight deck, and we had a helicopter that would often lift a heavy wire antenna several thousand feet in the air, its other end tethered on the ship, to experiment at sending signals if this ship took over from shore facilities in in time of a nuclear war.  This was just at the dawn of satellite communications.

The central part of the ship was called “The Box” and it contained all the communications systems and an operations control center manned by a special team of officers* and enlisted men from all the armed services, and NSA, CIA and so forth.  We even had a grandiose state room called “Flag One” which was designed for the President, who was then Lyndon B. Johnson. It even had the array of three television sets that LBJ always demanded  wherever he went.  Flag One also had a marvelous oversized toilet for the Presidential bottom.

Romanick discovered that ships got good press when they did good deeds.  When we visited a port, he sent the Chaplain out in one direction and me in another, to round up orphans, kids of all descriptions, ladies' groups, whatever, to tour that ship.

The Captain thought I was a “natural” as Head Tour Guide, because – what else is the Navigator going to do when the ship is in port?  Every time we came into a port—any port— our decks were seething with kids’ groups.

We had ship visits down to a science:  Bring them aboard in the hangar bay, welcome them, give them yellow "Wright Guy" buttons, then put them on the flight deck elevator and send them topside.  Play with a gun mount.  Look at the helo.  Watch a liferaft inflate. Climb up to the bridge. Then, down to the mess decks for cookies and fruit punch.  Then off.

Once a month in port in , we'd have massive “Bravo Zulu” ceremonies, where Romanick would give large plywood keys, painted with the ship's logo, to people who really excelled at something, like giving the most blood at a blood drive, or leading a team of sailors to clean up a school in . [“Bravo Zulu”is Navy code for “Well done!”] Captain Romanick congratulates his
wife on a job "Well Done!"

Romanick discovered that you could get good press for rescuing someone at sea, so he tried to turn us into a Coast Guard cutter, by steaming into hurricanes or other storms, looking for ships or boats that had sent a distress signal.  We rescued a few, but as the President's National Command Post Afloat, a carrier, acting like a small, agile cutter--- was that our mission?

Frank came up with another scheme to get publicity.  We’d do a burial at sea!  The brother of one of our officers had just died, and so the plan was to bring his coffin aboard and bury it at sea, with appropriate ceremony by several chaplains and gun salute, and all hands on deck in dress blues.  The ceremony went nicely, with cameras snapping and capturing every move, and the coffin was eased down a slide on the stern.  However, they had not put enough air holes in the coffin, nor weighted it down enough, and so it floated along astern of the ship.  Romanick was furious and ordered the stern gun mounts manned and away they blasted at the poor, defenseless floating coffin, until it finally sank.
That was our last burial at sea while Frank was commanding.
Let me “navigate” you to some books….
Trumpet Notes for the Temperance Battle-Field; a careful compilation from the best sources for Temperance Assemblies, Gospel Temperance and Prohibition Meetings, etc. by Stearns, J.N. and Main, H.P. 1888 : National Temperance Society and Publication House. The power of song in the Temperance Movement cannot be overestimated. "Trumpet Notes"  is a compilation of the choicest temperance songs, to aid in the growing sentiment against drink and the saloons. "Lift Up Your Voice in Trumpet Notes", “God's Clock Has Struck the Hour", "Daybreak", "Freedom's Day" and "Blow the Temperance Trumpet." 192 pp. 13.5 x 20.5 cm. Decorated paper on board, stains on cover. Bookmark from Helen P. Ross. Inside front hinge of book contains cracks, other defects.  Good. (5427) $42.00.  Music/Temperance

Meliboeus:
You, Tityrus, 'neath a broad beech-canopy
Reclining, on the slender oat rehearse
Your silvan ditties: I from my sweet fields,
And home's familiar bounds, even now depart.
Exiled from home am I; while, Tityrus, you
Sit careless in the shade, and, at your call,
"Fair Amaryllis" bid the woods resound.

Navy Regulations, 1865; Regulations for the Government of the Navy. [Book belonged to Ens. James H. Bunting, recognized for his action in helping to destroy a Confederate salt work in 1864.] 1865 : Government Printing Office.  Naval Regulations book belonged to  "James. H. Bunting, U.S. Frigate Potomac", who is recognized in history of Civil War for his work in leading a naval party from USS Ethan Allen to destroy a South Carolina salt work. Navy Regulations include Regulation Circular No. 1 signed by Gideon Welles, Civil War Secretary of the Navy, August 1, 1865; Regulation Circular No. 4, by Welles, dated Aug. 22, 1866, detailing books to be carried aboard a cruising vessel by midshipmen. 345 pp. 12.5 x 19 cm. Blue cloth on board, quite worn, front and back outer spine cracked, 1 cm sword, etc. puncture in book penetrates first 120 pages. Poor. (3761) $150.00. Naval/Civil War/History
[Boat crews from U.S.S. Ethan Allan, Acting Master Isaac A. Pennell, landed at Cane Patch, near Murrell's Inlet, South Carolina, and destroyed a salt work which Pennell, who led the expedi-tion himself, described as "much more extensive than I expected After mixing most of the 2,000 bushels of salt into the sand of the beach, the Union sailors fired the four salt works as well as some 30 buildings in the surrounding area. The next day, off Wither's Swash, Pennell sent Acting Master William H. Winslow and Acting Ensign James H. Bunting ashore with two boat crews to destroy a smaller salt work.]

Ladies' Repository for 1850, The, Rev. B.F. Tefft, D.D., Editor 1850 : L. Swormstedt & J.H. Power.  Splendid collection of elegant engravings, poetry, music, religious thoughts, travel, all manner of literature, book reviews, commentary, attacks on "corrupting literature."  Impressive array of reading for educated women: Lead article for February discusses three books on The Jesuits, gives a colorful description and discussion, but ends with a stern message against the "Romish denomination."  An Incident of the Hungarian War. Adulation of Kossuth. "Tracks of a Traveler" for September relates journey from to to and eventually to Martha's Vineyard and . In , editor attends wild meeting of the "radical, abolition, non-resistant, woman's rights, anti-Church, no-government, general-reform, out-and-out, come-out, Garrisonian Society of Fanatics. Never since the flood, has there been such a congregation of lunatics, as were assembled."  Report from on new strides in women's equality. 412 pp. 16 x 25 cm. Red leather on board, moderate edge wear, engravings and some pages foxed, very good. (4821) $60.00. Women's/Religious/Travel/Poetry/Literature 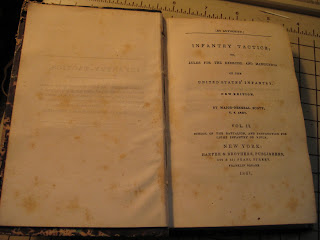 Scott's Infantry Tactics, Vol. II: Infantry Tactics; or, Rules for the Exercise and Manœvres of the United States Infantry, New Edition,  by Major-General Scott, U.S. Army 1861 New York: Harper and Brothers, 329 & 331 Pearl Street, Franklin Square.  Only  volume II. This small book is a new edition, prepared by Major General Winfield Scott, and the book used by Union soldiers in the Civil War. [It was probably used by Confederate Soldiers, also.]  School of the Battalion. Instruction for Light Infantry and Rifle, or Skirmishers.   Included in this small book are fold-out illustrative plates: there are 24 listed, but eight contain only description (8 plates missing). 228 pp.+75 pp. explan. of plates and plates. 9 x 13. 5 cm. Marbled paper on board with leather spine, spine worn, edges scuffed, pages quite clean but 8 of 24 fold-out plates are missing. Good. (3756) $160.00. Civil War/History/Military

Posted by The Personal Navigator at 7:23 AM