The Spirit of Mac McCarthy 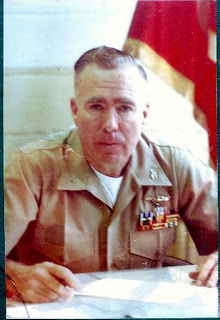 Mac will always be a part of our lives. He’s been gone a year, now, and his spirit is still with us.

Donald Joseph McCarthy made an impact upon Rockport.  He and his wife, Jennifer, came to live in this little town some 20 years ago.
I first met Mac and Jennifer when my wife and I visited the Marine Air Base he commanded in .  At the time, I was commanding a Navy base in the south of .
Mac was a fighter pilot from Anaconda, .  He flew many missions in , and many more, flying off a carrier in the , and all over the world.
When Mac returned from he retired from the U.S. Marine Corps, but he was a Marine for life.  Even in civilian clothes, he still looked like a Marine.
Mac was a good friend. He was generous. He had a wonderful sense of humor, heavily colored an Irish green.  For him, the glass was always at least half full.
He loved his faith—he was a loyal communicant of the Roman Catholic Church, and vigorously defended that faith.
He loved his adopted town.  He got involved in many different activities.  I can see him now, standing in borrowed waders in the middle of the Mill Brook at Millbrook Meadow, pulling out trash and straightening the rocks on the side of the brook.
He wanted to help find good people to serve on the Board of Selectmen, and from then on he was involved in local elections, raising money for candidates, putting up signs, holding signs before election time (both he and Jennifer did this!) and both of them held gatherings at their home to introduce candidates to other Rockporters. 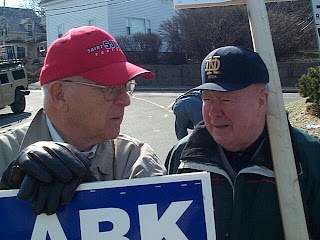 Mac loved the experience of getting people together to accomplish something in a small town, and he did it many times.  After all, this man had spent his life as a leader, and influencing other people came naturally to him.
And entertaining.  Mac and Jennifer loved nothing better than to entertain people, always with strict attention to polite, old-style graciousness and formality.    You could always count on an introductory speech by Mac, and an eloquent toast.
Jennifer always prepared elegant food—she still does—and Mac served cocktails on a silver salver (tray).   They brought the style and taste of social gatherings they had held in their homes around the world to their home in Rockport.

At Twelfth Night, 12 days after Christmas, they always had a great, traditional, and very English celebration, with drinks, good food, including little mince pies, and Christmas carols.

But one thing about the Spirit of Mac was his strength and resilience.  A man takes a lot of punishment in a thirty-year career as a Marine aviator, but when Mac came to Rockport he began to face health challenges one after another:  colon cancer, heart problems, operations, more cancer, more heart problems, more operations.  Through it all, he kept his same good humor.
Even lying in a hospital bed, with tubes going in and out of him, he’d have a good joke to tell, or a cogent observation.
Somehow, his spirit is around.  Some of us still get our haircuts a little more often, and a little closer.  We think twice before walking around town or visiting the town trash and recycling station in sloppy clothes or needing a shave, because somehow, Mac is watching.
Whenever I receive a really funny aviation joke, or a little video clip showing aviators doing something daring or stupid, I still want to forward it to Mac, if only I had his address.
Whenever there is a celebration, or a party, and there comes a time to recognize people, and to thank the host and hostess, I remember to make a small speech, and perhaps a toast.
And we may pay more attention to town politics, to volunteering, trying to make our town a little bit better.  And his spirit makes us think about the brighter side of life.

Posted by The Personal Navigator at 12:35 PM