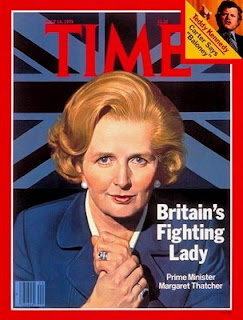 We went to see The Iron Lady, starring Meryl Streep Monday, and it was excellent, but----
Ms. Streep played ’s first female prime minister brilliantly, both as an old woman, suffering from dementia, and as a robust young leader.
Perhaps because I am 77 years old, the idea of a woman who clearly had better days, now looking back on a career that spanned most of the Cold War, now dodging in and out of reality, conversing with a husband who died a decade ago, is too close to something that can happen to any of us.
Perhaps if you are a generation younger, you would see a different film.
However, The Iron Lady for me was a fascinating film because those years were important to Americans, too.  Thatcher came in to office November, 1979, just a little over a year before Ronald Reagan became President of the .  Both the U.S. and the U.K. were deep in the Cold War with the USSR. Neither nation, I suggest, really grasped the fact that the Soviet Union was on its last legs.
usually tends to view the world, and world history, through eyes that do not admire a woman with Thatcher’s Conservative stance.  After all, this girl who grew up in the Blitz of World War II was hard on individual responsibility, tough on trades unions, and dedicated to dismantling ’s socialist framework.  Then, this is a British film.
Streep portrays a woman who is a tough, no-nonsense leader, in a country beset with violent labor struggles and with the Irish Republican Army running rampant, blowing up people all over .
Thatcher takes a determined, Churchill-like approach to the invasion of the islands by the Argentines in April 1982.  The day after the invasion the United Nations condemns the action, and three days after that the Royal Navy sends a powerful naval task force down to .
A month later, HMS Conqueror, a British nuclear submarine, sinks the Argentine light cruiser General Belgrano.  [I was interested to discover that this was the first ship ever sunk in anger by a nuclear submarine.]
I was stationed in during this war, and every day Pravda carried a story about the war, taking the anti-British side, of course.  They referred to the disputed as the Malvinas, the Argentine name for them.  They also gave Thatcher the name Zheleznaya Ledy, or Iron Lady.
The Argentines surrendered in June, 1982, and Thatcher was the toast of all . 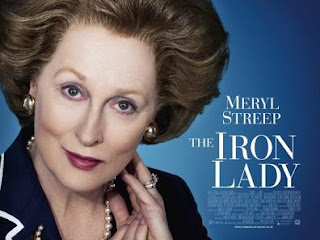 The Iron Lady is a love story, too.  Young Margaret Roberts married Denis Thatcher, a businessman, in 1951, and this film portrays a loving couple, enjoying each other’s company for over 50 years, until Denis’ death in 2002.  In the film the romance goes on after Denis’ death, because elderly Margaret, now well into dementia, sees Denis and converses with him all through her days and nights.  According to a 2008 book by the Thatchers’ daughter, Carol, all this is true.
Meryl Streep is Margaret Thatcher, in her prime, and past her prime, in this very interesting and captivating film.
Look for Streep to win an Academy Award for this. 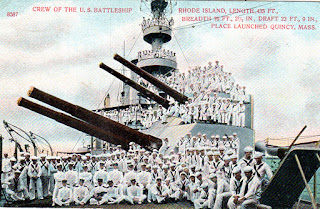 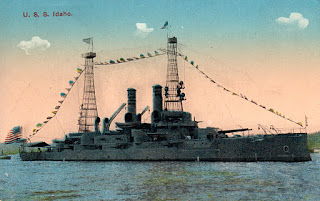 Postcard:  USS Idaho (BB-24) (Color Postcard from Great White Fleet Review in Hampton Roads, VA, 1909)   ca. 1909.  M.L. Metrochrom. 1 card            13.9 x 8.9 cm.   Color postcard shows USS Idaho (BB-24) at anchor with full dress flags from stem to stern, one of first cage masts. View is of starboard side of the battleship. was commissioned in 1908 and did not take part in the 1907-09 world cruise of the Great White Fleet, but joined them at the final Fleet Review in Hampton Roads, VA in1909. This photo is believed to have been taken about 1909. USS Idaho had a short life in the U.S. Navy-- in 1914 her crew was transferred to USS Maine in Villafranche, France, and she was turned over to the Greek Navy, and renamed HHMS Limnos. She was sunk by German bombs in 1941.  USS Idaho was result of Congressional action to limit the size and cost of new battleships. There is no message on postcard, nor was it ever mailed. Color post card, very good. (8222) $15.00. Navy/Nautical

Wally: His Cartoons of the A.E.F., Reprinted from "Stars & Stripes", the Official Newspaper of the A.E.F. by Wallgren, Pvt. Abian A., USMC            1919     Brest, France    Stars & Stripes  52 pp.   44.5 x 18 cm.    Private Abian A. Wallgren, familiarly known as "Wally" Wallgren, worked as a cartoonist for the Philadelphia Public Ledger and Washington Post before the war. He served in with the Fifth Marines of the First Division. Wallgren's cartoons appeared in every issue of The Stars and Stripes, poking fun at army life, satirizing the absurdity of army regulations, and highlighting the differences between the army brass and the frontline soldier. Numerous trips to the war front gave him material for his cartoons and first-hand experience about what soldiers considered humorous. His popular cartoons were collected in this book, published by the newspaper in early 1919.  Paperback book contains about 52 pages of cartoons printed on newsprint, very brittle. Front cover covered by transparent plastic, spine repaired with brown plastic tape. Numerous dogears and chips on pages. Poor. (8217) $50.00.  World War I/Humor

Russia: Memories of the Russian Court, First Edition, Reprinted, November 1923 by Viroubova, Anna 1923     New York, NY: The MacMillan Co.       400 pp. 14 x 20.6 cm. "It is with a prayerful heart and memories deep and reverent that I begin to write the story of my long and intimate friendship with Alexandra Feodorovna, wife of Nicholas II….and of the tragedy of the Revolution which brought on her and hers such undeserved misery, and on our unhappy country such a black night of oblivion."  The author tells of life at court in , and Peterhof, Tsarskoe Selo, Livadia and elsewhere; how the Emperor whistled for the Empress, the children, and for Viroubova. Book contains many excellent photos of the Imperial family, including several aboard the Imperial Yacht Standert.  Photos of letters from Nicholas II and his children to the author are particularly poignant. One of the last letters from the Empress was written in Old Slavonic.  Brick red decorated cloth on board, very clean and fresh. Plate showing letters in Old Slavonic is loose. Owner bookplate (William C. Bowlen, Dec. 1923) on front endpaper. No dustjacket. Very good.     (5706) $130.00. History/Russia

Posted by The Personal Navigator at 8:12 AM