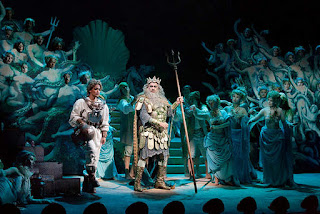 I went to see at the in Rockport Saturday.
It was a Simulcast of the live performance at the Metropolitan Opera of the World Premier of this amazing Baroque conglomeration (they called it “pastiche”) of the music of Handel, Vivaldi, Rameau and a few others, stirred elegantly with parts of Shakespeare’s plays “The Tempest” and “A Midsummer Night’s Dream.”
It was the story of Prospero, the Duke of Milan, living with his daughter on an “”, in exile.  He had banished his former lover, the Sorceress Sycorax to another part of the island, along with her somewhat disadvantaged son, Caliban.
Prospero, sung by the Countertenor David Daniels, spent his time cooking up magic spells and potions, with the help of Ariel, a “spirit” slave he had stolen from Sycorax.. Ariel was sung by Soprano Danielle de Niese, and Sycorax by Mezzo Soprano Joyce DeDonato.
The opera had everything, including multiple spells cast upon various characters, the spectacular appearance of King Neptune by Tenor Placido Domingo, complete with chorus, shipwrecks, people falling in and out of love with each other according to spells cast, spells that didn’t work out as intended, brilliant costumes, and mermaids who soar above the stage, and dancing nymphs.
I’m accustomed to and really enjoy operas that have been around a while, but this was exciting, interesting and excellent entertainment. 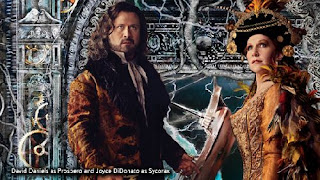 Prospero (David Daniels) and Sycorax (Joyce DiDonato)
(Metropolitan Opera photo)
When you cast yourself free of traditional Grand Opera like Aïda, Carmen, Boris Godounov, Eugene Onegin, La Traviata or La Boheme, and you envision an opera like Enchanted Island, I at once wondered who would make an opera out of the fantastic story of a ship, captained by a wild Neapolitan, hotdogging through the and rubbing her keel over the rocks of Giglio island.
I thought the Countertenor voice of David Daniels might make a marvelous Captain Francesco Schettino, and perhaps the Moldovan mystery girl could be sung by a golden haired soprano.  I can hear Francesco's aria now: "Ho Sbagliato."
Placido Domingo would be a natural for the Coast Guard Captain, ordering the Captain to go back aboard his ship.       You can imagine this scene with a chorus of waiters, sailors and passengers.
Enchanted Island, with all its spells and shipwrecks, seemed to be an excellent model for a modern-day Costa Concordia—the Opera. 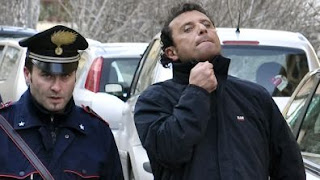 Confession of Faith and Form of Covenant of The Old South Church in Boston, Massachusetts with lists of the Founders, Pastors, Ruling Elders and Deacons, and Members 1855 Boston, MA: Crocker and Brewster, 47 Washington St. Book of history and rules of the church. Most important are contemporary handwritten notations in List of Members as of Jan. 1, 1855, with deaths and dismissals to 1857. 118 pp. 12 x 19 cm. Cloth on board, gilt printing, blindstamped design. Top piece of spine torn loose ( 5 cm.). On back, lower left corner dampstained and worn. Original owner's name written on paper on cover: Charles Stoddard, Deacon, joined 1821. (1450) $60.00. Religious/History.

Connecticut Evangelical Magazine, The; Vol. IV, Consisting of 12 numbers, to be published monthly, from July 1803 to June 1804 Williams, Nathan, D.D.; Smalley, John, D.D.; Day, Jeremiah, D.D.; Trumbull, Benjamin, D.D.; Parsons, Elijah, D.D., et al, Editors  1804. : Hudson & Goodwin Bound volume of twelve issues of Evangelical Magazine.  "Attempts to Christianize the Indians  in New-England & c." continued from the previous year.  Mention of attempts by Romish priests, which are opposed to actions of Protestant priests, include "teaching them the Pater Noster and rubbing a few beads, then baptising them."  In November 1803 issue is description of Religious exercises in the Indian Congregations, from a letter from Dr. Increase Mather in 1687.    Before he died, Rev. Mr. Atwater of wrote an Advice for his only son, William. That advice is published in the October 1803 issue.  Report of Revival of Religion in , in 1799.  "Reflections of a Youth once dissolute, brought to serious consideration" published in April 1804 issue.  484 pp. 12.4 x 21.5 cm. Whole calf on board, edges lightly worn, text block slightly fanned; contemporary signature of Elijah Loomis written three times on front endpapers, with "Cost 11/". Text block tight, slight foxing.  Good copy. (5260) $66.00. Religious/Missionary

Delights of Wisdom Concerning Conjugial Love; After Which Follow Pleasures of Insanity Concerning Scortatory Love by Swedenborg, Emanuel 1852 : Otis Clapp. 438 pp. 14 x 23 cm. This book is widely available in new reprints and electronic versions. This 1852 version contains an 1833 "Advertisement" explaining the English translation from the original 1768 Latin edition. Readers when this edition appeared in 1852 must have been amazed, because Swedenborg does not mince words. Swedenborg presents love and sex as high-minded, and altogether connected with the will of God. He teaches that conjugal (conjugial) love between husband and wife is good and extends through child-rearing and abstaining from selfishness. However, he also deals heavily with all the unfavorable, immoral parts of love and the love of sex, including "Scortatory Love" or fornication, and polygamy, jealousy, adultery, lust and consorting with harlots.  A man becomes less of a man when he surrenders himself to scortatory love. Decorated blind-stamped black cloth on board with gilt title on spine, edges frayed. Inscription on front free endpaper: "Miss Ruth H. Smith--From her affectionate pupil-- Fanny E. Loring, June 30th, '54". Text block quite clean.  Overall good condition. (2308) $59.00. Religious

Cucumbers (Heb. Kishufîm) ..Says Mr. Tristam: “On visiting the Arab school in Jerusalem (1858) I observed that the dinner which the children brought with them to school consisted, without exception, of a piece of barley-cake and a raw cucumber, which they eat rind and all.”
776 pp. 14 x 22 cm. Calf on board, front and back boards detached. Text block quite solid. Thus, poor. (3760) $29.00. Religious/Reference.

Friend of Peace, No. IV, by Philo Pacificus, Author of "A Solemn Review of the Custom of War" Worcester, Noah (pseud. Philo Pacificus) 1816 : Hilliard and Metcalf. Rev. Noah Worcester, DD (b. 1758, d. 1837) devoted his whole life to Unitarianism and the cause of peace. As a boy of 16 he fought in the Battle of Bunker Hill and was nearly taken prisoner, then fought at the Battle of Bennington, where he confirmed his abhorrence of war. In this issue: "Reasons for Believing that Efforts for the Abolition of War Will Not be in Vain." offers ten reasons, and mentions that "The impious expeditions against the Mohametans as infidels were dignified as 'holy wars'... millions of people ..perished by the hands of these deluded fanatics, or Christian barbarians."  Author prints letters he wrote to former Presidents Jefferson  and John Adams. Jefferson offers a long-winded discussion on the late war with (War of 1812), then declines to answer. , however, states that wars are as necessary and as inevitable as hurricanes, earthquakes and volcanoes. also says: "Universal and perpetual peace, appears to me, no more nor less than everlasting passive obedience and non resistance. The human flock would soon be fleeced and butchered by one or a few." 40 pp. 15 x 24 cm. Paper periodical, rough-cut pages, edges frayed, cover soiled, fair. (7288) $45.00. Religious/Pacificism

Friend of Peace, No. IX,  by Philo Pacificus; August 1816 (May be 1817) Worcester, Noah (pseud. Philo Pacificus) 1816 : Joseph T. Buckingham. Rev. Noah Worcester, DD (b. 1758, d. 1837) devoted his whole life to Unitarianism and the cause of peace. As a boy of 16 he fought in the Battle of Bunker Hill and was nearly taken prisoner, then fought at the Battle of Bennington, where he confirmed his abhorrence of war. In this issue: "The Messiah and Mahomet" -- Prince of Peace vs. Prince of War. Author notes that Goths and Vandals followed the Mohametan example, notes that the papal clergy  have encouraged men to fight their battles, and asks: "how often have the protestant clergy followed this dreadful example?"  "The Christian Religion, as Taught by the Apostle of Christ Incompatible with War"--Author suggests that the apostles "totally misapprehended the nature of Christianity... the Christian spirit and the war spirit are as perfectly opposed to each other... as virtue and vice."  "Views of an English Writer Respecting the Wars of "  Letter from dated March 17, 1817 comments on Friends of Peace pamphlets, notes evidence of the harmful effects of war by , , and .  Cowper's poem "Pity for Poor Africans" applied to War. Letter from Baptist missionary to . Letters from Peace Societies in , Cayga and . 40 pp.          15 x 24 cm. Paper periodical, rough-cut pages, edges frayed, cover soiled, fair. (7289) $43.00. Religious/Pacificism 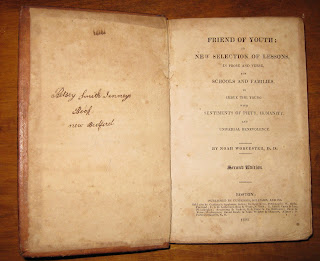 Friend of Youth; or New Selection of Lessons, In Prose and Verse, for Schools and Families to Imbue the Young with Sentiments of Piety, Humanity and Universal Benevolence.  Second Edition. By Worcester, Noah, D.D. 1823. : Cummings, Hilliard & Co. This was an influential little book when it appeared in 1822-- it had everything!  Divine Compassion illustrated by the Parables; Report of a Visit to the Loo Choo Islanders. Also, "Character of Numa Pompilius"; Fable of the Bee, the Ant, and the Sparrow." "The Smallest of Known Animals"--Animalcules. "On the Fascinating Power of Serpents"; "Influence of Education in regard to Appetites and Passions." "Influence of Education and habit on horses and dogs." "Effects and Influence of War" by Dr. Channing. "Rights and Duties of Rulers" by Rev. S. Blackslee.  Poem, "The Lord and the Judge" by Lomonosov. "Pride not made for Man" by . "Remarks on Patriotism" by Gallison. "Reflections on Fireworks" by . "Citizens of New England bound to support and correct Abuses" by Webster. Extracts from Russian Poetry by Karamsin, Bobrov. " and Ice Bergs"  "The Docility of Animals" by Smellie. "Salt Mines of , in " by Clarke.  "Dangerous Influence of Party Passions". Much more. 276 pp. 11.6 x 18.2 cm. Beautifully burled calf on board, moderately worn.  Inscription on front pastedown: "Betsey Smith Jenneys Book, ." Pages foxed. Overall Good. (1616)  $44.00. Religious/Educational

George Fox: Selections from the Epistles of George Fox, Abridged by Tuke, Samuel 1858 , PA: Association of Friends for the Diffusion of Religious and Useful Knowledge.  This is the first edition in abridged form of Samuel Tuke's earlier Selections of the Epistles of George Fox. Fox (b.1624, d.1691) is considered to be the founder of the Society of Friends (Quakers). The introduction in this small book is the same Tuke used in his earlier Selections. Fox's mission was to speak truth to all, and that truth often got him thrown into jail. When he visited he became an early champion of the Indians and Black slaves (p.38-39, 67-70). He warns against vain fashions, not to be over thoughtful of the things of this world, and urged followers to believe in the Light as Christ commanded.  114 pp. 10 x 15.5 cm. Blindstamped design on brown cloth on board, top of spine worn, dampstain to first and last pages, good. (1734) $39.00. Religious/Quaker

Gift Book for Young Ladies, Or, Familiar Letters on Their Acquaintances, Male and Female, Employments, Friendships, &c. by Dr. William A. Alcott. 1853. : Derby & Miller. "Holiness before happiness" Alcott advises. His advice to women about their health, amidst scrofula, dyspepsia and consumption, is interesting. Includes chapters on self-denial and self-sacrifice. Author continually mentions women with biliousness and other examples of poor health. Not a book to cheer up a young woman! 307 pp. 12.5 x 18.3 cm. Cloth on board, blind stamped with elaborate pattern. Slight tear in spine.(0102) $40.00. Women's.

Posted by The Personal Navigator at 5:58 PM