Starting at the Bottom In the Newspaper Business… 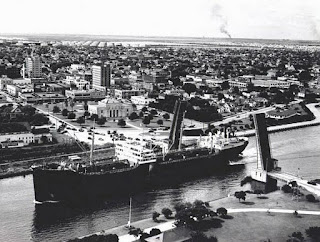 How do kids today pick the life they hope they’ll have?

When I was a kid, I    I loved broadcasting and the newspaper business, and thought my future was there.
I started in at the very bottom, as a 10-year-old newspaper boy, delivering The Port Arthur News to the section of town where I lived. Collecting the subscription fees was something I had to do each month, and this was painful, because people were not eager to part with $1.10 for their daily and Sunday paper. Sometimes they’d give a tip, which would have been about ten cents.  This was 1944, during World War II.
There were a couple of large mansions on my route, and I’d visit them only once a year, and they’d shell out the grand amount of about $12.00 plus a five dollar tip.
The day the distributor brought newspapers reporting that the war had ended was a day I’ll always remember.  Without television and cell phones and all the instant communication today, when I gave people their paper, it may have been the first word they got that our war with was finally over.  That was August 15, 1945 when the Japanese agreed to surrender, and the actual surrender was September 2, 1945.  There hasn’t been a day like that in since!  Everyone was ecstatic.

When I was about 14 I found out about these marvelous things called Mimeograph stencils. They were legal size documents that consisted of a fiber sheet that you could type on and if you remembered to type without a typewriter ribbon, it would make indentations in this fiber sheet.
Then you’d fasten this onto the drum of a Mimeograph machine, make sure it had plenty of ink, and then start to crank it around and print on sheets of paper. 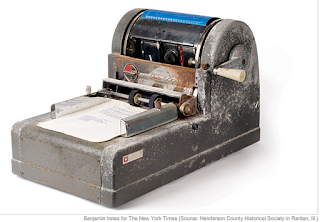 You could even make drawings on this Mimeo stencil.  This was a long way from Xerox!
We produced quite a few newspapers for distribution to the other kids at in .  Our first one was The Nitwit News.
Later I found my way to the staff of the Jr. High newspaper, and then to the newspaper, The Yellow Jacket, which was actually printed on a press at our school.
Next, as a high school senior, I got a job at The Port Arthur News as an engraver operator, which meant I operated the Fairchild machine that scanned photographs and burned dots onto plastic on a rotating drum.  These became the “cuts” used in the printing process.  I also operated the machine that received daily transmissions of United Press Telephoto.  This would be an 8” x 10” sheet filled with UP photos of newsworthy events for the day, sent down from UP in .  The editor would choose the ones he wanted, and I’d engrave them for cuts.
I also took photos for the paper, using one of those wonderful old Speed Graphic cameras with film in plastic or metal holders.  I was simply an adjunct to the regular photographer, Jimmy Everett.   Between developing the telephotos and my pictures, I spent over an hour a day in the darkroom, which was a small closet that smelled of the hypo used to stop and fix the photos.  Since the telephotos arrived sharply at noon, I would eat my lunch while I waited for the photos to dry on the photo drier.  At that time my mother had gotten into a rut with making my lunch, and usually made tuna fish sandwiches, so my darkroom smelled of a combination of hypo and tuna fish.
That may be why I still avoid tuna fish sandwiches.
I also had writing duties.  Sometimes I’d get assigned a fire or a storm to cover, or perhaps an interesting local death.  What a thrill it was to see my story, with byline, right on page one!  It only happened a few times, but it was always exciting.
Morty Goldman was a reporter at the News who typified the reporter of those days.  He was a smart, inquisitive reporter who had a way of getting statements from people that no one else could get.  He was the main attack man for the local chapter of the Newspaper Guild, the union for the editorial people.  We had strong unions for all the stereotypers, teletype operators and pressmen, and they were very serious about their union membership.  Morty tried hard to get me to join the Guild, but I never did.
The Newspaper Guild. I think one thing that made me leery of the Guild was that some of the members, especially Morty, were really nasty about management, especially about our Editor, John Ayres.  They were always spreading stories about him, and whispering behind his back. Even as a kid in high school, I saw that Guild as the very same slice of life as those kids in school who always resented someone whose parents were in the local country club, or whose parents had graduated from college, or just “put on airs.”
It seems as though some people are destined to spend their whole life resenting others, whom they perceive to have more of this or that, or have “breaks” or advantages that they never had.

Perhaps that is why I have little sympathy with the people, because so much of their language is predicated upon envy and resentment.  I have no sympathy with people who have managed to buy off members of Congress, and use money to create rules and regulations to insulate themselves from the world. But I am sensitive to the politics of resentment.
Certainly there was a genuine need for labor unions which were formed to prevent the exploitation of workers, and to enable them to achieve better wages and working conditions, and some of those features of unions are still vital today.
But the constant undercurrent of gossip, and resentment and envy that I was exposed to turned me off, because I identified with the Editor and the management staff, trying to put out a good newspaper every day.

The newsroom of this mid 20th century newspaper was a large room with a central table for the city editor,  the managing editor, the wire editor, and a couple of reporters.  At the near end of the room were the Society section ladies:  Society editor Grace Foote; and two other women.  At the far end of the room was the Sports section.  I usually sat at an empty typewriter in the Sports section.
Next to the sports section was a glassed-in room that housed the teletype machines and my telephoto machine.  It was pretty noisy, with those INS, AP and UP machines all clacking away, then at noon my telephoto machine would go “beep-beep” as the black dots would come over the telephone line.  An addition arrived during my time there, when Associated Press would send their stories on a punched tape, so our wire editor could take them right to the linotype people and they would feed the tape to a linotype machine and it would make the little slugs of type without a human at the keyboard.  In our union shop, that was not greatly appreciated.
The linotype machines and the stereotype department were all at the back on the same floor as the newsroom.  It was hot in there, with the hot lead being used to make the type, and then the slugs would be mounted in large page-size forms by the stereotypers and then a sheet of paper-like material would be placed over it and pressed to make a page.  Then this would be put into a mold and hot metal would be injected to make a cylinder that would be sent down to the press room below.
I loved every bit of this, and often spent so many hours at work that, in spite of attending school daily, I put in over a 40-hour week.
I really enjoyed my life in the newspaper world.

Let the Personal Navigator introduce you to some papers and books: 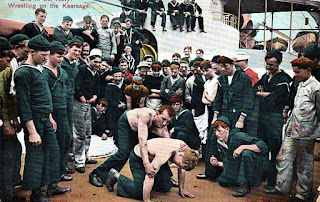 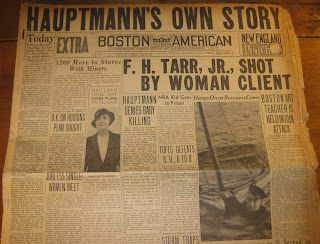 Boston Evening American EXTRA Tuesday, October 16, 1934 Headline: "Hauptmann's Own Story"    1934            Boston, MA: N.E. Newspaper Publishing Co. Headlne story: Bruno Richard Hauptmann denied on the witness stand this afternoon that he had killed litle Charles A. Lindbergh, Jr. on the night of March 1, 1932. Also: "F.H. Tarr, Jr. Shot By Woman Client" in . "Revenge Clues are Sought in Stolls' Bride Kidnapping". Dorothy Thompson, wife of Sinclair Lewis, spoke at last night about and Hitlerism. Expelled from Germany for her articles on Hitler, she told students at Northampton that the greatest menace to his rule in Germany was a "petering out" of the war-like spirit there, due in part to the fact that there were no wars to fight.       20 pp.   42 x 55 cm.       Newspaper, quite brittle, edges chipped, poor.    (8213) $20.00. Newspapers 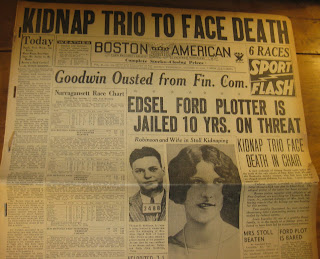 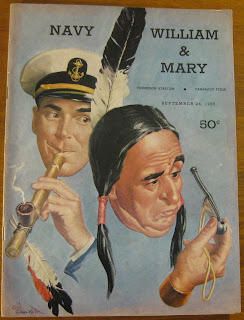 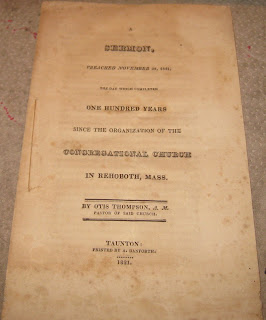 Sermon, A, Preached November 29, 1821; The Day Which Completed One Hundred Years Since the Organization of the Congregational Church in By Otis Thompson, A.M., Pastor of Said Church 1821 : A. Danforth, Printer. 23 pp. 14 x 23.7 cm. Reverend Thompson (b. 9-14-1776) served as pastor of the Rehoboth Congregational Church for over 25 years. In this sermon he takes for his text Acts IX, 31, and describes how Saul of Tarsus was "exceedingly mad against the saints of Christ Jesus: and acting uinder the highest authority in the Jewish church, shut them up in prison, punished them oft.... when they were put to death, gave his voice against them," Then, on the road to Damascus, he was "arrested by a light and voice from heaven... was changed from a blasphemer to a preacher of the faith which before he destroyed. Rev. Thompson ends his sermon with words from Christ: "He who is not with me, is against me, and he that gathereth not with me, scattereth abroad.” Paper booklet, bound with thread, moderate wear, good.    (7704) $36.00. Religious

Page of Wally's Cartoons about American Soldiers in World War I

Wally: His Cartoons of the A.E.F., Reprinted from "Stars & Stripes", the Official Newspaper of the A.E.F. by Wallgren, Pvt. Abian A., USMC    1919     Brest, France    Stars & Stripes  52 pp.   44.5 x 18 cm.    Private Abian A. Wallgren, familiarly known as "Wally" Wallgren, worked as a cartoonist for the Philadelphia Public Ledger and Washington Post before the war. He served in with the Fifth Marines of the First Division. Wallgren's cartoons appeared in every issue of The Stars and Stripes, poking fun at army life, satirizing the absurdity of army regulations, and highlighting the differences between the army brass and the frontline soldier. Numerous trips to the war front gave him material for his cartoons and first-hand experience about what soldiers considered humorous. His popular cartoons were collected in this book, published by the newspaper in early 1919.  Paperback book contains about 52 pages of cartoons printed on newsprint, very brittle. Front cover covered by transparent plastic, spine repaired with brown plastic tape. Numerous dogears and chips on pages. Poor. (8217) $50.00.  World War I/Humor

Posted by The Personal Navigator at 1:30 PM