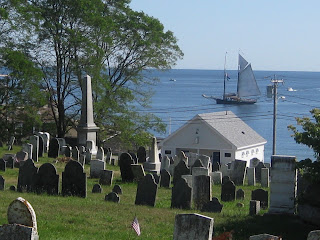 Our home is located right next to a beautiful old graveyard on a slope that goes down to a beach on the .  Richard Tarr, the founder of Rockport, grew crops here.  Then, he gave this piece of land to the young village as a burial ground. He is buried here. 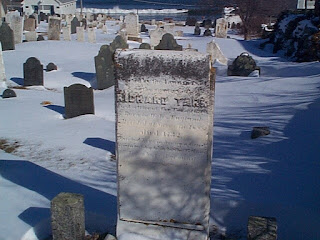 We have a lot of visitors to this old burying ground, because nearly every stone is a lesson in the history of our country.
There are men who fought in the Revolutionary War, the War with in 1812, women who lost their husbands at sea, in war and peace, and many children.
Union war dead are buried one lane away, less than 100 feet more distant from the sea.
Hannah Jumper is buried in our Old Fifth Parish Burial Ground.  She’s famous here because this quiet spinster was a woman of action.  In the middle of the Nineteenth century Rockport had a large number of sailors and fishermen, and a large number of little pubs and bars where the men would hang out.  They’d often get drunk and then go home to their wives.
This went on for years, but in 1856 the Temperance Movement was gaining steam all over the (31 states).  The women in town had had about enough of this, and the preachers downtown helped stir up their emotions.  Local women gathered and decided that on July 8th they would take matters into their own hands.  They trusted no males with their plans, except for three preachers.
On that fine summer morning Hannah, age 75, put down her sewing, and marched out of her house down by the harbor, and led a group of angry, determined women and preachers down the street. The women had hatchets under their shawls, and they stormed into one bar after another, smashing bottles, and emptying kegs in the street.  Pub owners and customers alike couldn’t believe what was happening.
The women smashed kegs for five hours. Then they went home to cook supper for their families.
That was the end of drinking in Rockport.  Bars and pubs were outlawed, and only in 2005 did citizens finally vote to allow restaurants to serve alcoholic beverages.  149 years. 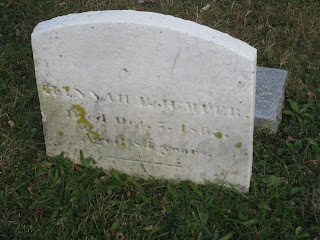 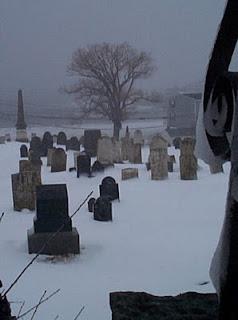 While we are on the subject of burial grounds, I’d like to tell you about a fascinating new book: 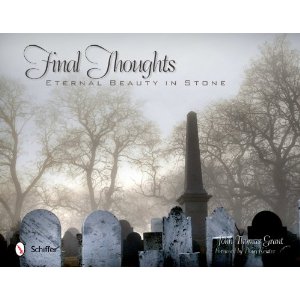 The cover illustration was one of the many magnificent photos that John Thomas Grant took for this book, which is a beautiful, thoughtful, pictorial survey of old graveyards of New England, New York and Pennsylvania.  Most are from graveyards right here on .
The inscriptions are not always dry, lofty phrases from the Bible, and sometimes they give you an insight into what the “loved ones” really thought about the departed one. 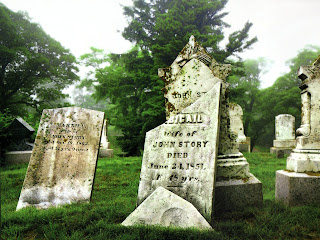 On a set of gravestones in a cemetery, author Grant found these inscriptions:

On Abigail Story’s stone--
“Grieve not for me, my husband dear;
I am not dead, but sleeping here;
with patience wait, prepare to die,
and in a short time you’ll come to I.” (1851)

On John Story’s stone:
“I am not grieved, my dearest wife
sleep on, I’ve found another wife.
Therefore I cannot come to thee,
for I must go and live with she.” (1851)

That wife, Abigail, died in 1851.  The busy John Story then married Martha, who died in 1862; then he married Mary A., who died in 1888.  I wonder if John just wanted to make his verse rhyme or was just being polite to Abigail when he wrote “with she”?

Journal, , Saturday, April 9, 1881 :  The Journal Company. The sacredness of the Sabbath is not always observed by politicians.  Last Saturday Senators Conkling and Platt, Governor Cornell, Vice President Arthur and Postmaster-General James  did not get through comparing notes until Sunday. Four years ago Conkling engaged in a power struggle with President Hayes.  "The Hero of " was not General Hancock, recently defeated in the national election by Garfield, but General Meade.  There are at least a dozen Senators who may be called millionaires, led by Sen. Fair of , probably worth as much as all the others put together.  Next is Davis of Illinois who has gathered millions, as well as 375 pounds avoirdupois. Sawyer of , who was a poor boy, is next.   The Story Teller:  "Poor Miss Brackenthorpe" --what was revealed after she died. Illustrated ads for Perry Davis' Pain Killer, The "Only" Lung Pad, Madame Griswold's Skirt-supporting Corsets. 8 pp. 40 x 58 cm.   Newspapers, numerous tiny tears in creases, paper unopened, fair. (8198) $24.00. Newspapers/History

Universalist, The; and Ladies' Repository; , Saturday, February 8, 1834 Smith, Daniel D., Editor 1834 Daniel D. Smith. Address delivered at the funeral of Matthew Jasper Smith, only child of Rev. M.H. Smith of   An Address delivered before the First Society of Universalists in at the Dedication of their church, June 28th, 1833, by Rev. L. Willis. Excuse for Neglecting Public Worship-- the fourth excuse is the expense of public worship; fifth excuse is that many can not keep awake in church. Extract from a New-Year's Sermon by Rev. T.B. Thayer. The Trial of Abner Kneeland for blasphemy ended yesterday with a verdict of guilty. Caution to Mothers, No. 1: "Do not talk about children in their presence."  "..if mothers exercise care, and proceed cautiously, they will save their children from years of woe, and adorn their handsome children with that greatest of all ornaments-- 'a meek and quiet' which in the sight of God is of great price." Hints to Young Females. "The sentiment for woman has undergone a change.  The romantic passion, which once almost deified her, is on the decline; and it is by intrinsic qualities that she must now inspire respect.  There is less enthusiasm entertained for her, but the regard is more rational, and perhaps equally sincere." 16 pp. 18 x 27 cm. Paper periodical, edges cut unevenly, good. (7382) $16.00. Religious

image
Thompson, Rev. Otis: Sermon, A, Preached November 29, 1821; The Day Which Completed One Hundred Years Since the Organization of the Congregational Church in By Otis Thompson, A.M., Pastor of Said Church 1821 : A. Danforth, Printer. 23 pp. 14 x 23.7 cm.    Reverend Thompson (b. 9-14-1776) served as pastor of the Rehoboth Congregational Church for over 25 years. In this sermon he takes for his text Acts IX, 31, and describes how Saul of Tarsus was "exceedingly mad against the saints of Christ Jesus: and acting uinder the highest authority in the Jewish church, shut them up in prison, punished them oft.... when they were put to death, gave his voice against them," Then, on the road to Damascus, he was "arrested by a light and voice from heaven... was changed from a blasphemer to a preacher of the faith which before he destroyed. Rev. Thompson ends his sermon with words from Christ: "He who is not with me, is against me, and he that gathereth not with me, scattereth abroad."     Paper booklet, bound with thread, moderate wear, good. (7704) $36.00. Religious

Seven Sermons, On Different Important Subjects; by Robert Russel at Wardhurst, in 1791 : Peter Stewart.  Small book offers sermons on:  The Unpardonable Sin against the Holy Ghost: or the Sin Unto Death; II. The Saint's Duty and Exercise: Being an Exhortation to, and a Direction for Prayer; III. The Accepted Time, and Day of Salvation; IV. The End of Time, and Beginning of Eternity; V. Joshua's Resolution to serve the Lord; VI. The Way to Heaven made Plain; VII. The future State of : Or, a Treatise on the Resurrection. 144 pp. 8.5 x 14.2 cm. Paper on board with leather spine, very worn, but intact. Inside front hinge cracked. Front pastedown contains name that is heavily scratched out. No free endpapers. Fair. (6991) $115.00. Religious

Sermon Preached August 9, 1826 at the Ordination of the Rev. Stephen Thurston over the Congregational Church and Society, Prospect, , by Rev. David Thurston of the Congregational Church. , : David Thurston, Pastor, Congregational Church.  If thou put the brethren in remembrance of these things, thou shalt be a good minister of Jesus Christ, nourished up in the words of faith and of good doctrine, whereunto thou hast attained. I Timothy, IV, 6
Sermon by famous anti-slavery preacher, David Thurston, with theme from I Timothy, IV, 6. Cites requisites for a good minister of Jesus Christ. This copy inscribed by David Thurston to his uncle, Samuel Bacon. 16 pp. 14 x 21 cm. Paper booklet, covered with coarse heavy paper. First four pages have 10 cm closed tear across middle, other pages have 2 cm tear in edge. Soiled, worn, poor. (5727) $46.00. Religious/History
[Rev. David Thurston was one of the Congregational church's most prominent ministers. Reform-minded and idealistic. He started the first Sunday school in . He was a pioneer in all matters of reform and a leader outside of his community on the great questions of the day. He formed the chapter of the American Anti-Slavery Society in 1834, and for years before the Civil War he was a leading voice in the cause of abolition of slavery. In fact, he was so strongly anti-slavery that his parishioners forced him to resign, ending a 44-year stint as pastor in .
Church members today say they carry on Thurston's message of social activism by running programs on family violence and an after-school program for middle school students. ]

Self-knowledge: A Treatise, Shewing the Nature and Benefit of that Important Science, and the Way to Attain it. Intermixed with various Reflections and Observations on Human Nature. by Mason, John, A.M. 1778 : James Buckland at the Buck in Paternoster Row. Famed Non-conformist's Treatise discusses aspects of self-knowledge; overcoming temptation; humility; abstinence; knowing our natural tempers; fervent and frequent prayer. 228 pp. 11 x 17 cm. Calf on board, top and bottom of spine, edges of cover rubbed and worn. Poem by Cowper penned in ffep in 18th c. hand. Pen marks in book mark key passages. Owner inscr. Good. (1311) $70.00. Religious/Educational/Philosophy.

Reverend Pike's Discourse Delivered in the Congregational Church, Rowley, MA at the Annual Thanksgiving, November 26, 1846 Pike, Rev. John 1846 Boston, MA: S.N. Dickinson & Co. Text from Ezekiel 21:27. Are there grounds for contending nations of the earth to regard themselves as the messengers of Deity to overturn each other? Does part of the job belong to us?  Preacher is talking about the current war with , and also British aggression in , and French encroachments upon islands of the sea. Our war with urged on by land speculators, slave-holders and selfish adventurers..."What evidence that the voice of God was calling us beyond the river ?  Was admitting to the constitutional?  was looking up to us... But we chose the sword... And now they burn with hatred towards us.  Pray for your nation, and the kindred nations....a voice more acceptable to heaven than the roar of your cannon." 15 pp. 14 x 23 cm. Paper leaflet fastened with thread stitching. Chip 2 x 3 cm missing from one page, some soiling, fair. (7422) $17.00. Religious

Posted by The Personal Navigator at 5:05 PM