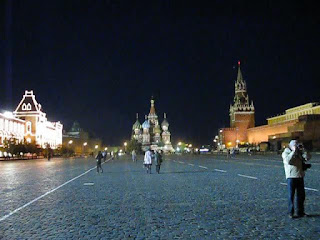 We were spending our first Christmas in the , a country that didn’t seem to pay much attention to such things as “Christmas”.  It was 1981, and Leonid Brezhnev was General Secretary of the Communist Party.
Lenin, and Stalin and all the Communists never were able to wipe out Christianity in the .  I always had the feeling that many of the most dedicated communists still had buried deep in their psyche a rich religious tradition.
At Christmastime we attended Russian Orthodox religious services, which were beautiful, with priests wearing splendid robes, incense, and chanting parishioners.
Karl Marx wrote dismissively about religion*, but deep into the Communist era, we observed devout Communists using words that showed that it was still a part of them.

*“Religion is the sigh of the oppressed creature, the heart of a heartless world, just as it is the spirit of a spiritless situation. It is the opium of the people. The abolition of religion as the illusory happiness of the people is required for their real happiness”  Karl Marx, Critique of Hegel’s Philosophy of Right

Many Russians never dismissed religion, and so when the disappeared, and new emerged, back came all the priests and churches, and the faithful, as if they had never left.
Our maid, whom we figured was a Major in the KGB, and was assigned to report on all of our doings, had her husband, the plumber at the East German embassy, find us a Christmas tree.  It was a rather pitiful tree, but we appreciated their thoughtfulness.  Ludmila may have been a KGB agent, but she was a wonderful woman, and we learned a lot about life in  from her.
Our middle son, Mark, had spent the last several months living with us in , and our daughter had been attending high school at an American school in .  She arrived by air from . 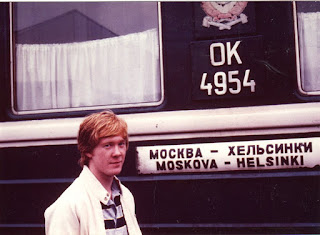 Son Mark at the Train for

Leningradsky Vokzal (Station). Our oldest son John and his friend Ned Walsh, both seniors at  of , had been conducting a low-cost, backpacking trip across Europe for several months, and the plan was for them to arrive by rail in  three days before Christmas.  However, we had not heard from them for several weeks.
This was before cell phones and email. However, surrounded as we were in the  with much uncertainty, we didn’t think there was much of a chance that the two college boys would actually make it across the Soviet frontier by the overnight train from , on time.
It was snowing lightly as we walked through Leningradsky Station.  has 14 train stations, most of them large termini for trains going to destinations all across the country. This station was for trains between ,  and  and other points in the far north.  Across the street was another rail station, for the Trans-Siberian Railway.  Other stations around the city served , ,  and the rest of , and so on. 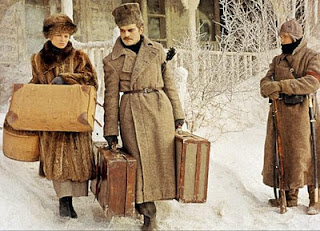 Russian train stations were pretty much like a scene from “Doctor Zhivago”.  Grim-faced travelers with huge, heavy bags.  The women often wearing babushkas and the men wearing wool hats, or fur shapkas, but you’d also see a few Turkomans or Khirgiz or Uzbeks or Tadzhiks in their native dress.  Then there were the drunks. Large stations had a room where they would put the very drunk men seen staggering around the station, and you could look in where they were jammed in so tight they could hardly fall over.
We reached the track for the train from  and shortly the train chugged in, and the people poured off.  They were mostly Soviet citizens, but there were a few international travelers, including young people with back packs. There were also Soviet soldiers and sailors.
But no John or Ned!  We began to wonder how in the world we would catch up with them.  With everyone off, the train began to back out, to go over to another location to get cleaned up for the return trip. 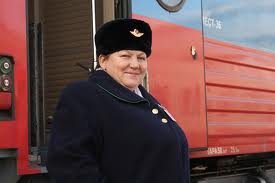 Then, just as the train started to move faster, our son and his friend jumped off, with all their backpacks and jackets flying after them.  One of the sturdy, officious Soviet women who ruled the trains with an iron hand had found these two laggards still asleep in their compartment!  The boys had thought they had another 12 hours to travel. She booted them off unceremoniously.  Welcome to !
We gathered the boys and their belongings and rushed them back to the Embassy, and Christmas.
Chinese General Decorates our Tree.  We had a Christmas party, and one of our guests was the Chinese Defense Attaché, a large, burly man who resembled Mao Ze Dong.  Chinese military did not wear insignia of rank, but we figured this guy was about a Major General.
He brought for a gift a very beautiful set of Christmas tree ornaments made with bright colored feathers, and he insisted upon putting them on our tree himself.  He was as excited as a little boy doing that!  We still cherish those ornaments today, 30 years later.
At that Christmas party we also had the Swedish, British, West German, Japanese, Italian, French, Turkish, Norwegian, Canadian attachés and wives, officials from , , , , our Ambassador, and other Americans.  But no Russians, as our government was showing the  our displeasure at their invasion of .
It was a good Christmas. 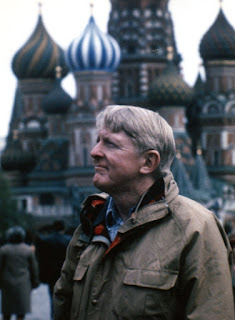 [The foregoing Blog was originally published June 20, 2011.  It has been modified for re-posting for Christmas, 2011.]

Here are a few books and papers from The Personal Navigator:

Ginx's Baby: His Birth and Other Misfortunes. A Satire. By anonymous (Edward Jenkins?) 1871 Boston, MA: James R. Osgood & Co. Poor Ginx and Mrs. Ginx keep having babies and the Queen sends £3 when they have triplets, and £4 when they have quadruplets.  Thirteen is too much, and so Ginx offers to drown the little boy. We meet Sister Suspiciosa, and the suggestion that Mrs. Ginx should consecrecate her breast milk.  She's  a protestant, though. There's Adolphus Stigma and Dignam Bailey, Q.C. and the conflict of Popery and Protestantism on the Queen's Bench. This is a nice piece of satirical humor, showing the ridiculous extremes to which well-meaning (perhaps) people may go. [Note: Author anonymous, but generally considered to be Edward Jenkins.] 125 pp.+ adv. 11 x 16.6 cm. Brown cloth on board with gilt decorated title.  Spine torn in two places, over 3 cm. Text block clean and tight. Good. (2735)  $21.50. Humor/Educational

My Wife's Fool of A Husband, illustrations by True Williams by , August 1890 : American Publishing Company Author has a marvelous wit-- his story of his life is funny a century later. 471 pp. 15 x 23 cm. Cloth on board, cover soiled, lightly frayed, inside front hinge partly torn. Fair condition. (1819) $30.00. Humor/Biography. 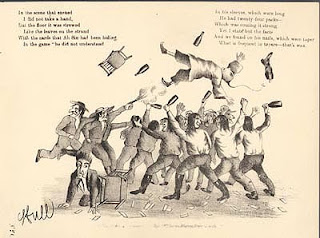 One of drawings from Hull's set shows melee against the "Chinee", above

Plain Language from Truthful James (The Heathen Chinee) by Francis Bret Harte (1839-1902); , 1870
Collection of nine drawings by Joseph Hull, published by the Western News Company, , 1870.  This collection dramatizes the racial prejudice against Chinese brought to to work on the railroad in the 19th century.  Note the eighth drawing in the series, showing an all-out melee against the “Chinee”. Nine prints, matted. 20 x 25 cm. Set of nine prints, matted in blue cardboard matting. Title card is not present. Lightly soiled. Print No. 6 has 1 x 1 cm tear in lower left hand corner. Good.(7093) $85.00. Humor/Poetry..

Rejected Addresses: or the New Theatrum Poetarum,  Tenth Edition 1813 : John Miller, 25, Bow-Street.  Collection of bizarre "addresses" on the occasion of the reopening of , completely rebuilt after a fire. Funny, disrespectful, shameless humor.  It is interesting to see how much of this is still funny, nearly two centuries later!  In "'Hampshire Farmer's Address"  there's reference to cheap soup: "soup for the poor at a penny a quart, ...mixture of horse's legs, brick dust and old shoes." ' is a large earthen-ware pipkin.  John Bull is the beef thrown into it. Taxes are the hot water he boils in. Rotten boroughs are the fuel that blazes under this same pipkin..." 127 + 5 pp. adv. 10 x 16.2 cm. Quarter leather, marbled boards, worn. On front pastedown is bookplate (oriental motif)  of Russell Gray pasted over fine signature of Henry Wilkinson, and on front free endpaper is name, "Russell Gray 1883--" [Russell Gray was Associate Justice of the Supreme Court, noted for his ruling granting citizenship to the children born in the U.S. to Chinese immigrants working on the railroads.]  Good. (5246) $30.00. Humor

English Traits, by Emerson, Ralph Waldo 1876 , MA: James R. Osgood & Co., Late Ticknor & Fields  and Fields. Osgood & Co. This is Emerson's frank and tart assessment of the Englishman.  He calls on Coleridge and gets a blast against Unitarianism. He visits Wordsworth and gets an assessment of :  No class of gentlemen (a class of men of leisure),"too much given to the making of money."  Emerson discusses "Race" vis-à-vis the British, and also Arabs, negroes, French and others. Then he discusses "Ability", and "Solidarity". "Character"-"-the British are reputed morose......they are sad by comparison with the signing and dancing nations." He also discusses Aristocracy, Literature, Universities and makes a special trip to , and discusses that. His overall assessment of the British is quite positive. . 312 pp. 12 x 18 cm. Beige cloth on board, blindstamped design with gilt title, slight wear to heel and toe of spine; small nameplate "Clara Hersey, 315 Walnut Ave." on front pastedown.  Very good. (1789) $22.00. Literature/Travel 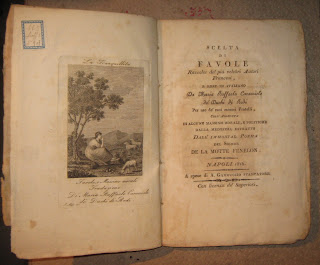 Posted by The Personal Navigator at 1:27 PM