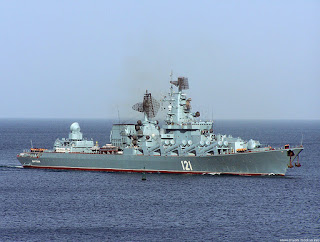 Soviet Missile Ship Moskva at sea in the Mediterranean, ca. 1976
The Navy ordered me to , to coordinate the search and tracking of Russian submarines operating in the .  It was 1975 and the Cold War was in full swing.
The Mediterranean Sea was a seven-ring circus for the Navy, because the whole war of threats and counter-threats between the and the played out here, every day.

I was going to a job conducting around the clock airborne surveillance of the .  At the time, the Israelis and all the Arab countries around them were in a state of tension.  Pretty much like today, except in those days, the Soviet Union backed the , most African states, , and the , as a part of NATO, had bases in , , , and . Like today, we backed in their confrontation with their Arab neighbors, and the Soviets. There were many more little alignments, but always with the Russians taking one side and the Americans the other.
We were a part of the Sixth Fleet, operating in the .  That force included two aircraft carriers, numerous destroyers, cruisers, patrol craft, ammunition and fueling ships, land-based air patrol craft, and submarines.
The Soviets also deployed a fleet of missile cruisers, destroyers and submarines in the .
Today, with the benefit of hind-sight, it is hard to imagine the tension between all these ships and aircraft operating here, but when you consider that both sides went to sea loaded with all kinds of nuclear and conventional weapons, and even a small misunderstanding between forces of the or the could have disastrous consequences. And--  all those client states were continually cooking up minor and major incidents that could drag the whole world into war.
My job was to use my experience in submarines and destroyers to work with naval aviators in searching for Russian submarines.  We employed land-based maritime aircraft and airborne early warning planes, and we coordinated with the antisubmarine elements aboard the carriers, and their escorting destroyers.  We shared our headquarters with the staff that coordinated American and NATO submarine operations.
Often I would fly out to , , or to , where our aircraft were based, and join them on one of their 12-hour missions.  Sometimes I’d be taken on a COD (carrier onboard delivery) plane to land on one of our carriers, to take part in a coordinated antisubmarine warfare operation, which involved Sixth fleet carrier aircraft, our land-based patrol aircraft, as well as destroyers and submarines, all tracking a Soviet submarine, with or without the interference of the Soviet surface warships in the area.
Our submarine crews became quite skilled at picking up a Soviet submarine out in the Atlantic and trailing him into the .  Sometimes we’d organize a squadron of destroyers with sophisticated towed sonars aboard, and they would coordinate with our submarines and aircraft to track the Russian.
At times Soviet surface warships would show up and get right in the middle of our tracking operation.
One day we were conducting a large operation that used carrier-based air, destroyers and land-based air to track a Soviet nuclear missile submarine. This type of submarine carried anti-ship missiles, and the Soviets positioned them to attack our aircraft carriers.
We had tracked him to the Central Mediterranean, just west of Crete and south of western .   One of our towed array frigates, USS Voge (FF-1047) was tracking him closely when sailors on the frigate noticed that the submarine had popped up and was behaving like a porpoise, speeding, still submerged, but with her periscope sticking up, and then part of her sail.  She was heading right at the frigate!
USS Voge displaced about 2600 tons, but this submerged monster displaced as much as 5700 tons, and she was traveling at a speed of about 18 knots.
Here’s a photo someone aboard Voge shot, just before the submarine collided:

Photo taken from deck of USS Voge as Soviet submarine
collides at sea off , Aug. 28, 1976 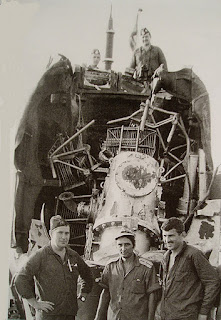 You can see considerable damage to the sail of the Russian submarine, and there was also damage to the hull of Voge, so she had to go into drydock in shortly afterward.  One sailor aboard Voge was injured.

Some fine people will read the foregoing here in the year 2011, and say, “how stupid you all were to be playing with the lives of all of us like that!”   Since the Cold War began right after World War II ended, up until the collapsed in 1991, we lived in a world of continual tension.
The Soviets tried very hard to grab up as much territory as they could as World War II ended, and countries that they couldn’t swallow up then they worked hard with elements in those countries to create Communist regimes.
We had just defeated , and to keep ourselves from being swallowed up by fascist forces, and now the Communists wanted to take over the world.
They had a lot of successes, and if we had ever “relaxed” and let the Russians, the Red Chinese, and the communist states in Czechoslovakia, Viet Nam, Cambodia, Laos, Bulgaria, Yugoslavia, Albania, Rumania, Cuba, Poland and elsewhere have their way, they might have succeeded.
We weren’t “playing”, and neither were the Russians.

Here are some books and papers that The Personal Navigator would like to offer you: 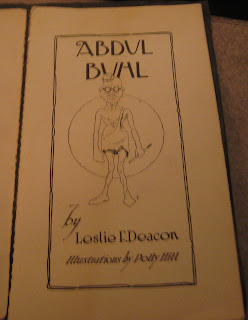 Abdul Buhl: The Chronicles of Abdul Buhl by Leslie F. Deacon, Illustrations by Polly Hill ca. 1948.  These are the timeless adventures of Abdul Buhl the terrible, and Morbhid Dhung, his man, told in verse.  Charmingly illustrated by Polly Hill, Adul and Morbhid cross a desert, go out to sea, meet some Amazons, including Sweet Ahlmad Buhl, from Abdul's clan. They encounter Whirling Dervishes, Attila's Huns, sail back over the sea to Araby the Fair.  [Author believed to be the same L.F. Deacon b. 1913 who served in the RAF in World War II and taught at Tanglin in Singapore after the war, then moved to Northern Rhodesia (now Zambia) and then South Africa.] 23 pp.           13.5 x 23.8 cm. Green suede leather cover, text block loose from binding, poor. (8200)   $39.00. Poetry 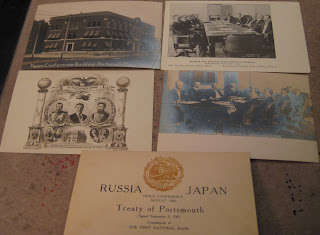 Boston Weekly Journal, Boston, Mass., Thursday Morning, February 25, 1869    Boston, MA: Charles O. Rogers, 120 Washington St. Dispatch from St. Louis reports that all of the Kiowas except four or five lodges have come in to make peace, and will at once be assigned reservations. Kiowas have been the most troublesome and hostile of the frontier tribes. Part of the Arapaho and tribes have also presented themselves at the Government headquarters for assignment ot reservations. Gen. Cushing met with success in negotiations with the Government of Colombia for the right to construct an inter-oceanic canal across the Isthmus of Darien. Discussion about the way that the President-elect, General Grant, is going about forming his Cabinet.  Meager information from indicates that troubles there are daily becoming more serious, and both the Spanish government and Gen. Dulce have misapprehended the extent and true nature of the outbreak.  Bands of insurgents are making their appearance in every part of the island.        4 pp.     52 x 68 cm. Newspaper, worn, dampstained, good. (8197) $25.00 Newspapers/History

Journal, , Saturday, April 9, 1881 :  The Journal Company. The sacredness of the Sabbath is not always observed by politicians.  Last Saturday Senators Conkling and Platt, Governor Cornell, Vice President Arthur and Postmaster-General James  did not get through comparing notes until Sunday. Four years ago Conkling engaged in a power struggle with President Hayes.  "The Hero of " was not General Hancock, recently defeated in the national election by Garfield, but General Meade.  There are at least a dozen Senators who may be called millionaires, led by Sen. Fair of , probably worth as much as all the others put together.  Next is Davis of Illinois who has gathered millions, as well as 375 pounds avoirdupois. Sawyer of , who was a poor boy, is next.   The Story Teller:  "Poor Miss Brackenthorpe" --what was revealed after she died. Illustrated ads for Perry Davis' Pain Killer, The "Only" Lung Pad, Madame Griswold's Skirt-supporting Corsets. 8 pp.           40 x 58 cm.       Newspapers, numerous tiny tears in creases, paper unopened, fair. (8198) $24.00. Newspapers/History

Shipmate, The Eyes and Ears of the Navy; Publication of the Naval Academy Alumni Association, September 1945         1945 , Harry W., Managing Editor. , : Naval Academy Alumni Association. Victory and Industrial Issue: End of World War II came as a surprise to editorial staff, so they rushed to include "The Sinking of the Rising Sun" by Lt. S.L. Freeland. "a concise and vivid report of how Navy made Japs wish they had never thought of ." Story of new USNA Superintendent, first Naval Aviator to take post, Vice Admiral Aubrey W. Fitch, '06, by Comdr. Louis J. Gulliver, '07. "Ships from the Texas Plains" story of ships built by newcomers to shipbuilding in . These ships passed the "final examination" when they survived the horrible typhoon off in December 1944, that caused sinking of three other destroyers. "How the Seabees Transformed Tinian" as base for Superforts bombing . "P.H. to Okinawa"-- "’The Big E’, carrier Enterprise, fought the whole bloody war, and came out asking for more”. "What's the Dope" news of alumni, first entry is from Col. Harry Hawthorne, Class of 1882.  Names of naval officers mentioned in this issue is an honor roll of naval heroes of World War II and afterward. 104 pp. 21.7 x 29.3 cm. Magazine, moderate wear, good. (6229) $35.00. World War II/Naval

Posted by The Personal Navigator at 2:44 PM