The turning point of the war in the Pacific 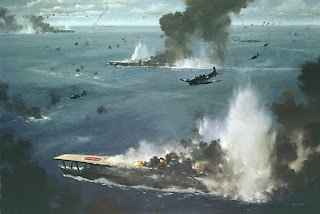 You almost feel like you are there, standing on the flight deck as one after another Wildcat fighter takes off to fight the Japanese Zeros in the air over a Japanese carrier.
Craig Symonds takes you to the dark days of spring, 1942, just a half year since the Japanese naval force bombed .
After December 7, 1941 the Japanese swept across the western Pacific, destroying American and allied forces, and capturing and occupying bases and islands from the Philippines to Burma.  The Japanese were a terrible firestorm across Asia, just about to leap to .  Would they attack the American mainland next? 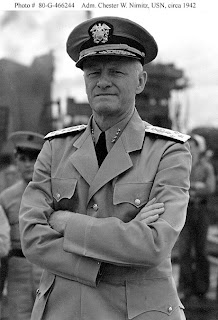 Right after the attack on Pearl Harbor, President Roosevelt sent an old submariner, Admiral Chester W. Nimitz, to to command all the naval forces in the Pacific.  Nimitz arrived on Christmas day, 1941 and surveyed the damage from the Japanese attack.  His first response was surprisingly positive, because he noted that, despite the destruction of several of our battleships and other ships in port, the Japanese had failed to destroy American fuel supplies, or industrial facilities and all our aircraft carriers had been elsewhere when they attacked. Those carriers would live to be the nucleus of the Navy that would go to war with .
Japanese Admiral Isoroku Yamamoto decided it was time to force a battle with the Americans and destroy our remaining aircraft carriers.  He planned to invade the tiny of , just 1000 miles north of Oahu, and at the same time, some of the outer islands of the Aleutian chain of .  These would make nice stepping stones as approached Mainland .
You are present at staff meetings of the Imperial Japanese Navy as they discuss Yamamoto’s plan, overcome objections, and get the Emperor’s approval.
You are also present aboard the carriers where some of ’s finest young naval aviators are learning how to fight a war when Japanese and American forces clash in the waters near , in the of the May 7-8, 1942.
Symonds brings you along as Americans and Japanese fight, and for it is a wonderful Victory parade of one success after another.
However-- Americans have been breaking the operational code of the Japanese Navy, so they are able to piece together messages which lead them to discover that the main force of the Japanese Navy will be in the vicinity of early in June, and attack the island and occupy it.
As June 4th, 1942 dawns, Navy, Army and Marine Corps aviators from Midway search for the Japanese, and then launch bombing raids.  They score no hits.
Next come torpedo attacks by squadrons from three American carriers.  They score no hits, but the Japanese cut them to pieces, so few torpedo bombers make it back to their carriers.
There’s a “Flight to Nowhere” when the commander of the air group from USS Hornet leads his aircraft on a course 35 degrees north of where they should be going, and it turns out to be the first of many failures by Hornet and her aircraft in this battle.
The Japanese are mauling our aircraft as squadron after squadron attacks them, without scoring hits.  It looks bad for our side.
Then, our dive bombers arrive on the scene with 1000-lb. and 500-lb. bombs and attack the carrier Kaga and bombs tear into the flight deck and down into the hangar deck, where bombs and torpedoes loaded aboard airplanes detonate.
More dive bombers attack Akagi, the flagship with Admiral Chūichi  Nagumo aboard, and soon that carrier is burning from stem to stern.
Dive bombers from another squadron attack Soryu, placing her out of action as well. 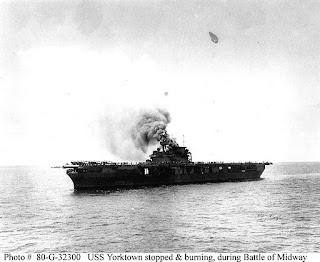 The Japanese are now reduced to only one carrier now: Hiryu.  Bombers from that carrier search out the American carriers and find USS Yorktown and attack her.  The Japanese submarine I-168 finishes her off with two torpedoes.
Aircraft from USS Enterprise and Hornet launch to attack Hiryu, and soon the Japanese have lost all four of the carriers of their main force.  The Americans have lost .
In just one day, the tide turns in the Pacific, and from then on, the Navy is on the offensive, and the Imperial Japanese Navy will never recover.  There will be three more years of bitter fighting, and many men will be killed and wounded on both sides.  The Battle of Midway was as important in World War II as the Battle of Trafalgar in 1805 when defeated the French and the Spanish fleets.
Symonds’ Midway is colorful and fast-paced, and his narrative flows with the characters who fought this battle, both the heroes and the others.
The lessons of Midway for naval officers of our generation were many, and I believe future naval officers will be studying those lessons long into the future. 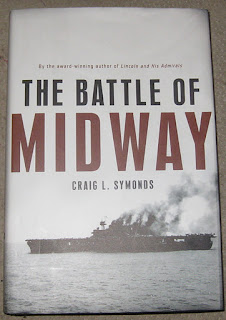 Craig Symonds is a brilliant naval historian.  I first met him when he was a professor at the and I was an instructor in the naval warfare department.  He continued his career teaching naval history at the U.S. Naval Academy, and was well known for his specialty, the naval side of the Civil War.
Recently Craig retired, then came back to occupy the Naval Heritage Chair at , an endowment of the Class of 1957.  My classmates and I from 1957 contributed to endow this chair for our 50th anniversary gift to the Academy, and we’re proud of each of the three fine scholars who have occupied that chair since 2007, and particularly proud of Craig.

When we arrived at and became Plebes in 1953, only 11 years had elapsed since Midway. Among the many bits of naval lore we were expected to spout off whenever asked by an upperclassman was “Kaga, Akagi, Soryu and Hiryu” --- the four Japanese carriers that were sunk at the Battle of Midway.
All during my naval career I felt the proximity of the heroes and key actors of the Battle of Midway.  Several of the flag officers I knew when I was a young submarine officer had served aboard submarines at Midway.
I took command of the destroyer, USS  McCaffery, at Midway in 1972.  We had stopped for refueling before we continued on to , , on our way to take part in the last months of the war.
I relieved Captain Gene Lindsay as Commander of Fleet Activities, .  Gene’s father had commanded one of the ill-fated torpedo bomber squadrons at Midway, and died in that battle.  , the base I commanded, when it had belonged to the Imperial Japanese Navy, had been commanded by Admiral Chūichi Nagumo, the commander of the Carrier Attack Force at the Battle of Midway. He had also commanded the force when it attacked .
Early in my tenure at I hosted members of the Japanese Diet as we flew aboard USS Carl Vinson for flight demonstrations at sea.  One of those Diet members in 1983 was Minoru Genda, the bright young naval officer who had planned the Japanese naval strike on , and then helped plan the Midway operation. I sat next to him as we had lunch with Admiral Sylvester Foley, CINC Pacific Fleet, aboard the carrier.
A lesson from Midway: Let us always keep our Navy ready for the next war. Not the last war, but the next. 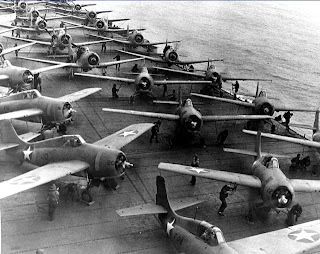 The Personal Navigator offers these books and papers about World War II:

Jane's Fighting Ships, 1942 [Issued June 1943] Founded in 1897 by Fred T. Jane, 46th Year of Issue 1943  McMurtrie, Francis E., A.I.N.A., Editor. : The MacMillan Co.  Forward to this book notes the tremendous difficulty of preparing this edition, with secrecy on part of combatants and neutrals, efforts to obscure or propagandize, and ships being sunk daily. Frontispiece photo of HMS Exeter, Royal Navy cruiser that bore the brunt of action with the German "pocket battleship" Admiral Graf Spee at the of the Plate on December 13, 1939. Text notes that, while the Graf Spee was scuttled, was completely refitted and returned to combat. She was sunk by Japanese air attack at the of the in 1942. This fascinating real-time record of naval action in World War II shows the ships that survived the Japanese attack on (Dec. 7th, 1941), even noting changes to them as result of repairs after the attack. Also with 62 pages of advertising for everything you need to outfit a warship. 582 pp. + 62 pp. adv. 31 x 20 cm. Light blue cloth on board with gilt lettering. Edges worn, tiny white paint spots on cover, good. (6985) $106.00.  Naval/World War II

Posted by The Personal Navigator at 6:37 PM