Our life in Naples, Italy 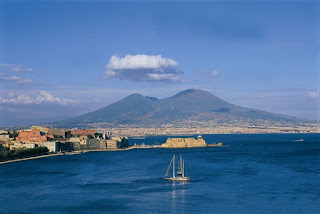 When Italian friends heard we were going to to live, they’d say, “Oh, in beautiful ( è bella!) … but don’t look down!!”

I had just graduated from the in , and my next assignment was to serve on a navy staff ensconced near a race track in .
I had served on a ballistic missile submarine operating in the Mediterranean, and on a destroyer, from the Black Sea to Gibraltar, but now I was going to be stationed in , looking after Navy patrol aircraft flying all over this part of the world, keeping an eye on the Soviet Navy, and especially Soviet submarines. It was 1975.
We had been living in , , and now the kids were uprooted, as we had been three years before in , to live overseas.  John was now 17, Mark 14, and Susan 11.
Most Americans in the service overseas want to cluster together with their own kind, and as near as possible to an American commissary, where they can buy Wonder Bread and real American lettuce.
We had enjoyed living surrounded by Iranians in , and we looked forward to experiencing the real now in .  We arrived in the summer, and found ourselves in the San Germano Hotel, in a nice part of northwestern , with Roman ruins and sulfur baths all around, on the road to .
And as for Wonder Bread, who would choose that over wonderful, fresh-baked Italian pane?
Right across the road from our hotel was a permanent station for Neapolitan prostitutes.  They usually sat on a stone wall, and so the most notable of these ladies was one named “Humpty Dumpty”.  Humpty was a generously proportioned lady of about 60.
Neapolitan prostitutes were famous all over . At night, Humpty and her associates illuminated their presence, and kept warm, by a burning truck tire.  They might also use the fire to cook pots of pasta and sauce. A spaghetti dish, Spaghetti alla Puttanesca, was named after them. 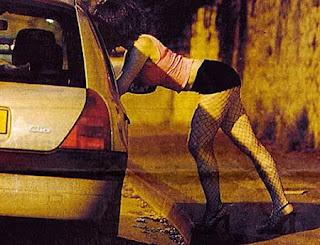 Neapolitan business transaction
We began our search for a place to live just before the month of August.  We soon found out that nothing—absolutely nothing—happens in August, except every Italian goes on vacation, and those who own a car pile their family and all the food they will eat for two weeks in and go somewhere else, usually the seashore.
Half of starts on vacation on the first of August, and the autostradas are clogged with long streams of Cinquecentos, as they all start at the same time.  Then, on the 15th of August, these all return home, and the other half start on their Ferroagosto vacanze. 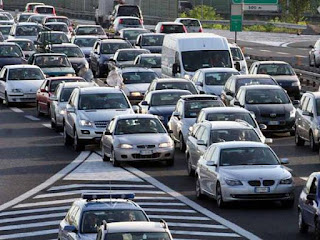 Ferragosto—no one gets there fast

For Americans looking for a place to live, apartment hunting in August is impossible, because Neapolitans are either on vacation or thinking about vacation.
So, for a whole month we lived in Camping Averno, a resort place with little cabins.  We stacked our 14 suitcases and three kids in this little hut, and I went off to work, and Marty, against all odds, went looking for a place for us to live.
There was a nice swimming pool at the Camping, so our kids enjoyed a whole month of hanging around the pool with vacationing Italian kids.  They all learned a lot of Italian, and the Italian kids learned some English.
In the meantime, I was learning about my job, which was running an operations control center, sending maritime patrol aircraft (P3Vs) and electronic surveillance aircraft on daily patrols all over the .  We also interacted with staffs aboard the two aircraft carriers in the , as they flew their missions, and I often flew on missions to track Soviet submarines or visit aboard a carrier for a few days during antisubmarine operations. 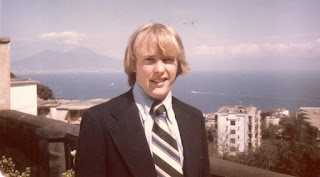 Our son John on our balcony, with Vesuvius and in background
We finally found a nice, modest apartment on the top of a five-story palazzo, or apartment building, on Via Manzoni in Posillippo, which is an old, elegant part of , with many fine old homes over 200 years old.  Our apartment had balconies on three sides, and a large roof garden behind.  From our various balconies and garden we could look out over all , including the huge soccer stadium at Fuorigrotta, at , the whole of , on around to , , Capri, Ischia, Procida and the .
Our neighbors were all 100% Italian, and most spoke little English. Across the street was a building that had once been the home of Enrico Caruso, and there were good stores for bread, sausages and vegetables nearby. 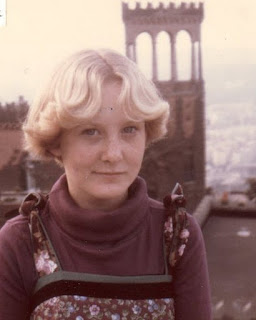 Daughter Susan with Caruso’s Castle in background
Beyond that is Fuorigrotta, and in distance, Gulf of Pozzuoli

When you move into an apartment in , there is no kitchen sink, stove or refrigerator, and in the bathroom you step back in time, with a tiny water heater, and a small bathtub and lavatory. We also found that, upon moving in, we inherited Vincenzo, a master carpenter, or so he said.  We thought we were hiring him to install a large set of shelves in our kitchen, because there were no closets or other places to store dishes or food, or anything else.  However, Vincenzo felt that he had joined our family for full employment, so he kept thinking up things we needed to have built.  Vincenzo was very nice, he could tell stories all day long in fairly good English, he knew everything about , but after a while he got to be awfully expensive.
We experienced a leak in our bathroom, so we called the local Idraulico, or plumber. He arrived in a nice suit with no tools, and asked if we had a wrench, and then a hammer, and so forth, until he had assembled enough tools to work with.  Before we knew it, he had cut a foot wide hole in the bathroom floor, and we found ourselves looking down at our landlady, Signora Guarino, sitting on her toilet.
It was Christmastime, we had planned a family trip to , so we left our ventilated bathroom for a few days to take the train north for three days of viewing one church or museum after another, with wonderful Florentine food in between.  When we returned, our bathroom was fixed. 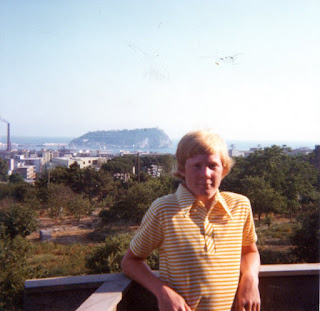 Son Mark from our roof terrace with in distance.

Naples was – and is – bella, or beautiful, but when we lived there, street cleaning was a bit casual, or a strike was underway, and Neapolitans didn’t seem to mind trash all over the streets, because the 360 degree view was so spectacular.  That was why everyone warned us, “Don’t look down!”

Here are some books and papers that The Personal Navigator would like to offer you:

Care and Feeding of Children, The; A Catechism for the Use of Mothers and Children's Nurses by L. Emmett Holt, M.D., LL.D., Professor of Diseases of Children at Columbia University, Third Edition, Revised and Enlarged. 1905 : D. Appleton & Co. After eight years of constant use, Author's aim is to give much fuller treatment to infant feeding. Section on infant feeding has been entirely rewritten for the Third Edition (1903).  Care of children: bathing, eyes, mouth; skin, clothing, napkins, nursery, airing, weight and growth development, dentition. Feeding, including nursing, weaning, artificial feeding, selection and care of milk used, refrigerators, modification of cow's milk, food for early, middle, later months.  Preparation of cow's milk at home, sterilized milk, pasteurized milk, food formulas. When to take a baby out for an airing.  Infant feeding. Mothers who have had tuberculosis should not nurse their babies. Weaning children from the breast; from the bottle. Modification of cow's milk.  Common mistakes in milk modification. Kissing infants  -- tuberculosis, diphtheria,  and many other grave diseases may be communicated in this way.  Colic, Earache. Croup. Convulsions. Rubella. Scarlet fever. Chicken-pox. Scurvy. Constipation. Diarrhœa. Bad habits include sucking, nail-biting, dirt-eating, bed-wetting and masturbation. 149 pp. + adv. 12 x 17 cm. Olive green cloth on board with gilt lettering, minor rubbing, edge wear, good. (5248) $18.00. Women's/Child care 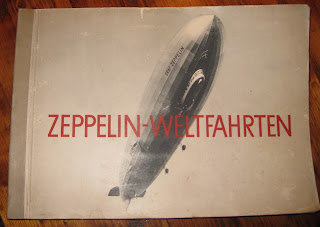 Posted by The Personal Navigator at 7:26 AM