A Trip to Cambridge and the Remarkable Karl Guthke 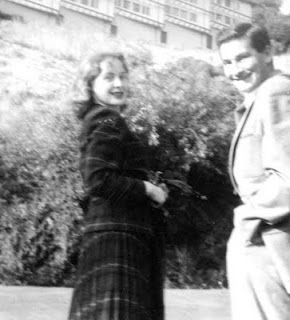 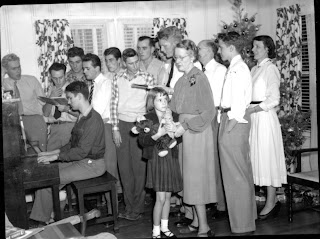 German students and Texas hosts singing Christmas carols, Port Arthur, TX, 1952
Our family included Karl in trips to McFadden beach, on the Gulf of Mexico, a few miles from , and to Cow Creek or Cow Bayou, two fresh water swimming spots. Also, I thought it would be fun to take Karl on a very low-cost trip across the southern .  He and I hitchhiked from , across southern , ,  to , in the panhandle of that state.  Then we hitchhiked back, and arrived home unmolested and unmurdered, something far less likely today (2011).
In the fall, Karl and I entered .  I began a year as a typical  kid, trying to get a college education at the very least cost possible.  My parents, like many other middle class people in those days, were not affluent at all, and even the low price for an in-state student at a state school was a stretch.
I think Karl had very few extra dollars as well.
We lived in different rooming houses, and we visited each other only rarely.
At the end of the school year, I had completed a year of college.
Karl, on the other hand, through his native brilliance, his superb educational preparation in , and his year of intense study in , was able to apply for and satisfactorily complete a test that allowed him to be granted a Master’s degree in English!
He didn’t even have a bachelor’s degree, but his professors found that to be no problem.
After that year in , by the terms of his grant, he returned to , where he quickly obtained a PhD. After he had his doctorate, he contacted his old professor at , who had since moved to U.C. Berkeley, and soon Karl was an assistant professor at .
Karl spent a few years at , then went to the  to teach, and finally landed at Harvard in 1968.  Since then he has had a brilliant career teaching German literature and writing many, many books.
Karl somehow tracked me down recently (April 2011) and invited me to lunch at the Harvard Faculty Club, and we got together again, after 57 years.
Some of Karl’s books:
Karl Siegfried Guthke, The Gender of Death: A Cultural History in Art and Literature (Cambridge University Press, 1999).
Last Words: Variations on a Theme in Cultural History by (Oct 30, 1992)
Erkundungen: Essays Zur Literatur Von Milton Bis Travern (Germanic Studies in ) (German Edition)  (Sep 1983)
Last Frontier: Imagining Other Worlds, from the Copernican Revolution to Modern Science Fiction by Guthke and Helen Atkins (Nov 1990)
B. Traven: The Life Behind the Legends by Guthke and Robert C. Sprung (Apr 1991)
Epitaph Culture in the West: Variations on a Theme in Cultural History (Apr 2003)
Letzte Worte: Variationen uber ein Thema der Kulturgeschichte des Westens (German Edition) (1990)
Ist der Tod eine Frau?: Geschlecht und Tod in Kunst und Literatur (German Edition) (1998)
Das deutsche bürgerliche Trauerspiel (1972)
Gotthold Ephraim Lessing (Sammlung Metzler ; Bd. 65 : Abt. D, Literaturgeschichte) (German Edition)  (1979)
Das deutsche burgerliche Trauerspiel (Sammlung Metzler. Abt. D, Literaturgeschichte) (German Edition) (1980)
Das deutsche bürgerliche Trauerspiel. (Jan 1, 1994)
Literaturkritik (Freies Deutsches Hochstift) by Albrecht Von Haller and Guthke (Jan 1970)
B. Traven: Biographie eines Ratsels (German Edition) (1987)
Gerhart Hauptmann: Weltbild im Werk (Uni-Taschenbucher) (German Edition) (1980)
Gerhart Hauptmann: Weltbild im Werk (Uni-Taschenbucher) (German Edition) (1980)
Das Abenteuer der Literatur: Studien zum literarischen Leben der deutschsprachigen Lander von der Aufklarung bis zum Exil (German Edition) (1981)
Der Mythos der Neuzeit: Das Thema der Mehrheit der Welten in der Literatur- und Geistesgeschichte von der kopernikanischen Wende bis zur Science Fiction (German Edition)  (1983)
Schillers Dramen: Idealismus und Skepsis (Edition Orpheus) (German Edition)  (1994)
Lessings Horizonte.  (Apr 30, 2003)
[NOTE: This Blog was originally posted on July 17, 2011.  This version includes recently discovered old photos and some updating.]
Now, while we are the subject of books, The Personal Navigator offers these books and papers:
Almanac, The, 1880 Hudnut, James M., Editor 1879 : Francis Hart & Company, .  64 pp. 16 x 22.5 cm. Almanac features engravings and brief biographies of leading political figures in U.S., including John Sherman and A.G. Thurman of Ohio, Samuel J, Tilden and William A. Wheeler of New York, Thomas A. Hendricks of Indiana, James G. Blaine of Maine, George B. McClellan of New Jersey, George F. Edmunds of Vermont, Thomas F. Bayard of Delaware, and U.S. Grant of Illinois. Almanac includes industrial statistics, value of imports, hints for Healthful Homes, Life Insurance Topics (several pages), ads for newspapers, magazines, life insurance, fire insurance. Paper booklet, slight staining on back cover, very good. (8180) $19.00. Biography
Custom of War: A Solemn Review of the Custom of War; Showing That War is the Effect of Popular Delusion and Proposing a Remedy; eleventh American edition, revised by author  Pacificus, Philo (Noah Worcester)            1833    Boston, MA: S.G. Simpkins. Author notes that we regard with horror the customs of ancient heathens, in offering their children in sacrifice to idols.  We are shocked by the customs of the Hindoos, in burning woman alive on the funeral pyres of their husbands, and by casting living children into the in a living sacrifice-- yet Christian nations decide controversy among nations by the edge of a sword, by powder and ball, or the point of a bayonet!   The depravity occasioned by war is not confined to the army. Every species of vice gains ground in a nation during war.  Author declares that war is a heathenish and savage custom, of the most malignant, most desolating, and most horrible character. 24 pp. 15.5 x 24 cm. Paper booklet, bound by strands of thread. Several pages have never been opened. Fair.  (8174) $26.00. Educational/Religious 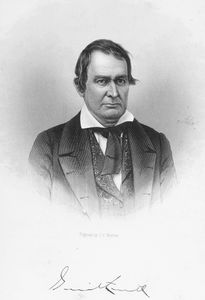 Gerit Smith, M.C. , 1854
Gerit Smith's Speech to the Congress on The Nebraska Bill, April 6, 1854 by Smith, Gerrit 1854 Washington, DC: Buell & Blanchard, Printers. Gerrit Smith (1797-1874)  was a Congressman from when he made this speech,  a stirring call to abolish slavery, and fighting against slavery in and the Nation. "This nation holds, in the iron and crushing grasp of slavery, between three and four millions, whose poor hearts writhe and agonize no less than would ours, were their fate our fate. And yet, she is not content even with these wide desolations of human rights and human happiness. On the contrary, she is continually seeking to extend the horrid realm of slavery.... there is imminent danger, that and will be wrested from freedom, and added to the domain of slavery and sorrow."  Smith was a more vocal opponent than most of the abolitionists, including even Garrison. Shortly after this speech he became so impatient with Congress that he resigned, and began more aggressive and violent work in freeing slaves.  24 pp. 15 x 22 cm. Paper booklet, pages worn, first sheet loose, poor. (7626) $45.00. History/Slavery
Rockport Eagle, The, Rockport, Mass., Thursday, Oct. 22, 1970Hurnowicz, Frank and Betty J, editors.  1970            Rockport, MA The Rockport Eagle Newspaper Co. Weekly edition features photo and story about Clarence Waddell, boat builder. Selectmen focused attention on Commonwealth's plan for reconstructing Rt. 127 at Nugent's Stretch, and criticism of Representative Harrison for his apparently taking over citizens' petition organized by Ted Tarr.  Column, "Tongues & Cheeks" by Frenchy Hilliard attacks Selectmen Nick Barletta and G. Herbert Carlson about their criticism of his earlier remarks about Town Engineer and fence at the Granite Savings Bank.  12 pp. 29.5 x 44 cm. Newspaper, good. (8148) $15.00. Newspapers
Memoirs of the Harvard Dead in the War Against , Vol. I, The Vanguard by Howe, M.A. DeWolfe 1920 , MA:  Press.  Volume I the Vanguard includes the memoirs of thirty Harvard men whose deaths occurred before the  entered the European War. Over 360 Harvard men died in World War I, and these are included in Vols. II through V. This volume contains the memoirs of George Williamson '05, Edward  Stone '08, André Chéronnet-Champollion '02, Harold Marion-Crawford 11, Calvin  Day 12-14, Carlton  Brodrick ’08, Harry Byng ’13, Henry Farnsworth ’12, Charles Cross Jr. 03, Archibald Ramsay 07, George Taylor 08, Allen Cleghorn (Instr), Crosby Whitman '86, Merrill Gaunt, Victor Chapman ’13, Clyde Maxwell '14, Alan Seeger '10, Henry Coit '10, Robert Pellissier '04, John Stairs (Law '14), Dillwyn Starr '08, William Lacey DMD '13, Norman Prince '08, Edward Sortwell '11, Edgar Shortt '17, Henry Simpson '18, Howard Lines (LLB '15), Lord Gorell (Henry Barnes) (Law '04), Addison Bliss '14 and Henry Suckley '10. Many colorful stories of the heroism of fine young Americans, Britons and Frenchmen. 200 pp. 15.6 x 23.7 cm. Red cloth on board with gilt page tops, title in gilt, cover bright and clean, spine sunfaded, several pages unopened, very good. (1742) $49.00. WWI/Biography 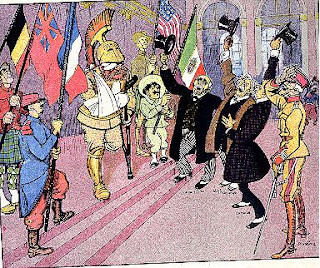