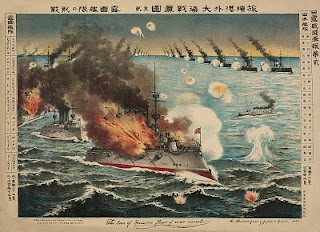 of , from a Japanese Print

It all started with a surprise attack by the Japanese Navy.  Japanese Navy destroyers raced into , and attacked the Imperial Russian fleet at anchor on the night of 8-9 February 1904. This was the start of the Russo-Japanese War…. and a whole lot more.
The Japanese used a similar surprise attack plan on the American fleet 37 years later at .
Russians were so surprised and disappointed with the failure of their Army and Navy in the Russo-Japanese War that it was a major reason for the 1905 Russian Revolution. 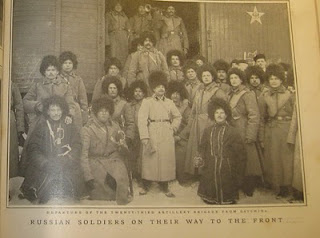 Photo, Russian Soldiers on their way to the Front
The Russo-Japanese War happened 107 years ago, just a few years after had engaged in an adventure across the Pacific in the Spanish-American War.
Our President was Theodore Roosevelt, and he came into office sounding the alarm for to wake up and look at who we were, and what we could do.  No longer did ships have to depend upon favorable winds to reach their destinations. For over half a century they had been using coal-fired boilers to drive steam engines.  This meant that we could buy goods from places all over the world, and get them transported to us faster and more reliably.  More importantly, it meant that our growing factories could ship their products world wide.
European nations and the had been showing much interest in capturing colonies and lucrative trading partners in the . The Boxer Rebellion in Northern China had shown that the Chinese were not going to sit still for western imperialists, and this was a fight that involved the , , , , , and .
had remained fairly closed off from the rest of the world until the 1860s, but by 1904, they were coming on strong, with a modern Navy, and a powerful Army. They eyed and with great interest.
’s Tsar Nicholas II was very intent upon reaching eastward.  He had pushed for speedy completion of the Trans-Siberian Railway to , and the Russians were looking to the south, toward Manchuria and , across the .  They really needed a warm-water port in the Far East, and .
This war pitted fierce-looking Cossacks, and fur-hatted Russian infantrymen against equally-fierce looking Japanese troops in the first large conflict of the Twentieth Century, and a modern war that was a preview of things to come in World War II and beyond.
Fighting took place in Manchuria and , around places that Americans learned much more about during the Korean War of 1950-53.

I’m often surprised at how much history many of our young people have been able to tuck into their brains, in addition to all that flurry of texting and video games and such.
I’m not old enough to have been around for the Russo-Japanese War.  Gosh, my Dad was five years old that year.
But for some of us, history is like one big, delicious bowl of spaghetti, and it’s all connected.
We lived for two years in , and in , everyone knows about this 1904 war, and how the troops boarded the Trans-Siberian Railway and went as far as , where the railway ended.  Then they took another train south to .  They also know about the 18,000 mile trip that Admiral Rozhestvensky took the Russian Fleet, from the Baltic, around Africa, to an encounter with the Japanese Fleet in the Straits of Tsushima, between Kyushu in and the Korean peninsula.
Right after living in I lived for three years in , , where everyone still celebrates Admiral Heihachiro , the hero of the Battle of Tsushima in 1905.   was the base from which the Imperial Japanese Navy sailed to fight the Russians in 1904-05, and it was also a major base for the Japanese again in World War II.  After the war, the Americans took it over, and still operate a base there.
If you’re still with me on the “history as spaghetti” idea, you can draw connections between the Japanese surprise attacks on in 1904 and in 1941.
And you can connect up the dots between Russian defeat in the Russo-Japanese War, and the 1905 Russian Revolution, which led to the 1917 October Revolution, which gave the world Communism and the .
You might enjoy the book listed below, because it is filled with interesting pictures taken in and , , in , , and in Manchuria and . People, cavalry, guns, and warships.

Here’s the book that I just acquired: 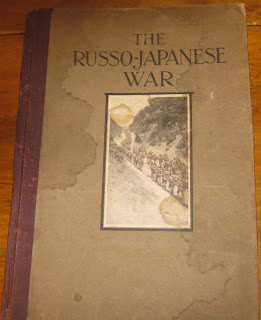 Russo-Japanese War, The: A Photographic and Descriptive Review of the Great Conflict in the Far East; Large format book of pictures; Reporting and photographs by Davis, Richard Harding; Palmer, Frederick; Archibald, James F.J.; Dunn, Robert L; Bartlett, E.A.; Hare, James H.; Whigham, H.J. and Bulla, V.K. 1904. : P.F. Collier & Son.
Story told in excellent black-and-white photographs of conflict between , only recently a world power, and , pushing eastward in Siberia, over Manchuria and . Most photos are by Colliers photographers, and text is by Colliers special reporters. Book tells story of Cause of War --Disputed Territory; Preparatory Stages; First Battles of War; March to Ping-Yang; From Chenampo to the Yalu; Russian Advance to Front; Chroniclers of the War; of the Yalu; and Honoring the Heroes and the Dead. Many photos taken in and Tokio (). Includes correspondence re negotiations preceding war with photos of Czar, Mikado, and many of their military and civilian staff. Photos of Russian Red Cross personnel, and ladies sent by Queen to observe Red Cross operations. Photos of Russian ships bottled up at . 127 pp. 28 x 39 cm.  Paper on board with cloth spine, cover water stained, corners bumped, text block clean and very good, binding tight, altogether a fair copy. (8188) $75.00.       History/Naval/Military/Japan, 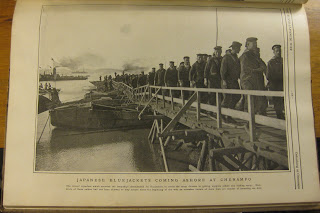 Photo of Japanese Bluejackets Coming Ashore at Chenampo (, , port city for ). They hadn’t been ashore for two months, and they’re smiling.

We invite you to consider these items, as well: 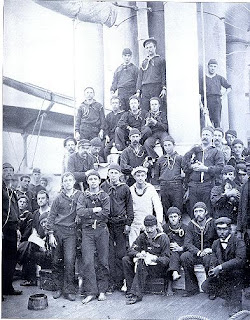 Farmers' Cabinet, The; Advance and Journal, , June 30, 1898 Rotch, W.B. Editor and Publisher 1898 : The Farmers' Cabinet. This issue of this famous old weekly southern paper concentrates on  local news, with a drawing of  Colonel J.A. Greene, the Fourth of July orator for 's celebration.  Also there are plans for an elaborate electrical display will be used to imitate the destruction of a battleship in the (after the destruction of USS Maine in ).  There will also be a tug of war, a wheelbarrow race, and more.  News of the War with is on page 4, speculating on raids on the Spanish homeland by the U.S. Navy after the victory in the Philippine Islands by Admiral Dewey.  News from includes report of troops surrounding .  Report of Strawberry Day for New Hampshire Horticultural Society, visiting George F. Beede's farm of acres of the finest berries.  " Letter" details the extensive lines of the Union Pacific in , description of (San Hozay, it explains) , and . Distances are given from "Frisco". Ad for cure for constipated bowels and biliousness:  Ayer's Pills and Ayer's Sarsaparilla. Article "An Army Officer's Life"  starts with description of 63-year-old former army officer and ends with testimonial to Dr. Williams' Pink Pills for Pale People. 8 pp. 38 x 56 cm. Newspaper, good. (7711) $20.00. Newspapers/History

Weekly Messenger, Thursday January 19, 1832 : Nathan Hale. 4 pp. 44 x 59 cm. Cholera in authorities don't want to talk about it. American sailor apparently murdered "in the interests of science" in . Crime of blood hounds in human shape murdering people for purposes of dissection. The sailor's clothes were found in a house of ill fame. Text of speech in Senate by Henry Clay on Reduction of Duties. Henry Clay is nominated by the National Republican Party for President, and John Sergeant for vice president. [Note: Clay lost to Andrew Jackson in the 1832 election.] Report of $1100 of Bibles burnt in Report of sentence of young Miller Snell in attempted poisoning of the nine members of the Noyes family. He sprinkled arsenic on their food at nine in the morning, and returned at 12 and added to the quantity, and gave notice that he would not return for dinner. Newspaper, very good. (6423) $25.00. Newspaper/History.

American Mercury, The, A Monthly Review Edited by H.L. Mencken, June 1929 Mencken, H.L., Editor 1929            : The American Mercury. Lead article, "Murder in the Making" by Lawrence M. Maynard, who is currently serving a seven years' term at . He has written several articles, short stories and a play while in prison. "The taking of Montfaucon" by James M. Cain, who served in The War. Mencken has a blazing editorial in this issue about the status of Negroes in today. "The Negro realtors, insurance magnates, bootleggers and other grotesque upstarts of today are accumulating a fund which, in the long run, will achieve more for their race than any conceivable white philanthropy.....From among the best of them will come a new leadership....What the Negroes need is leaders who can and will think black."  "Black Babbitt may turn out to be a more useful man, in the long run, than either Washington or DuBois."  "The Elephant and the Donkey" by Edward Lee McBain.  Ad on back cover for Camels shows man with cigarette in mouth offering a cigarette from a pack to a lady. 256 pp. + adv.            17.5 x 25.5 cm. Magazine, edges worn, good. (8177) $28.00. History/Race Relations

Alaska-Yukon-Pacific Exposition: Report of the Legislative Committee from the State of to the Alaska-Yukon-Pacific Exposition, , January 15, 1910. 1910 , : State of . was the only state east of the Rockies to vote to appropriate money to take part in this exposition, held in   in 1909. Book provides summary of entertainments sponsored by , text of major speeches, including one by N.Y. Gov. Charles Evans Hughes. Considerable text is devoted to celebration of Seward Day, Sep. 10, 1909, when a statue of the great Secretary of State William H. Seward was dedicated. His son, General William H. Seward, took an active part in the celebration. Interesting photos of interior of , and of various participants. 197 pp. 20 x 28 cm. Red cloth on boards with gilt lettering and State seal of . Spine fabric faded and mottled, front and back hinges cracked, one illustration page loose. Poor. (1464) $39.00. History/Biography

Posted by The Personal Navigator at 2:36 PM