EMBRACING DEFEAT: Japan in the wake of World War II

This book begins on August 15, 1945, when, all across , the people heard their emperor’s voice for the first time.  He announced that Japan had capitulated. It was the end of a “holy war” for the Japanese.
Victory for the and her allies had come, but the Japanese people were shattered.  Not only were Hiroshima and Nagasaki devastated by two atomic bombs; other cities were heavily damaged by allied bombing; Japan’s Imperial Navy had been wiped out, and its army, spread out all across Asia and the Pacific, was demolished.
[POW’s incarcerated by Germans—4% died in captivity; Those in  Japanese prison camps – 27%]
The Americans came shortly after the war and began to install a parallel government, headed by Gen. Douglas MacArthur. 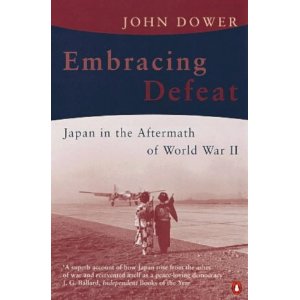 Kyodatsu.  It’s hard for us to recall, or to visualize the despair and the destitution of the Japanese people after the war. They were exhausted. Those who could and would, pillaged military and government supplies and stole millions of yen.  For the rest, there was starvation.  People were eating rats and sawdust, acorns, grain dust, peanut shells. Magazine articles cheerfully showed how to catch grasshoppers.  People sold whatever clothes they could to eke out an existence. People died of dysentery, tuberculosis. With a shortage of one million young males, there were group marriage meetings to make it easier for women to find husbands.  There was widespread alcohol and drug abuse.
The American servicemen in were everything you can imagine.  They were the good people we all envision, who helped distribute food supplies, and individual soldiers gave candy bars and foodstuffs to those around them.  But, there was graft and corruption both amongst Americans and Japanese.  Many Japanese women turned to prostitution, and the black market was rampant.
MacArthur was a very detached, insular figure.  He was good at talking, but not good at listening.  He did not attend many social events with the Japanese or even with Americans, and he didn’t make any effort to get around the country or to learn more about the Japanese, so that after he left and returned home and testified before Congress, he described the Japanese people as “easily  led… good followers… like a 12-year-old boy….” [Note: Pres. Truman dismissed MacArthur on April 11, 1951, which precipitated his appearance before Congress.]
We were introducing democracy to a country that had never known it… but we were doing it autocratically.   We had heavy censorship, and permitted only obedience. Young Americans who spoke only English were administering, and joked about the pidgin-English of the Japanese.  We saw white supremacism in full flower.
MacArthur and his staff were very suspicious of the “Old Japan Hands” of the State Department, and thus turned their back on the sources of some of the richest knowledge Americans had about and the Japanese.
The hierarchal Zaibatsu system,  the old Mitsu, Mitsubishi, Sumitomo and Yasuda families, and  Asano, Furukawa, Nissan, Okura, Nomura and Nakajima firms were gradually disassembled.  Smaller companies began to beat swords into plowshares, and we saw the rise of Komatsu, making tractors; Canon, Nikon, cameras; Honda, motorbikes, then motorcycles; and Ibuka Masaru began a company to make radio innovations, and then became Sony Corporation
Today, as communism has nearly disappeared from the world scene, we may have trouble imagining the threat that Americans labored under as they worked to bring through this era.   We were very much afraid that Japan would “turn red” and become Communist, just as China was at that very time.  We were also afraid that assassinations and terrorism would take place.
This book, published in 1999, highlights the end of the Showa era, the reign of Hirohito (b. 1901, ascended throne Dec. 1926) which ended with his death in 1989.  This historic epoch began with Japan quickly ascending in world importance and power; defeat by the U.S., then “victor and vanquished embraced Japan’s defeat together.” This year—1989—marked the bursting of the “Japanese bubble” of technical and industrial supremacy
I went to to command   an American naval base 28 years ago, in 1983, and left three years later. I had about 1000 Japanese employees on the base.  I interacted heavily with the local Japanese civilian and military officials, and with many well-to-do Japanese residents, all members of a local “Japanese-American Friendship Society.”  I studied Japanese, attended Japanese Rotary clubs and made many visits to Japanese organizations, and each year took part in the harvest festival parade, dressed in a traditional costume from Japanese  mythology.
I was able to talk to people who had served in their military forces in World War II, including the man who, as a young Japanese lieutenant commander, had planned the attack on .  My Japanese teacher was a wiry little man who had been an ensign in the Imperial Japanese Navy, and was selected to fly in the suicidal Kamikaze force, except that they ran out of planes before he could get his chance. [See my Blogs for July 8 and 10, 2011.]
I came away with a sincere admiration of the Japanese people.  I also came away with the sincere feeling that I had learned much, but still knew very little, about and the Japanese.
I think Embracing Defeat gives an excellent picture of ’s rise from the ashes after World War II.

If we look at the way is still handling the recovery from the terrible earthquake and tsunami that ravaged northern and laid waste to the Fukushima Nuclear Power Plants, you can see that the Japanese people are truly remarkable in their strength and perseverance.  They won’t let this pull them down.

This little book twists Uncle Sam's mustache---
Pressure and its Causes, Being the Old Fashioned Notions of an Old Fashioned Man 1837 : Otis, Broaders & Co. 69 pp. 9 x 14.6 cm. "A Parabolic Phrenological Scheme of National Character."   Uncle Sam's majority has not belied the flattering indications of his infancy. He is proud now, of his paternity, and in the same breath that he berates Father Bull (), and calls that old gentleman all sorts of wicked names, he boasts his descent from him... Self Esteem is the corner stone of all Uncle Sam's edifices... The next organ of our imaginary head of Uncle Samuel is his Love of Approbation.   Author writes a rambling, tongue-in-cheek critique of America today (that is, 1837) including Embargo, War, Andy Jackson, Banking, manufactures, U.S. Bank, Lowell, Cotton Lands, Specie Circular.  Reasons for the Pressure.     Small paper book, "Cy Liford Egr, " written on cover;  fair condition. (8184) $46.00.  History 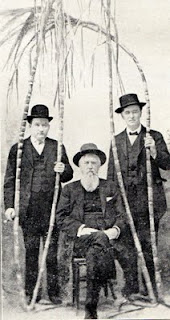 S.W. Fordyce, Sr., one of the original Gringo Builders poses seated
with J.L. Whitaker (left) and Tom Finty, Jr. (right), and giant sugar cane
(it turns out that sugar cane for the Rio Grande Valley was a bust!)

Gringo Builders [Signed by author]  by Allhands, James Lewellyn 1931 Joplin, MO: Privately Printed by J.L. Allhands.  Author, J.L. Allhands (1879-1978), of , and , , a railroad construction man, writes about the building of railways in at the start of the Twentieth Century. This book is a rich source for history, focused upon building a transportation system conceived by Col. Uriah Lott, who interested B.F. Yoakum in the project. Tale of drunk Negro and author and Texas Rangers convert him to abstinence. King Ranch and the building of the Brownsville Railroad. History of . and Rio Grande Rwy. Co.  , Brownsville & Mexico Railroad. Madonna of the Rails--women pioneers in railway construction. The first big water projects: irrigation, cultivation canals and the development of the . Robstown to . Brazoria. Lines East of . and . With Index. 297 pp. 15 x 23 cm. Dark green  cloth on board, gilt printing. Author signature on front free endpaper. Title page has light horizontal stains. Very good. (2662) $99.00. History/Railroads/Texas 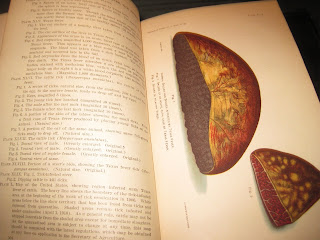 Diseases of Cattle, Special Report, U.S. Department of Agriculture, Bureau of Animal Industry, Revised Edition, 1916  by Drs. Atkinson, Dickson, Harbaugh, Hickman, Law, Lowe, Mohler, Murray, Pearson , Ransom and Trumbower. : Government Printing Office. 568 pp. 14.5 x 22.8 cm.     Very comprehensive report on Cattle Diseases, including Depraved Appetite, Dyspepsia or Gastroinestinal Catarrh, Diseases of the Bowels, gastroenteritis, colic, more. Poisons and Poisoning. Diseases of the Heart, Blood Vessels and Lymphatics. Noncontagious diseases of the organs of respiration.  Respiratory Organs. Diseases of the Nervous System. Urinary Organs. Generative Organs. Excellent color plates. Cloth on board, heel and toe of spine frayed, top of spine badly frayed. Rear inside hinge cracked. Two b&w plates at p. 300 torn, lack top 40%. Because of this partial plate, book is poor. (2561) $26.00. Farming
Farming As It Is! An Original Treatise on Agriculture with the Rights and Duties of Farmers by Pinkham, T.J.   1860 : Bradley, Dayton and Company.   Pinkham takes on the dark influences upon farming. First, the Agricultural Society of Massachusetts, “which collects an annual stipend from the Commonwealth and the aristocratic farmers of   have a good dinner, and do nothing more!”  Next is "Happiness"-- and Pinkham lists various towns in the Commonwealth with their population, then the number of paupers, insane persons and idiots. Much discussion of manure.   Incompetence of the Board of Agriculture. "They are fond of nice roasts, porter-house steaks, and plum pudding..."  Still more on the perfidy of the Board of Agriculture (Chas. L. Flint, Secretary) ...Author clearly has an axe to grind.  393 pp. 12 x 19 cm. Blindstamped black cloth on board, spine torn, biopredation on cloth on back cover, poor.  (5221) $28.00. Farming.

Posted by The Personal Navigator at 2:17 PM