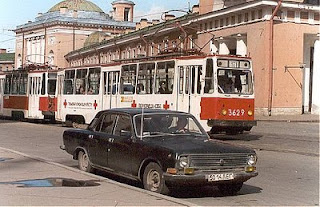 Typical scene in downtown , with the largest tram system in the world.
Car in foreground contained surveillance operatives (Goons).
Caught Red Handed.   One day, just a few months before it was time to leave the , I was assigned to find out about this huge ship that was under construction in (now ).  It was a large ship, and as the superstructure got put together, it was a mystery to our intelligence community what this was going to be.  The Naval Intelligence command ordered me to find out what I could.  This was in 1983.
On this day, because there was so much interest in this ship, we thought we would take a drive.  I was traveling with Terry, the Canadian naval attaché, a commander, and he was driving our consulate’s Niva all-wheel drive vehicle.
Terry was a sturdy, husky ship driver from .
was a magnet for naval attachés, because our job was to collect all the intelligence we possibly could about the Soviet Navy.   Attachés had been traveling up there for decades, since before World War II, in hopes of catching a glimpse of new warships the Soviets were building in the many shipyards in this city.
We traveled together with Canadians, or Brits, and sometimes with French, Italian or West German attachés.  The British consulate had a red Niva reserved for their attachés, and the American consulate had a green Niva for our attachés. All American  diplomatic cars had red license plates that started with “D 04”, while regular Soviet plates were white. It wasn’t too hard for the KGB to keep track of us.
The has always been very secretive about most things.  You couldn’t take pictures of bridges in downtown ; maps of were purposefully inaccurate, so they couldn’t be used by an invading army.  Their experience with Napoleon and then with Hitler had made them more than a little skittish.  One can imagine that the Soviets considered taking photographs of ships under construction at any of their shipyards absolutely forbidden.
I hear that even today, all these years after the collapsed, Russians still have a built-in distrust of foreigners talking photos. All diplomats in are pretty much considered spies.
There’s one thing good about traveling with an officer of another nation.  Occasionally the KGB would decide to rough up one of our attachés, either because one of their people had been roughed up in or , or just for the heck of it.  These things were carefully planned in advance, and they had to be cleared by the KGB desk officer.  If you were going to be traveling with an attaché from another country, the incident would have to be cleared with that desk officer, too.  Generally, unless it was a top level incident that was going to happen, that level of bureaucracy was just too hard, so it was usually safer to travel with someone from another country.

We were all ready for our first run of the day, to observe this strange large ship on the building ways.  Terry the Canadian was driving, and I was in the passenger seat, all ready to observe as we crossed the bridge over this canal. From this canal we could look right into the shipyard.
is called “The Venice of the North” because it has many, many canals all through the city.  As we crossed this canal I noticed a strange-looking guy standing by a dump truck, parked on the canal bridge.  I had already started observing when I spotted this guy.  At the same time, he spotted me, and yelled.  Then he jumped into his dump truck and took off after us.  Out of nowhere appeared a small Zhiguli, the little Russian Fiats the KGB used to follow us around.  It was loaded with the usual number of four goons.
Then another Zhiguli appeared, also loaded with goons.  They were following behind, to either side of the dump truck, dodging in and out of traffic, dodging the streetcars, etc.  I told Terry to get the hell out of here, meaning the area around the shipyard, and he headed right down town.  We were going pretty fast, with the dump truck and the two Zhigulis.  Another Zhiguli appeared, and they started to box us in—one in front, one on either side, and the truck astern.  And alongside us was one of ’s many trolley cars.
Just as we got into ’s center, one of the busiest shopping streets, they forced us to stop.
We immediately displayed our diplomatic papers against the closed windows as they demanded we get out.  Our standing instructions were, in such cases, to show our papers and stay put—never willingly open the door or window of the car.  Of course, if they wanted to, they could get in the car in a second, but this was always one of those tricky diplomatic incidents, and if the Soviets were in plain view of regular citizens, they avoided that… usually. 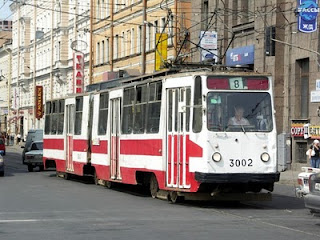 Tram near Finlandskaya Station (famous for being the station to which Lenin returned after exile, to lead the October Revolution of 1917).

The lead KGB guy got out of his car, and was pointing at me, and telling the others that I was using a big camera, with a long lens, and he used his hands to show how long.  They walked around our car, wrote down our license plate number, which they knew very well anyway, and then they all got in their cars and truck, and disappeared.
We were pretty shaken, even though they had apparently left, and we quietly, at speed limit, drove back to the American Consulate, and spent the rest of the day touring as the innocent tourists we were.
The story of this incident later appeared in Red Star, the national Red Army newspaper, and was picked up by Canadian and American newspapers:  “American naval officer caught Red Handed in , Canadian involved.”
I’m glad the Cold War is over. 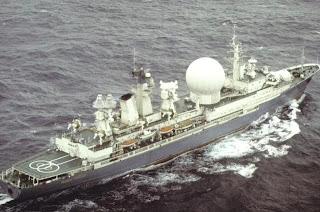 This is what we were after: Marshal Nedelin Class Soviet Range Support Ship
The Soviets used these ships to track our missiles as well as their own. 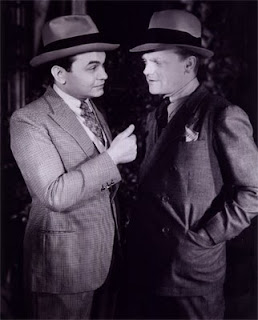 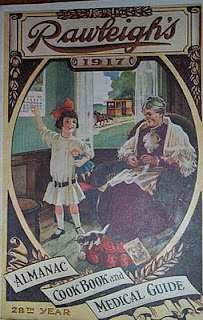 American Reader, The, containing a selection of Narration, Harrangues, Addresses, Orations, Dialogues, Odes, Hymns, Poems & c. Designed for use of schools. By John Hubbard, John 1820 Bellows Falls, : Bill Blake & Co. Loads of words of advice to young readers. Patriotic Address of Rolla, the Peruvian General, when attacked by the Spaniards; repeated in 1803 by R.B. Sheridan to the British while Bonaparte was preparing to attack that Kingdom.  Observations on the Indians of : "Poor Indians!  Where are they now? The people here now may say what they please, but on the principal of eternal truth and justice they have no rights to this country.…”  "never... will the Indians be brought to love the whiteman, and to imitate his sufferings." 215 pp. 10 x 16 cm. Paper on board, most of paper worn off, exposing bare wooden boards. Good. On front free endpaper is handwritten name "Adeline". (3553) $47.00. Educational

Posted by The Personal Navigator at 1:04 PM