What an incredible place we live in!

What an incredible place we live in! 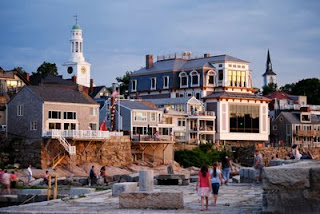 Rockport's downtown, viewed from Lumber Pier
Shalin Liu Performance Center in middle.
People visit our town in droves from April through October, and some even come during the months when Bearskin Neck is full of snow and ice.  But in summer, it is pretty much heaven on earth, with brilliant blue water, beautiful beaches, flowers blooming everywhere, and pleasant people.
Many years ago, caught the eye of artists, and they began coming here to paint.  They eventually took over an old building downtown and named it the Rockport Art Association.  They rented places to live and paint, and then put up their own art galleries.
Then, in 1981 a handful of local music lovers brainstormed the idea of creating an annual music festival, here.  For the next 28+ years they brought distinguished musicians to town to play for small audiences in the Art Association.
It is small wonder that the people at Rockport Music decided to build their own performance center here.  It’s more of a miracle that they raised millions of dollars and built a world-class music center!  Right smack in the middle of our little town!
However, some people are not happy to live in paradise.  Every few days, someone from Rockport writes a letter to the Editor of the Gloucester Daily Times, complaining about the recent decision to modify the rules for restaurants serving alcoholic beverages.
From reading these letters, it appears that some people in town:
Since it opened in June 2010, Rockport Music has filled the new performance center over and over again for performances that range from chamber music, jazz, pop, and simulcast of the Metropolitan Opera in . The new hall has won acclaim from music critics all over the , and performances regularly get reviews in The New York Times, as well as The Globe and many other papers and magazines.
Rockport Music has also been more than faithful to its pledge to involve Rockporters and others on with free music appreciation events, hundreds of school children have been involved with music, either as performers or as audience, both at the center and in their own schools.  [Over the past 30 years, thousands of kids have participated.]
Rockport Music has obtained permission to serve alcoholic beverages at intermission during performances, which has never even remotely caused any problems with abuse of alcohol by anyone.
Ever since the idea of permitting restaurants to serve alcohol in Rockport was first presented, back in 1995, some people have predicted disastrous consequences.  When it became law and alcohol was finally allowed in 2005, Rockporters and visitors quietly accepted the change, enjoying an alcoholic beverage with their meal just like they could in , or , or in their own homes.  I believe the Chief of Police has stated that to date, this has not caused any problems with abuse by patrons.
Some residents have questioned why Rockport should go to such effort to provide a more welcoming environment (music center and alcoholic beverages in restaurants) for “tourists”, but indeed, most of the people who attend Rockport Music performances live in Rockport or nearby.  Most of the people who enjoy a meal at local restaurants are Rockporters, except during peak summer months.
Some have questioned the motive of selectmen in permitting relaxations in the service of beverages, and ascribed similar “underhanded” tactics to the Chamber of Commerce and the Economic Development Committee.  What it appears they have been trying to do is to make it possible for restaurants in Rockport to serve customers in a way that is pleasant and enjoyable for the customer, whether they are Rockporters or from someplace else.
Part of the motivation for improving the restaurant climate has been to encourage more and better restaurants to open in Rockport, for the benefit of Rockporters, as well as visitors.
Another part of the motivation, particularly of Selectmen and the Economic Development Committee, is to provide more revenue for the Town from tourism.  More visitors paying room tax, meals tax, and paying for parking, means more revenue.  More visitors shopping and dining in town means more jobs for Rockporters, and encourages more businesses to open their doors, and pay taxes here.
Some continue to complain about the tax-exempt status of the new performance center.   I have already noted that Rockport Music provides many thousands of pupil-hours of instruction, motivation and entertainment to local students every year.  Most cities, not to mention towns, would give their right arm for a marvelous facility like ours, which brings many people to town to hear performances, and then to enjoy shopping and dining here.
Most of us truly love to live in paradise.
Samuel W. Coulbourn 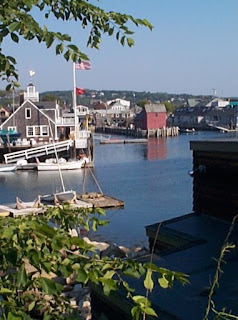 Posted by The Personal Navigator at 7:51 PM