The Mill Girls of Manchester

Dan’l Webster for President
Essex Register, , () Thursday Morning, September 15, 1836 : Palfray & Chapman. Notice of Whig Nominations in :  For President, Daniel Webster of ; for Vice President, Francis Granger, of ; For Governor, Edward Everett; for Lt. Governor, George Hull.  Commentary from the Amherst Cabinet about recent decision of Chief Justice Hornblower of New Jersey that a person should not be considered presumptive evidence of slavery simply by color. Anecdote about how Henry Clay took a bottle of wine to President Madison, which turned out to be blended with whisky. Snide remarks about Candidate Van Buren from the Washington Sun. "Character of Kosciusko" Text of speech delivered in the Senate by Gen. Wm. H. Harrison, on hearing of the death of Kosciusko, the martyr of Liberty, in Soleure, France in October, 1817. George Bancroft, "the white kid glove and silk stocking democrat" has been nominated as a candidate for Congress by the Van Burenites of Hampden district, MA. When the railroad from harbor, in is completed, and will be brought within seven days of each other. Lines of steamboats will be established to , Vera Cruz and the Isthmus of Darien, 15 days from , and 27 from will place the traveler on the shores of the Pacific! 4 pp. 41 x 58 cm. Newspaper, lightly soiled, some fraying at edges of pages, good. (7486) $30.00. Newspapers 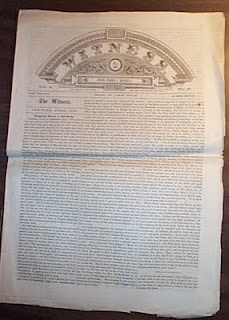 Witness, May, 1868, vol. 4 No. 7 Inglis, James, Editor  New York, NY: James Inglis & Co. 8 pp. 29 x 40 cm. Utter Ruin and Complete Salvation:  defective views of our natural condtion are always found with low views of the person and work of Christ. How can I be assured of Salvation? The Law magnified and Grace Vindicated. Newspaper, slightly browned, edges chipped, good. (5033) $10.00. Religious
Contact me at scoulbourn1@verizon.net
Posted by The Personal Navigator at 2:24 PM