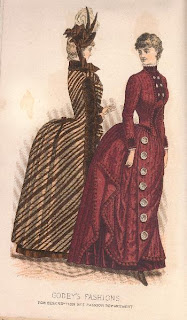 I imagine Winnie and Lizzie may have looked like these young ladies from Godey's
Winnie Gould was a bright, very well-educated woman from .  I had the privilege of reading two journals she kept on trips she took 1889-1891. Reading diaries and journals often gives you a very refreshing, unique view of a world that has since disappeared. Some detective work is required, and of course the internet contains a world of almost lost information.
This is from her journal of 1889.
Winnie is a young woman, Vassar alumna, who lives somewhere in , reached primarily by boat. She is obviously very literate and well-educated, and belongs to an affluent family.  Because of the warm reception she receives at all spots along railroads all over, I suggest that she may be related to Jay Gould, the so-called “Robber Baron” responsible for much of early railroad development in the United States.
Mar. 12, 1889. Left home on the 3:55 am train. Helen and Rebecca helped me off and Papa went with me to the depot. Consulted Capt. Warrick in as to tickets. Jessie Clinton and Cousin Isa came down town to see me. Took sleeper for .
Mar. 13. DeForest met me at the depot in the morning. Lizzie and I spent part of the day planning for our trip.
Mar. 14. Called on Mrs. Rugg and Lucy. Packed our trunk – prepared our lunch, etc. In evening played cribbage with DeForest and visited with him and Lizzie and about 10:15 p.m. we started for the depot accompanied by Mrs. Tennery. Farewell was said and the train moved off.  Mr. O’Brien kindly assisted us in changing cars in where we rode in a very hot chair car for . 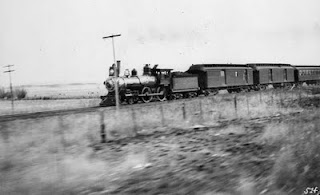 It sure beat the stage coaches.
Mar. 15.  . Mr. Morton and the other Missouri Pacific officials were as courteous as possible to us in every way. We bought our tickets over this line to , , , , etc. paying therefor $144.15. At one o’clock Dr. George Dennis came to the depot and took us out for a drive, showing us the prettiest parks and handsomest residence portions of the city.
Took bath and champoo   [old spelling for “shampoo”]
14 mi. horseback ride..
Mar. 19. . Stayed at  Menger House.. street car drawn by small mule….. Visited the . 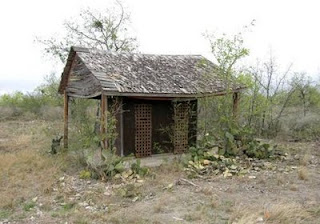