Our Life in the World of Antiques, Part I 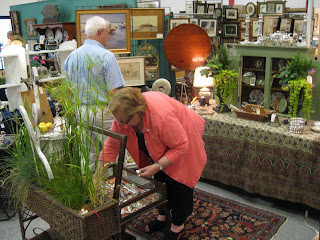 Marty at show in Camden, ME

It crept up on me.  Marty always admired antiques, and each place we lived, she learned a little more.
She started learning about antiques as a child, when her mother took her to auctions and shops in .
When I was in in , and later served in a submarine operating out of , or with crew based there, she scoured barns and attics in and the rest of for interesting old pine tables and chairs and remnants from earlier centuries.
Then we moved to northern Virginia and real Virginia (), and she visited outdoor flea markets in , , and .
When we moved to , my wife had begun to perfect her technique for finding interesting things from earlier centuries, and learning how to detect fakes.  She got plenty of opportunities in , because some Iranians were really good at producing what might look like centuries’ old brass and copper pieces with elegant decoration, all made to appear old by burying them in the dirt for a few weeks. 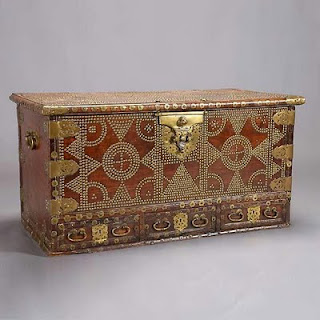 On my first trip down to visit Iranian warships in the , an old Arab showed me a Kuwaiti chest.  These are beautifully decorated wooden chests which had been used aboard the Arab dhows that sailed up and down the Gulf.  I bought it and took it back to , and Marty found another treasure to collect.
Then there were the rugs. The Persian carpets of are a whole chapter in the education of an antiques collector.  Marty and her friend Ann Duncan would have a driver take them down to the huge Bazaar in , and the two of them would disappear into the bowels of that exotic market for hours.  Ann introduced Marty to “her” rug man, and both would climb up to his loft, where his mards (young helpers) would flip rug after rug like pages in a book.  The girls learned about Hamadans and Tabrizes and Kermans and Qashqais, Bukharas and all the rest.  They learned how to check the structure of the rug for possible bleaching that would make the threads weak, and for the dreaded fake Persian carpets from and .  They were getting a master’s degree course in textiles in the dark corners of that huge bazaar.  They learned how to bargain with the rug merchants, including the Iranian way to signify “NO!” by making a kissing sound and looking to heaven.
We were just 100 or so miles south of the , and many interesting old Russian samovars found their way into antique shops in .
Our next overseas assignment was , and Marty quickly found her way down to the elegant and not-so-elegant antique shops in downtown .  Here she found fine old silver, ceramics and fabrics, paintings and more Persian carpets, from the fine old homes of .
Next we lived in , , and by now, my wife was getting much more conversant with all sorts of decorative arts, as she ranged around the shops of .
At various times I accompanied Marty on her antiques trips, and I usually headed for the old books.  At first, it was just something to do during the hours she spent looking at things that didn’t interest me, but I began to really enjoy finding a 200-year-old book with calfskin binding, perhaps a school book, a history,  often old religious books, and occasionally a handwritten diary, which opened up a whole new world for me.
One day I found a tiny diary kept by a young Union soldier, the clerk of his company, as he recorded his life from mustering in a field at Ipswich, MA, then onto a train heading south to war; trouble with Rebel sympathizers in Baltimore, then boarding a troop ship in Newport News, VA and sailing around Florida to the Mississippi River, and then fighting Rebel troops at Port Hudson. What a thrill to be reading this first person account— not something from a printed history book, but raw, absolutely original history of this man’s part in the Civil War!
I found a set of 1840 letters from a young girl working in the textile mills of Lowell, MA, writing to her family at home in northern New Hampshire.  These were such a treasure that they are now in the collection of Mill Girls' letters at Lowell National Historical Park.

When we went to , we found “Kommissiones” all over , where citizens were able to take their family treasures down to these shops and offer them for sale with a “commission” paid to the shop. Here you might find an elegant old Sterling silver samovar, or a beautifully painted tiny lacquer box, illustrating a scene from Russian mythology.  Very little of what Russians had created since the start of the even came close to elegant artwork, so most of the delicate pieces were pre-1917, often from the fine old families close to the Tsar.
For me, it was exciting to shop in an old book shop in Leningrad that had sold books in the same place for two centuries, and had many books that had carried the royal approval (and censorship) of Catherine the Great and later Tsars.  I still have one fine little book that pokes fun at this upstart named Bonaparte, published before he had made his ill-fated march across in 1812.
We went right from to for my next assignment on the of , and it turned out that my base in was just a short drive from the heart of ’s ancient pottery world.  Nearby were the pottery works of Mikawachi, Imari, Omura, Arita and .  Marty often visited some of the Master Potters to see them producing fine porcelain like they had been producing for centuries, and she took wives of visiting American dignitaries to visit as well.
When we lived in wealthy Japanese did not really appreciate their fine old antiques.  Most of them preferred to buy new things, including expensive artwork and furniture from Europe and the   For that reason, one could buy fine old tansus, made of kiri (paulownia) and sugi (cryptomeria) wood, with elaborate metal decoration, for low prices.  Antique silver, metal craft, ceramics and artwork were also inexpensive.
My ability to read Japanese never got past being barely able to read a tabloid newspaper, so I didn’t do much collection of antique Japanese books.
Another part of our antiques education was all the museums, palaces, embassies and distinguished old homes we visited in all the places we lived.

We returned to the in 1986 and lived in , and it was here that Marty transitioned from collector and student to an actual dealer.
And I transitioned from naval officer to become the head porter, learning how to load all manner of vans and trucks with antiques to take to antiques shows, then unload them, help set up a booth, after which Marty would spend much time decorating the booth just so, and then one or two days selling her wares. 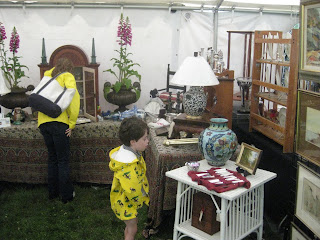 Booth under a tent in

We started doing antique shows in , and in 1987, and we are still doing them in 2011, 24 years later.
Marty rented a shop in downtown Rockport in 1994, called it Philomena’s (named after her Mother — it was her middle name) and we tried our hand at running an antiques business.  We learned a lot in a short time.  First, although thousands of visitors come to Rockport and walk through its shops, and they enjoyed visiting Philomena’s, more than likely they were in town to buy ice cream. At least, they weren't buying many of our antiques!  Second, in order to do it right, you have to be open every day, and when you are taking in only a few dollars most days, you really cannot justify hiring help, so Marty and I spent a lot of hours in that shop.
Next door was a Laundromat, and often people would come in the shop and announce that they weren’t there to buy—they were just waiting for their clothes to dry.
I remember one visitor to the shop.  I wouldn’t call Mary a customer, because she never bought anything, but she was a nice, elderly lady who had two problems— her hearing was very poor, and she had a habit of passing gas, and she didn’t know that it was not just her little secret.  She would spend hours looking at things in the shop, and making comments.  You hated to answer her comments, because she would then ask you to repeat until she could understand, and that might take a while.
She used our shop mainly as a launching pad, watching for the shop across the street to open.  It was run by three men who were all very good friends of hers, and when it finally would open, she’d leave us in a flash. 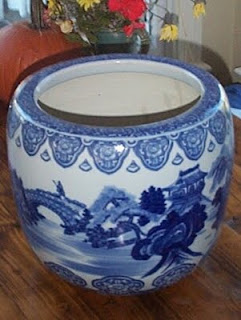 Now, about these books and papers…… 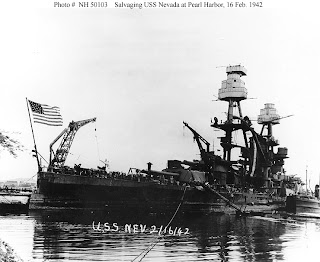 Jane's Fighting Ships, 1942 [Issued June 1943] Founded in 1897 by Fred T. Jane, 46th Year of Issue 1943 McMurtrie, Francis E., A.I.N.A., Editor. : The MacMillan Co.  Forward to this book notes the tremendous difficulty of preparing this edition, with secrecy on part of combatants and neutrals, efforts to obscure or propagandize, and ships being sunk daily. Frontispiece photo of HMS Exeter, Royal Navy cruiser that bore the brunt of action with the German "pocket battleship" Admiral Graf Spee at the of the Plate on December 13, 1939. Text notes that, while the Graf Spee was scuttled, was completely refitted and returned to combat. She was sunk by Japanese air attack at the of the in 1942. This fascinating real-time record of naval action in World War II shows the ships that survived the Japanese attack on (Dec. 7th, 1941), even noting changes to them as result of repairs after the attack. Also with 62 pages of advertising for everything you need to outfit a warship. 582 pp. + 62 pp. adv. 31 x 20 cm. Light blue cloth on board with gilt lettering. Edges worn, tiny white paint spots on cover, good. (6985) $140.00.  Naval/World War II

Presbyterian: Report of the Board of Directors of the Presbyterian Education Society at the Annual Meeting, May 11, 1820 with Appendix 1820 Newark, NJ: Presbyterian Education Society. Annual meeting held at New York, included executive commiuttees of Philadelphia, New-York, Counties of Morris and Essex, (NJ); Catskill, NY, Cayuga of Onandaigua; Genesee, Geneva, Ontario, Bath, Long Island and West Tennessee. Work of Rev. Doctor M. La Rue Perrine in western counties of state. Rev. Doctor Gardiner Spring has been collecting funds in and . Work of Daughters of .  Report from , “truly a desolate region,” with only 200,000 population, they can number only 15 ministers of the Presbyterian Church, but few of any other description. Includes Constitution of Society; list of officers and directors: Hon. Elias Boudinot, L.L.D. is President;  and executive committees. List of subscribers and donations. 32 pp. 15 x 23 cm. Paper booklet, fastened with stitching. Pages uneven and two pages uncut, poor. (6755) $39.00. Religious

Gentle Art of Making Enemies, as pleasingly exemplified in many instances, wherein the serious ones of this earth, carefully exasperated, have been prettily spurred on to unseemliness and indiscretion, while overcome by an undue sense of right;  Collection by Whistler, J. McNeill. 1927 : G.P. Putnam's Sons.  The running gunbattle between the Artist, J. McNeill Whistler and his critics gets played out here in this remarkable collection, which begins with many quotes from 1890 issues of Pall Mall Gazette.  This collection is filled with insults and accusations, back and forth. Many of the insults are quite eloquent, particularly those of John Ruskin and Oscar Wilde. 340 pp. 15.7 x 20.5 cm. Tan paper on board with tan cloth spine, gilt stamped title is missing gilt. No dj.  Bookplate on front pastedown: "Ex Libris George Schley Stillman".  Very good.  (2195) $26.00. Printed matter

Posted by The Personal Navigator at 7:26 PM