Tour Guide for The Little Wanderers 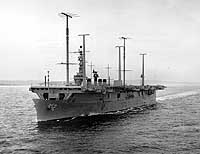 USS Wright (CC-2)
When I left in 1967 I found that I had not made the cut for future submarine duty, which was the path to command for submarine officers.   I thought this was the end of the world, but like a lot of things in life, you don’t know what’s best for you, and people around you may not know, either.
At the time, diesel submarines were being quickly replaced by nuclear submarines, and I, as a diesel submariner, was part of a vanishing breed.  By “not making the cut” I put myself in line to climb the ladder to (hopefully) command a destroyer, and this was a prize for any naval officer.
So, here I was, an ex-submariner, and I was sent to a strange little former aircraft carrier that was neither fish, nor fowl, nor good red herring.
Capt. Frank Romanick was skipper of USS Wright, a small (46,000 ton) carrier converted to a national command authority communications command ship. Romanick was the public relations person par excellence. He lived for seeing his face plastered across a newspaper page, or on TV. He came from command of a naval communications station in the , where he had been known all over the for his publicity tricks.  Now he commanded a ship that, in time of war might have the President aboard.  I was his navigator. 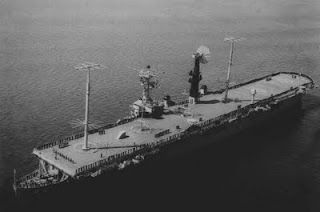 Sailors man the rails aboard USS Wright, 1968
This was a remarkable ship— it had once been a light aircraft carrier, but was now converted to a super state-of-the art floating communications station, a “National Emergency Command Post Afloat”.  Large antennas sprouted from the flight deck, and we had a helicopter that would often lift a heavy wire antenna several thousand feet in the air, its other end tethered on the ship, to experiment at sending signals if this ship took over from shore facilities in in time of a nuclear war.  This was just at the dawn of satellite communications.
The central part of the ship was called “The Box” and it contained all the communications systems and an operations control center manned by a special team of officers and enlisted men from all the armed services, and NSA, CIA and so forth.  We even had a grandiose state room called “Flag One” which was designed for the President, who was then Lyndon B. Johnson. It even had the array of three television sets that LBJ always demanded  wherever he went. [In those days he wanted to watch NBC, CBS and ABC at the same time.  It would have blown his mind to have to watch CNN, Fox, MSNBC and all the rest!] 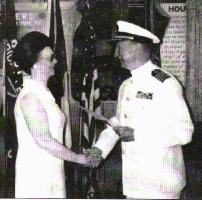 by Butts, Isaac Ridler 1849 : I.R. Butts, . Butts (1795-1882) published a whole mass of guide books  for Sailors, Seamen and Fishermen. This Seaman's Assistant provides guidance for Rights of Merchant Seamen, including hiring, when they may desert, right to salvage, wages (including tables) and punishment. "...a master might be excused for knocking a seaman down, under the influence of sudden passion, from provocation by language of gross insolence.....(further) kicking and beating the fallen seaman ...would not be justified."  "The master is not justified in stripping a seaman naked, and inflicting  a severe punishment with a cat; at least not for ordinary violation of the ship's discipline." Also included are Coaster's Guide, Fisherman's Guide, including Bounty in Cod Fisheries, Mackerel Fishery, Pickled Fish; Shipmaster's Manual, Passenger Vessels (Act of 1847); In Appendix is Navy Ration for victualling, which stipulates 4 lbs. of beef per week per man, 3 lbs. pork, 1 lb. flour, 1/2 lb. raisins or dried fruit, and 1 3/4 pints of spirits.  Also guidance for Common Carriers, Marine Insurance and Book-keeping.. 120 pp. 11 x 18 cm. Paper on board with cloth tape spine, parts of cloth tape on spine missing, inside back hinge cracked, pencil inscriptions on back pastedown and back endpaper. Fair. (4742) $290.00. Nautical
Spirit of Sail: On Board the World's Great Sailing Ships 1987 New York, NY Henry Holt & Co. 175 pp. 24 x 31 cm. This is a magnificent work, with beautiful photographs aboard the finest tall ships in the world, by Peter Christopher, with text by John Dyson. Cloth on board, excellent condition. Dj has two minor scratches, else excellent. (0719) $40.00. Nautical/ Picture Books.
Table compares Armies and Navies of the World, and tonnage of ships under sail or steam, 1882 1882 Graphic presentation shows relative size of shipping fleet in tons; Size of armies and navies in numbers of men.  and led the world in shipping, with 3,621,650 tons under sail; 3,335,215 under steam, with second with 2,366,132 under sail, 1,221,206 under steam.  had 20,930 tons, all sail. had the largest army in the world, with 717,747 soldiers, next was with 714,958, and with 518,642, with 449,239. had the largest navy with 69,540 sailors; and were next, with 50,915. The , just 17 years after the Civil War, had only 25,186 soldiers and 12,230 sailors. 1 page     17.5 x 24.5 cm.       Colored plate, good. (7722) $24.00. Navy/Nautical
Tales of the Coast and a Brief History of the Merchants & Miners Transportation Co. Seventy-fifth Anniversary 1927 : Merchants & Miners Transportation Co. Seventy-fifth anniversary publication offers stories of life and high adventure in the old days along the Atlantic seaboard. Frontispiece shows painting of Duel between Blackbeard and Maynard.  of and , June 1, 1813. History of Merchants & Minors, from 1852. Thomas C. Jenkins, first president of company. Capt. Solomon Howes was master of Company's first vessel in 1854. Includes fold-out map of United States Eastern Seaboard with mileages from various points to and from . 63 pp. 13 x 19 cm. Paper on board, spine suntanned, very good. (1478) $29.00. Nautical/History 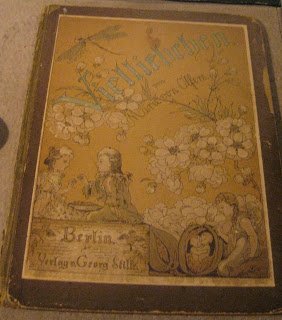