Some interesting old paths to take….

Going there is most of the fun! 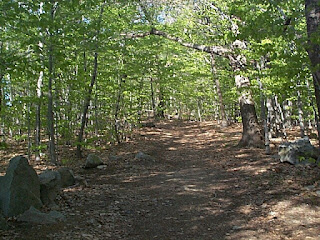 Imagine seeing a whole troop of Swedish and Finnish workers walking through here!

Go for a walk in Rockport, and not only can you enjoy nature—you can also imagine the scene from a century ago.
Look at the forest trail in the picture above, and imagine scores of workers, mostly Scandinavian, striding through the woods, lunch pails in hand, on their way to put in a full day in the granite quarries.
You can almost see them now---  throngs of Swedes and Finns.  Rockport gained its name from all the granite on .  From about 1820 on until after 1945, Scandinavian immigrants came here, generation after generation, to do the back-breaking work of blasting huge granite chunks from the quarries.
Pigeon Cove, the northern part of Rockport, was where the Korpis, Seppalas, Carlsons, Johnsons and Hautalas lived.  They walked through these woods to go to work in the quarries.  Today, seventy years after most quarries closed, you can still see little clues to the life they lived. 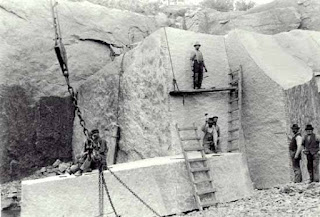 The granite these men quarried was carried on huge flatbeds pulled by oxen.  They carried it down to a pier nearby and hoisted it aboard barges which took the massive blocks down the coast to and , where much of it is still in place in buildings there. 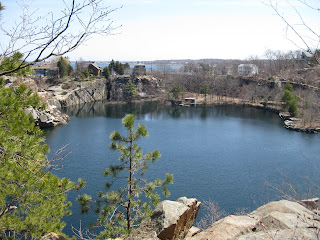 Flat Ledge Quarry in Rockport, with ocean in the distance. It’s a peaceful scene now, but imagine that quarry empty of water, with men and oxen across the wide bottom, removing the granite.  In 1872 they built a railway to replace the ox carts in moving the granite down to the seashore.

All those Swedes and Finns, and some Norwegians and Danes, too, were a big change when they joined the original collection of old Yankees in Rockport.  Many families had worked in quarries back in their home countries, and so the hard work of drilling and chipping and hoisting was no surprise.  Neither was all the granite dust these men breathed in their 12-hour shifts.
The women, and even some men in these families still have the traditional costumes of home, and every June at the Summer Solstice they celebrate Midsommar (Swedish), or Keskikesä (Finnish) or Midtsommer (Norwegian) or Midsommer (Danish) in Millbrook Meadow and down at Spiran Hall, Scandinavian headquarters in town.
In the old country there are also bonfires, but in Rockport we wait until the Fourth of July, when we have a large Fireman’s parade followed by a huge bonfire. 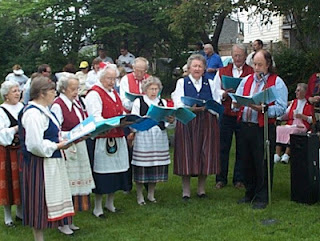 Finns, Swedes, Norwegians and a few non-Scandinavians
join to celebrate Midsommar in our Millbrook Meadow

If you come here to Rockport, we have some great trails for jogging or walking, and for cross-country skiing in the winter.  Walk right up , very near the train station and you are soon at Pool’s Hill where you can take one of several trails that lead you into dense woods for several miles, traveling through Dogtown.  Dogtown is some 4000 acres of rock strewn watershed woodland, pocked with quarries, between Rockport and .
Three hundred years ago, a few families of the most colorful sort lived in Dogtown.  [Read Anita Diamant’s novel, The Last Days of Dogtown for a fascinating look back at those days.  It’s fiction, but the real history is about as quirky.] 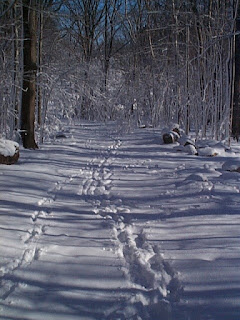 Pool’s Hill, looking out over Rockport. The workers trooped down this snowy path all winter.  If the snow got too deep, they had to take the tram. 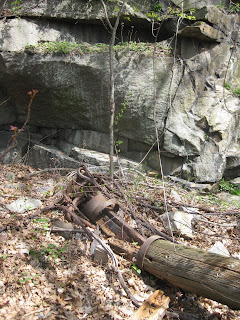 Here are  the remnants of an old wooden derrick, held together with steel bands,  with old cables still attached, left over from the Nineteenth century.

A town with several miles of Atlantic coastline also has some delightful trails that take you right along the water’s edge on “The Atlantic Path”. 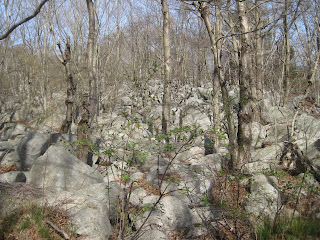 A river of boulders and rocks rolls down a hill in the woods south of Rockport. This may be the result of the glaciers that covered 21,000 years ago. 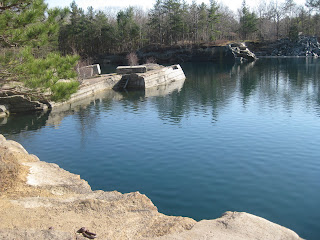 This is Steel Derrick Quarry, a popular Rockport swimming location.  This is also a backup water reservoir for the town. 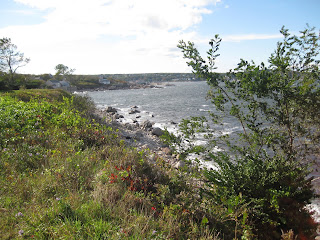 This is the Atlantic Path—a narrow footpath right along the tops of the cliffs.

: Ye Headlands of Cape Ann-- Real Estate Advertisement by Giles, Jason 1902 Rockport, MA: The Rockport Review. 32 pp. 23 x 15 cm. Booklet tells history of Rockport as it offers a parcel at the Headlands of the property.  Property is served by water and electric lights, with an easy walk of eight minutes to stores, markets and post office, and in ten minutes, to the B. & M. R.R. railway station.  Booklet shows the beginnings of granite breakwater in harbor, intended to provide '' for the North Atlantic Squadron of U.S. Navy war vessels during the summer months.  Photos of local sights, including two page spread showing photo of town and harbor, taken from belfry of the Congregational Church. Paper booklet, very good. (7282) $59.00. Travel/History 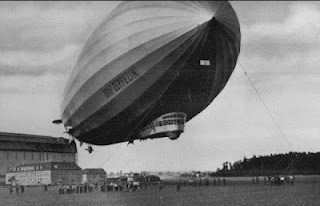 Posted by The Personal Navigator at 6:36 PM