ARE WE GETTING SMARTER? 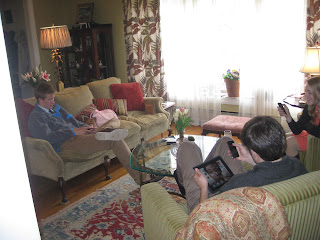 It was Easter, and our grandkids were taking a break between dinner and dessert, in order to connect to the vast world of their friends and interests.

With the plethora of electronic aids to our brains, one might think we are becoming a society of brilliant communicators, able to pluck the most obscure knowledge from the clouds, to assist us in scintillating writing and conversation.
A new may be on the horizon, with even the simplest soul able to transcend his or her meager education and understand the wisdom of the ages.
As an elder American I often think wistfully of those days when we went for days without communicating with anyone except face to face. It’s a whole new world, and I’m sure that it will get more electronically connected as time goes on.
Consider the article below.  Imagine—QR codes on gravestones!

"I go and talk with him," said Faye Garneau, who admits she isn't so sure she likes that her own name is already inscribed there, too.

That wasn't all: Several months later, the monument maker added a high-tech innovation — a small, square image known as a quick response or QR code, affixed alongside the big letters spelling out Garneau.

The monument maker — a friend — was working on the code before Garneau died of cancer at age 78.

People scanning the code with their smartphones are taken to a website that includes Garneau's obituary and a photo gallery highlighting the Seattle-area businessman. They learn he was a collision auto body repair expert, a world traveler and a loving uncle. In the future, more photos and stories from family and friends can be added.

"I think it's a neat deal," Faye Garneau said. "It kind of keeps people alive a little longer, down through the generations."

The Seattle-based tombstone company is one of many new adopters of quick response or QR codes that also includes, a nature trail and a T-shirt maker.
New uses for the technology are popping up almost daily, said Shane Greenstein, a professor at in , who studies IT markets. That's because "the bugs are worked out" from the code, which was created in in the early 1990s, Greenstein said, adding that "there's no licensing fee; there are no restrictions. Users are free to think creatively." And, they are.
In , Quiring Monuments has made code-adorned "living headstones" for about two months. It has sold about 30 so far, General Manager Jon Reece said, adding he's gotten "tons" of inquiries, often from people still very much alive: "They say, 'I want my story to be told the way I want it to be told.'"
Quiring Monuments offers the QR code, website and website hosting free to people buying new monuments from the company, Reece said, noting the company will add it to existing grave markers for $65.
On , the J.N. "Ding" Darling National Wildlife Refuge unveiled QR code signs last month along , on which nearly 800,000 visitors a year travel by car, foot or bicycle.
"It was nice and easy," said 13-year-old Tom Garvey of , who put his iPhone — an eighth-grade graduation gift — to use on the trail. The refuge's iNature Trail sports 10 signs, each with two QR codes — one that pulls up videos and educational websites for adults, and another that's tailored to children.
"We wanted to find that niche to get kids outdoors and excited about nature," said refuge ranger Toni Westland. The videos feature snippets about ospreys, alligators and other creatures living along the mangrove forest-dotted estuaries of the 6,400-acre refuge.
Newspapers, including TODAY, use the codes to direct readers to such items as videos and photos.

A multitude of uses

•Lafayette, N.J.-based Fuzzy Nation, a designer and wholesaler of gifts for dog lovers, for the first time is putting QR codes on hangtags on its products sold at Macy's department stores nationwide, said Fuzzy Nation owner Jennifer Liu. The scanned code helps people enter a contest that began July 11. The contest promotes pet adoption and will earn one shelter a $10,000 stipend.

•Organizers of the Chevrolet Fireball Run Adventurally, from Sept. 23 through Oct. 1, say it will be the first national motoring event to use QR codes. For this year's multistate run though the South, competition cars will sport decals with codes. And, driving teams will distribute missing-child posters with codes. The scanned codes aid people with crucial information to share with the for Missing & Exploited Children, said J. Sanchez, event executive producer.

•Trinity Baptist Church in , is using QR codes in its bulletins and posters to encourage sign-ups for special family and youth programs, said Steven Haney, church media director.
Real estate sales agent Marilyn Boudreaux did a double take when spying a code for the first time in the church's bulletin: "I was like, wow — we are with the times."
Her discovery occurred shortly after the worship service began. That made the QR code a temptation, Boudreaux said: "I wanted to pull out my phone, and scan it." 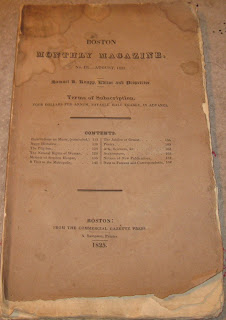 Monthly Magazine, No. III, August, 1825 Knapp, Samuel L. Editor and Proprietor. 1825 : Samuel L. Knapp. 54 pp.           14.5 x 24 cm. Brilliant little magazine, in its third issue, aimed to present American literature instead of European."Nugæ Historiæ" (Gossip of History) "Quicquid agunt homines, votum, timor, ira, voluptas, Gaudia, discursus, nostri est farrago libelli."--Juvenal, Sat. I.  From Col. McLane's Journal, this is an interesting summary of General Washington's operations in the Revolutionary War, with Lafayette, a youth of uncommon spirit, and Baron Steuben, an experienced Prussian soldier, against Lord Cornwallis and Gen. Howe. Continued. "The Natural Rights of Woman" Tongue-in-cheek piece about man, since he was created 6000 years ago, has become wiser than his maker, and much wiser than woman. Written by D'Anville, "a woman who resides near us."  "Memoir of Stephen Hooper" read before the Boston Debating Society by Samuel L. Knapp. Hoope was born at April 8, 1785, called to the bar in 1811. "A Visit to the Metropolis" by Agricola (Farmer), Letter dated June 21st, 1825, written after the corner stone of the was laid. Recent fire has removed undesirable buildings to make way for new.   Interview of in the Grand Lodge of Massachusetts in the masonic halls of the old State House. Masonic ceremony to lay the corner stone. Address of Mr. Webster. A momentous event! Magazine, front cover waterstained, back cover torn near spine. Edges worn and frayed. Fair.  (8234) $50.00. History 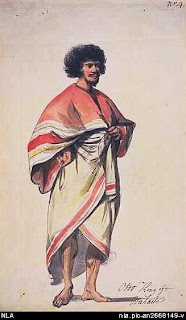 American Baptist Magazine and Missionary Intelligencer, May 1820, Vol. 2 No. 9 , : Baptist Missionary Society of . Memoir of Rev. Henry Jessey. Review of sermon delivered at the ordination of Rev. Stephen Chapin by Jeremiah Chaplin, Professor of Divinity in the Maine Literary and Theological Institution, at . Extract of letter from , Serampore by W. Ward. [Note: Ward was among founders of this College in  in 1818. It still exists in 2008.] College is open to all denominations of Christians, and to as many heathen scholars as choose to avail themselves of its exercises and lectures. Letter from Pomare, King of Otaheite,. Report on efforts to Christianize American Indians of the  and Stockbridge; letter signed with marks by Oneida Indians asking to embrace Christianity. 34 pp. 15 x 24 cm. Paper periodical, edges frayed, page corners curled, poor. (6399) $34.00. Religious/Missionary

American Baptist Magazine and Missionary Intelligencer, September 1820, Vol. 2 No. 11 , : Baptist Missionary Society of . Frontispiece engraving of Rev'd James Manning Winchell, A.M. late pastor of the    in . Memoir of the death of Mrs. Tamma Winchell, Rev. Winchell's widow. Tribute on death of Rev. Edward W. Wheelock, who, dying of consumption, left  for , and died at sea. Letter from Mrs. Colman on the Burman Mission, mournfully relates last days of Rev. Wheelock. In letter to her sister she chides her for not answering for "nine long months" and goes on to tell her about revival of Buddhism in , and building of pagodas.  32 pp. 15 x 24 cm. Paper periodical, edges frayed, page corners curled, poor. (6400) $34.00. Religious/Missionary


Americans eagerly awaited this monthly religious paper:
American Messenger, May 1856; "Behold I bring you good tidings of great joy, which shall be to all people." Luke 2:10. Vol. 14. No. 5 : The American Tract Society. Americans eagerly awaited this monthly religious paper. National news, religious commentary. Missionary news. Statistics on intemperate persons among the inmates of the  almshouse: 60%. Mr. John Sadlier, member of the Parliament from , has just committed suicide, after having been engaged in enormous frauds. 4 pp. 38 x 56 cm. Newspaper,  very good. (5360) $20.00. Religious/History

American Messenger, June 1858; "Behold I bring you good tidings of great joy, which shall be to all people." Luke 2:10. Vol. 16. No. 6   : The American Tract Society. 4 pp. 38 x 56 cm. Americans eagerly awaited this monthly religious paper. National news, religious commentary. Missionary news. Bishop McIlvaine's Address at 33rd anniversary of the Society. Position on "anti-slavery".Minnesota was admitted into the confederacy of the  May 12, making the number of states in the Union 32.  to adopt the new style of calendar, so that by 1912 their calendar will coincide with the Gregorian. The children's missionary vessel,"Morning Star" since arriving at the  in 1857 has made two important cruises. Newspaper,  very good.  (5372) $20.00.  Religious/History 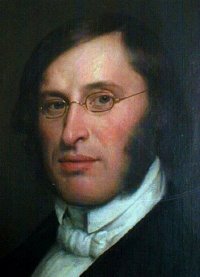 Andrew P. Peabody: Three Sermons preached at the  , , December 25, 1859 and January 15, 1860 by Peabody, Andrew P., D.D. 1860Portsmouth, NH: , Jun. & Joseph H. Foster. Andrew P. Peabody became famous at the  when he stormed against the American victory in the Mexican-American war in 1847. A lifelong pacifist Unitarian preacher, Peabody was a champion of abolition. These three sermons, preached just before the start of the War Between the States, display his eloquence, religious fervor and absolute dedication to the Gospel of Christ. His last sermon is a Vindication of Unitarianism. 32 pp. 14 x 22 cm. (6441) $31.00. Religious/Unitarian 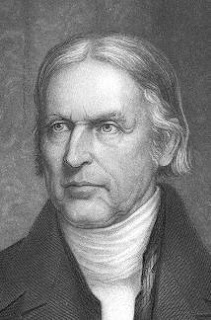 Posted by The Personal Navigator at 9:13 AM