April 22 is Lenin’s Birthday—how about a 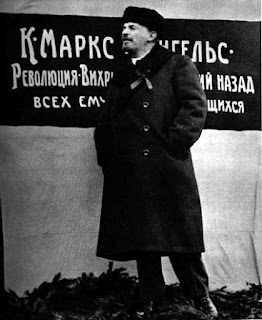 Sunday, April 22, is Lenin's Birthday.  He'd be 142.   It is also Earth Day, and it is not a coincidence.  It's regrettable that the Communists of the world seem to think that they are champions of preservation of the earth, because in the they were very sloppy stewards. However, every year, even today, long after the is gone, Russians observe his birthday with volunteer clean-up events. 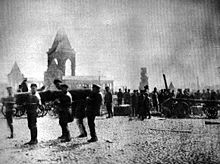 The Soviets celebrated Lenin's Birthday with Subbotniks all over the country.  A Subbotnik is usually on a Saturday (Subbota, in Russian) and it's a day when good Soviet citizens are expected to get out and clean up a park or a neighborhood, and they offer their labor for free.
We lived in the when Leonid Brezhnev was General Secretary.  It was 1981 when we arrived, and 1983 when we left.  The Soviet Union at that time was seedy and threadbare, from to , across 11 time zones.   It was a country nearly on life support, struggling to fight a war in .
Yet, seedy or not, we all knew that the had a vast array of nuclear weapons, and they could blow us to kingdom come.

It must have been a subtle thing when, I understand, a group at started Earth Day, and set the day for April 22.  In the the big Subbotnik fell on the Saturday nearest to Lenin’s Birthday.

We celebrated Earth Day in Rockport on Saturday, April 21.  I have a healthy lack of respect for communism and all its trappings, but today did seem like a good day for us to get together and do some cleanup in our Millbrook Meadow here in Rockport.
Our winter was remarkably short on snow, but it was cold enough, and here we appreciate Spring far more than people in more temperate climates.  And it really felt good to whack and cut tree branches and vines that had all grown together to practically dam up the little brook that runs through our Meadow.
Fourteen of us cut, dragged branches and raked, and made several huge piles, to get our Meadow ready for Spring and Summer, and still more Rockporters from the Garden Club cut and bagged hundreds of pounds of that sneaky, elusive and all-encompassing Japanese Knotweed. 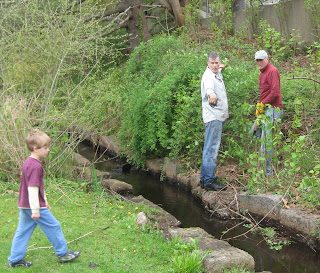 Not to change the subject, but here are some books and papers that I offer:

V.O.K.S. Published by the Soviet Union Society for Cultural Relations with Foreign Countries, Vol. II No. 4, 1931 by Yoffe, Yakovlev, Semyakin, Mikhailov, Tsypkin, et al. 1931       Moscow, USSR: VOKS,  Trubnikovsky Pereulok, 17. 100 pp. 17 x 26 cm. V.O.K.S. (Vsyesoyuznii Obschestvo Kulturniyi Svyazii Zagranitsiy), All-Union Society for Cultural Relations with Foreign Countries was founded in 1925 and widely recognized as Stalin's heavy-handed effort at foreign propaganda.  "The Planning of Science"-- how it is done with the new Five-Year Plan, by the new socialist people. The language of the "Dictatorship of the Proletariat" referring to the "shock-brigade troops and the storming detachment of Communist Youth" is so obviously immature, in its attempt to speak to a sophisticated foreign audience, yet satisfy all the propaganda needs of an ignorant bureaucracy at home. "Tecnics of the Future" by Academician A.F. Yoffe. talks of new ideas for harnessing solar energy, and efforts to harness water power (Volkhovstroi, Svirstroi, Dneprostroi). Poem "Industrial 1931" by Vassili Semyakin, a worker in a Moscow Co-operative Candy Factory. "The Fight for the Metal" story by N. Mikhailov, worker at the "Sickle and Hammer" Sheet-rolling Factory produces a fanciful story of the massive effort in the factory to fulfill the Five-Year Plan. Photos and text tell story of return of Maxim Gorki to in May, 1931. "What is Polytechnical Education?" by I. Pistrak includes photos of men and women learning on heavy machines. "Sverdlovia" by E. Ukhalov. Photo essay shows foreign workers in the ; Italian woman instructs Uzbek women workers in silk mill.  Periodical, heavy cardboard cover loose from text block, spine worn, edges frayed. Fair. (8126) $85.00.  History/Propaganda/Soviet

: 's New Revised Complete Guide and Descriptive Book of  by Campbell, Reau1 1909 : Reau Campbell.  Very attractive, fresh-looking guide book to Mexico, written by a long-term scholar and traveler in Mexico, with many black and white photographs, taken in years before Pancho Villa and the events of 1914. Frontispiece is Photograph of President of Mexico, Porfirio Diaz (1830-1915). This book has geography, history, information about all parts of country.  Chronology of events includes 1908 merging of two national railroads.  Includes a very nice fold-out colored map of and inset maps of , D.F., etc.   352 pp. 14 x 18.7 cm. Maroon cloth on board with gilt decoration including Aztec figure and title. Spine title slightly faded, small crack inside rear hinge, yet very good. (4143) $26.00. Travel

: A Brief Guide to Al-Haram Al-Sharif Jerusalem, published by the Supreme Moslem Council 1929 : Supreme Moslem Council. Guide describes"The August Sanctuary", a sacred enclosure of about 145,000 square meters. The two principal edifices are the Dome of the Rock and the mosque of al-Aqsa. Guide advises visitors of sacred nature of site, and warns not to smoke or bring dogs. Black and white photos of Fountain of Qait Bay, and Pulpit of Burhaneddin, Dome of the Rock, al-Aqsa Mosque exterior and interior.  Booklet was used as entry ticket, and so a perforated triangle on back cover about 6 x 5 cm is removed.  16 pp. 16.4 x 21 cm. Paper booklet, bound by two staples. Clean. Perforated upper left hand corner of rear wrap removed. Booklet has two holes punched in fore edge throughout, this is apparently standard for this guide book. Very good. (8108) $65.00. Travel/Religious 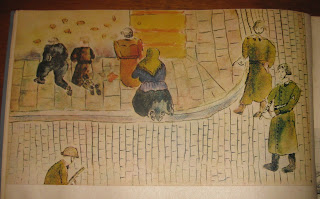 W Oczach Dzieci: 10 lat Polski Ludowej w rysunkach dzieciecych [Through the Eyes of Children: 10 Years of the Polish People] In Polish. Zagala, Boleslaw; Jackiewiczowa, Elzbieta 1954 : Nasza Ksiegarnia Warszawa.  Collection of delightful, full-color drawings by children during the years of World War II when Nazis occupied the country. Drawings include one labeled Wysadzenie pociagu niemieckiego przez partizantow polskich [Polish partisans blowing up German train], by Andrzej Wolniewicz, 13. Ewa Mehl, 7 draws a picture "Daddy Takes a Walk" shows prisoners in a concentration camp. Janina Piekarska, 14, drew a picture of Nazi soldiers arresting Polish people, all shown kneeling.  The children captured the terror and cruelty, and the heroism of liberators, and then rebuilding the country after the war. This copy has mimeographed summary in English pasted in front of book, and translation of titles of drawings pasted in back of book. ~85 pp. 28 x 20.6 cm. Blue-grey cloth on board, front hinge cracked, text block good, with added sheets containing translations. Good. (5377) $55.00. World War II/Poland

Democrat, , Friday, February 17, 1843 Wright, Isaac H., Editor 1843 : Wright & Ballou, Proprietors, No. 14 Brazer's Building. Report on The Democratic Festival in Boston:  On Thursday, 9th February the Council, Senators and Representatives formed in procession at the Doric Hall of the State House, under the direction of Col. Peter Dunbar, Chief Marshal, and, preceded by a brass band, marched from the State House to Faneuil Hall, passing through Park, Tremont, Court, State streets, and Merchants' Row, in a Grand Triumphal March.  At 6 p.m. the Governor arrived, and there was a grand feast, but without any spiritous or fermented beverages.  List of all the toasts, including several that twisted the tail of Federalists, or Whigs. Discussion on the bill in Congress at . Death of Isaac Hull at .  Laudatory letter to Massachusetts Democrats from Martin Van Buren.  4 pp. 42 x 60 cm. Newspaper, worn, fair. (8100) $27.00. Newspapers

Posted by The Personal Navigator at 2:09 PM