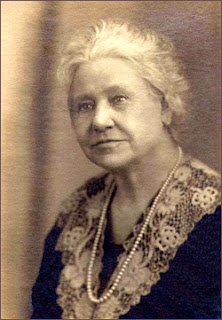 I hope my wife doesn’t find out.  I’ve taken quite a fancy to Mittie.
You should see her—a stylish woman, nicely dressed.  She walks up the gangplank of S.S. Wyanoke, one of the steamships calling in , carrying a basket of “Official Railroad Guide and Temperance Advocate” and she’s handing them out to passengers.
On my copy she has penned “Compliments of Mittie”. 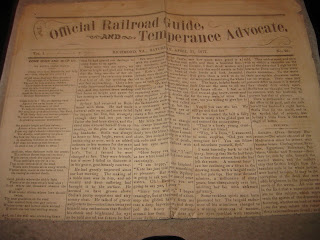 Mittie Point Davis Miller is a writer, and the newspaper she is handing out is full of her stuff. When she’s not delivering papers, she’s writing, turning out serialized fiction, poetry-- everything and anything to fight the evils of drink. This copy of The Official Railroad Guide  gives you the  sense that this woman is everywhere fighting for her cause. Mittie Point Davis is the main writer for this paper, for distribution at train stations and steamship berths in . In the last part of a serial "The Cardinal Bow" she writes about a "cold-water wedding" with lemonade as the main refreshment. The message is: "Don't Drink!" throughout.

Mittie Frances Clark Point  was born in Hanover Junction, Virginia in April, 1850.  Hanover Junction, just 25 miles north of , was where two railways intersected, and the site of many Civil War skirmishes as Confederate and forces fought for access to or denial of the railroads.
The Points moved to in 1860 and Mittie attended the Richmond Female Institute, graduating in 1868.  She took her first job writing for The Old Dominion, a magazine.  Soon she married a handsome Confederate veteran, Thomas Jefferson Davis, ten years older than herself.  She quit her writing and settled down to be a wife and mother.  was born. Her husband encouraged her to take up writing again, and soon she published her first novel, Rosamond. The young family moved to , where Tom took a job as bookbinder with the Government Printing Office.  However, after two years he died of tuberculosis that he had contracted during the Civil War. Baby died soon after.
With her family gone, Mittie launched her writing career with great energy, but very little compensation.

I met Mittie through the work she did on The Official Railroad Guide and Temperance Advocate.  In the copy that I acquired, she had little pen marks in several places, and her by-line was all over the paper, including the last chapter of a serialized story.  This was 1877, and Mittie was 26 years old and a widow.
The next year, 1878, when Rutherford B. Hayes was President, she met and married Alexander McVeigh Miller.  They had a daughter, Irene.  Miller’s dad gave the couple ten acres of land in , and in 1881 they moved there, and started building a home.  Mittie was cranking out romances by now, and starting to earn money, and they were able to build a house.  Over the next five decades, Mittie turned out some 80 Dime novels, and got to be quite well known.  Her husband tried several professions; Mittie was earning enough to let him run for Congress.  He was elected and served for several years.  In 1908 Mittie found out that he had been philandering, and divorced him.  She lived in with her daughter Irene, and then moved to , where she died in 1937, at the age of 87.
The Miller home became “The Cedars” and is now on the National Register of Historic Places.

Here the Personal Navigator offers some papers that spread the message of Temperance, as well as quite a few other messages:

Official Railroad Guide and Temperance Advocate, Vol. I., No. 26, April 21, 1877,
You can just see her now-- a stylish woman, nicely dressed, carrying a basket of these newspapers aboard the S.S. Wyanoke, or one of the other steamships that called in Richmond each day. And when she wasn't delivering papers, she was writing, turning out serialized fiction, poetry-- everything and anything to fight the evils of drink. This copy of The Official Railroad Guide has the words "Compliments of Mittie" written in the title block of the paper, and you sense that this woman was everywhere fighting for her cause. Mittie Point Davis seems to write nearly everything in the paper, for distribution at train stations and steamship berths in . In the last part of a serial "The Cardinal Bow" she writes about a "cold-water wedding" with lemonade as the main refreshment. The message is: "Don't Drink!" throughout. The issue contains excellent train, steamship and hotel information and ads. 4 pp. 31 x 45 cm. Paper periodical, small closed tears at centerfold. Good. (3546) $49.00. History/Temperance.

American Messenger, May 1856; "Behold I bring you good tidings of great joy, which shall be to all people." Luke 2:10. Vol. 14. No. 5 : The American Tract Society. Americans eagerly awaited this monthly religious paper. National news, religious commentary. Missionary news. Statistics on intemperate persons among the inmates of the almshouse: 60%. Mr. John Sadlier, member of the Parliament from , has just committed suicide, after having been engaged in enormous frauds. 4 pp. 38 x 56 cm. Newspaper,  very good. (5360) $20.00. Religious/History

Delights of Wisdom Concerning Conjugial Love; After Which Follow Pleasures of Insanity Concerning Scortatory Love by Swedenborg, Emanuel 1852 : Otis Clapp. 438 pp. 14 x 23 cm. This book is widely available in new reprints and electronic versions. This 1852 version contains an 1833 "Advertisement" explaining the English translation from the original 1768 Latin edition. Readers when this edition appeared in 1852 must have been amazed, because Swedenborg does not mince words. Swedenborg presents love and sex as high-minded, and altogether connected with the will of God. He teaches that conjugal (conjugial) love between husband and wife is good and extends through child-rearing and abstaining from selfishness. However, he also deals heavily with all the unfavorable, immoral parts of love and the love of sex, including "Scortatory Love" or fornication, and polygamy, jealousy, adultery, lust and consorting with harlots.  A man becomes less of a man when he surrenders himself to scortatory love. Decorated blind-stamped black cloth on board with gilt title on spine, edges frayed. Inscription on front free endpaper: "Miss Ruth H. Smith--From her affectionate pupil-- Fanny E. Loring, June 30th, '54". Text block quite clean.  Overall good condition. (2308) $59.00. Religious

Daughters of Temperance, Report of the Proceedings of the Grand Union, State of , from April 1848 to January 1849 : William F. Geddes. Minutes of meetings, financial reports. Sister Nichol was found to have revealed affairs of outside, suspended for six months. Big dispute at national convention., minutes describe how delegation's credentials are not recognized, how dispute raged around whether Sister Hammond or Sister Schnider should be on the delegation. 47 pp. 11 x 18 cm. Paper booklet, worn, slightly foxed, good. (4306) $27.00 Ephemera/Temperance

Journal of Missions "The Field is the World" , September, 1855 , MA: American Board of Commissioners for Foreign Missions. Summary of Intelligence: North American Indians. Choctaws, 121 have professed their faith as Christians. Cherokees: Four have joined the church, and the cause of temperance wears "a somewhat brightening aspect." Ojibwas. Not so good, little interest in education for their children. But we have noted a marked change for the better in temperance. We have not seen a drunk Indian for two years. Report from : Cholera has abated, but still prevails at Tillipally. Small-pox is prevalent. "Has anything been done by the to in 25 Years?" Report by G.B.W. from Beyroot notes that work has been attempted and steadily persevered in. Reports from Hindustan, , and . Facts about the , or Ascension by one of the Micronesian Missionaries. 4 pp. 38 x 55 cm. Newspaper, paper very durable, with small stains, good. (7142) $26.00. Religious/Missionary

Young Man's Friend, The: Admonitions for the Erring; Counsel for the Tempted by Daniel C. Eddy. 1854. : and Wentworth. Dissemination of puritan principles for young men. Elements of a manly course. Dangerous amusements (includes social drinking). Gambling. Intemperance. Inscription in front: "Jonathan B. Ackerman--A birth day present by his wife, Aug. 2nd, 1854"  Marker in section warning about gambling. [What a subtle gift!!] 276 pp.  Good condition, leather on board with gold embossed design. Gilt-edged pages. (0148) $32.00. Religious. [What a great birthday present from your wife!!]

Posted by The Personal Navigator at 7:18 PM