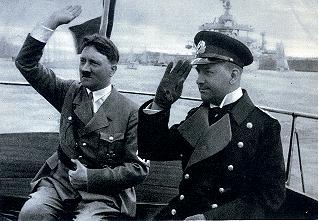 Hitler and Admiral Raeder inspecting the German Fleet
“Don't You Know There's a War On?” That was a question that Americans asked each other over and over all during World War II, whenever one person noticed another who didn’t seem to be observing rationing, or who complained about the shortages of meat, sugar, butter, clothing, tires for your car, and many other things.
It's hard for people today to understand how The War (1939-1945) filled up the lives of everyone some 70 years ago.
First, men and some women from nearly every family left to serve in uniform. Men were drafted, or enlisted, in the Army, Navy and Marines, and were fighting in Europe, , all over the Pacific. 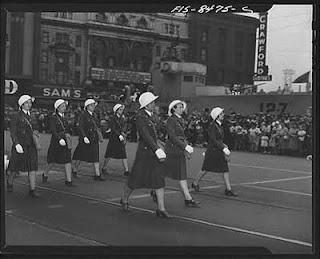 Women Defense Workers march in WWII Parade
Women joined the WACs or the WAVEs, as well as the Nurse Corps of the Army or Navy.
Many more women took jobs in the defense industry, building warships and airplanes, tanks and bombs.  They worked alongside men too old to serve in uniform, or otherwise exempted.
Even kids were involved in the war effort— we took part in collection drives to gather paper for recycling (although they didn’t use that word then); we collected tin cans, toothpaste tubes (they were made of lead then, and could be re-used for bullets), even waste cooking fat, which was used for manufacturing explosives.
Meat, butter, sugar and many other foods were rationed, there were no automobiles to buy, tires and gasoline were rationed. You pasted a sticker on your windshield that reminded you to limit your speed to 35 miles per hour.
We all bought War Bonds, and kids bought Savings Stamps, to convert to a bond. The War was on everyone's lips. And Anti-War Protests?  That would have been treason!  After December 7, 1941, any public discussion about whether or not we should be at war just disappeared
I was seven years old when the Japanese bombed .  That attack on December 7, 1941 brought the into World War II, a war that had already been raging for over two years.
I’ve collected some books and papers over the years that tell about what people were experiencing during the war, and report what happened after the war, when we could learn more.