Chamberlain and the Blue Angels, in one moment 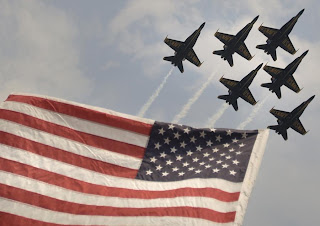 Navy’s Blue Angels
While the whole east coast trembled with anticipation of Hurricane Irene, on Saturday (Aug. 27) we decided to drive up to to shop for antiques.
We wound up in , and looked for David Day’s Antiques, right in the center of town, on Park Row.
was called Pejebscot when it was settled in 1628, and renamed a century later. It is home to , and from 1943 to 2010 was home to Brunswick Naval Air Station.
If you drive along Route 1 from Portland north, all you see of Brunswick is strip malls—gas stations and fast food joints. But, just a couple of blocks away is a charming little town that has been a strong part of since its settlement nearly four centuries ago.
As we drove along Park Row looking for this antique shop, we noticed a bunch of antique-looking tents set up on the town green.  Then we saw some antique men, most of them looking like they were ready to find some Rebels to fight.  They were suited up in 1861 style, with blue Union army uniforms.  A few men were wearing 1861-era civilian clothes, and some women attired in bonnets and long dresses were selling Civil War era baked goods, including molasses cookies and hardtack.  For 2011 prices.  They were celebrating “Chamberlain Days”, an annual event. 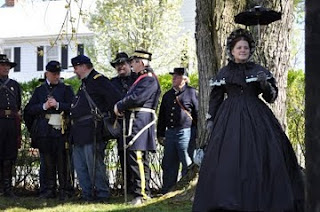 Re-enactment
Marty, my wife, made a bee-line for the antique shop, which contains approximately one million antiques, large and small, stuffed into three floors of an elegant old home on one of ’s fine residential streets.
I continued to watch these Civil War re-enactors, when who should arrive, in a station wagon but Brevet General Joshua Lawrence Chamberlain!  The license plates on his car said “BG  JLC”.

Gen. Chamberlain (1828-1914)
General Chamberlain was born in in 1828, graduated from Bowdoin in 1852, and later returned to teach here, (and later was president of the college).  In 1862 he obtained a commission as a lieutenant colonel in the 20th Maine Volunteer Infantry Regiment. During the Civil War he fought in 26 battles and numerous skirmishes, was wounded six times and had six horses shot from beneath him.  He led the 20th as they heroically held the extreme left flank of the Union line against a fierce Rebel attack (16th ) at the battle of Little Round Top at , and later was chosen by General Grant to receive the formal surrender of weapons and colors from the Confederate forces at .
Now, here I saw General Chamberlain, a handsome older man with well-groomed silver hair, getting out of his car, and putting on his sword belt and sword, as he prepared to go see his troops.  (It is difficult to drive a car with sword and belt by your side.)
Just as the General approached his troops, a formation of F/A-18 Hornets of the Blue Angels zoomed over.  The Blues were performing an air show for mid-coast , flying from the former Naval Air Station.
Then it was time for me to carry two small antique tables Marty had bought, and stow them in our car.  Back to reality, and Hurricane Irene.
For us, it was a stirring intersection of American history and American life. 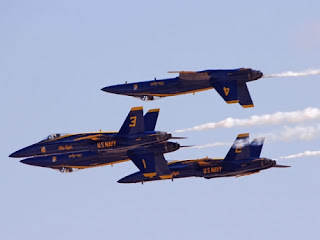 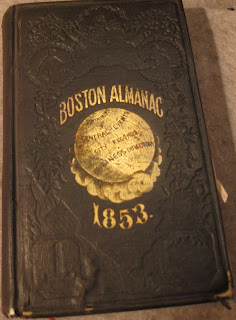 Almanac For The Year 1853 with fold-out map of 1853 : Damrell & Moore, and George Coolidge. Lists businesses, national, state and local leaders. Excellent engravings of local sights. Fifteen page article "Ancient and Modern Boston" by D. J.V.C. Smith compares of 1722 (shown in map) with today (1853). Plans are in works to fill in the whole of between Roxbury Mill Dam and the Neck. He predicts that is "predestined to be the magnificent section of the city, in respect to costly residences, fashionable society and the influence of wealth. Monody to Daniel Webster, who died Oct. 24, 1852. Very interesting ads for ink, removers, carpeting, plumbers, tea, curriers. shell combs, cutlery and more.  Fold-out map of includes Map of Town of Boston in by Capt. John Bonner, 1722, engraved for Boston Almanac 1853, and detailed New Map of Boston Comprising the Whole city with the new boundaries of the Wards, 1853.  Map shows adjacent to , between and . Inset map of . 188 pp.        8 x 13 cm. Cloth on board with gold printing and blind-stamped design. Back cover spine broken,  Map worn, small tears in folds, fair. Overall fair condition. (8173) $68.00. Reference
Watchman and Reflector, December 29, 1870 : Watchman and Reflector. Lively, intelligent religious paper set the tone for a straitlaced, sober readership. Long tribute to Bartholomew T. Welch, D.D.(b. 1794 d.1870) His grandfather was a lieutenant on United States Frigate Alliance, and his father a midshipman on that same ship.  His mother was daughter of Capt. Barthol Trow, one of the tea party. Report of celebration Dec. 21, 1870, of 250th anniversary of landing of Pilgrims at . Instead of a bleak, hostile shore, behold the beautiful town of , and long trains of Old Colony railroad cars bringing hundreds to this jubilee. Editorial decries quarrel going on now in between two of "our" political faith, President Grant and Senator Sumner, both Republicans. 8 pp. 41 x 58 cm. Newspaper, uncut, some tiny holes in folds, good. (8176) $27.00. Religious/History
Contact me at scoulbourn1@verizon.net
Posted by The Personal Navigator at 8:39 AM