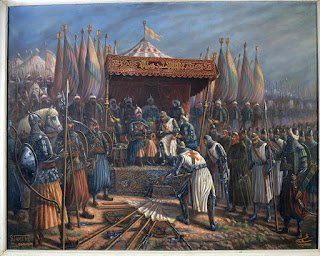 Wednesday, July 31, 2019: The Crusades—what caused them?   The Seljuk Turks; Pisa, Genoa, Venice and Amalfi; Byzantium and Jerusalem; The Children’s Crusade; Attacking the Jews in Germany; The Popes and Kings; Saladin and Richard I of the Lion Heart; how the Christians massacred Moslems and Jews and made Moslems intolerant.
. [Proposed by Sam Coulbourn] 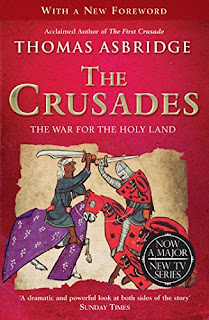 Thomas Asbridge, The Crusades: The War for the Holy Land, London: Simon & Schuster, UK, 2012, 808 pp.
Since September 11, 2001 we have had a mental picture of Islam and the Middle East as the center of an unyielding, backward-looking part of the world, with certain elements dedicated to destroying the West and overrunning Christianity.  In that time American launched a war against the Taliban aggressors in Afghanistan in 2001.  We are still engaged in that wartorn, bedraggled country. In 2003, perhaps with justification that begs questioning, we launched war against Saddam Hussein, leader of Iraq.  We are still engaged there, as well.

Asbridge’s picture of the Crusades begins with Pope Urban II facing division in the Roman Catholic Church. In the Pope’s mind, rejuvenation was needed. His solution in 1095 was to issue a call to arms for Christian knights and their followers to march 2000 miles, from western Europe to Jerusalem, and return that holy city to Christian hands. Knights all over took up the challenge and gathered their soldiers and started the grueling march across to Constantinople, then across the Bosporus into Asia.

Pope Urban really wanted to stir things up that didn’t need stirring. The Muslims had had control of Jerusalem for 400 years.  However, knights and even regular people listened when the Pope spoke, and off they went. Europe in the latter part of the 11th century was a very spiritual place.  Christianity was much more prevalent than today, and spirituality governed nearly everything in peoples’ lives. Christians were obsessed with sinfulness, contamination and the impending afterlife, and if the Pope suggested that each man in an army could gain salvation by marching 2000 miles, and in the bargain likely get killed, they were all for it.

Once Urban II began the cry for Christians to march to save Jerusalem for Christianity, preachers and other holy men, large and small, crooked and honorable, picked up the message. One of the first groups, made up of some 15,000 “poor rabble,” mostly Germans, was particularly half-cocked . These, later called “The People’s Crusade” didn’t coordinate with anyone. As they marched , still in the Rhineland, they carried out a terrible massacre of Rhineland Jews. But, heading into Asia Minor, as soon as they entered territory defended by the Turks, they were mostly annihilated.

The main force of 60,000 to 100,000, and 7000 to 10,000 knights along with women and children, left their homes in France and Germany and Italy and marched to Constantinople, led by Count Raymond of Toulouse, Behemond of Taranto, Godfrey of Bouillon, Baldwin of Boulogne and Tancred of Hauteville. In Constantinople, the seat of the Eastern Holy Roman Empire, they hoped to pick up support from the Greek Orthodox Christians under Emperor Alexis I Comnenus.

Alexis showered the Latin princes with gifts when they came to his court, but he extracted from each a pledge that whatever cities, forts or countries they might subdue would be handed over to an officer appointed by the Emperor.  He then whisked them across the Bosporus and on to Asia Minor.

The Latin crusaders continued their march across what today is southeastern Turkey. At Nicaea they laid siege to the city. The same Turkish Seljuk force that had wiped out the People’s Crusade were out tricked by the Latins, who had gotten help from a Turkish spy. Also, Emperor Alexius kept his distance, but sent a fleet of Greek ships which were portaged 20 miles to a lake before the city. Using these ships to penetrate the city defenses, the Latins were able to overcome the defending Turks and win the city.

On they went, heading south toward the Levant, into Syria, until they arrived outside of Antioch. The walled city stood between them and the Holy Land. The Latins expected Alexius’ Byzantines would assist them in taking the city, but this didn’t happen. They laid siege to the city, employing all the medieval weapons: wooden towers and ladders that could be pushed up to allow attackers to scale the walls, huge catapults (mangonels) to launch boulders into the city, fiery bundles of pitch and reeds, and battering rams. Of course, the defenders rained down thousand of arrows, and through burning pitch, red-hot stones, etc. on the attackers.

Both sides used terror to discourage their opponents—beheading captives and flinging their heads back among their forces, desecrating graves, and all manner of atrocities. Although this was a “Holy Pilgrimage” both sides never avoided the cruelest terror techniques.

The Latins had now occupied the Syrian ports of Latakia and St. Simeon and were able to receive ships bringing supplies and food to the troops. One group of English ships brought important building materials, crucial to creating the tools to defeat the defenses of the city.

The Latin Christians exploited the split between Sunni and Shiite Muslims, and used treachery and sheer willpower, but the stroke from God that many believe led to victory was the discovery of a fragment of the lance that Roman soldiers used to pierce Christ’s side while he was nailed to the Cross. Whether authentic or not, this was a tremendous boost to the morale  of the Latins. Soon they were able to finally arrange a surrender and capture Antioch.

From there, the Latin Crusaders marched toward their objective of Jerusalem, and laid siege to the Holy City. By now, there were about 15,000 battle-hardened warriors, including some 1300 knights. In racing from Antioch to Jerusalem the Latins had failed to build a strong line of supply and they were now racing to take the city before an Egyptian army could arrive.

Luck again came from the sea, as a small fleet of Genoese ships anchored at nearby Jaffa. These ships brought ropes, hammers, mattocks, nails, hatchets. The Latins had also arranged for Local Christians to cut down timber from nearby forests and use camels to ferry it to the troops outside Jerusalem.
The final assault on Jerusalem began at dawn on July 14, 1099. One siege tower had been constructed so that it could be quickly relocated, so that the defenders awoke on that morning to find that the tower had moved half a mile, from a well-defended place to a poorly defended place. Soon after midday on July 15 the Latins had conquered Jerusalem and there was widespread killing and indiscriminate slaughter. One crusader described it: “Piles of heads, hands and feet lay in the houses and streets, and men and knights were running to and fro over corpses.”

Now that Jerusalem, Edessa and Antioch and other parts of the Levant were in Latin hands, they became “Outremer”, or overseas, the first instance of Europe extend its reach. During this period, from 1099 to the beginning of the Second Crusade in 1147 the Knighthood orders of Templars and Hospitallers were created and were central to events in all the remaining crusades.

In the early twelfth century several marches like crusades took place, with knights and marching to attack Muslims, sometimes Jews, here and there; papal power was challenged, and many were killed in various encounters.  However history established that the Pope Eugenius III launched the second crusade in 1147. The miraculous success of the first crusade drove this one, but internal conflict doomed it to failure.

In 1188 Muslim troops succeeded in capturing Jerusalem, which had been in Christian hands since 1099.

The crusades kept happening—too numerous were all the forays recorded. However, history counts nine Crusades, the last ending in 1272. Nineteen years later, in 1291 English-led crusaders were defeated at Acre, which represented the end for Latin power in the Levant. The Muslims regained control of Palestine.


Posted by The Personal Navigator at 5:18 PM