The American Family from Plimoth to Today 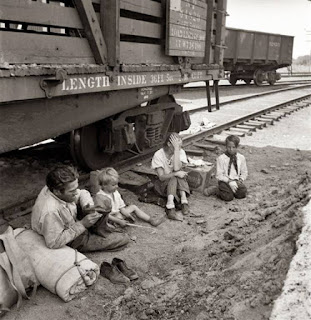 American family during the Depression 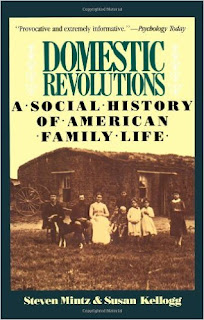 I feel whiplashed by this book, and by the history of American families.
The idea of the family in the time of the first European settlers was so strong, and you don’t have to be a social scientist or historian to know that today, more families are run by a single mother, more marriages will end in divorce, more teenage girls will have children outside of wedlock, and more children will grow up in a continuous cycle of poverty, drugs, abuse, lack of parental guidance, poor schooling, and the prospect of repeating it all over again for another generation.
This book was published in 1988, so it would be interesting to read the 2015 version of this history.  But nothing I have learned or read suggests that we have found the path toward improvement.  The authors do propose remedies, though, and we’ll look at those later.

Steven Mintz, a historian, joined forces with Susan Kellogg, an anthropologist, to conduct this fascinating story of the American family.
They use letters, diaries and documents generated at the time to look at what is an American family, and all the “Domestic Revolutions” that have taken place since white men and women arrived on this continent and set up housekeeping.
The authors examine Native Americans as well, and give us an interesting look at life in the families of African slaves.
When the Pilgrims arrived at Plymouth, Massachusetts the family was the most important institution to helping them adapt to life on this wild continent.
The family was a lot more than we think of today.  It was the work place for its members, the school, and the place of worship. It was the hospital, the bank, and more.
Love was not necessarily involved in marriage.  Husbands and wives were often matched by the older generation, and there was always a financial consideration, which became more elaborate as more Americans obtained land and generated wealth. 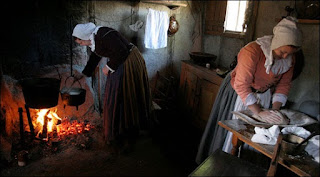 In Puritan days, the idea of death was everywhere.  Many women died in childbirth, and it was the rare child who reached the age of 20. Add to that the Puritan concept of original sin, whereby even newborn children were considered sinful.  Children were taught to be ready for death. Early schooling combined with religious teaching, to develop another God-fearing generation.
Puritans never thought of the family as a private unit. It was an integral part of the larger political and social world. It was a world of one man, one woman and many children.  Orphan children, children of the poor, convicts and single men and women were compelled by selectmen to live within “well-governed families” so that “disorders may be prevented.”
In spite of Puritan ethics and morality, life went on in the colonies, and not all of it was pretty. The authors write of men tried for abusing their wives, a man in Maine beat his wife with a club when she refused to feed a pig. An Ipswich man poured poison in his wife’s broth in an attempt to kill her.
Mintz frequently quoted the diaries of Samuel Sewell, a businessman in the late 17th century in Massachusetts.  Writing about the time when his daughter gave birth in 1701, 16 women were in attendance in the lying-in room to offer encouragement and give advice.
If a Puritan father were to be transported into a modern American family, he would be apoplectic at the independence and ignorance of children today.
Children, both boy and girls, wore a sort of dress until age seven, when boys put on trousers and girls dresses.  Boys went to work, as apprentices in the father’s trade, or nearby in another home.  Girls began to learn of the role of women in spinning, cooking, finding wood, growing a garden, sewing, and cleaning.
Gradually, things loosened up in the family.  Fathers began to lose or give up some absolute authority.  The idea of “original sin” of newborns changed so that the concept of death was matched with a more pleasant afterlife, when earthly burdens would be shed.
And children were no longer required to remain standing while their parents ate their meals.
Fewer couples addressed each other as “Madam” and “Sir”, as emotion began to creep in to the family.
In the 17th century there were from 850,000 to two million Native Americans in what we now call the United States, and they were in 240 different tribal and ethnic groups.  Families were small, infant mortality was high, mothers nursed their children for two years. As time went on, many Indians died of diseases of white men, and many Indian women married white men and African slaves, as families began to get more diverse.
Mintz’ 1988 book provides an interesting discussion of life in African-American slave homes.  With all the terrible treatment of slaves, and with families torn apart by slave owners, children sold off, wives sold to another owner, sexual abuse by white owners—the most horrible of treatment and miserable living conditions--- despite all this, the man, the father, was a stronger part of the family unit.  Where they could, men and women stayed married (or committed to each other where marriage was not permitted) in far more cases than today.
Chesapeake planters learned early on that they needed to grow the next generation of slaves, so more African women were brought over, and stable family life was encouraged.  Most unions of men and women lasted over 20 years, except when one mate was sold to another plantation, and according to the authors, slaves valued marital stability. Slaves in most cases discouraged casual sex in their communities.
By the start of the 18th century, more white families began to pull into a higher income category.
The Industrial Revolution brought a lot of changes to the American family.  As factories opened, many people, left the farms and came to work in factories.  Women, especially, left home to work in the mills.  Soon, there was a need for more workers than could be provided by natives, and immigration began to increase.  Poor Europeans, seeking the promise of wealth in the New World, flocked here, and of course that brought changes to the American family. 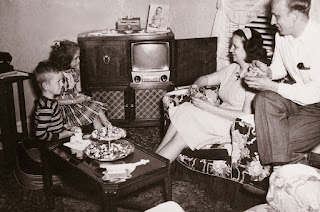 The Fifties, 1950-59, usually comes in for recognition as the time of the ideal family.  There was far more stability than today, more discipline.  Parents, who grew up in the Depression, had lower income expectations. They had lived through World War II and experienced sacrifice.  And few people were involved with drugs.
Then came the Sixties, and all hell broke loose.  Intellectual leaders pointed out the plight of American women, mostly dedicated to a life as mother and homemaker, supporting partner in the family, and began the drive for feminism and women’s liberation.
Abortion, once considered taboo, became increasingly mainstream.  At about the same time, birth control pills for women became widely used. 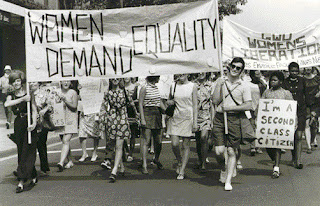 Women’s Liberation March, 1960s
Young people were stirring, restless, ready to shake loose the conformity of the Fifties, and an age of revolution began. War began slowly in a far-off country called Viet Nam, but in this decade it grew, and gathered up young American men to go off to fight.  Unlike World War II, this brought on a fierce public opposition, and many young people openly resisted the draft.
At the same time Black leaders were gaining increasing traction in striving for racial equality, and this brought on demonstrations and riots and murders, racial unrest that continues even today.  But changes took place.
Against this backdrop the American family changed profoundly in this decade.  More women left home to work, leaving children in the care of child-care facilities, relatives or babysitters.  There were more divorces.  More and more people got introduced to drugs.
Discussing families gets very quickly into which politics people use.  The African-American family today seems to many observers to be a structure in crisis.  Too few children are born and grow up in homes with no father, and perhaps a mother who has experienced very negative relations with males and tends to take her feelings out on her sons.

Black Poverty, 1994
Education in poor, black neighborhoods is not as good as in middle class neighborhoods, and even if it were spectacular, the child’s education should take place 24 hours a day, at school and in the home.
Children who receive a poor education, or are poorly motivated, and eventually drop out, become more of the huge swirling pool of unemployed, uneducated, unmotivated people who are easily captured by gangs, crime, and drugs. And what does society do?  It locks them up, where they can continue to polish destructive behaviors in prison.
Conservatives conclude that the black family is really kept down by massive welfare programs that encourage poor work habits, and discourage cohabitation and parental support.
Liberals contend that there is too much incarceration, and many imprisoned blacks should be released to work programs.  They cry for improving schools in black neighborhoods, but good schools without parental support is like one hand clapping.
What’s the solution?
The authors offer some.
Enact legislation that encourages husbands to stay in the family. Provide support for families, instead of withdrawing welfare when the husband comes home.
Work out flexible hours and maternity/paternity leave policy to allow workers to be more effective parents.
Improve custody laws and other aspects of divorce law to provide best possible contacts between parents and children.
Steps are now being taken to decriminalize non-violent drug users, with addicts placed into recovery where before they were jailed. Will this work? 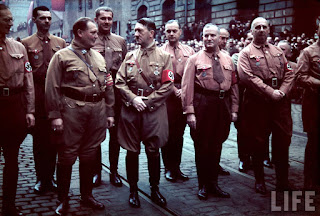 Posted by The Personal Navigator at 11:18 AM