End of an era in Rockport’s Millbrook Meadow 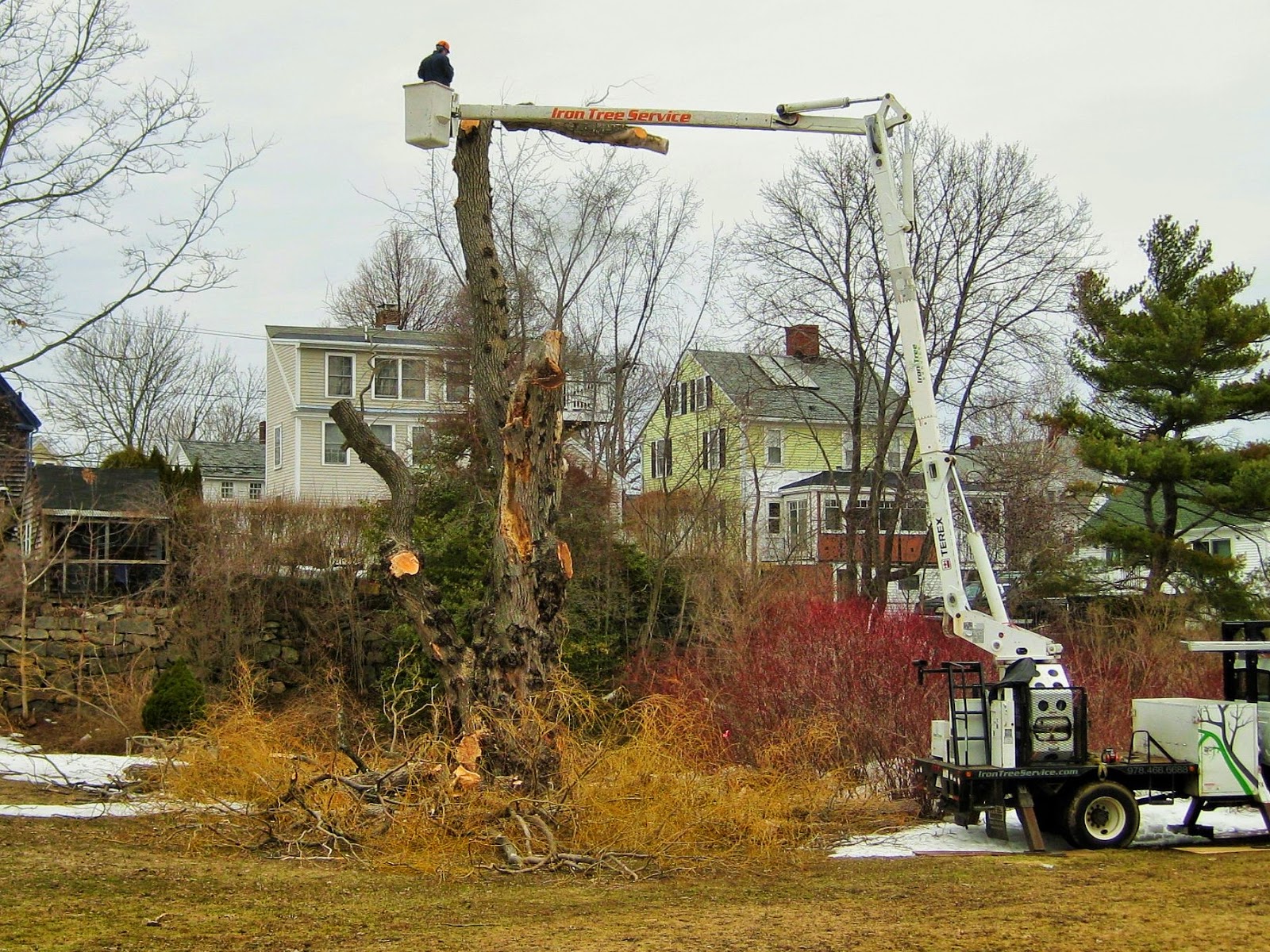 Over a century of history came crashing down in Rockport’s Millbrook Meadow Thursday (April 2) when arborists cut down two fine old willow trees.  The trees had become dangerous—long past their expected life, the large upper boughs were prone to fall off at any time.   Arborists estimate that the large willow in the center of the Meadow was planted about 1912, when William Howard Taft was President of the United States.

Removal of the two large willows is part of the program for restoring the Meadow planned by Rockport’s Millbrook Meadow Committee.  Restoration is set to begin in 2016.
For two years, a group of people in Rockport have been on a campaign to save what they call “Rockport’s Green Jewel”.
Millbrook Meadow and Mill Pond, a beautiful four-acre spot right in the middle of Town, is badly in need of restoration.
When the Town finally got a new dam to replace the one that blew out in a violent rain storm 1n 2006, a few people started to see the clues.  The beautiful Meadow and Pond were slowly slipping away.
The Pond had become filled with sediment over the years and now it was so shallow that cattails were starting to fill it, and fish could no longer live in the shallow water.
The willows were losing huge boughs, and had reached the end of their lives. And the Mill Brook was often flooding its banks and turning the Meadow into a muddy, sloshy mess.
Millbrook Meadow Committee began a campaign to restore this precious parkland.  With money from Lura Hall Phillips, a fund left in trust specifically for the Meadow, they began.  Town Meeting voted more money, and then the people of Rockport voted an additional amount from Community Preservation funds.
Working with the Department of Public Works, they hired a contractor, and began the long process to restore the Meadow and Pond.
Now, the contractor’s engineers and scientists have poked and prodded, tested and sampled, to find out just what was needed to bring the park back to vibrant life.  They have prepared a Master Plan which describes the many tasks that will restore the park, and now they are at work on the actual design to do the work.
The actual restoration of the Meadow and Pond is planned to begin next year, if the Town can raise the money for the work.
Millbrook Meadow Conservancy, a sister organization formed to look after the Meadow and to raise funds, began a fund drive last fall, and so far have raised over $28,000.
Now a local donor who prefers to remain anonymous has offered a dollar-for-dollar challenge match of up to $25,000 for all new donations received between March 1 and September 14, when Rockport Town Meeting will vote on appropriating vitally-needed Community Preservation funds for the Meadow project.
If donors respond generously to the challenge, the Conservancy will raise an additional $50,000 toward the total project cost, which is now estimated to be just under $1,300,000.
Rockporters will have a chance to see what is next for Millbrook Meadow at a public meeting Wednesday, April 15 at the Rockport Public Library’s Brenner Friends’ Room, from 7 to 9 p.m. Millbrook Meadow Committee will unveil the Master Plan for the Restoration of the Pond and Meadow.
This restoration will include dredging the Pond.  It will call for rebuilding the Mill Brook, making it wider, and making it bend, so that it won’t flood so often, and will be friendlier to eels, fish, frogs, turtles and aquatic plants.
It will improve the drainage in the Meadow. It will remove the alien invasive plants and plant new, native species. In order for people to explore the forested parts of the Pond, and look at the wildlife in the wetlands, there’ll be a path on both sides, and a wooden walkway between them.
There’ll be a new play area for children, and the Frog Pond will be dredged and rebuilt.
There will be new plantings around the Frog Pond that make it into a quiet place to enjoy nature.
It will plant new trees, including replacement for the fine old willows. A gently sinuous path along the side of the Meadow will be built, with low-level lighting and water for watering gardens.
For more information about the plans for the Meadow and Pond, visit
www.millbrookmeadow.org  or contact any member of the Conservancy or Millbrook Meadow Committee.
-end- 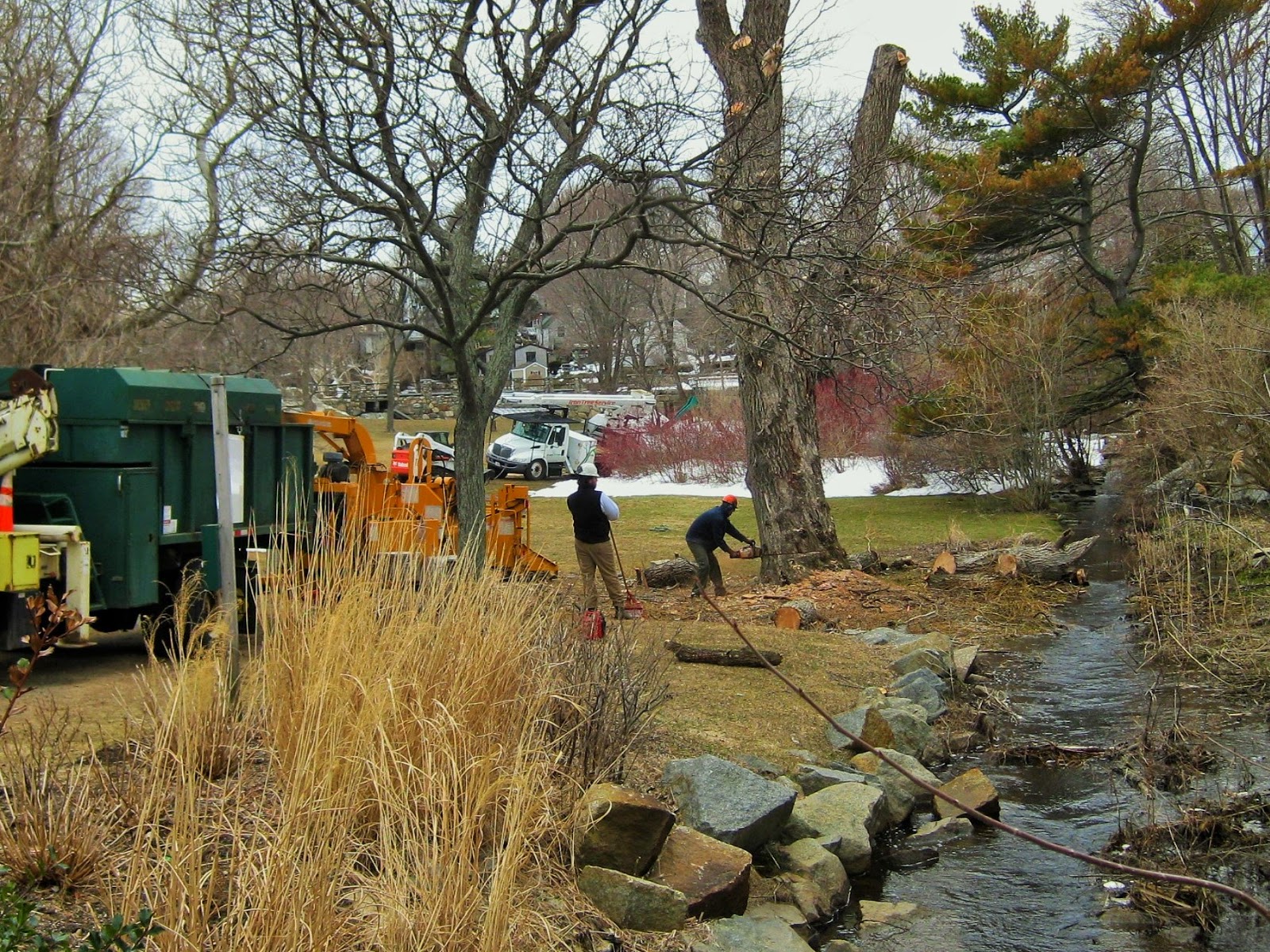 Worker makes the final cut to take down old willow by banks of Mill Brook in Rockport. In distance, another tree cutting truck has been removing the large old willow in the center of the Meadow.  Photos by Millbrook Meadow Committee.