Master Plan for the Meadow and Pond

The Master Plan for
Restoring Millbrook Meadow
and Pond 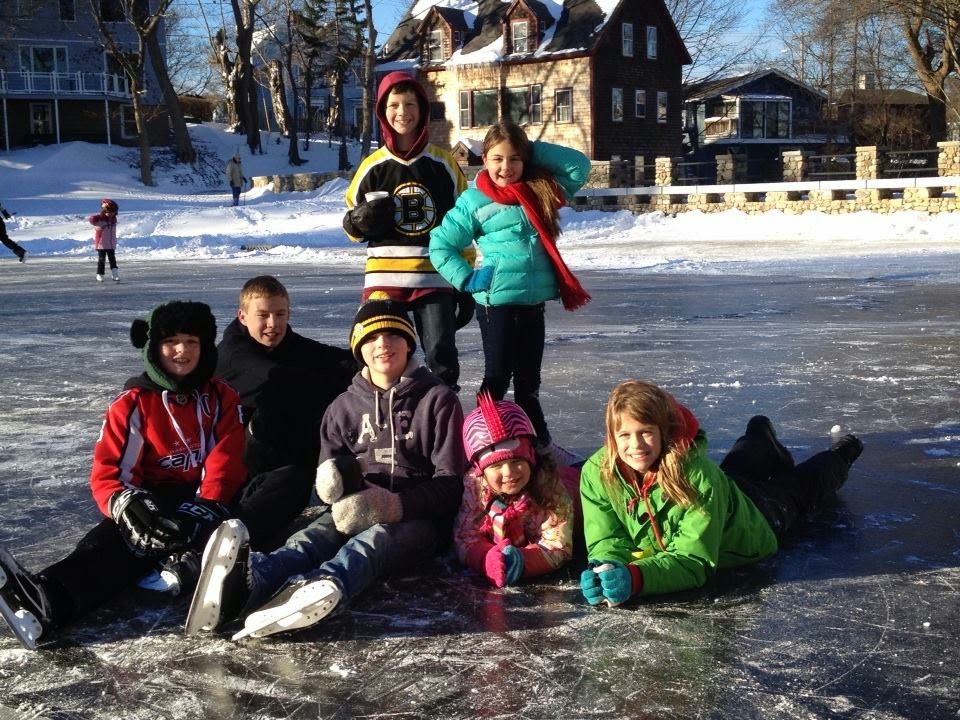 Rockport’s Mill Pond is still popular! (Photo by Becca Morris Campbell)
Millbrook Meadow Committee, since 2012, has been devoted to a massive project for the Town—the restoration of the four-acre parcel in downtown Rockport, adjacent to King and Beach Streets and Mill Lane. 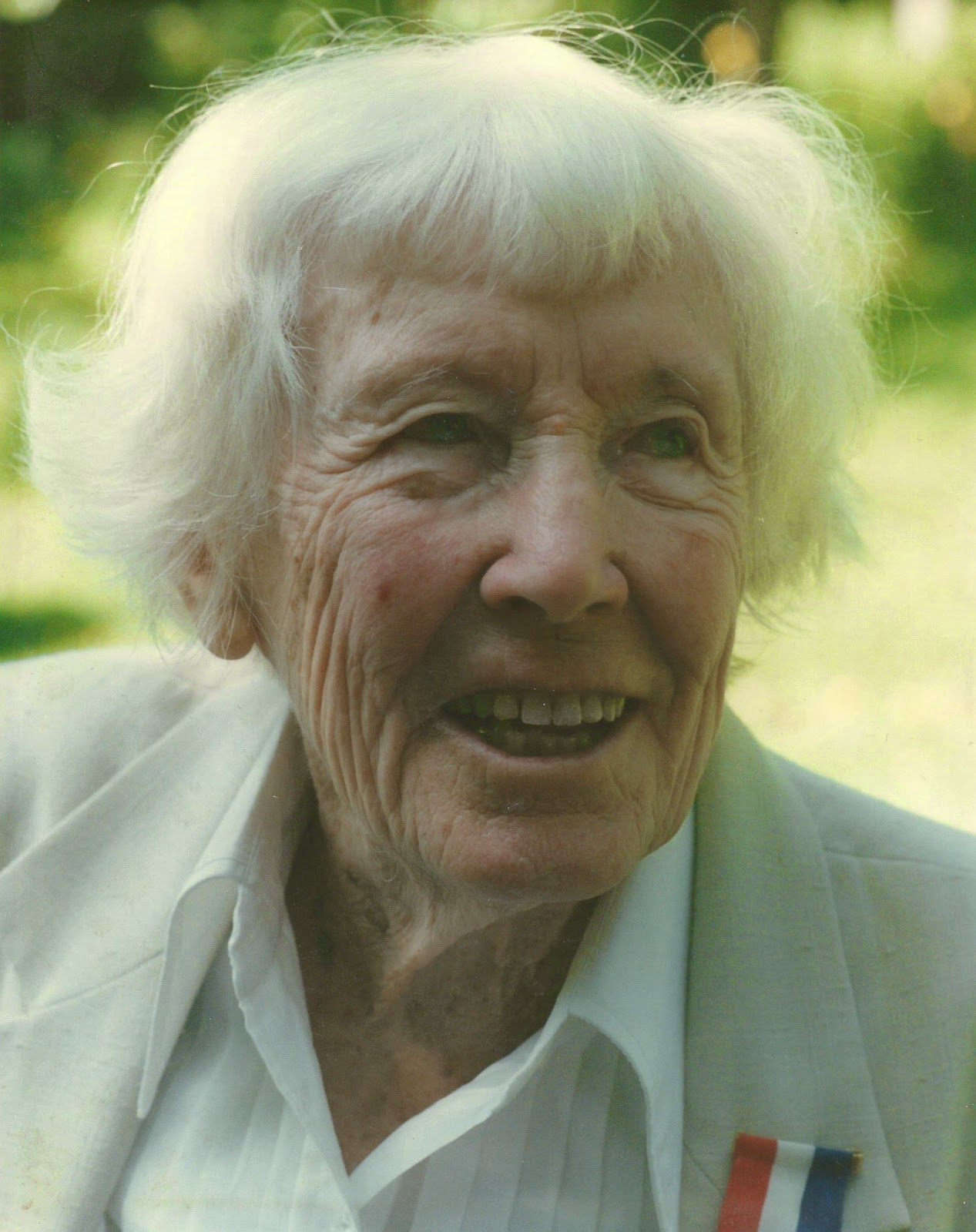 In 1951 Lura Hall Phillips began efforts to save the Meadow from becoming a town parking lot, and over the next 40 years worked to protect and preserve this beautiful parkland.  When she died in 1994 she left money in trust for the Meadow.
Over many decades Rockporters have enjoyed the Meadow for festivals, fairs, picnics, weddings, games and just fun.  For over a century Rockporters have skated on the Mill Pond, and it was once a good place to catch small fish.
The dam between the Pond and Meadow, originally built in 1702, blew out in 2006, and was finally replaced in 2012, and it was then that the Committee, led by John Sparks, began a very comprehensive project to restore the area.
Construction of the new dam dramatized the poor condition of the Pond and the Meadow. The Pond was filled with silt, its original eight-foot depth now reduced to four feet or less and badly clogged with aquatic plants.
The Meadow was often soggy, the Brook was clogged with loose stones and debris, and several large trees were dead or dying.
Barbara and John Sparks led the Committee’s drive to obtain funding from Town Meeting and from the Community Preservation fund. The Committee obtained $162,000 from the Lura Hall Phillips Trust, and went to Town Meeting and townspeople voted $60,000 in regular Town funds and $100,000 in Community Preservation Funds (total of $322,000) to begin the restoration. We plan to request additional funds at Fall Town Meeting in 2015.
The year 2014 began with a contractor hired to begin the long-awaited restoration. Milone & MacBroom began with a complete program of soil testing, sampling of the Pond bottom, and a complete study of the four-acre parcel.
Membership:  Members of Millbrook Meadow are Charmaine Blanchard, Shannon Mason, Barbara Sparks, Ted Tarr, Marcia Lombardo, Aileen Morrissey, Stephanie Woolf and Sam Coulbourn. Shannon continued as vice-chair, Sam chair, and Marcia treasurer. 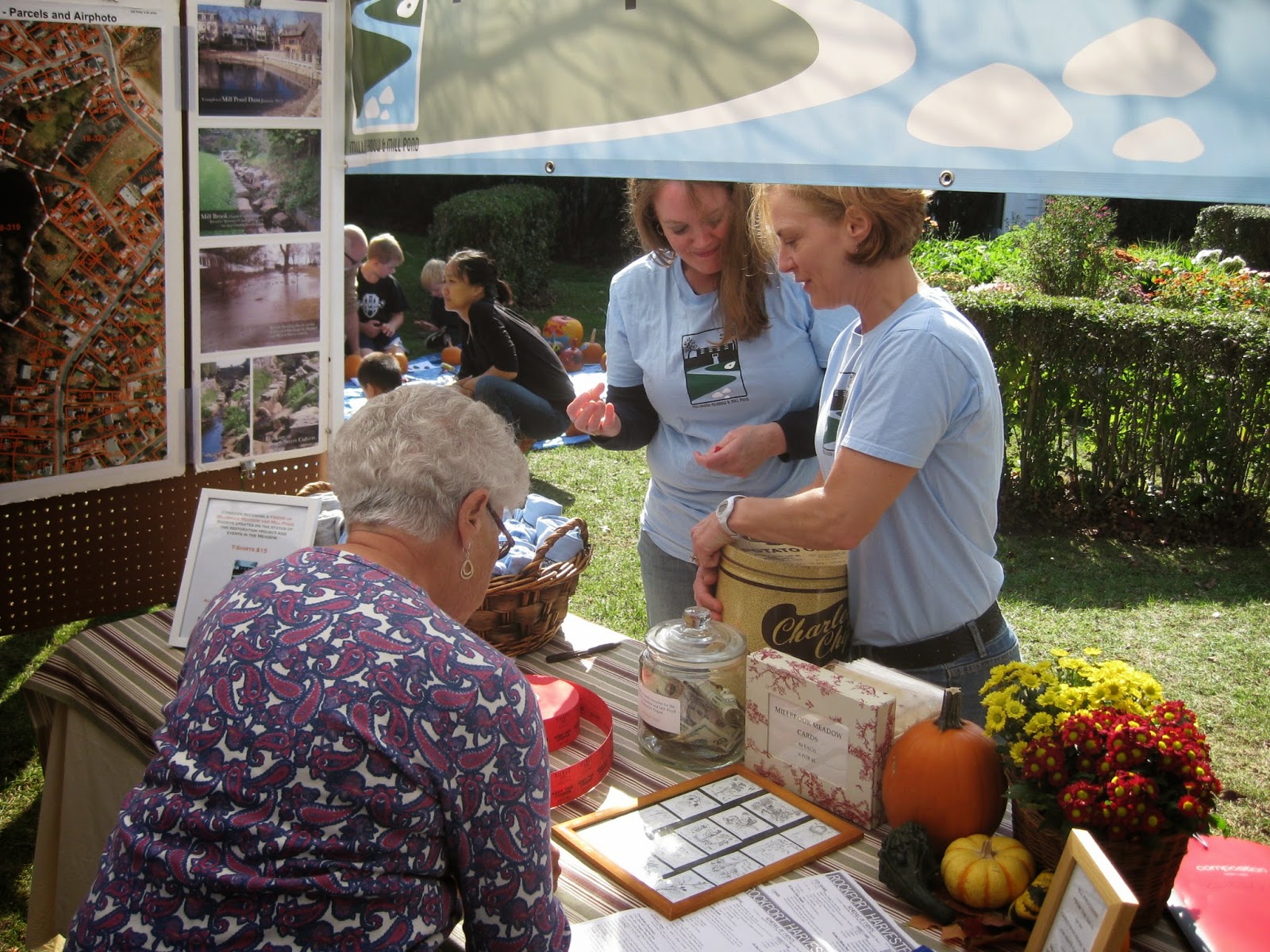 Fund-Raising Committee. In January Shannon Mason organized a Fund Raising subcommittee, with Charmaine Blanchard and Sam Coulbourn as members and with Susan Gray and Betsy Giannoccaro as advisors.  The subcommittee initiated an application for membership in Essex County Community Foundation (ECCF) in order to create a structure for providing a tax-exempt organization, qualified to accept tax deductible contributions.  We have raised $23,000 in private donations to date.
Conservancy Formed. Since Millbrook Meadow Committee, as a town government entity, could not serve as fund raiser, the Committee began creating a board for the Rockport Millbrook Meadow Conservancy.  This Conservancy is an independent organization, qualified to solicit donations to be collected by ECCF.  The Conservancy Board works closely with Millbrook Meadow Committee and provides their individual experience and expertise in the Restoration project, associated fund raising, and stewardship of the park into the future.
Named to the Board were Dianne Anderson, Tim Corrigan, Linda Cote, Chester Clark, Martha Jane Coulbourn, Deborah Cowan, Karl Norwood, Maura Wadlinger, Barbara Sparks, and Sam Coulbourn. Because of pressing duties, Linda resigned at the end of the year.
Web Site: Also in January with help of Laurie Ann Condon LePine, the Conservancy initiated a website at www.millbrookmeadow.org

Fighting Knotweed.  During the year the Rockport Garden Club, aided by Millbrook Meadow Committee, conducted several cutting sessions along the Mill Brook bank and on the shore of the Pond.  The Knotweed team collects the cut stalks and they are gathered up and taken to Franklin Park Zoo, where the giraffes, zebras and gorillas enjoy them.  Control of invasive plant life is a key item that will be carried forth in plans for restoration of the Meadow and Pond. 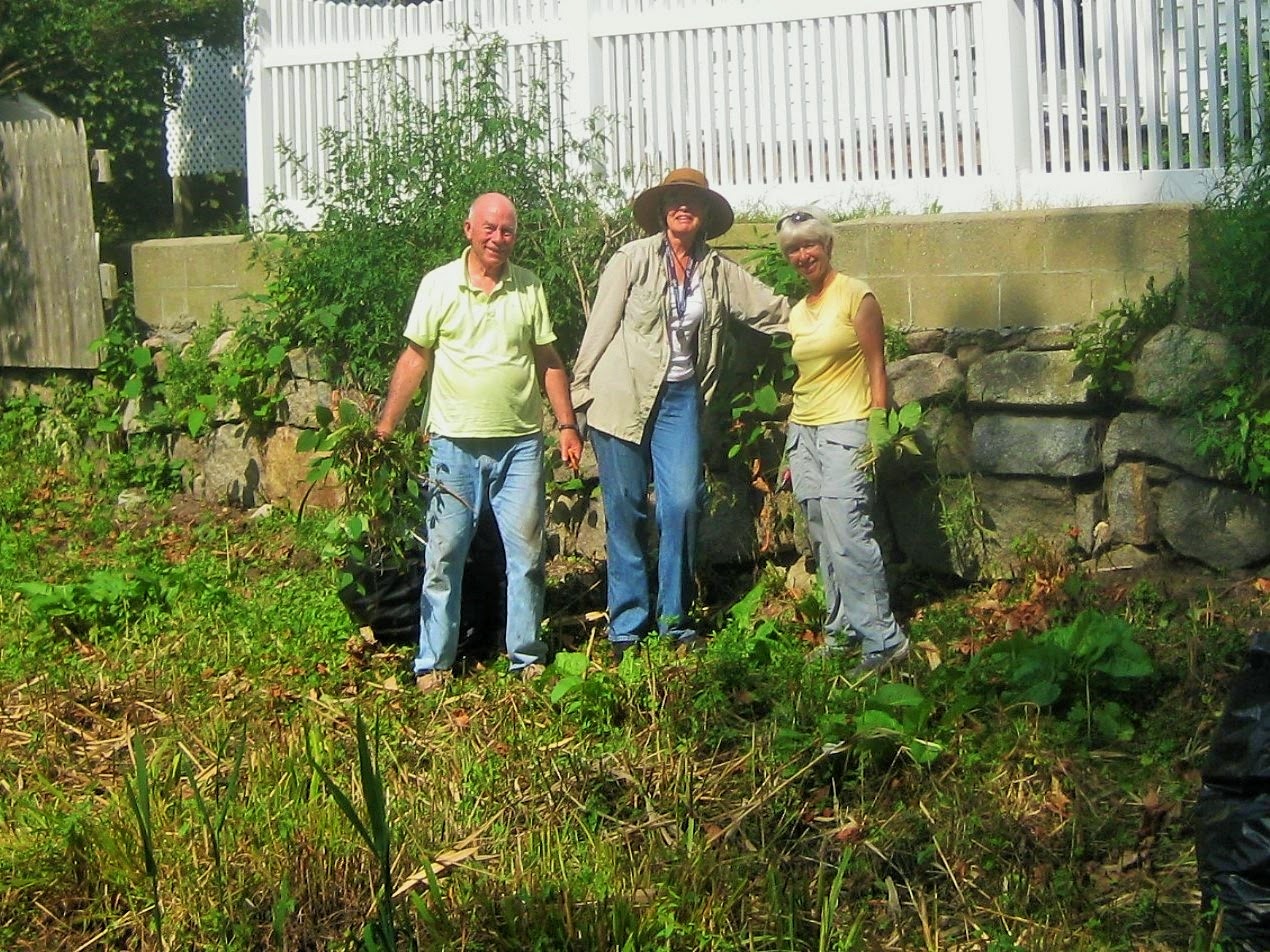 Eagle Scout Trail.  When Sayles Kasten approached the Committee to plan a project for his Eagle Scout badge, John Sparks worked with him to plan a trail around part of Mill Pond.  Sayles worked with boards and committees to obtain permission and in March, led a group of fellow Boy Scouts to cut a path through dense growth which would enable people to enjoy more of the flora and fauna of the Pond. 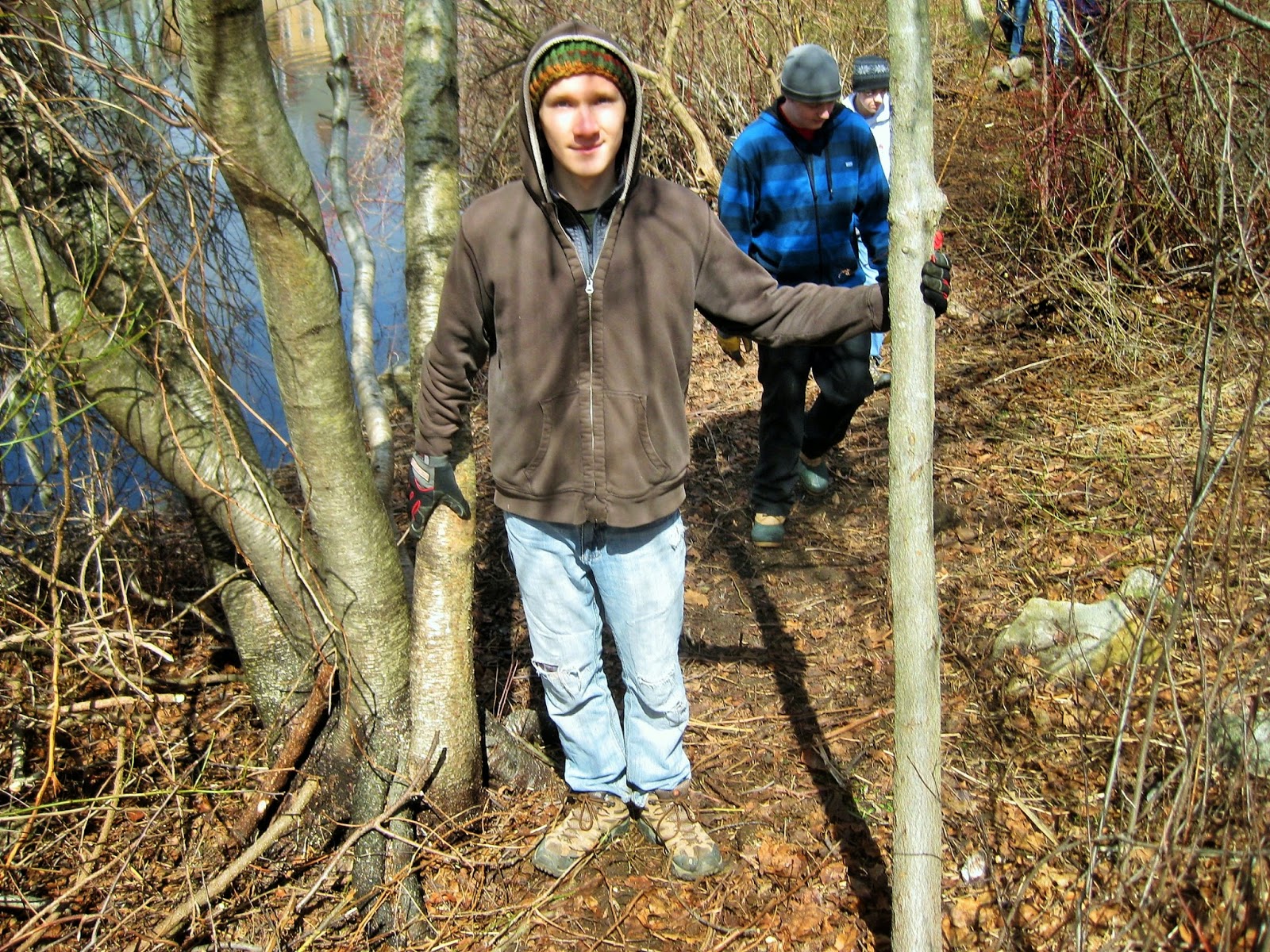 Liaison Group. The Committee formed a special liaison group to work with the Contractor and DPW. John Sparks headed this effort, with Sam Coulbourn and Eric Hutchins, as Environmental Advisor. 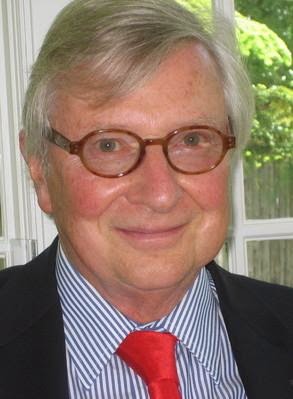 Death of John Sparks. In May, as the contractor prepared to deliver a comprehensive briefing of its findings, John Sparks fell ill of meningitis, and died on May 22, 2014.
After John died, his wife Barbara took over his role as liaison.  She added new advisors:  Gunilla Caulfield, Frank Hassler, John P. Campbell, AIA, and Laura Hallowell. 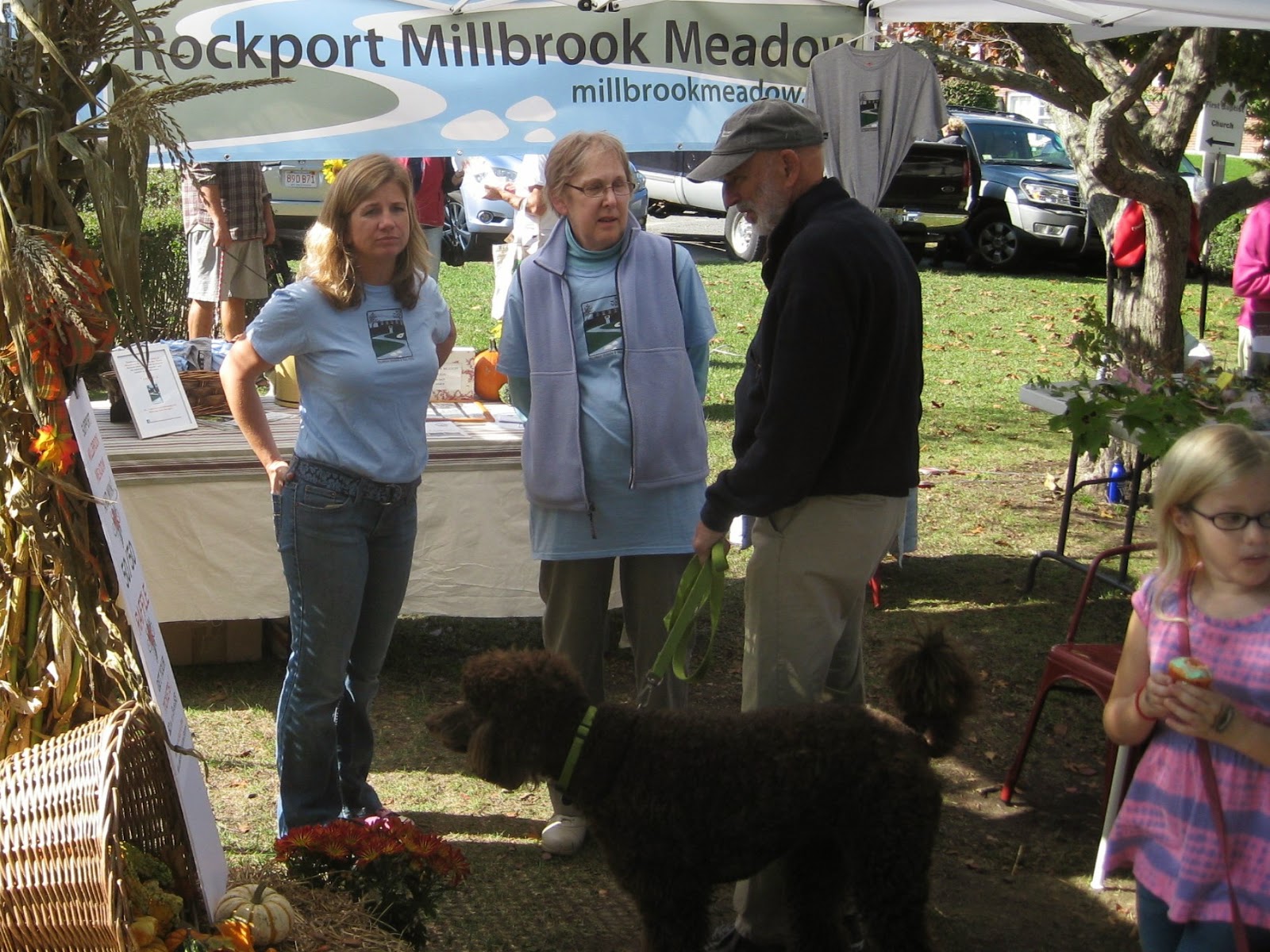 Getting out the Message.  All year Millbrook Meadow Committee and Conservancy members worked hard to get the message about Restoration out to the public. Members manned booths at Motif No. 1 Day, Harvest Fest, the Acoustic Festival and the Garden Club’s two-day Garden Tour. We held numerous public meetings, a visioning session, and provide detailed information on our website, www.millbrookmeadow.org 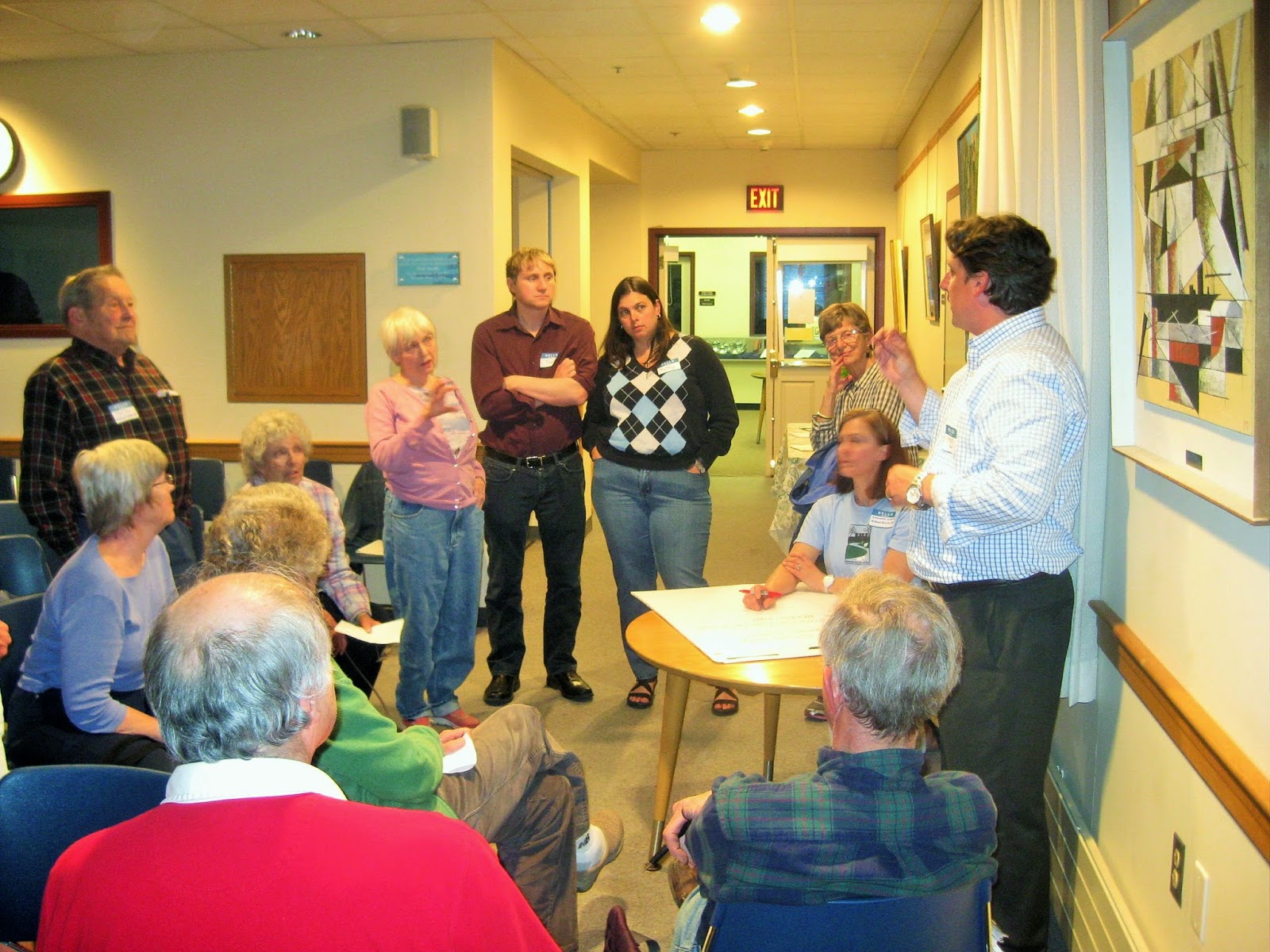 Rockporters hear plans for for Meadow from Jason Williams of MMI

Master Plan.  In December the Committee agreed with the Master Plan proposed by Milone & MacBroom, and now the contractor is hard at work designing the plans for actual construction, to begin in spring 2016.

Restoration Plan. The plan for the Meadow and Pond will include these items:
1.  Dredging of the Mill Pond, removing tons of sediment deposited over many years, and also much of the invasive aquatic plants on the part of the Pond near the dam. The granite stones along the bank will be re-set.
2.  Rebuilding of the watercourse that carries water in Mill Brook to the sea.  It will be widened to reduce the chances of its flooding its banks, and the course will be slightly sinuous, to make it more favorable for fish, eels and aquatic plants. The new design will make the Brook more accessible to children, as well. 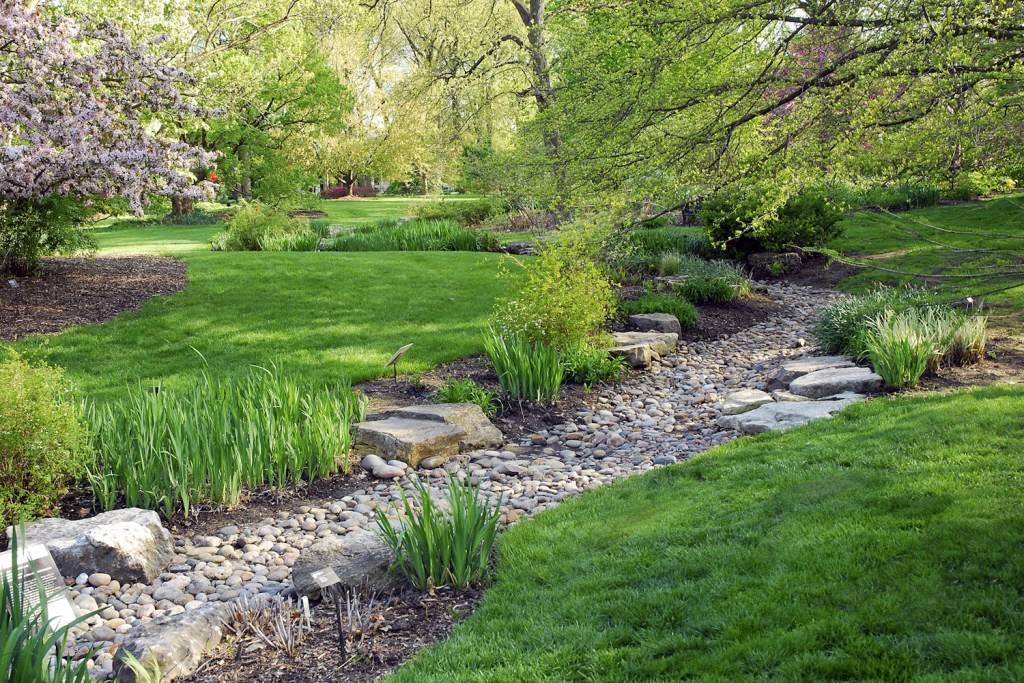 Mill Brook will be widened with more of a sinuous path through Meadow.

3.  Willows. Replacing the old, dying willow trees with new, vibrant willow trees and other species.
4.  The Meadow will be graded and re-shaped, its drainage improved to reduce the chance of flooding.
5.  Rain gardens, designed to absorb water runoff from the adjacent parking lot, will be located along the Meadow path.
6.  The Meadow path will be rebuilt using pervious paving, and low-intensity path lighting will be installed.
7.  Planting throughout the Meadow will be restored, using primarily native species, with special steps taken to eliminate invasive, alien species, like Japanese Knotweed.
8.  The playground will be refurbished with new equipment.
9.  The Frog Pond will be dredged and made more accessible. 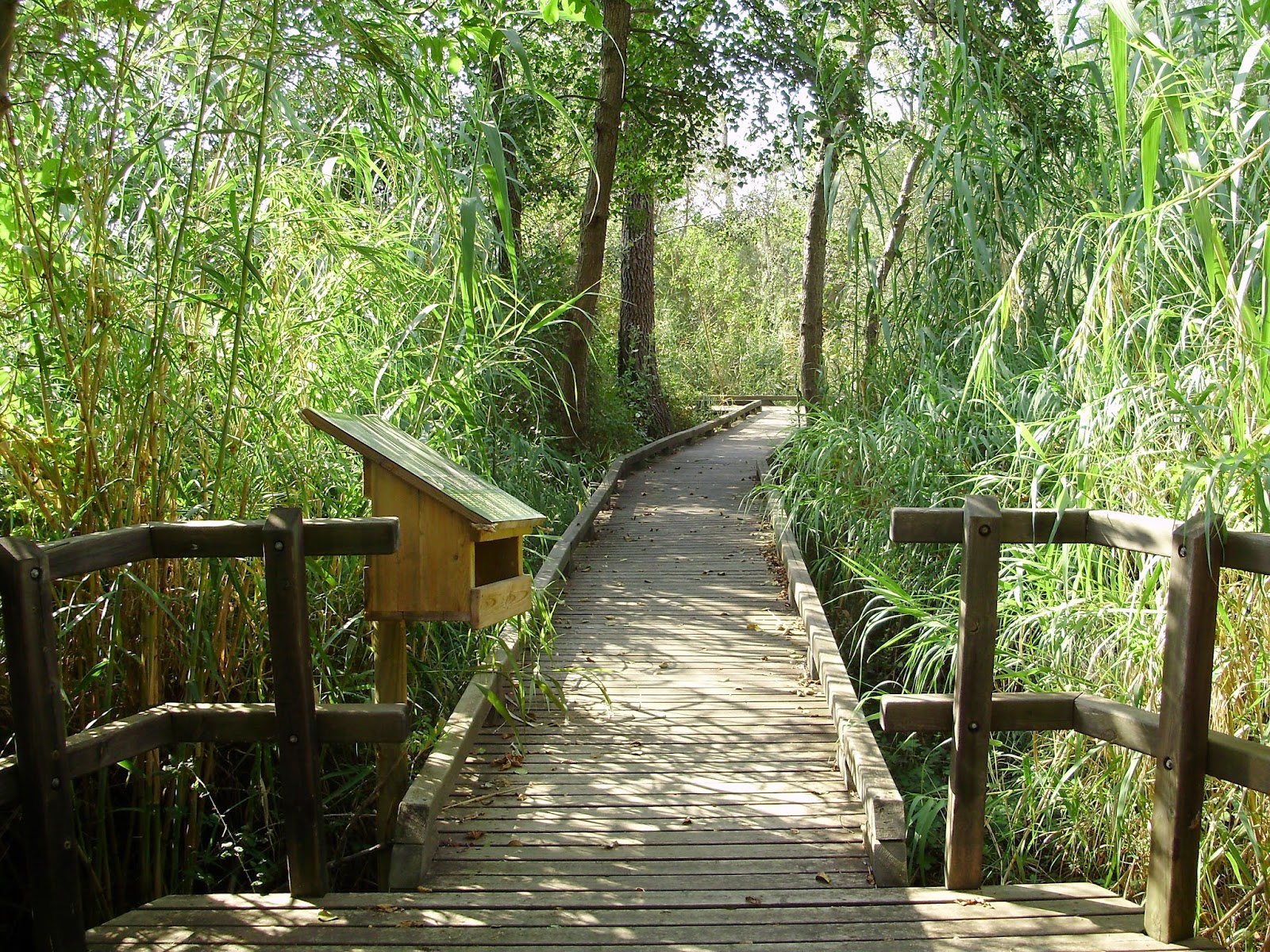 10.  Boardwalk. As the dredging in the Pond is completed footings will be installed for a future boardwalk that will allow people to walk along both sides of the Pond and then cross over in the area between the Union Cemetery and Holbrook Court, where they can view the ducks, frogs, turtles, birds and aquatic plant life.
11.  Water and Electricity. For the first time since the park has existed, a water supply will be provided.  Likewise, electrical receptacles will be provided for use during special events in the Meadow, and for low-level, night-sky friendly overhead lighting.

Plan for 2015. Millbrook Meadow Committee, our Conservancy and Advisors are working closely with the Department of Public Works and Milone & MacBroom toward making the Restoration a reality.  Losing John Sparks was a blow for us, but we have gained some tremendous volunteer talent, and we are resolved to produce a restored Meadow and Pond that Rockporters will treasure for generations to come.
We welcome volunteers who would like to join our Conservancy!

Posted by The Personal Navigator at 8:44 AM