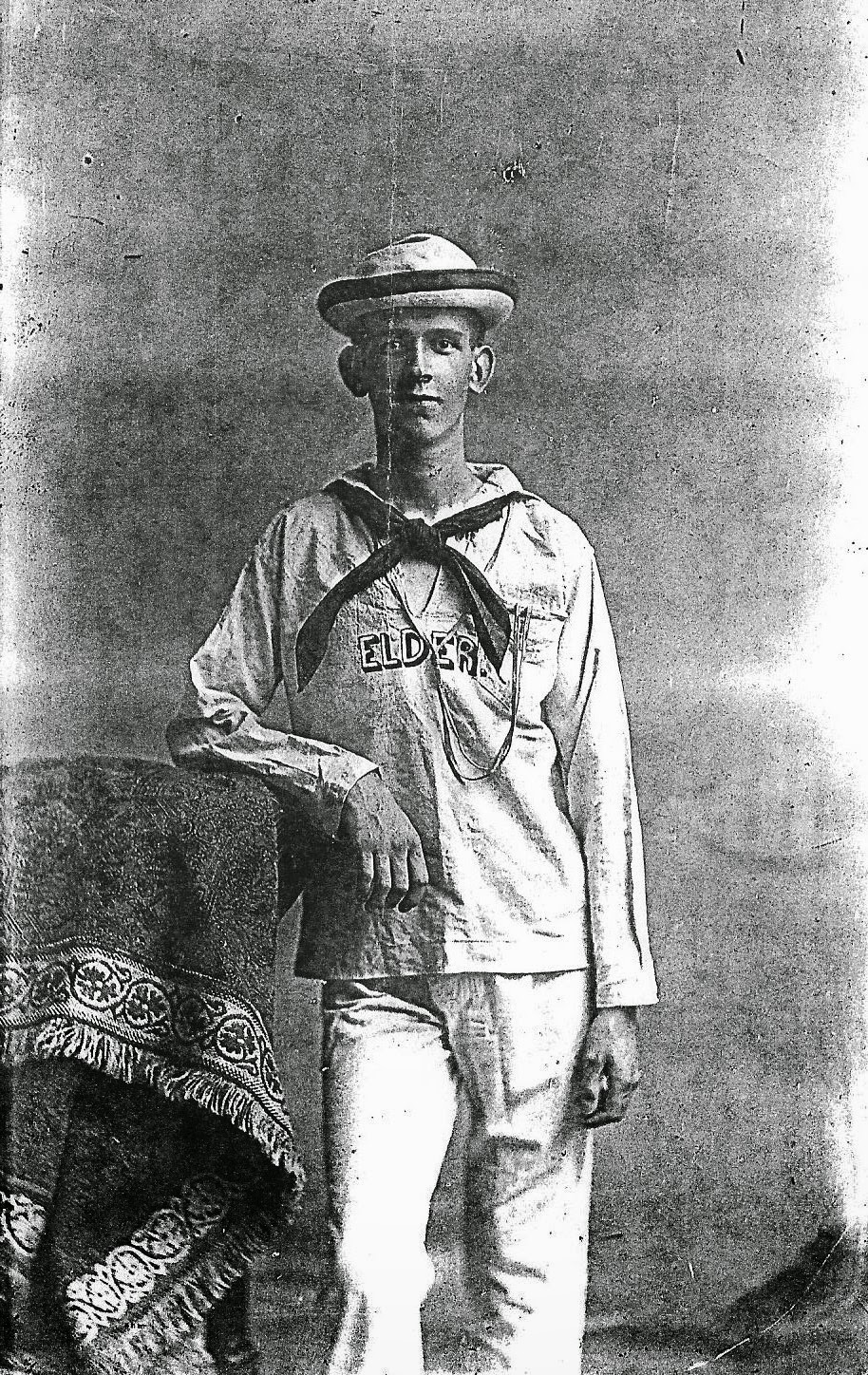 Frederick Sullivan was playing golf at the Bass Rocks golf course in Gloucester, Massachusetts in 1974 when he came across a gold ring in the grass.  It was the 1893 Naval Academy class ring of Edwin Avery Elder of Newton, Massachusetts. 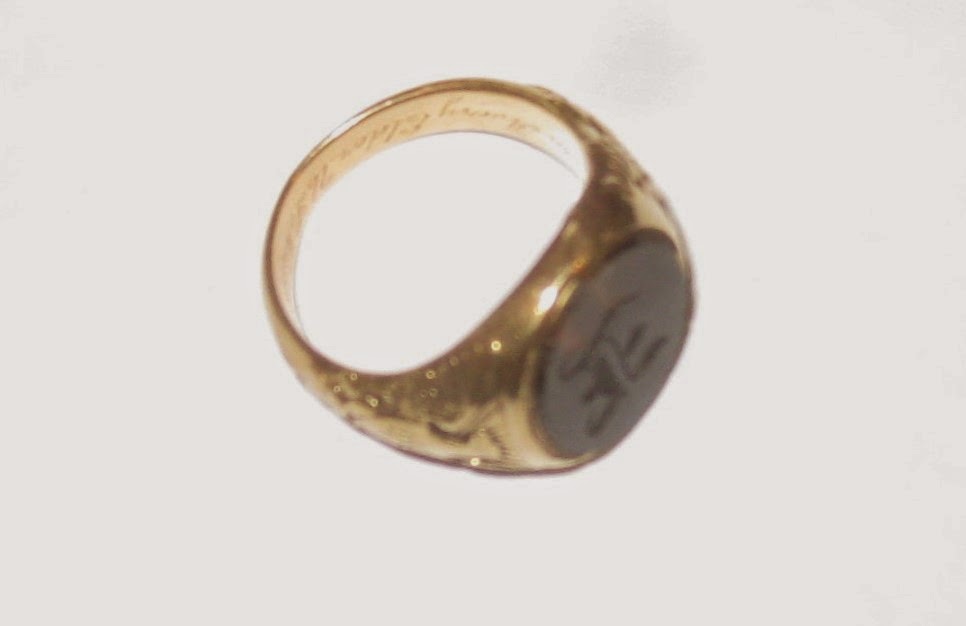 Sullivan showed it to his wife, Drue, and they put it in a safe place.  Sullivan died in 1984, and the ring stayed in the back of his chest of drawers.  Then, one day in 1999 Drue pulled the ring out and began a search to find out about Mr. Elder.  What ever became of him? How did his ring end up in a golf course in Gloucester?
Through friends, she obtained information from the Naval Academy, and found an article in the New York Times which told this story:

Elder was born in Newton, MA, the son of a bank teller. He went through the Newton schools with honor. He was appointed to Annapolis by Congressman John W. Candler of Boston.  He passed the Academy entrance exams with ease, entering in 1889. He completed four years at the Academy, graduating fourth of the 44 men in his class in 1893. 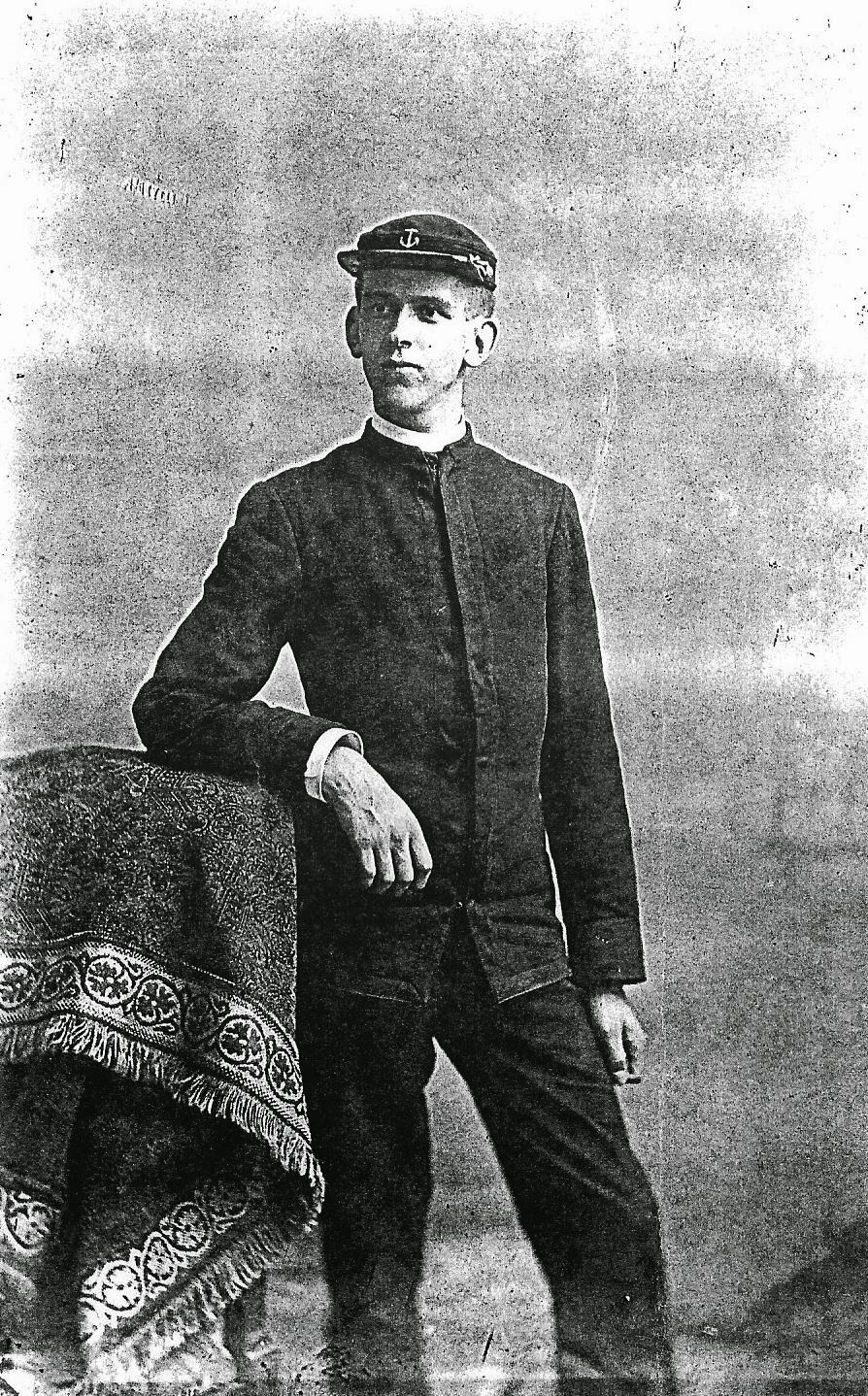 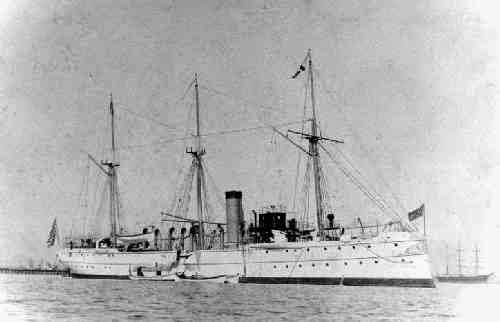 Shortly after graduation he joined USS Bennington (PG-4), a 17,000-ton steam-powered gunboat. The ship was still new when Naval Cadet Elder boarded her, commissioned in 1891. The ship sailed from New York on August 6, 1893. Elder and his shipmates visited many ports and operated all over the Mediterranean Sea until July 18, 1894 when Bennington sailed past the Rock of Gibraltar headed west. They began a long cruise on their way to the Pacific Station.  They visited various ports along the Atlantic coast of South America, then rounded Cape Horn. Bennington then visited Valparaiso, Chile in April, 1895, then on to at Mare Island Navy Yard in San Francisco Bay, arriving on April 30, 1895.

After arrival at the shipyard, Elder was given a physical examination for commissioning in the Navy, and found to have a heart irregularity, which was cause for discharge. He was discharged in June, 1895 and returned home to Boston.  He was apparently quite distressed by not being able to continue in the Navy, but he enrolled in Massachusetts Institute of Technology.

Five Deadly Shots.  A New York Times dispatch datelined Portland, ME on December 4, 1895 reported that Elder had apparently committed suicide in that city.

The Times article related: This young man, neatly dressed, smooth shaven and of good appearance, arrived at Hotel Preble early Sunday, December 1, and registered as “John H. Vose, of New York.” He arrived without baggage.  By Tuesday, since he had made no payment, the proprietor asked the clerk to notify him that his bill needed to be paid. The clerk notified Elder.

When Elder finished his supper, instead of going out through the office he went through the ladies’ parlor and then up to his room.  The door had been locked so he called a chambermaid, who let him in.  A few minutes later a bellboy went to the room with the message that the proprietor wished to see him. Starting to leave the room, Elder said to the bellboy, “I’ve forgotten something – I’ll be down in a moment.”

Ten minutes elapsed and when Elder did not come down, the proprietor went up to the room.  He found the door bolted, and heard groans.  He returned to the office and called the police. Then the hotel clerk went up to the room and climbed on a chair and looked over the transom.  He saw the body of a man, half on the bed and half on the floor.  He climbed through the transom and, once inside, discovered a man with a pistol in his hand, lying there, groaning and bleeding, and breathing heavily.  He had several bullet holes in his head, at the back of his ear.

Elder had planned to deaden the sound of the gun by wrapping bed clothes tightly around his head.  Two domestics sitting in the room next door had heard no sound. The ambulance came and took the man to Maine General Hospital where he soon died.

In Elder’s clothing police found a note, written in pencil:
“Dear Father,
If you ever get this, I suppose it will find you much mystified as to what has become of me, but don’t let it trouble you.  You have done without me for six years, and you’ll get used to it again. Don’t any of you think anything you have said or done has to do with my going.  My mind was made up some time ago. What money I had and the traveling expenses will partly square my account. I appreciate all you have done for me and I am sorry to make so poor a return for it.  I enclose a pawn ticket.
Love to all,
Ned” 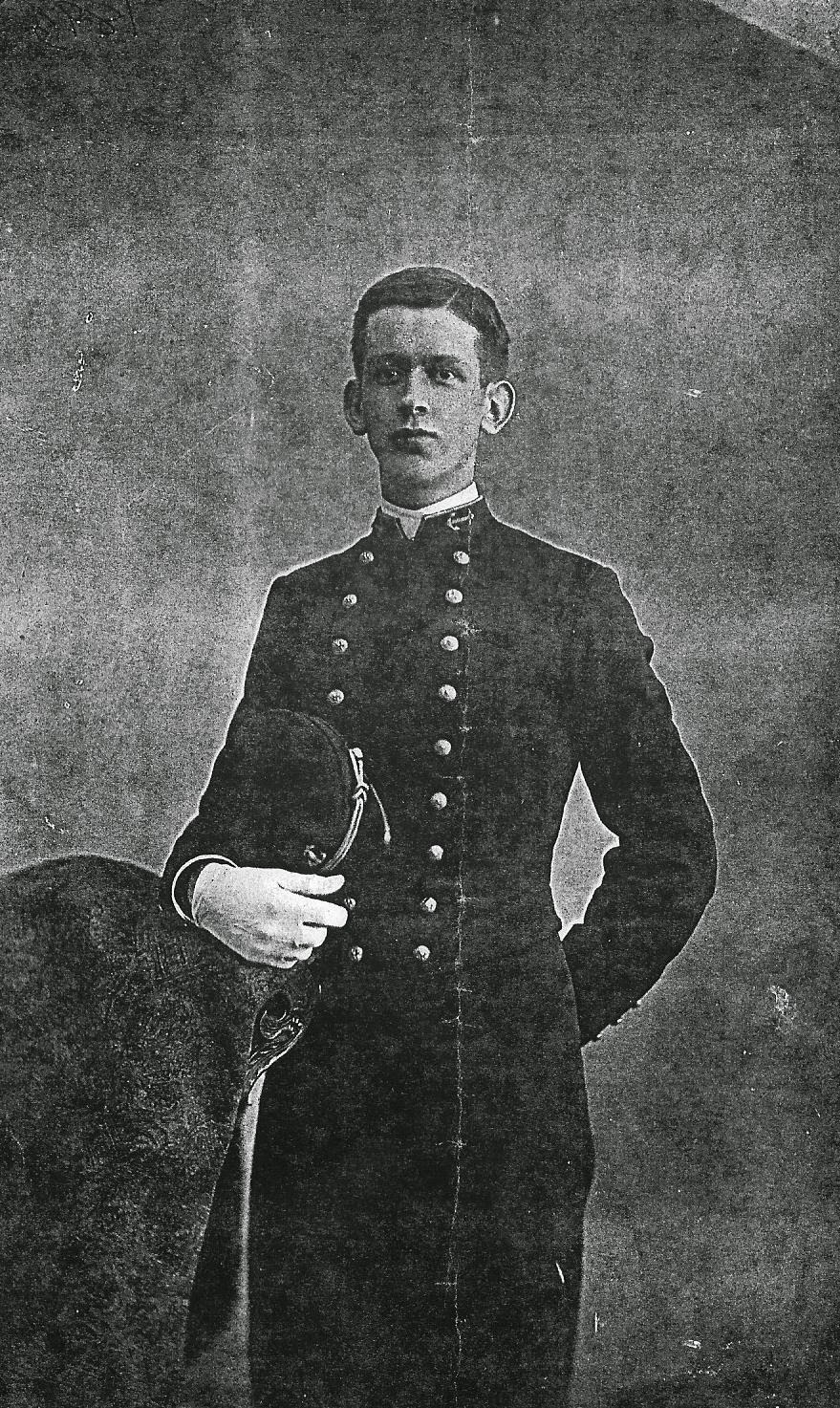 Did the pawn ticket belong to the gold Naval Academy ring?  How did the ring get from the family in Newton to a golf course in Gloucester?

Drue (who is my neighbor in Rockport) brought all the information she had gathered and showed me, since I had also graduated from the Naval Academy, 64 years after Ned.  I could imagine his life at the Academy, because there are so many things at that place that change very slowly.

The white jumper with name stenciled across the front chest was the same.  The “Dixie cup” hat had gotten smaller, though. Midshipmen still marched to class.  Plebes (freshmen) marched in the corridors of Bancroft Hall, squaring corners, clicking heels, saluting at officers.  At meals, plebes ate a “square meal” bringing their fork or spoon up vertically to mouth level, then bringing it mouthward, like a steam shovel (excavating machine).

Even in 2014 at the Academy, 121 years after Ned graduated, many things are still the same.  Of course, when Ned was studying naval boilers they were fired with coal, and now we use gas turbines and nuclear power.  By the way, on USS Bennington, the ship Ned sailed in for two years, blew up with a tremendous boiler explosion in 1905.  Sixty-two men died then.

Ned studied how to fire the big guns being built onto warships in the 1890s, and 64 years later we were still learning how to operate and fire the 16-inch guns aboard our battleships.  Today, Midshipmen, male and female, learn about laser-guided bombs, Tomahawk missiles, directed energy weapons, and all manner of sophisticated detection, communication and warfighting equipment.

If Ned would have been able to stay in the Navy, he would probably have fought Spain in the Spanish-American War of 1898, either in the Philippine Islands or in Cuba.

It’s not known if Ned had a girlfriend, but when he graduated in 1893 he would not have been allowed to marry.  Naval leaders in those days wisely prevented young men from marrying before the long cruises they took.  Only after he had returned from his two-year cruise to the Mediterranean and around South America to California would he have been able to marry.  Had he passed that physical, he would then have received his commission as an Ensign.

But that was not to happen.  It’s hard to understand any time a young person takes his or her life.  Then, or today.

Ned had obtained a magnificent education, and he’d topped it off with two years at sea on a Navy gunboat, covering a lot of land and water.

Of course it is discouraging when the medics tell you that you won’t be able to continue in the naval service, but it does not appear that his disability was life-threatening.  Whatever they detected meant that he should not be subjected to the harsh life at sea.  At any rate, those around Ned related that he was very depressed.

Perhaps if Ned had lived in this century, he might have found a way to a new life.

Posted by The Personal Navigator at 1:12 PM