History of Art in America 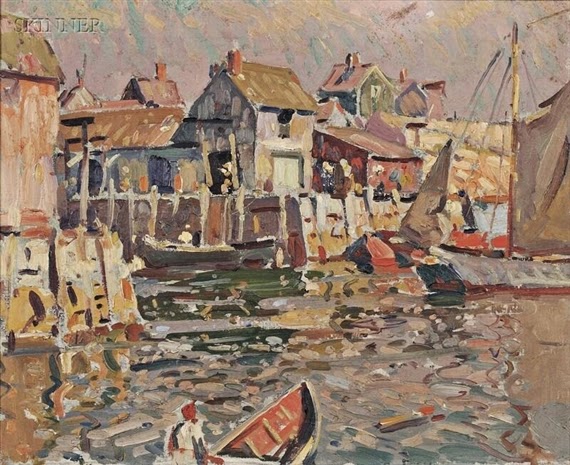 Since my wife and I came to Rockport to live in 1989, one very formidable woman has cast her shadow over our lives.

If you ever met Lura Hall Phillips, you’d remember her.  She was a smart and determined woman who enlisted Marty and me in working with Millbrook Meadow Committee, and we’ve been in it ever since, for 25 years.  Lura was the wife of Stanley N. Phillips, a noted artist.

The assistant curator was Lura, and she knew of no such brochure, but added, “But there should be something.”  John Cooley overheard the conversation, and set about to write this book.  However, knowing Lura, if he had not volunteered, sooner or later he would find himself writing it.   Lura got things done, one way or another.

Rockport has achieved the status of one of the finest art colonies in the world.
John Cooley’s little book will explain that with a string of memories and vignettes about the early artists who came here, set up easels, painted, and then stayed, many for the rest of their lives.
Cooley begins with a lengthy list of artists, writers and sculptors who visited Cape Ann in the nineteenth century, including Ralph Waldo Emerson, Winslow Homer, Henry David Thoreau, Alexander Graham Bell, and Rudyard Kipling.

Gilbert Tucker Margeson (1852-1949) operated the telegraph key in Gloucester for Western Union, ran a stationery story on Main Street in Rockport, and collected taxes for the Town.  Oh, and he was also an accomplished painter of the sea and ships. He opened his studio here in 1873.
Parker S. Perkins, (1862-1942) famed for his white suit with a flower in the lapel and a straw hat with red band. He kept at least 20 cats.  Other artists said, “Nobody painted the sea just as Parker Perkins painted it.” He came to town a little after Margeson.

William Harrison Cady (1872-1933) came to Rockport before 1900, and worked closely with Margeson and admired Perkins.  He is most famous for the some 15,000 drawings he did for Thornton Burgess’ animal stories about Johnny Chuck, Reddy Fox and Peter Rabbit.

William Lester Stephens (1886-1969) was the first native son of Rockport. Parker Perkins recognized his talent, and gave him lessons. Stephens went away to study at the Boston Museum School, wrote for a Boston weekly newspaper and worked in an antique store.  Soon he returned to Rockport and built a studio in Holbrook Court.

Stephens spent a year in the Army in World War I, and was discharged in France.  Then he remained in Europe for a while, painting.  He painted enough for two shows back in Boston. 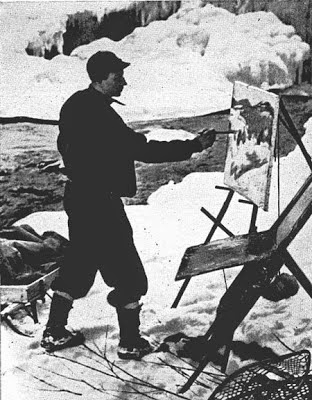 Hibbard at work, ca. 1938
Aldro T. Hibbard (1886-1972) came to town in 1920, a packet of paints in one hip pocket, and a baseball glove in the other.  He was pleased to see Stephens here; the two had attended art school together.  He set up work in an old harness shop and livery stable back of what is now Tom Nicholas’ Gallery. He organized the Rockport Summer School of Painting, and it operated until 1950. He was a major influence for artists who followed, such as Paul Strisik and Nicholas.

In 1921 local artists decided to hold their first local exhibition.  To plan it, and also to form an artists’ association, they met in Hibbard’s school.  By now there were about 50 artists—year-round and summer—painting in Rockport.  Harry Vincent was elected president, Hibbard secretary, and an executive committee included Stephens. The treasurer was Howard E. Smith, a nationally known portrait painter. The exhibition they planned soon took place, in the Congregational Church. 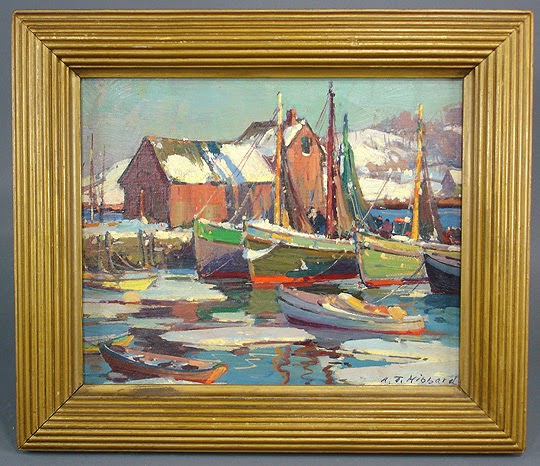 As soon as the artists formed their association, they began looking for a home.  Finally, in 1929 they were able to buy the old tavern on Main Street. The price was $6000. The house, built before 1878, was converted by Captain Josiah Haskell into a tavern, and then Caleb Norwood used it as an inn, and established a dance hall on the second floor.  This had been an inn, and a stage coach stop at various times. Cooley writes happily about the vibrant social life of these artists.  It was simple, but they seem to have kept themselves entertained with teas, games of charades, and chowder parties at each other’s homes.  There were Saturday night suppers and dances at Murray Hall and Haskins Hall.  There were scavenger hunts in Dogtown and in the South Woods, and some enjoyed sailing. Hibbard, of course, was thoroughly involved with baseball at Evans Field. Each year they held a costume ball as a major fund raiser, working to pay off the mortgage on the RAA’s Old Tavern.

Rockport was becoming better known to anyone who looked at the thousands of paintings that made their way across America and the world, and also articles in magazines about this quaint village with the granite quarries, the fishermen and the beautiful scenery.

About 1940 Hibbard noted that the expanding art colony “realized the necessity of appealing to the townspeople to preserve as far as possible the quaintness and antiquity of the town.” Rockport, he said, “still had enough of its original character to be worth saving,” and he quoted one artist: “’the town’s all right; leave it alone.’”

Hibbard’s advice still holds.  While towns all around have filled up with fast-food chain stores, and other efforts toward homogeneity and so-called modernity, Rockport has resisted the temptation to “look like every other town”.
-end-

We in the History Book Club of Rockport are indebted to Dr. Janos Posfai for recommending this topic for the month of October, 2014.

Posted by The Personal Navigator at 8:08 AM