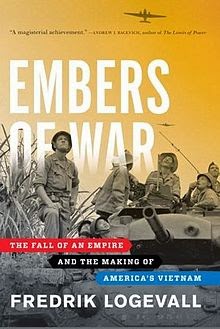 Fredrik Logevall, Embers of War: The Fall of an Empire and the Making of America’s Vietnam, New York: Random House. 2012. 839 pp.
America’s long war in Viet Nam left its mark on our country in many ways.  Not only some 58,000 men and women died in that long war, but countless others were permanently scarred.
At home the country was deeply divided, in a way that those who had lived through World War II could not envision.
As a naval officer, I was very late in taking part in that war.  I was given command of a destroyer, and took command of the Florida-based USS McCaffery as we stopped for fuel on the island of Midway, as we sailed westward to the Gulf of Tonkin.  We arrived there in November, 1972, and conducted naval gun attacks against North Vietnamese targets until late in January, 1973, when a ceasefire ended America’s combat role there.
Fredrik Logevall has produced an excellent history of  Indochina that takes the reader through World War II, and then those years from 1945 when the Japanese who had occupied the country pulled out, and the French tried to return. They did return, but the Vietnamese had had a bellyful of colonialism under the French, and they felt ready to throw them out.
Franklin D. Roosevelt and Winston Churchill met in the early stages of World War II, even before the U.S. had entered the war aboard two naval warships in Placentia Bay, Newfoundland and worked out an agreement for the allied nations about the world after the war. That was the Atlantic Charter. One principal statement was a declaration that colonies all over the world would be given the right of self-determination after the war.
Roosevelt felt strongly about this, but Churchill agreed simply to get American cooperation at a time when Great Britain faced annihilation by Germany. Roosevelt died just five months before the war ended; if he had been president longer, he probably would have kept the French from even thinking about retaining Indochina after the Japanese had left.
However, Harry Truman became president, and he knew little about foreign policy, or colonialism, and approached the situation in Indochina like most Americans of the time would have.  The French had ruled before the war, so they should continue afterward. 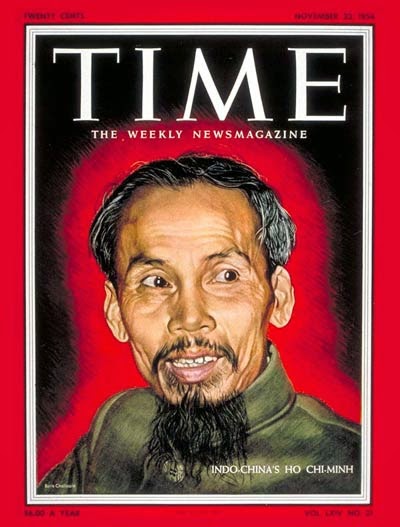 Time cover of Ho Chi Minh, Nov. 22, 1954
Logevall introduces us to Ho Chi Minh, who is a young man when he travels to Paris at the peace conference after World War I in 1919.  Dressed in his best suit, this young Vietnamese hopes to have a visit with Woodrow Wilson, and acquaint him with the plight of Indochina under the harsh rule of the French.  But Wilson won’t see him.
Ho is an absolutely dedicated Vietnamese patriot.  He reached out to the Americans to save his country, beginning in 1919 and at different times afterward.  He was not always a dedicated communist, and therefore an absolute enemy of the U.S.
Logevall floats the proposition that if we and Ho had worked together after World War II to build an Indochina destined for self-rule, it could have become a strong friend of the United States in the region, instead of a “domino”.
It is tempting today to look questioningly at the white-hot hatred and fear that our leaders, from Truman, then Eisenhower, Kennedy and Johnson--- felt about communism.  Eisenhower introduced the idea that we absolutely had to support the French to keep Vietnam out of the hands of the communists, because at that time they were gobbling up countries around the world:  Hungary, Czechoslovakia, Poland, Bulgaria, Albania, China, Rumania, Yugoslavia, Mongolia, Somalia, Ethiopia, Afghanistan, Sudan, South Yemen, Benin, Mozambique --- one domino after another.
Next came Soviet sponsorship of emerging former colonies in Africa like the Congo and Angola, and Egypt, Libya, Syria and Iraq, Cuba and Nicaragua.
Now, Communism is a mere shell of its former self, but in those years, we felt seriously threatened.
Logevall does a marvelous job of reporting on the diplomatic conferences that took place over Indochina/Vietnam over the years, but his best piece of writing is his description of Dien Bien Phu.
In 1954 the French decided to build this base in an area 200 miles west of Hanoi, up near the Laotian border, on the main route between the two countries.  This would be a strong base that would prevent Ho Chi Minh’s Viet Minh from marching into Laos, and, the French thought, serve to defeat the Viet Minh once and for all.
Its location was in a valley where its guns could cover the floor of the valley, and the surrounding mountains were far enough away that they could not be used by enemy artillery to attack.
The base could only be supplied by air, which seems to me to be such a stupid place to establish a base.  Logevall narrates in colorful detail how the French generals planned and built this base.  The author also relates the Viet Minh side as to how they marched their troops down to surround the base, and the tremendous loss of human life on both sides. 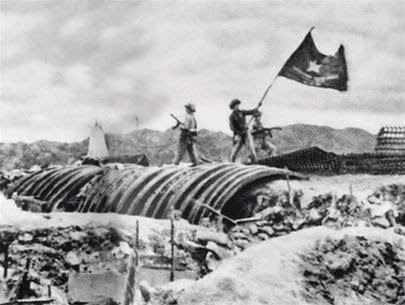 Dien Bien Phu was still raging when the 1954 Geneva Peace Conference convened. It ended on May 7, with the Viet Minh flag flying over the French base.  This conference was intended to settle issues remaining on the Korean Peninsula and in Vietnam.  Participants were the USSR, the People’s Republic of China, France, the United Kingdom, the U.S. and for Vietnam the Viet Minh and the government of Ngô Đình Diệm.
John Foster Dulles represented the United States at the start of Geneva, but he showed himself to be so virulently against the communists that there could be no negotiation.  When he returned to the U.S. and turned over negotiation to Walter Bedell Smith, negotiations involving the U.S. became more achievable. Churchill called Dulles a “pompous ass.”
Those were the years that Senator McCarthy was holding forth with his “Communist behind every tree” witch hunt.  We really made Communists seem 20 feet tall!  It is fascinating to me to see how we closed off Cuba and have kept it closed off, because it is communist, albeit a sad advertisement for any economic story, yet we never closed off diplomatic relations with the Soviet Union.  And, when Nixon was President, we did the unthinkable and initiated relations with the People’s Republic of China!
The 1954 Geneva Conference resulted in partition of Vietnam at the 17th parallel, with the government of Ngô Đình Diệm ruling South Vietnam from Saigon, and the Viet Minh under Ho ruling the North from Hanoi.  Ngô had been living in exile in the U.S., and as a Catholic he had made all the connections to build strong support in America and from the Catholic Church. Eisenhower invited Ngô to visit the United States in 1957 and he was treated like royalty with ticker tape parades and honors and fanfare, touted as an example of the triumph of free people over communism.
Ngô was yet another example of a tinhorn dictator playing up opposition to communism while the U.S. filled his pockets with gold.  By 1963 his regime became unbearable to the U.S. and President Kennedy ordered a coup to depose him.  On November 2, 1963 the South Vietnamese Army took over the government and Ngô and his brother were assassinated. Twenty days later, Kennedy was assassinated.
It seems that one lesson can be made of all these years, from 1945 until today, and that is the idea that you accomplish nothing by not recognizing and not speaking to people representing opposing states.   It is quite possible that if President Wilson had taken the time to visit with Ho Chi Minh, the story of Vietnam might have been quite different. Likewise, if Franklin D. Roosevelt had lived to insist of driving the French out of Indochina at the end of World War II, we might have been able to help establish a friendly government, led by Ho Chi Minh.
Those are “ifs”, and history is full of those. 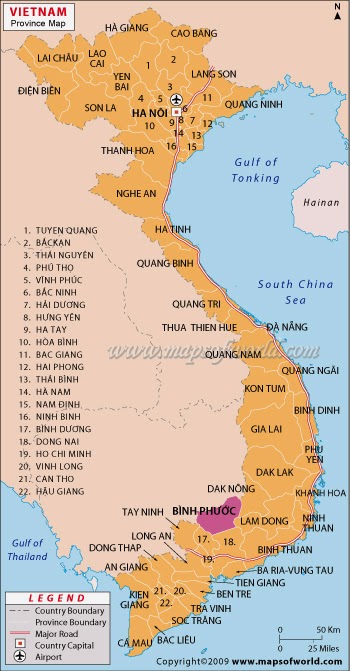 NOTE:  Our next topic will be the History of Iran or Persia.  Read any book about that fascinating land, from the time of Cyrus or Darius, the Achaemenids, Sassanids, both Shahs, Mossadegh, Komeini... up until today. We'll meet at Rockport Public Library to discuss our books on Wednesday, August 27th at 7 p.m. NOTE:  NEXT MEETING SET FOR WED. SEPT. 3 VICE AUG. 27!

Posted by The Personal Navigator at 8:38 AM