Was there really a Cold War? 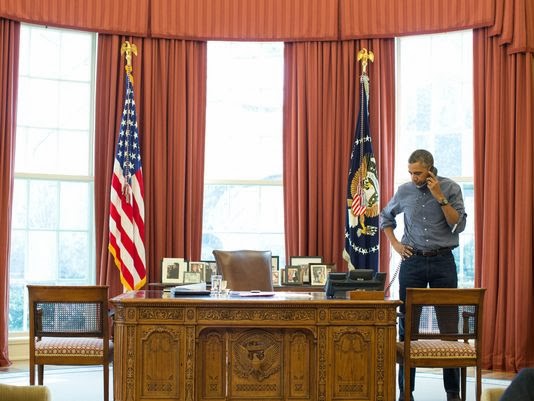 The Cold War is over, and besides, it was just a 47-year-old tennis match between two old fuddy-duddies.
It’s easy for bright young people today to dismiss the Cold War as something that happened after World War II and before the Islamic terrorists decided that it was their time for history.
When I was slogging through the snow along Schmidt’s Bank in Leningrad, USSR, doing my job as a naval attaché in the Soviet Union (1983), young Columbia student Barack Obama wrote a long article for the school magazine placing the blame for U.S.-Soviet tensions largely on America's "war mentality" and the "twisted logic" of the Cold War. President Reagan's defense buildup, according to Obama, contributed to the "silent spread of militarism" and reflected our "distorted national priorities" rather than what should be our goal: a "nuclear free world." (Jonah Goldberg: Obama in denial on Russia, USA Today, Mar 3, 2014.)
I hear that sort of thing a lot.  It’s as if all those years of Korea, and Viet Nam, and the Berlin Blockade, Julius and Ethel Rosenberg, the Truman Doctrine, the Cuban Missile Crisis, Francis Gary Powers, the Hungarian Uprising, Prague Spring, the downing of KAL007, Congo, Angola, the Arab-Israeli wars, the Suez Crisis and all the rest were just a time of innocent jostling. 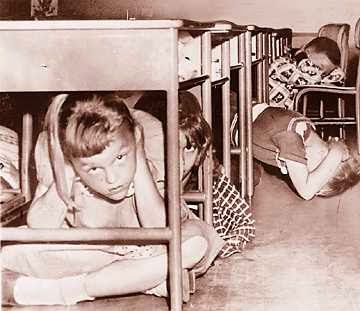 Most people born since the Berlin Wall was torn down in 1989 cannot possibly understand the real fear that Americans faced when Khrushchev was caught sneaking missiles into Cuba, and President Kennedy declared a Quarantine.  The prospect of nuclear weapons devastating our cities, and America dissolving into a cloud of radioactive dust were very real in 1962.  After all, that was just 17 years after World War II.
Those of us old enough to remember, and who were a part of all that confrontation between Communists and Americans and our allies realize that this was nearly a half-century of often deadly confrontation.
Mr. Obama faulted President Reagan for his defense buildup, but Obama could not have imagined the USSR that we saw in 1981. The Soviet defense establishment was all they had going for them.  Their economy was hollowed out.  Competing with the U.S. was a killer for them.
It’s quite true that if one had the luxury of doing all that over again, we might have done it all better.  We now operate from the smug knowledge that indeed the world did NOT blow up, even with all those nuclear weapons.  Communism, which swallowed up country after country as World War II ended, did not go on to swallow up the world.  We stood our ground, and our way of life and our economy turned out to be solid after all.  And communism folded like a cheap umbrella, its hollowness, hypocrisy and evil exposed for all to see.
Now, along comes Vladimir Putin, and, 22 years after the USSR collapsed, and fresh from his triumph at the Sochi Olympics, he finds himself wishing for the good old days of the Hammer and Sickle. 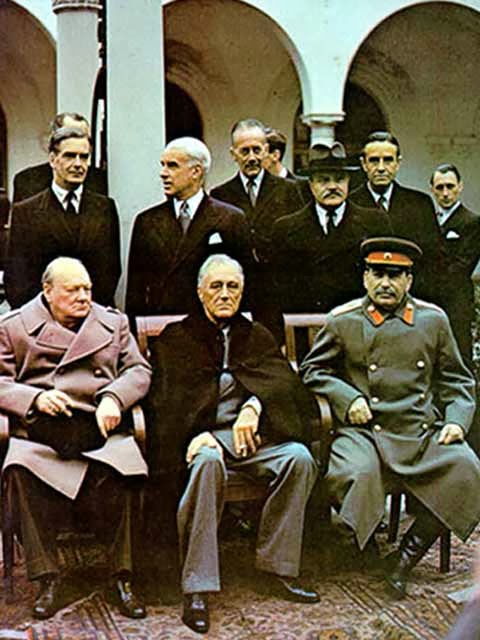 Stalin hosted Roosevelt and Churchill in Yalta,  Crimea, in 1945.

The competition and conflict between Ukrainians and Russians is centuries old.  The story of Crimea and Russia is also very old, and when Khrushchev gave the Black Sea peninsula to the Ukrainian SSR in 1954, how was he to know that one day the Ukraine would be a separate country?
As the current leader of what was the central part of Union of Socialist Republics, Putin is not about to accept secondary status for his nation.  He is not going to sit still while Ukrainians fight amongst themselves just to the south. He also has the Chechens and other angry people in the old Soviet sphere to deal with. And he is definitely not going to listen to lectures from those busybody Americans.
And then there is President Obama.  He may have learned some history since 1983, but he thinks he is “the leader of the free world” and the “leader of the last superpower standing” and entitled to advise and warn Putin.
If I were Obama, I think I would be very circumspect about handing out advice or warnings.  If he warns, he must back up his warnings with action that the U.S. and our allies will take. If he offers advice, he must convey that this is the advice not of a nice guy from Chicago, but the advice of the leader of a country which is ready to back up that advice with concrete action.
We are the same Americans who saved Stalin and the USSR in World War II;
The same ones who forced Khrushchev to back down in Cuba in 1962.
And if Obama is conversing with Putin, or even just talking to the press about this business, he must get across the fact that he knows much more about Russian-American relations than he thought he knew in 1983.
What can the U.S. and its allies do or threaten to do, in order to get the Russians to moderate their warlike stance in Ukraine?
Of course, we can enact sanctions.
We and our allies can seek to isolate Russia, such as by excluding them from international economic conferences, as several Republican senators have suggested.
We can freeze bank accounts and restrict trade deals and privileges granted to Russians.
Putin cares very much about Russia’s image in the world, or he wouldn’t have invested so much in money and effort in Sochi.  Obama understands public relations.  He can study the best way to suggest that Putin is screwing himself and his country with his actions.  Obama can look for ways to help Putin stay in charge, and act statesmanlike in dealing with Ukraine, while still recognizing that there are benefits from “playing nice” in the world today.

Posted by The Personal Navigator at 10:58 AM