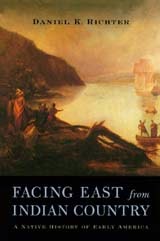 Here is a book that puts the moccasin on the other foot.  When we normally think and write about the Indians that white men encountered when they first arrived on these shores several hundred years, it’s from the point of view of “looking west” at these red men, staring at European faces as our forefathers made their first contact with this continent.
Daniel Richter begins “Facing East” by telling of a visit he made to St. Louis, Missouri, which, before the arrival of Europeans, was the site of the largest city in North America north of Mexico.  It was Cahokia, near present-day East St. Louis, and here, Indians had created a large city for the living and the deceased.  There were burial mounds and ceremonial platforms, a “woodhenge” of logs arranged in a circle to track the movements of the sun, moon and stars, and room for many to live.
At the time that Columbus and his men were “discovered” by Indians in the Caribbean, some two million Native Americans inhabited the country east of the Mississippi. Tribes speaking Moskogean languages occupied the southeast, Sioan the Piedmont areas of the east; Iroquoian from the Great Lakes eastward and down into the Carolinas; and Algonquian from the Chesapeake up the coast.  For centuries the Indians had moved about the county on the great rivers.
For some 10,000 years these people had lived in an environment unconnected with other humans, so the first Europeans, who were the Darwinian survivors of all the diseases of their homelands, brought diseases which cut like a knife through Indian tribes. By the start of the Revolution, only some 200,000 Indians lived in that huge area.
Richter personalized his story by picking out three notable Indians because their stories area well-known to many: 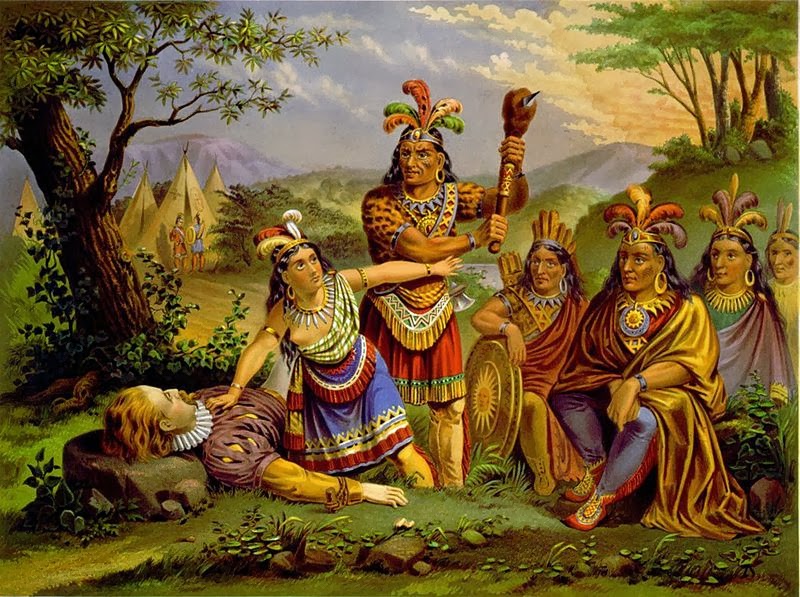 Pocahontas, daughter of Chief Powhatan, who was a young Indian maiden first seen at Jamestown in 1607, had a relationship with John Smith and then married another Englishman, John Rolfe.  She went to England in 1616, where she died.
Kateri Tekakwitha was a Mohawk Iroquois born in 1656.  She was discovered by Jesuit missionaries, who converted her to Christianity.  Her short life was one of ascetism and sacrifice; before she died in 1680 she led many others to Christianity.  She was beatified by Pope John Paul II in 1980.
Metacom, the Wampanoag called King Philip, waged bitter war against colonists.  Yet, centuries after he had lived, in the 19th century he was revered as an Indian hero of our country.
In recent years, perhaps even going back to the time of President Andrew Jackson, the story of the Indians of America is a tragic tale.  Once proud men of the woods and plains bundled together and marched westward, made to settle in ever-shrinking reservations.  That is a true picture, of course, but there is much more, and Richter tries to explain that to the reader.  In the early parts of the book his narrative is fascinating, but as he goes forward, up to the time of the American Revolution, his narrative gets enormously detailed and complicated.
One of the problems one has in writing about the history of the Indians in America is that there are no written records—only records written by Europeans as they reacted to their encounters with Indians.  Then, explorers would take Indians back to Europe to show them off, perhaps use them as slaves, often to train them so that they could return as interpreters for future European ventures.  Bit by bit, these people were able to explain parts of their oral history and way of life to people who did record the information, and this is what Richter gratefully includes in his history.
In short, this is the discovery of these ugly bearded men on floating islands that appeared in various locations on the coast of present-day Canada and America.  These strange creatures sometimes began the encounter by attacking the Indians with these hard sticks that made a loud noise.  Often they brought pretty colored beads, and sometimes they performed strange rituals and offered the Indians hard biscuits and a red drink.  [The early Christian missionaries were offering the Indians communion.]
The early explorers were looking for a quick scheme to enrich themselves with gold and gems.  The Spaniards had gathered up such riches in South America and they looked for it here, as well.  When they didn’t find it, they pressed further and further inland.  Early reports that went back to Europe were discouraging for the get-rich-quick people.  However soon, often with help from the Indians, they discovered furs, deerskins, tobacco, and all kinds of vegetables, as well as rich catches of fish.
Richter does a good job of letting us view these explorers through the eyes of Indians, as he describes their religious and spiritual outlook, and the world view they had as these strangers appeared.
As time went on, Indians got to look forward to the material things that the Europeans brought in their ships, like kettles and axes and knives and cloth, and over generations they grew to depend upon these things, which they purchased with furs and skins and whatever else the Europeans valued.
Americans today are often quick to condemn our forefathers in the way they treated the Indians.  One must be scrupulously careful to try to understand the environment that early settlers saw.  Each encounter, from those by Cartier and Champlain in the north, to those by DeSoto in the south, had its own villains and victims.  Many of our forefathers really wanted to make a new life for themselves, but they brought cattle, and wanted to plant farms, and that was enough to upset the Indians.  You can understand that to Indians, planting fields, raising domesticated livestock, putting in fences --- were all things that they could not tolerate.
Before you condemn our forefathers, first learn all you can about the world that they were living in.  It makes little sense to evaluate them by 2014 standards.  The men and women who arrived on America’s shores in 1620 and afterward were making a huge jump for a new life.  In many cases their lives back in Europe were miserable.  And when they arrived here, in some cases their very presence was a threat to the Indians.
Try to study their lives, and try to understand the lives of the Indians, and think how you would have done it better.

Comments?  Contact scoulbourn1@verizon.net
Posted by The Personal Navigator at 6:38 PM