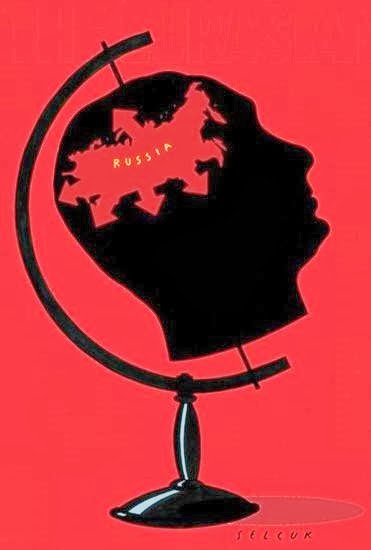 SELÇUK DEMIREL FOR THE BOSTON GLOBE

Americans are worried about a modern-day Soviet Union?
In his discussion about Vladimir Putin’s recent actions and words, Leon Neyfakh of the Boston Globe brings up an idea that is getting a lot of airing lately.
The collapse of the old Soviet Union in 1991 was an event that we in the West welcomed with great joy.
But, for an old KGB hand like Vladimir Putin, it is not surprising that he views it as
“the greatest geopolitical catastrophe of the century.”
Neyfakh reports that the prospect of a new union of old Soviet states causes great uneasiness in Washington.
Since the USSR imploded in 1991 we Americans have been the world’s lone superpower.
It’s been lonesome.  Like one hand clapping.  Newton’s Third Law: For every action, there is an equal and opposite reaction.  Our world has thrived on balance—action and reaction.  USA vs. USSR…. Capitalism vs. Communism.   It’s been lonesome in the superpower suite.
For ten years, we remained distant from conflict in the world, distant even from the meltdown in old Yugoslavia, when the Serbs, Croats, Bosnians and all tried to kill each other.
Then came the Arabs and the terrorists who highjacked four U.S. airliners, drove two into the World Trade Center and one into the Pentagon, and initiated what President George W. Bush called the “War on Terror”.  That brought on our invasion of Afghanistan, and Iran.
But fighting embedded Arabs and other assorted Islamic fanatics has not been a contest between two very powerful adversaries. Our opponent has been one nasty, murderous group of throwbacks from an earlier century, thoroughly filled with hatred for America, the West, and for our freedom, our values, and perhaps our success.  Many Americans have died in the conflict since 1991, but this has never been a contest between two world powers.
During the days of U.S.-Soviet confrontation, the Soviets backed the Arabs in Syria, Iraq, Libya, and Egypt, supported them in their opposition to Israel and the West.  We sided with Pakistan, they sided with India.  We each had allies in Africa and the rest of the world.  The Chinese had their favorites, and they weren’t always the same as those of the USSR.  But this tension between east and west enabled small nations to play between the superpowers for special attention.  All this kept down the temperature in the Middle East, so it took the angry Arabs ten years to lash out on September 11, 2001.
Now Mr. Putin wants to create the 21st Century Version of the USSR—a Eurasian Union of nations combining their market power for trade, and more.  Of course, Putin is for “more” and we’ll hear more of his disdain for America, for our slackness, our loss of moral values, perhaps our great loss of military strength.
And we hear that the “Eurasian Union” causes great uneasiness in Washington.
If you believe in Newton’s Third Law, you might just think that the formation of a strong Eurasian Union might be the best thing for the world today.
It might jerk Americans into realizing that we have gotten a little soft these past few decades.  Certainly our national morality has relaxed. Our competitive spirit is questionable.  And now we are talking about vastly reducing our armed forces.
Our President seems fixated upon providing more and better government services, more and better health care. More and more, but perhaps reducing our capability to back up our words with actions when dealing with leaders like Mr. Putin.
What kind of man or woman do we need for our next President?
These are interesting times.
--Sam Coulbourn
scoulbourn1@verizon.net

From the Boston Globe, Sunday, March 9, 2014:
Putin’s long game? Meet the Eurasian Union
It starts in 2015 and sounds like a scheme to rebuild the USSR, but its history is quite different — and troubling for the West
By Leon Neyfakh
WHAT IS Vladimir Putin up to? The crisis in Ukraine, brought to a boil when Russia’s president sent troops into the Crimean peninsula, has created almost a cottage industry of guessing at the autocratic leader’s intentions from one day to the next.
When it comes to Putin’s long-term strategy, however, there is at least one concrete plan that offers some insight, and one specific date that Russia observers are looking ahead to. That date, Jan. 1, 2015, is expected to mark the birth of an important new organization linking Russia with an as-yet-undetermined constellation of its neighboring countries—an alliance Putin has dubbed the Eurasian Union.  [For Neyfakh's story see:
https://www.bostonglobe.com/ideas/2014/03/09/putin-long-game-meet-eurasian-union/1eKLXEC3TJfzqK54elX5fL/story.html   ]
Leon Neyfakh is the staff writer for Ideas. E-mail leon.neyfakh@globe.com.

Posted by The Personal Navigator at 2:53 PM