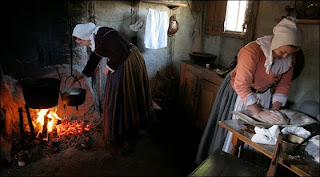 Imagine…you’ve been here in now all summer.  The ship and crew who brought you over from have gone back, promising to return next spring.
You and the 13 other men have been cutting timber and building log cabins, and now you have finished harvesting the vegetables you grew.  You’ve been cutting firewood like mad lately, because you think it’s going to be cold this winter in that little cabin.  Even with the 13 men and the cow… and the chickens.
You’re the only Englishmen you have seen since you arrived.  A few Indians have come by, and one even spoke a little English!
You wonder, why is it that you wind up here in what they call “Gloucester Plantation” with not a white soul around, and these Indians show up and one knows some English?  Where do these guys get exposed to English in this God-forsaken, rock-strewn piece of nowhere?

The year is 1623.  You’ve heard from the Englishmen living down at Plymouth Plantation that winters here are ------ words that Puritans do not use!
Back in Dorset Shire, , a group called themselves the Dorchester Company decided they would gather up their funds and send a boat to the .  They gathered £800, enough to buy a small boat and load it up with a crew, and 14 others who would form a new plantation, wherever they landed.  The plan was to land the 14 and some cattle and chickens, and then they would start to build houses and start a small farm.  The sailors would lay out the drying racks (stages) for drying fish, then get to work harvesting all the cod they could carry.  When winter grew near, the boat and crew returned to , leaving the settlers to settle.
Other boats were heading for many other destinations along the shoreline in those years.  Some landed at and began a plantation.  Others at a town they named Saco, also up in what became the .  And nearby, at the mouth of the , another settlement began.
Another settlement sprang up in Nantasket, and , and .

In 1624 the Dorchester Company sent two ships to re-supply and conduct fishing, but they were anxious to make some money, and this colony business was slow music for them.  Imagine—setting these guys up to grow stuff, others to catch fish, in this place called .  Is it going to be a moneymaker?
They stayed with it another year. They sent two ships again in 1625.  With some women, more cows, and more chickens.
Women.  Imagine.  We should have thought of that before!

All this time, more English ships were landing, bringing settlers to the .  Plymouth Company, who bankrolled the starving Plymouth Colony, was anxious to provide a little variety amongst those very religious, strait-laced Puritans.  They decided to send the Reverend Lyford, who had religious views a little more liberal than the group.  This Rev. Lyford was a nice guy, but he had been caught in what might today be considered an “indiscretion” with a woman not his wife.
When he arrived in Puritan Plymouth, he was like the skunk at the picnic.  This band of very religious, very stern and severe men and women would have no part of him.
Rev. Lyford and the gentleman who was his traveling companion were bounced, and went to Nantasket.
Back in England Dorchester Company sought a man of stature to govern the people in Gloucester Plantation, so they chose a notable named Roger Conant.  They sent him to take over as governor.  When Conant arrived in Massachusetts Bay, he heard that Rev. Lyford was looking for a place to settle, so he asked him to join him in .
In those days, in order for any plantation to become viable, in addition to farmers to farm, women to cook and bear children, you needed a minister.  Religion, and a church, were absolutely vital.  Going to church every Sunday, usually all day Sunday, was not optional.
Now the small settlement had cattle, farmers, a minister and a governor. These first settlers were not Puritans.  In fact, some had had some problems with drunkenness.
However, by 1625 the Dorchester Company found that the whole venture was a losing proposition and they abandoned it.  Some of the settlers went back to , and Conant and some of the group picked up everything, including their small homes, and moved to Naumkeag, which is now .
More ships were arriving every few weeks, and landing settlers here, there and everywhere, and was growing.  While Conant and most of the early arrivals had moved to and to , down in what was called , more Englishmen arrived in and began to carve out farms and send boats to sea to harvest the rich bounty of fish.
It is interesting to read about the first families of , and the amazing mobility of people, up and down the coast.  Many would arrive and live in , then move to on the , or to New Gloucester and , in .  And people from other settlements would move to .
Richard Tarr and his family arrived at in a tiny boat in 1690 after sailing from , , then to .  He is said to be the first settler of , which would become the Fifth Parish of Gloucester, and then in 1840 would become Rockport. 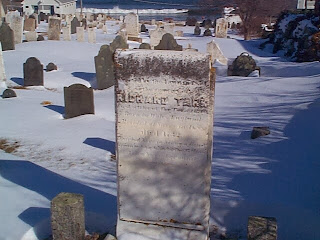 He and his family lived alone in the little cabin he built, on what is now . About ten years later John Pool and his wife Sarah and five children moved from .  This was 1700.  Rockport had just taken off, because John Pool was a man of many talents.  He dammed up Davison’s Run and built a sawmill where the present Mill Dam is.  He had workers dig out the area that is now the Mill Pond.  He built the first frame house in Rockport, and by 1710 was shipping fine hemlock timber down to to build . 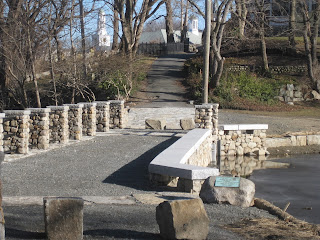 Dam to provide water power for John Pool’s sawmill.
This is the 2013 version. Brass plaque at front right is shown below. 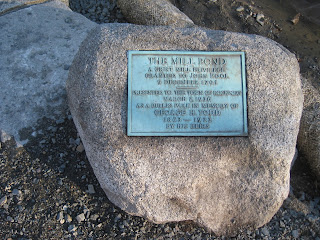 Pool became a rather wealthy man, but his wife Sarah died, and he married another, and she died.  Then another, and she died. Then another, and she lived, and in 1724 John Pool went to his rest and was buried at the foot of , with all his wives.
In 1754 there were some 300 people living in , and they didn’t like walking all the way to ’s First Parish or to Annisquam’s Third Parish for church every Sunday.  Especially during the snowy months.  They petitioned for a meeting house and a parson, and in 1754 they became the Fifth Parish.
About this time the disease of throat distemper (now called diphtheria) hit and other parts of . This deadly disease swept through the village, killing children in nearly every family. 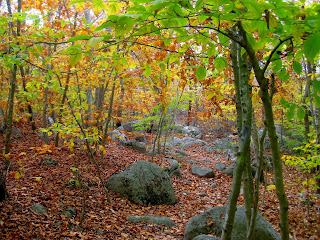 Richard Tarr and John Pool walked through this forest, now called the Town Forest, atop Pool’s Hill.  Notice the glacial till—granite boulders left over from the ice age!  Notice also—no hemlock.  Pool cut them all down.

The Revolutionary War was disastrous for .  British Navy ships conducted numerous raids all along the coast and made any kind of shipping of merchandise dangerous and costly, and fishing also became much more difficult and dangerous.  This all resulted in tremendous economic doom for , and much of the population had a hard time feeding themselves.  However, many of the local seafarers went to sea as privateers, raiding other ships and generally raising hell.  Some made a lot of money, but most did not, and many were lost at sea.
There was a short time after the war’s end when the situation persisted, but then things started to improve.  Ocean shipping returned, more jobs appeared, fishing became much more productive, farmers were able to sell and ship their goods.  By 1823 in a company was forming to extract the rich slabs of granite from the land.  Over the next several decades this would mean that , and by 1840, Rockport, would be the fastest growing part of .

Continued next month.  Learn about Rockport when it becomes a town on its own, and Hannah Jumper and her raid, and more!

Marshall, John W., Burnham, Newell, Dennis, Henry, and Cleaves, Levi, compilers;  History of the Town of Rockport, as comprised in the Centennial Address of Lemuel Gott, M.D., Extracts from the Memoranda of Ebenezer Pool, Esq., with interesting items from other sources. 1888 : Printed at Rockport Review Office.

This history was part of the October meeting of Rockport’s History Book Club.  If you live in Rockport or nearby, join us for our next meeting, on Wednesday, December 4, 2013. Because of Thanksgiving we must move from the regular last Wednesday in the month to the next Wednesday, which is in December.  The Subject is The American Labor Movement, 1900-2013.
Read any book that interests you on the Labor Movement during any part of 1900 to now--- Taft Hartley, John L. Lewis, the IWW, CIO, the ILGWU, Strikebreakers, FDR and Labor, Eugene V. Debs, Frances Perkins--- whatever suits you!

Posted by The Personal Navigator at 6:17 PM