Life in an SSBN

The Day Kennedy Was Shot 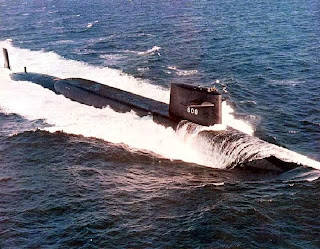 Here on the fiftieth anniversary of the Assassination of President John F. Kennedy, those of us who were alive at that time can all recall where we were, and how we reacted.

On November 22, 1963, I was Weapons officer in USS Ethan Allen (SSBN608), a fleet ballistic missile submarine.  We carried 16 Polaris A2 missiles with nuclear warheads. We were submerged in the .   These submarines had two crews, Blue and Gold.  I was in the Gold crew, and we had relieved the other crew and then undergone a month of work alongside our tender at Holy Loch .  We had been underway, submerged, for over a month at this time.
One of the agreements in resolving the Missile crisis of 1962, in return for the Soviets to remove their missiles from , was for the  to remove its Jupiter missiles from .  This left targets in the Soviet Union uncovered and so Ethan Allen and other fleet ballistic missile submarines were ordered to pick up those targets, which meant that during part of our deterrent patrols we would have to move into the eastern .
On a submarine only the officer of the deck regularly looks through the periscope, and then only on rare trips up to periscope depth.  The rest of the time we would cruise at perhaps 200 or 300 feet keel depth.  In those days we used a long floating wire that trailed several thousand feet astern to receive radio signals.  Since our mission was to be able to receive a message from the President ordering launch of our nuclear missiles, we depended upon that wire.
These were the days before cell phones and nearly everyone being instantly connected to everyone else.  That wire was all we had.  Each man aboard was entitled to receive about two “Familygrams” during a two-month patrol.  Our families could send us these messages, which were carefully censored.  They were not allowed to send us bad news, because there was nothing we could do about it.  We couldn’t answer back, and only in very vital life-and-death situations aboard the submarine would we ever surface to offload a crewmember.
On November 22, 1963 it was seven p.m. aboard our submarine when we received a flash message that President Kennedy had been shot.  We were on Zulu time, six hours ahead of , when the message arrived.
No one in our government knew what would come next, and certainly aboard that submarine we knew nothing more!
A short time after the news of the shooting, before we had even heard that Kennedy had died, we got a Weapon Systems Readiness Test (WSRT).  These were very real alerts sent to submarines on patrol, meant to test the readiness of the Polaris weapon system. 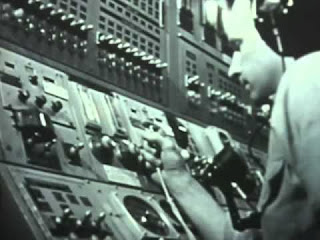 We responded to these tests just as we would for a real attack order; only the Captain and the Executive Officer knew when the message arrived if it were a test, because we were required to bring 16 missiles up to readiness for launch and flight. After the first few minutes we would be ordered to arm the warheads, that are the nuclear tips on each missile, and that was when we would all know it was the real thing.
When we heard that the President had been shot, we imagined that the assassination might be part of a large plot by the Soviets, culminating in a nuclear attack on the .  For a very scary period of time we didn’t know if we would be ordered to launch missiles for the start of World War III!
In this case it was indeed a test, and we didn’t arm the nuclear warheads. But it was scary!
We all know now that the Soviets were not launching an attack, but we didn’t know it then, and things were very tense for several hours.

In the next several days we were fed news reports which helped us to piece together a fragment of the massive television and newspaper coverage that the rest of the world was getting.  When we returned to Holy Loch in early January 1964 we received our mail, and Time and Life Magazines which reported all about the killing of the President, and then the killing of his assassin, Lee Harvey Oswald, and Kennedy’s funeral and the start of Lyndon B. Johnson’s administration. 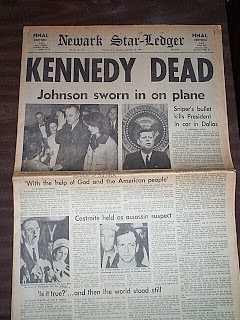 As we flew from back to , and rode the bus back to our base in , we eagerly read our personal mail, and scanned the newspapers and magazines which were loaded with this huge national story.
My “catching up” on the news now that I was back on dry land had to wait, though, because I took my wife Marty to the Navy hospital to have a little girl.   That little girl is now all grown up, and has a family of her own.

Posted by The Personal Navigator at 9:37 AM