These Old Boots Slogged in the Snow....

These Old Boots…
Slogged in the Russian snow…. 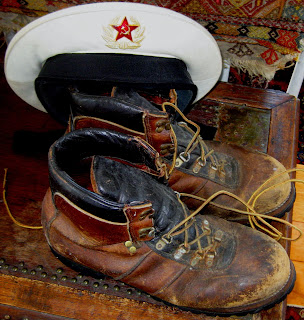 These boots took me to a lot of places.  Since they remind me
of days slogging  in the snow along the Neva in , I
photographed them with this Soviet sailor’s hat.

It was time for them to go.  I haven’t worn them in many years, yet I felt sad about putting them in a charity bin, but now some deserving soul might be able to get more miles out of them.
I bought them when we moved to in 1980, because they were awfully good walking through deep snow, and there was plenty of that.

Then we got sent to the .  I was assigned as Naval Attaché in , 1981-83.  Most of our work consisted of traveling to other cities where we could observe the .  As a naval officer, I led a group of two naval officers and one Marine officer and some of us were on the road nearly all the time.
Most of our trips consisted of catching the midnight train from Leningrad Station in , en route  (now ).  We would arrive in that far northern city about 8 a.m.  and a driver would pick us up and take us to the American Consulate.  We kept a small four-wheel drive vehicle, a Soviet Niva, at the Consulate for our business.  As soon as we dropped our bags at the Consulate, we would get in the Niva and start our travel around the city.
Our job was to observe as much as possible of the construction of new warships at the many shipyards in and around .  We would also observe what ships were in the harbor, and in the , including barges and ships, which traveled back and forth in the Soviet canal system.
Some of the time, we would park our Niva and get out and walk, often in heavy snow, to get the best look at a particular intelligence target.
The KGB knew when we had filed to travel to , and they generally followed us wherever we went.  Sometimes they followed us closely; sometimes they kept their distance.
Usually our routine included a walk along Lieutenant Schmidt’s Embankment of the , where we could see a lot of ships tied up all along the embankment.
Slogging in that snow along Schmidt’s Bank was a cold exercise. 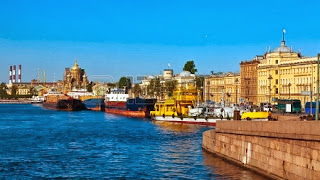 Women’s Day in —Fats took the day off.
At Schmidt’s Bank hundreds of boats and often warships and submarines tied up.  Many of the smaller, lighter draft boats were awaiting a schedule to move up the canals that cut across . Here we could see these boats and ships, and Red Fleet ships, and also ships under construction in the many shipyards of .
Whenever we would take these walks, we tried to take along our cameras and collect photos of interesting things.  Photography in this area was forbidden, however.
The KGB assigned an elderly “goon” that attachés named “Fats.”  He and some of his associates generally were around to follow us wherever we walked, or drove, and to make our job harder, or impossible.  They wore the red armbands of “Druzhniki,” or “concerned citizens.”  Sort of like elderly volunteers who operate as school crossing guards, except these were assigned to look after the foreign “spies.”  The Soviets considered all foreign diplomats spies—they hadn’t changed their attitude toward foreigners in centuries. 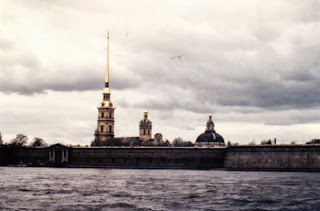 Peter and Paul Fortress, from across the

One day, March the 8th, 1983 to be exact, it was International Women’s Day. Now, in fact, the Soviets didn’t care much about women’s rights, except the right of old women to stand in the street all day long in the winter, smashing ice with a heavy iron rod.
But this day, as we arrived to do our job of collecting intelligence in , there was NO KGB.  They had the day off!
I was traveling with my assistant, Pierce Crabtree, a big, burly former Navy football player. With no KGB to bother us, we went wild photographing shipyards and ships and everything we could see.  We were driving a Soviet “Niva.”  4 x 4 vehicle.We thought this would be a great day to check out some radar installations near the Czars’ summer palace at Petrodvorets.  However, somewhere between Kipen’ and Ropsha, we got stuck in the snow.
If the KGB had been around, we would not have been able to get that far.  Now, free to travel, we had gone and gotten ourselves in trouble.  The snow was pretty deep.
Fortunately, along came a bus full of Russians.  The driver and some of the passengers got out and helped push us out of the snowbank.
The KGB would NOT have helped us out of the snowbank, but these Russians were like good neighbors you meet anywhere in the world.

Those boots took me through all that snow.  Not only in Leningrad, but also in Riga, Latvia; Tallinn, Estonia; Volgograd (Stalingrad); Kiev, Ukraine; Irkutsk, Khabarovsk and Nakhodka, Siberia and many other places.
I’ll miss those boots, and I kind of miss all that snow.

Here are some items the Personal Navigator offers:

Memories of the Russian Court, First Edition, Reprinted, November 1923  by Viroubova, Anna 1923 New York, NY: The MacMillan Co. "It is with a prayerful heart and memories deep and reverent that I begin to write the story of my long and intimate friendship with Alexandra Feodorovna, wife of Nicholas II….and of the tragedy of the Revolution which brought on her and hers such undeserved misery, and on our unhappy country such a black night of oblivion."  The author tells of life at court in , and Peterhof, Tsarskoe Selo, Livadia and elsewhere; how the Emperor whistled for the Empress, the children, and for Viroubova. Book contains many excellent photos of the Imperial family, including several aboard the Imperial Yacht Standert.  Photos of letters from Nicholas II and his children to the author are particularly poignant. One of the last letters from the Empress was written in Old Slavonic.  400 pp. 14 x 20.6 cm. Brick red decorated cloth on board, very clean and fresh. Plate showing letters in Old Slavonic is loose. Owner bookplate (William C. Bowlen, Dec. 1923) on front endpaper. No dustjacket. Very good. (5706) $130.00. History/Russia

V.O.K.S. Published by the Soviet Union Society for Cultural Relations with Foreign Countries, Vol. II No. 4, 1931    Yoffe, Yakovlev, Semyakin, Mikhailov, Tsypkin, et al 1931 Moscow, USSR: VOKS,  Trubnikovsky Pereulok, 17. V.O.K.S. (Vsyesoyuznii Obschestvo Kulturniyi Svyazii Zagranitsiy), All-Union Society for Cultural Relations with Foreign Countries was founded in 1925 and widely recognized as Stalin's heavy-handed effort at foreign propaganda.  "The Planning of Science"-- how it is done with the new Five-Year Plan, by the new socialist people. The language of the "Dictatorship of the Proletariat" referring to the "shock-brigade troops and the storming detachment of Communist Youth" is so obviously immature, in its attempt to speak to a sophisticated foreign audience, yet satisfy all the propaganda needs of an ignorant bureaucracy at home. "Tecnics of the Future" by Academician A.F. Yoffe. talks of new ideas for harnessing solar energy, and efforts to harness water power (Volkhovstroi, Svirstroi, Dneprostroi). Poem "Industrial 1931" by Vassili Semyakin, a worker in a Moscow Co-operative Candy Factory. "The Fight for the Metal" story by N. Mikhailov, worker at the "Sickle and Hammer" Sheet-rolling Factory produces a fanciful story of the massive effort in the factory to fulfill the Five-Year Plan. Photos and text tell story of return of Maxim Gorki to in May, 1931. "What is Polytechnical Education?" by I. Pistrak includes photos of men and women learning on heavy machines. "Sverdlovia"  by E. Ukhalov. Photo essay shows foreign workers in the ; Italian woman instructs Uzbek women workers in silk mill. 100 pp. 17 x 26 cm. Periodical, heavy cardboard cover loose from text block, spine worn, edges frayed. Fair. (8126) $85.00. History/Propaganda/Soviet

Detskoye Selo --Parks and Palaces  Tourist Guide for Intourists [in English] N. Arkhangelsky, Editor 1934 , : Park and Palace Dept., Soviet. Early in the life of the , this little Stalin-era guide was produced for English-speaking Intourist visitors to St. Peterburg, and especially for the 26 kilometer trip  to Tsarskoye Selo, renamed by the Soviets "Detskoye Selo" or "Children's Village" in 1918, reflecting the Soviets' uneasiness with the history of the Tsars.  In re-naming it, the Soviets designated this village one for caring for children, and this text states that"formerly the domain of a privileged few, have become a source of education and enlightenment" for the masses. In 1937 it was re-named "Pushkin". Text in this little book tells about life in the time of the Tsars, but is generous with the Soviet approach. Photos show , Gala Hall, Amber Hall, Large Throne Hall, White Hall, Drawing Room, Private Chambers of Catherine II, , Chinese Theatre, more. 64 pp.10.7 x 14.4 cm. Paper booklet with dustjacket with view of , minor wear and chips on dustjacket, booklet very good. (8122) $65.00. Travel

--Putyevodityel' dlya Inturistov Guide for Intourists [in English]           N. Arkhangelsky, Editor 1934 : Park and Palace Dept., Leningrad Soviet. Early in the life of the Soviet Union, this little guide was produced for English-speaking Intourist visitors to . Text in this little book is heavy with early Soviet jargon, touting the . Pictures of Statue of Lenin, Ploschad Vostaniya, , the , The Europe Hotel, Statue of Peter I, Exchange and Rostral Columns, ,  more.  Cover features drawing of Rostral column.  64 pp. 10.7 x 14.4 cm. Paper booklet with dustjacket containing picture of scene along the . Minor wear and chips on dustjacket, booklet very good. (8120) $35.00. Travel

Peterhof --Parks and Palaces  Tourist Guide to Tsar's Summer Residence near [in English] N. Arkhangelsky, Editor 1934 : Park and Palace Dept., Leningrad Soviet. Early in the life of the Soviet Union, this little guide was produced for English-speaking Intourist visitors to , and especially for the 30 kilometer trip by water to Peterhof. Text in this little book tells about life in the time of the Tsars, but is generous with the Soviet approach, noting that at Peterhof is now a town of rest for the workers of the . Photos show Mon Plaisir, Study and Chair of Peter I, Large Fountain Cascade and Palace,  front staircase, Chesma Hall, Peter's Hall, Picture Hall, Gothic Chapel, Railroad Carriages of Nicholas II, more. Dust jacket  features drawing of Fountains.  64 pp. 10.7 x 14.4 cm. Paper booklet with dustjacket, minor wear and chips on dustjacket, booklet very good. (8121) $35.00. Travel

Posev Ezhenedelnik Obschestvennoy I Politichestkoi Mysli (Weekly Social and Political Thought), with Zarubezhnoe Prllozhenoye (The Sowing, and anti-Bolshevik Journal,  with foreign supplement), Sunday, 27 December 1953. [In Russian]  1953 : Posev Izdatyels'stvo Posev (The sowing) was the journal of an anti-Bolshevik organization. "Military Attaché in Moscow-- Richard Hilton" tells story of his work in . Lead article in this issue: "Process of G. Mueller (N. Khorunzhego) is Completed"--On Friday 18 December the Frankfurt American Court completed the process of George Muller (N. Khorunzhego) and his wife Elizabeth Mueller, accused of Soviet Espionage. This report takes up nearly three pages of this issue. Bureau of KTsAV has asked to publish this letter to the Editor of the Washington Post that underlines the fact that American social opinion wholly approves of the Committee for Freeing from Bolshevism, etc. Letter, from , is signed by S.P. Mel'gunov, President of Bureau. Ads for forthcoming issue of "Mysl'" (Thought) from the Posev Press; Bust of A.S. Pushkin, price 16.50 Marks (20 kron.); ad for gift books for Christmas from Posev Press includes several by N. Gogol, one by N. Nekrasov, one by Tretyakov, one by Chekhov, and one by L. Tolstoi. "Sovietskie Prosoyuzi" (Soviet Tradeunions) by S. Kursanov.  "Za Slovesnoi Shirmoi" (Behind the Masked Words) --- "Besklassove Obschestvo" (Classless Society); "Diktatura Proteliariata"  (Dictatorship of the Proletariat); "Religia--Opium dlya Naroda" (Religion--opium for the people); "Akuli s Uoll-Streeta" (Sharks of Wall Street). 16 pp. 30 x 42 cm. Newspaper, small tear in fold, main section unopened, very good.(8079) $33.00. Cold War

Posted by The Personal Navigator at 1:13 PM