Both feet into the past….. 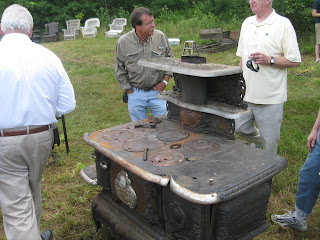 This old Walker & Pratt cook stove went for $100.  Women up here baked their biscuits in this oven in the early 1900s.  You can buy a refurbished stove like this for $4000.

At my age, I’m sure most younger people think I’m really anchored in the past, but Marty and I took a real trip back to an earlier, quieter time last weekend, and we only drove about 100 miles!
Hillsborough is a beautiful little town in south central , nestled high in the hills, near Pack Monadnock  and .
If you approach it from , or from , you enter a town that looks pretty much the same as in the 1940s.  There’s an old tenement, with about four floors of rooms for low-paid mill workers, perched right next to the .  Downtown is a string of businesses that look so untouched by time you start to think you are on a movie set.  Drive further, and you return to 2013, with modern service stations, Dunkin’ Donuts, and the rest.
We went to a country auction, held by a New Hampshire auction firm called Wigsten Associates, and it was really country.  No telephone or internet bids, no computers helping keep the tally of bids.
The auction was held on a farm on Bear Mountain, and to get there we drove on roads that got narrower and steeper as we got closer, with magnificent views of the countryside, and the elegant, green mountains.
We passed several beautiful farms, with contented-looking cows taking in the cool Sunday morning air. 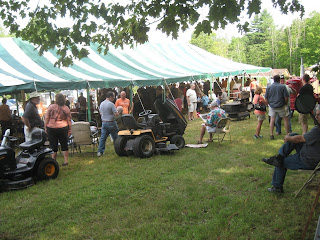 At the farm we could see the big striped tent that told us we had found the auction.  Everything on this farm will be sold shortly, including a very stately homestead, built in the late 17th century, but obviously very much up to date.
At the auction they were selling a Farmall tractor, several automobiles, all kinds of new and nearly new equipment like a hydraulic log splitter, and everything you need to overhaul a car, or a tractor.  There were about eight riding lawn-mowers, and a World War II era Jeep with license plates from Andrews Air Force Base in . There was a huge hose reel on wheels, just the thing to take to fires in the days before fire engines. 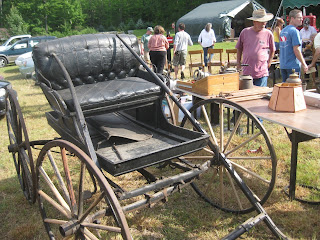 All this old buggy needs is a horse.

There was an old buggy, and the kind of sled you would have used to haul your ice-fishing gear across a frozen lake back in the 19th century.  There were 18th and 19th century farm tools and kitchen equipment, and there were neatly packaged large plastic bins filled with everything a packrat or a hoarder could imagine, including kitchen tiles, a roll of copper for flashing, drain pipes of every size, tools of all sorts, old pictures, boxes of letters from the 19th century, and a complete set of modern equipment from a professional photographic studio.
This auction brought loads of good old boys from the neighboring farms, eager to scoop up the tools, the tractors and whatever else. It brought antique automobile fans to look over the 1971 Ford LTD convertible or the Jeeps.  It brought antique dealers, like Marty, anxious to buy interesting items from a forgotten age, so hard to find these days.  And it brought other bargain hunters of all stripes and sizes.
An event like this draws a portion of people who look very much as if they had just come out of winter hibernation, including young men and women who seem to think that it is all right to eat until you’re bloated, and then cover all the extra skin with tattoos. 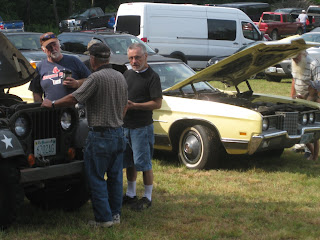 This 1971 Ford LTD convertible drew lots of lookers, but here only the man with the white beard is admiring that eight-cylinder 429-c.i.d. powerhouse.   Men at left are gathered around a relatively new military Jeep. 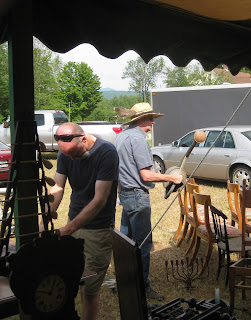 Man with feather in his hat is an antique dealer from . 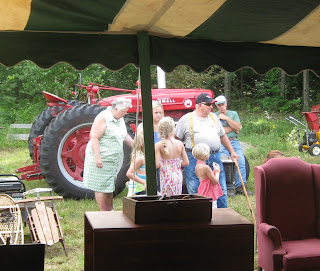 This family came to buy, and they did indeed.

The antiques that fascinated us were genuine, Made-in-the-USA goods:  Old 18th century candle stands, different pieces of equipment for cooking at an open hearth, a large brass trivet for keeping things warm near the open fireplace, loads of old snowshoes and sleds, 18th century hay rakes, a Victorian candle reflector, and much more.
Murray Wigsten heads this auction firm, based in nearby .  It was indeed fascinating to watch the teamwork of this all-family operation. 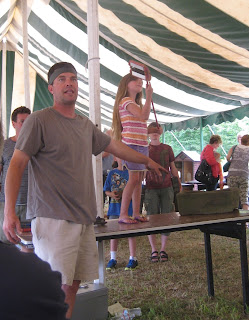 did most of the auctioneering, but his son stepped in (see photo above) to spell him, ably assisted by four children, including this sprite of a little girl, here showing bidders a toy vacuum cleaner.  All four kids did a tremendously energetic, enthusiastic and devoted job of helping show the goods and then delivered items to winning bidders.   One young boy, no older than 10 or 11, drove the riding lawn mowers, one after another, into position to sell, and he wasn’t joy riding—he was a serious worker.
Call me old-fashioned, but it was really fun to step back and spend a few hours in old .

Posted by The Personal Navigator at 6:42 PM