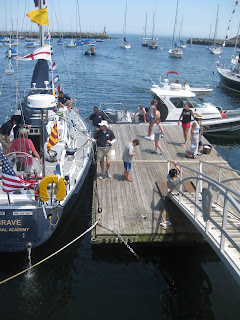 Three 42-ft. Yachts of the Naval Academy Sailing Squadron visited Rockport this past weekend, as did sailors from , and , and the town rolled out the welcome mat for them.
Roger Lesch, a retired local police officer, and Sharon Grandmaison, who runs a child care service, are the driving force behind the Rockport Navy Committee, which also includes people connected to the American Legion, local fishermen, the Sandy Bay Yacht Club, the Rockport Country Club, Navy veterans, friends of the Navy and old Naval Academy graduates who live here.
It is fascinating to see how Rockporters, and visitors, are attracted to these sharp young men and women sailors and Midshipmen.
While the Navy was in town, we took turns standing “watch” down on T Wharf where one of the boats was open for visitors.  Visitors to Rockport strolled down the wharf to look at all the boats, and we offered them a chance to visit the  yacht.
They’re usually eager to do it, and clamber down the gangplank and lift themselves on board.
The Rockport Navy Committee had a whole schedule for these 30 Midshipmen and their advisors, including volleyball and softball games, cookouts, a lobster feed, breakfasts at the and at Brackett's, and many local merchants and citizens helped offer Rockport's hospitality.
The Navy Committee has done this for visiting warship crews in recent years, as well. 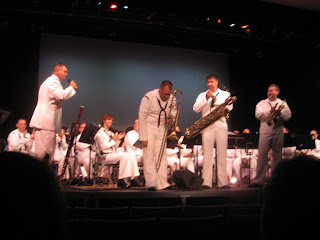 Roger and Sharon always do a spectacular job of organizing all the events of the Navy Weekend, and this means getting families to sign up to house the midshipmen and sailors, and organizing for feeding all these hungry young people, including a lot of lobsters.
This year the Northeast Regional Navy Pops Ensemble came, and Roger and Sharon set up to give them all a fine lobster dinner before they played.
The band with some 38 members, is a brilliantly professional organization, based at the in .  It amazed me how, on a hot summer day, these musicians appear in perfect, spotless and crisply ironed white uniforms. 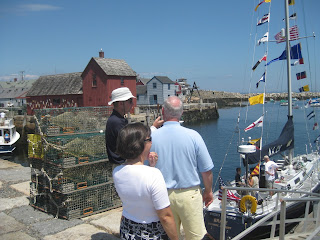 When I had my "watch" on T-Wharf last weekend, Advisor and Skipper Hight Spencer, an adult with more time under canvas than most naval officers, joined two of his  Midshipmen crewmen to show off their boat, and they showed off the cramped spaces for ten midshipmen aboard the boat, and usually there was a conversation about life at the Academy, and the Navy.
It’s interesting to talk with visitors to Rockport, and Rockporters, who stroll down and go aboard the Navy sailboats.  They come from all over the world. 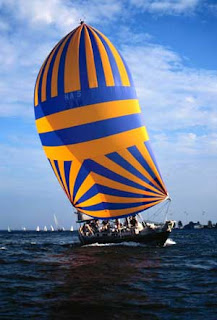 Summer cruises at the Academy have always been very serious training events, with a little time squeezed in for the Mids to see new lands and meet new people.
Midshipmen spend their first summer at the Academy learning about the Navy, and getting ready for four years of rigorous physical and academic life.  From the day that they are sworn in, their lives are a continuous whirlwind of marching drills, obstacle courses, trips to the rifle range, swimming tests, whaleboat rowing, academic work, running, hiking, sports, more marching, and lots of sweating.
The second summer is such a relief, because Plebe year, and all the harassment and questions and drilling and memorizing, sitting on an invisible stool at meals, and other forms of “character building” are done.  The year of academics is done, and it is time to go to sea.
Today, some Midshipmen spend part of that summer in these 42-foot sailboats, and they practice navigation, and learn the finer points of handling a real sailing craft for several weeks.  After that, they’ll fly to some base in the  or overseas, and embark in a submarine or surface warship for several weeks.
On that ship they’ll learn what enlisted men and women do that makes the ship operate and able to fight.  They’ll learn how to make torpedoes or missiles ready for firing, how to stand deck or diving station watches, how to inspect tanks, how to charge batteries on a submarine, how to fuel ship, how to navigate, and how to clean a head (crew’s toilets).  This cruise as sophomores or “Youngsters” is intended for them to get to see the Navy from the point of view of enlisted men and women.  The next times they go to sea they’ll be studying the role of officers.
That “Youngster Cruise” of 2013 is not much changed from the one we took aboard a battleship in 1954.  (At least, from my point of view!)
As soon as the graduating class had received their commissions and diplomas, we boarded troop transports from  down to , where we embarked in a summer training squadron.  My ship was USS New Jersey (BB62), a 45,000 ton behemoth, with nine big 16-inch guns.

As soon as we were aboard, we sailed out of  and rendezvoused with three other battleships.  The photo above shows that event, which was the last time those marvelous veterans of World War II ever sailed together.  Besides , there were the Battleships Iowa,  and .   bore a large nameplate that marked the location on her deck that had been the place for the signing of surrender documents by the Empire of Japan that marked the end of World War II.
When this historic event was over,  and , two cruisers, many destroyers, a small carrier, and some auxiliary ships, started our way across the .
All the way across we worked, and studied, stood watches, and worked at the jobs usually designed for enlisted men, like cleaning compartments and washrooms, painting, loading stores, assisting in taking on fuel, and much, much more.
The Jersey crew had just returned from duty off  in the Korean War, firing those big guns at North Korean targets.
In the evening there were movies topside on deck, and once on the cruise a “Smoker” when men gathered on the large teak deck aft, the fantail, to watch boxing matches between sailors, or between midshipmen.
Crew toilets in battleships resembled the bottom half of a large pipe, or trough. Sailors sat on toilet seats across this half pipe, and sea water flowed through the pipe, and then carried the waste overboard.  At busy times, there might be a dozen or more sailors all sitting on this half pipe.
At some time or other, a wise guy would take a wadded up newspaper and set it afire, and let it float in the halfpipe, upstream of the men sitting there.  You can imagine the surprise as the fire passed beneath the bottom of each man, and each popped up, in sequence. 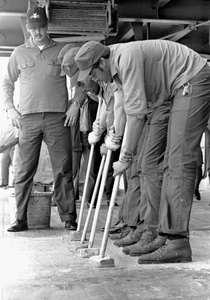 Each Saturday at sea was Field Day, with meticulous scrubbing from stem to stern, and midshipmen learned how to holystone.  This was a long-observed job of lining up sailors, barefoot, on the teak decks of the battleship and scrubbing those decks with soapy water until they shone.  The device for scrubbing was a mop handle stuck in the hole of a boiler fire brick.  In a row of Mids, we rubbed the brick back and forth on the deck, sliding and sloshing in the soapsuds, until a senior Chief Petty Officer decided the deck was sparkling clean.  Here’s a video of sailors holystoning the decks of USS Missouri:
http://www.youtube.com/watch?v=dktL8MdZWF8

After about two weeks of this life at sea, the ships arrived at their first liberty port, and ours was , on the northwest (Atlantic) coast of .
This part of , just nine years after World War II ended, was really poor. Many of the people who came to see our ship come alongside the pier and tie up were barefoot.
They were poor, but Spaniards showed the sailors and midshipmen aboard the battleship and other ships a marvelous welcome, with dancing in the streets, a street fair, and loads of booths selling all kinds of Spanish food and drink.  I recall a bottle of Spanish “champagne” sold for about one U.S. dollar.
We had tours of the town, and trips just a few miles north to the very picturesque and historical city of .

Our next port was , and there the battleship anchored out, and we took ferries to go ashore.  The liberty boats returning sailors and midshipmen to the battleship after an evening in the town could be interesting.
I grew up in a non-drinking home in Texas, and I had not really been exposed to people who routinely got very drunk and fought with each other, using fists, feet, knives and firearms to maim and kill each other.
Battleships were big in every way, and with a complement of 2000 officers and men, there were always a few troublemakers.
The  liberty boat was really a large ferry that could carry over 200 men, and one evening I was aboard along with a whole load of enlisted men and midshipmen, and some were really drunk.  One rather small, wiry sailor was incredibly drunk, and started picking fights and then picked a fight with a large sailor who was a Shore Patrolman.  The S.P. started to restrain the sailor, who then summoned up the superhuman power only available to drunks, and swung the huge shore patrolmen around the deck like a limp rag.  Then, more shore patrolmen showed up, and soon there must have been a dozen sailors wheeling around, trying to restrain this little drunken man. When they finally had him down, a hospital corpsman appeared and gave the man an injection of something to quiet him down.
I’ve seen spectacular drunks quite a few times in my thirty-four years in the Navy, but that was my introduction.
Ashore in Cherbourg, ten years after the D-Day Invasion there against bitter Nazi opposition, there were still signs of bomb and artillery damage, and graffiti about the then current war of French troops fighting at Dienbienphu, in French Indo-China.
After a wonderful trip to , we were all back aboard , and then sailed to , where we had a chance to fire those big 16-inch guns and experience life in boiler rooms when the temperature reaches 130 degrees F. or more.
[NOTE: This Blog first appeared in July, 2011.  It has been updated for this Navy visit.]

Posted by The Personal Navigator at 1:58 PM