To the Outer Banks 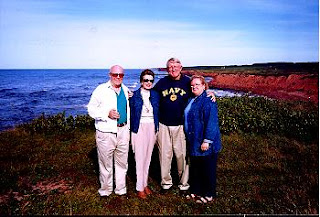 A while back we drove down to to join some old friends for a trip to their favorite destination, the Outer Banks of North Carolina.
We first met the Browns when he was an Army lieutenant colonel and I was celebrating my promotion to that same rank in the Navy, commander.  We were stationed in at the time. Paul drew on his armored cavalry experience in the U.S. Army as he advised the Iranian Ground Forces, and I operated from my background in submarines and destroyers to help advise the Iranian General Staff on long-range planning.
Advising Iranian officers on long-range planning was a bit of a problem, because the Shah had a habit of hearing someone brief him on what his forces could look like in five years, and he would say, “Right—let’s have that—NOW!”
Not even the best army in the world could build itself up that way.  The idea of long-range planning was to work out the kinds of people you wanted to enlist in the Army, the equipment you had to buy, the schools you had to build, and so on.  You did some things this year, some the next, and so on.  Even with all the oil money the Shah was receiving, you couldn't have sailors, airmen, planes, air strips, ships and ports instantly!
This was in 1972.  Little did the Shah know then that in seven years, he would be gone.

But back to Paul and Pat.  Patricia was a pretty brunette who had married Paul right after he graduated from in 1951.
Since we left we’ve gotten together with the Browns to visit a lot of places along the eastern seaboard of the .
Paul Brown was the son of an old Virginia Judge, and they lived on a part of the Judge’s old estate in .  The family homestead was reputed to have a Confederate soldier as a ghost clattering around in the upper floors, and since the home had been on the main road to and from , someone was always finding an old Confederate or Yankee bullet or belt buckle, or some other memento of the Civil War.

After a nice breakfast we departed in Paul Brown’s ten-year-old Ford Explorer, with four-wheel drive.  He had recently had the car detailed, and the engine cleaned, which somehow screwed up the ignition connection, so he had to use a screwdriver under the hood to jump start the car every time he wanted to get it running.

We stopped for lunch at a favorite place of the Browns’ in   I had some form of quesadilla which threatened to stay with me for a long time.  We drove past Norfolk and Virginia Beach and then into North Carolina, heading east to cross onto the Outer Banks north of Kitty Hawk.  We arrived at our destination, a hotel that made an attempt at Elizabethan décor, in .  Manteo, on , is the site of the Lost Colony.  Although it is still lost long after Sir Walter Raleigh left it to languish four centuries ago, the local folks seem to make it the center of their commercial enterprise. 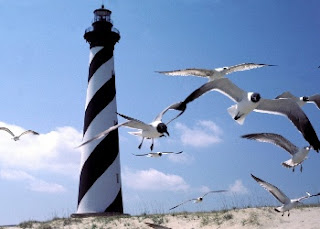 We left Manteo and drove to the Outer Banks and Ocracoke. We drove down along the string of islands in that form the barrier against the .  We arrived at , the ferry landing where we awaited our ferry that would take us across the inlet to Pamlico Sound, to .

Because of the problem with Paul’s car, he got out to jump start it, and when it started he had left it in gear and it started easing forward toward the end of the pier, with the three of us in it.  I fumbled for the gear shift, and was able to shift to neutral just before we (1) smashed the ticket taker’s booth, and (2) plunged into .
It took us a few moments to realize that three of us nearly drowned that day! 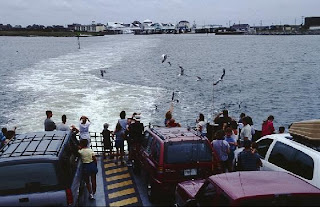 When we finally boarded the ferry at for Ocracoke, Paul was afraid the Explorer might not start again if he turned it off, so he wanted to let the engine run as the ferry chugged 40 minutes across Hatteras Inlet between islands.  The ferry personnel, who had seen how Paul had nearly killed them at the landing, were not about to let him do that.  They made him turn off the engine.
We managed to drive off the ferry without any more dramatics, and spent the night at the Castle Inn in Ocracoke. Then we drove to Hatteras and stayed at an inn near Hatteras Light. We drove onto the beach, which requires letting a lot of the air out of your tires, and then we tried a little fishing.  This was what Paul was anxious to show us— the beauty of the beach at Hatteras, on the North Carolina Outer Banks.  We stayed on the beach and watched the sun set.
We didn’t catch any fish.  However since we managed to keep from drowning at the ferry landing, we figured we had had a pretty good time. Somehow we managed to get the tires re-inflated.

Here are some books and papers for your consideration… 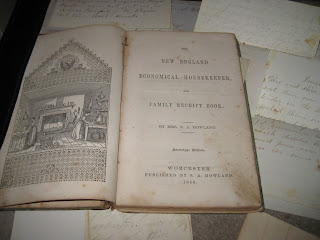 Family Companion, The; Containing Many Hundred Rare and Useful Receipts, on Every Branch of Domestic Economy; Second Edition by J.R. Wells,  M.D. 1846 Boston, MA: J.R. Wells, M.D. Recipes for making tea, coffee (with shavings of isinglass or dried fish-skin); how to boil a calf's head; cures for apoplexy, cancer (carrot poultice), ear ache (a roasted onion in the ear), dropsy, bleeding lungs (eat salt); tips on boiling molasses; Cheap paint for a barn; how to preserve potatoes till spring; how to destroy bed bugs, rats, mice; how to remove stains from Broadcloths; Directions for washing calicoes; To keep moths out of carpets, sprinkle tobacco or black pepper on the floor before you put the carpet down. 72 pp. 11.4 x 18.2 cm. Paper booklet binding carefully hand stitched, original blue paper cover replaced by a later cardboard cover, pages foxed, poor. (5981)  $27.00. Cooking/Medical 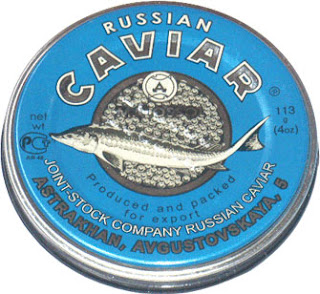 Elegant Extracts of Natural History; Collected and Revised frin a great variety of the most elegant and authentic writers in this Science, with a Preface on Education by Robert Heron. Volume 1 only. By Buffon, Thomas Jefferson, et al. 1792  : E. Balfour. 494 pp. 13.5 x 21.4 cm. This is an interesting and unique approach to explaining natural history, employing known authorities on various topics and engaging in a bantering family dialogue to teach astronomy. In the Section on the Human Species there is a 12 page discussion on the development of young Mozart, by Daines Barrington; a section on Dwarfs, Giants, and 20 pages on Slavery, by Clarkson. Also in the Human Species are segments on abstinence, sleep, hunger, and the Orang-outang. There is a section on Quadrupeds, which discusses, inter alia, Chamoy, the Goat, the Rein-deer, the Giraffe or Camelopard, Tygers, written by d'Obsonville, the Glutton, the Sloth and the Seal, Sea Lion by Buffon and Leming, by Goldsmith.  There are no illustrations. Calf on board, decorated spine, exterior hinges cracked, moderate wear overall, .5 cm. at toe of spine missing. Interior tight and clean. Contemporary inscription on title page  “John Ward". There are no illustrations. Very good.   (8322)  $65.00.   Scientific/Natural History

Cyclopædia of Wit and Humor, The; Containing choice and characteristic selections from the writings of the most eminent humorists of America, Ireland, Scotland, and England, Ilustrated with 24 portraits on steel, and many hundred wood engravings, 2 Volumes;  Burton, William E., Editor;  1858 New York, NY: D. Appleton & Co. 1136 pp. 17 x 25.5 cm. Here is a rich collection of the humor of English-speaking people up to its publishing date of 1858. Droll stories, poems, songs by American and Irish writers and speakers in Vol. I and Scottish and English writers and speakers in Vol. II. .  Beautifully illustrated with 24 steel engravings of notable humorists, all with tissue guards.  Two volumes, quarter leather with marbled boards, marbled page ends, five-ribbed spines with gilt titles. Minor rubbing to leather spines, altogether very good copies. ( 8330) $150.00.  Humor

Posted by The Personal Navigator at 6:40 PM