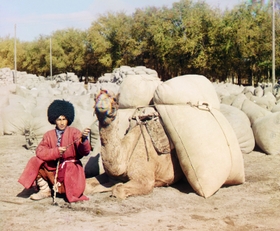 Turkoman man and camel
Ever since we arrived in , we had heard about this fabulous land of the Turkomans, up next to the border with the .  Every Thursday, which is Moslem “Saturday”, they held a huge bazaar up there.
One morning the whole family loaded into our station wagon and headed up into the mountains northeast of , drove up to the Caspian Sea and then headed east to the town of , an ancient city on the old .
We checked into a hotel and that night we enjoyed a wonderful Persian Kebab dinner.
This was the Turkoman area, and the Turkoman tribes move back and forth across the border with the Soviet Union – now with ease.    The next morning we drove north to the .
Pahlevi Dej was near the border with Soviet Turkmenistan.  The village was filled with low houses, kids and chickens running around, and no grass.  Just sand.  Yet, it was tremendously colorful in the way folks dressed. Very few in modern garb. All around us were Turkoman men, in their native dress—broad, black karakul hats, long black overcoats, and feet wrapped in bindings. Turkoman women dress very colorfully. Also there are Qazan men, with the Asian appearance, who wear a small white turban with black stripes and the women are brightly dressed, color on color, with large colored shawls.
We also saw Indian-looking people from Sistan or , and Pakistani-looking people wearing little bellboy hats. There were also Arabs wearing turbans with long tails down the back.  And Kurds with green turbans with little fringe on them.
The men drove large carts with wheels two meters in diameter.
I thought I was seeing a Russian historical movie.
Up here, girls don’t go to school. They learn early to weave rugs. And there are Turkoman rugs for sale everywhere. And  Baluchi and Bakhtiari rugs. 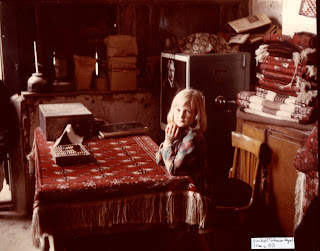 Daughter Susan in Turkoman Rug Shop;
Note photo of Shah on the safe behind her.
We visited a yurt, a traditional large, circular tent made with camel felt, sewn onto saplings or reeds stuck in the ground, bound at the top and covered with furs. At the center there is a hole for smoke and light. There was a samovar chugging away near the entrance.
We went to the horse bazaar.  No women were there, except for my wife Marty and daughter Susan, age 7.  The men all squatted around, looking thoughtful.  There were 20 to 30 camels for sale, as well as horses, donkeys and sheep. A donkey went for 1500 rials and a camel for 15,000 (about $70).
Twelve years later, when we were stationed in the , we visited a similar bazaar in (now Ashqabat), the capital of Soviet Turkmenistan, and saw the same scene:   the colorful dress, the carpets… with one difference.  One guy offered me some hashish.  In in 1971, with the Shah in charge, a Savak man would have arrested a drug dealer and there’d be a speedy trial and execution. As a diplomat, I’d be on my way out of the country. Today in they are just as serious about drug dealing. 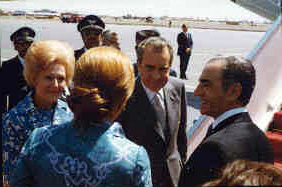 Shah and Queen Farah greet Mr. and Mrs. Nixon at Tehran
May 30-31, 1972: President Nixon visits the Shah on his way back from a trip to .  Nixon had not arrived yet that day, but car bombs were reported going off all over .
Today,  car bombs in the are an everyday occurrence, but in 1972, they were rare.
The chief U.S. Air Force advisor in , Brigadier General Harold Price, was being driven from his compound that morning when a bomb went off under his car.  He was hurt, as was his driver, but the only fatality was an Iranian woman who happened to be walking nearby when the explosion hit the car.
We all went to Mehrabad Airport to greet our President, and watched as the Shah, Queen Farah and his generals met Nixon and escorted him to an honor guard, and then they all traveled by a triumphant motorcade into the city.
The Shah had long admired Nixon, and Nixon wanted to keep the Shah as an ally, because with support, was taking over the role as “policeman” for the West in Southwest Asia and the area.  However, just at this time, the Shah was anxious to raise world oil prices, and Nixon wanted to keep oil prices down.
We didn’t know it at the time, but now we learn that Nixon considered getting rid of the Shah, but he was afraid that his replacement would be worse.
However, before he could push the Shah out, Nixon himself was out of office.  The Shah followed five years later.  It turns out, the Shah’s replacement, in the eyes of the West, was worse.
Here are some books and papers the Personal Navigator is offering:

Shah Mohammad Reza Pahlevi
Today, A Quarterly Review, Vol. I No. 1  published by the Department General of Information and Broadcasting, Tehran, Iran ca. 1956 : Dept. General of Information & Broadcasting. This magazine-format booklet features full-page photos of Shah Mohammad Reza Pahlevi and Queen Sorayya (Soraya). History of . Persian culture. Zoor Khaneh. Olympic Success in 1948 games. Woman of , photo of Queen in fur coat, inspecting women at evening class. Photos of visits by Iskandar Mirza of , Sokarno of , Conrad Adenauer of and Camille Chamoun, of . Radio broadcast schedule. 48 pp.  21 x 29 cm. Paper booklet, very good. (7760)  24.00. Cold War/History
Pakistan Times, The: Largest Circulation of any English Language Daily in Pakistan; Lahore, Saturday, March 22, 1958 (Ramazan-ul-Mubarak 1377 A.H.) 1958   , : The Pakistan Times. " Budget Passed"  Five more members of the Muslim League crossed over to the Republican side on Friday. "E. Wing Govt. Crisis" news from that 11 members of the Awami League Coalition Parliamentary Party  have withdrawn support from the Government.  AFP reports from that more than 200 Iraqi army officers have been arrested following an attempt to execute a coup d'etat in . Ramazan moon has been sighted in and . Tomorrow the will celebrate the second anniversary of its birth.  Festivities have been planned  on an elaborate scale all over the country. Photo of Pakistani flag being raised on stern of PNS Jahangir, formerly destroyer HMS Crispin, in ceremony at . Photo of Princess Birgitta of , in gymnastics uniform, rehearsing for yearly exhibition in .  paper reports new pact by , and , says initial move was by Pak Prime Minister, Malik Firoz Khan Noon. 8 pp.  44 x 60 cm. Newspaper, 2 cm closed tear in front page,  good. (7928) $22.00. History/Cold War Era
Plymouth Pulpit: A Weekly Publication of Sermons preached by Henry Ward Beecher, Saturday, July 4, 1874; Vol. 2 No. 15 New York, NY: J.B. Ford & Co. Subject: The Immortality of Good Work. Beecher: "It is blessed to live; but it will be yet more blessed, having lived well, to die-- and for this reason: that our works follow us." 'Indeed, after Christ died he lived more efficaciously than when he was alive." "blessed are the dead; they rest from care and sorrow, and their work goes on and follows them." 24 pp. 14 x 19.7 cm. Paper booklet, very good. Includes small leaflet with poem: "My Times Are in Thy Hand." (5908) $15.00. Religious
1968 Peace Calendar & Appointment Book; Out of the War Shadow, an Anthology of Current Poetry Levertov, Denise, Compiler/Editor 1967 New York, NY: War Resisters League, 5 Beekman Street, NYC. Collection of poems by living (in 1967)  American and Canadian poets, written in the context of "longing for peace", "we are living at war." Poems by Galway Kinnell, Hayden Carruth, Barbara Gibson, Barbara Deming, Lewis Turco, Muriel Rukeyser, Sister Mary Norbert Körte, O.P., James Laughlin, William Lee Coakley, Dick Lourie, Gary Snyder, Harriet Zinnes, Gilbert Sorrentino, Allen Grossman, W.R. Moses, Gary Youree, Eileen Egan, William Burford, Emmett Jarrett, Vern Rutsala, Gail Dusenbery, Louis Zukofsky, many more. 62 pp. 13 x 20.7 cm. Paper booklet with spiral binding, heavy card cover, pages numbered in pen, good. (7996) $35.00. Cold War/Poetry
Berlin, 27. Februar 1969 "Ha, Ho, He -- Nixon is okay!" Booklet issued in commemoration of visit of President Nixon to Berlin text by Waldmann, Helmut 1969 Berlin, Germany: Presse- und informationsamt des Landes Berlin. Cover features color photo of President Nixon standing in open limousine in motorcade through Berlin, while Berliners wave. Introduction to text by Bürgermeister Klaus Schütz. Photos of arrival, visits to Charlottenburg Palace and Siemens Factory, photos of departure. Statement by Nixon, upon return to Washington: "If you could have been with me as  rode through the streets of Berlin on a snowy cold day and have seen the hopeful faces in those crowds on the streets....you (the American people) would have been proud that America did meet her world responsibilities in helping others defend their freedom." 64 pp. 19 x 20 cm. Paper booklet, very good. (7770) $21.00. Cold War/History

Contact me at scoulbourn1@verizon.net
Posted by The Personal Navigator at 6:42 AM