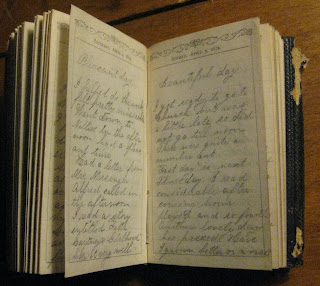 Pages in Hattie’s 1874 Diary
Women and men might enjoy looking into the life of a young girl living in in 1874.  She is the most hopeful, optimistic and positive person you may ever meet.
Hattie Weston tells about her daily life with her mother, older brother Edward, and young brother Ned. In a diary covering one year of her life she completes her schooling and begins to teach her own scholars.
There’s plenty of work for a woman in the home in 1874. She helps her mother with washing, and then ironing, and cleaning of the house. She writes that doughnuts she made were quite tough, but the biscuits were good.
She attends meetings of the “Good Templars”, a temperance organization, and plays the organ, attends prayer services, and Sunday meeting.
One time she writes about attending a meeting, enjoying the sermon, but confesses that “my thoughts were wayward.”
For me, reading about the regular events in the life of this young woman makes her come back to life.
In the nineteenth century in America Christmas was a tiny event compared to today.  It’s always interesting to me to see just how they did, or didn’t celebrate it. It was always very, very low key.
And they invariably write about people dying.  Many of their relatives and friends died young, and you get to share in their thoughts about life and death.  Also, there’s plenty of the fun that they have—going for sleigh rides on a snowy night, picking blueberries, going to the meeting house to watch lantern slides, watching as President Grant comes to town.  Or President Taft.
For me, it’s fascinating, and I hope you get a chance to share that!
In one diary I read a while ago, I felt like I was along on this young man’s adventure, as he left his home in in 1862 and soon found himself fighting Confederate troops in Port Hudson, Louisiana.
He mustered on Boston Common with other volunteers, getting ready to catch the troop train to the south.  Riding with other young men, all fresh green recruits, they disembark in , and suddenly they’re attacked by mobs of pro-slavery men.
They get past that, then board a troop ship that takes them down Chesapeake Bay, out into the Atlantic, down around and into the .  Each night, at least one soldier dies, from disease or sickness.  There’s a quiet burial at sea.  Finally, they reach the Mississippi Delta and start steaming up the river, heading for their first encounter with Rebel forces. 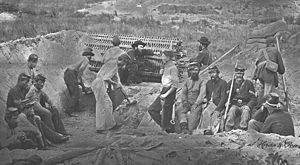 Civil War:  Union troops dig trenches at Port on the
After months at Port Hudson, his ship made it up to , and he was discharged from the Army, while the War raged on.  He described , with gangs of tough Irishmen who would kill you for the price of a gallon of whiskey, which was one dollar.
Each time you pick up one of these handwritten records of days long past, you have a chance to look in on a life in a fascinating time in ’s history, and read a personal account of how one person experienced it.
This is not a slick piece of historical writing, not a scholarly work or a novel, but a piece of a real life being lived.
Then, there’s the life of C.W. Wheeler…. C.W. Wheeler is a farmer in northern when he keeps this 1875 Diary.  He wastes no words with idle musing, because he has an exhausting life of hauling wood, manure, straw, hay and more manure, planting crops, milking cows, raising hogs, breaking out (making roads passable after a snowstorm) roads, churning, thrashing, building fences, chopping ensilage, cleaning out stalls, building fences, cutting ice in cakes in the Black River, and accompanying the hearse to a few funerals. What does he do on Thanksgiving Day? He's breaking out roads.
The stories in these diaries and journals give a fascinating picture of a life in another time, with people visiting friends, and undergoing hard times and having fun, churning butter, playing the organ, dodging drunks in or cutting ice out of a frozen river.  No telephones, no cars, no cell phones, no television.  How did they exist?
Here are a few diaries the Personal Navigator offers:
Hattie's 1874 Diary (Handwritten)   1874    : Handwritten diary. ~400 pp. 6.5 x 10 cm.         Hattie Weston is a young girl living in in , and she is the most hopeful, optimistic, positive girl you will hope to encounter.  She writes about her daily life with Mother, Edward, younger brother Ned, her work in the house, her teaching scholars, and attending the "Good Templars", Temperance organization. She goes shopping in Peterboro. She plays the organ, and attends prayer services and Meeting. Last entry is Sunday, Oct. 25, 1874, when she writes that she went to meeting, enjoyed the sermon, but confesses that "my thoughts were wayward." This little diary gives reader a marvelous insight into a young woman's life in the last half of the Nineteenth Century Standard diary with almanac material, postage rates, currency, weights and measures, etc. printed in front. Pencil and ink entries for 60% of book, remainder blank. Mentions friends Lettie Goodhue, Ida Johnson. Leather diary, standard 19th century type, spine and leather closure flap badly suffering from biopredation, text block very good.      (8124) $48.00. American Originals/Ephemera 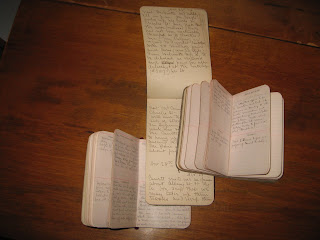 Eliot Clarke's Diaries -- The Building of the Boston Sewer System
Three personal handwritten  diaries (1879-1881)  in the life of Eliot C. Clarke, Principal Assistant Engineer for Improved Sewerage, the man who built the Boston Sewer System 1878-1881 , : City of .  The man responsible for building and maintaining 's sewer system in the years after the Civil War kept these handwritten diaries of his work from Sep. 7, 1878 to Dec. 19, 1881.  Clarke was a prominent figure in Public Health and Civil Engineering in those days, and his work was interconnected not only with building, maintaining and expanding Boston's storm drain and sewer system, but the many railroads and horse railways criss-crossing the city, as well as streets and the system of collecting slops, house trash and ashes from residences and businesses all over the city, and collecting and disposing of dead animals daily.  Clarke gave papers at national Public Health forums, and wrote a mountain of documentation on 's sewer system, covering sewer design, interconnections, manholes, pumps, and sewage through pipes that could backflood during high tides, causing noxious gases to back up in cellars across the city. He found a solution in intercepting sewer systems, and described this in a presentation at Massachusetts Institute of Technology in 1879, and later in a book published in 1885. His diaries record daily encounters with his fellow administrators and engineers, foremen, developers, builders, politicians and the public.  His writing is organized, literate and complete. 7.3 x 12 cm. Three small booklets one 9.7 x 15 cm, pages nearly all filled; two 7.5 x 12 Standard 19th c. diaries, gilt edged pages, very good. In 1880 one-third of pages are filled out, in 1881, one-half are filled out. All very good. (8111) $480.00. American Originals/Engineering

Travel Diary of Mrs. Harry Worcester, 1954 handwritten by Worcester, Mrs. Harry 1954. West Swanzey, NH: ephemera 28 pp. 10 x 16 cm. Leather "Travels Abroad" Diary: Mrs. Harry Worcester records trip she and husband took from Keene, NH to NYC, thence from Idlewild Airport via KLM Lockheed Constellation first to Gander, Nfld, then to London, then to Brighton by train; Banquet at Strand Hotel; met Mayor Dudley; back to London, tour, then by train to York, touring, visit The Shambles, on to Edinburgh; touring Scotland, then to Glasgow and steamer to Belfast, N. Ireland; train to Dublin; Dun Laoghaire then steamer to Holyhead, and train for  Caernarvon, Wales; Criccieth to Bristol, then London; flight to Chaumont, France; Harry visited places where he trained during World War I; Neuf Chateau, Verdun; Paris, Chalons-sur-Marne; sleeper train to Basel, CH, then Lucerne, Zurich, then another sleeper for Calais; rough crossing to Folkestone, then to London; flight home on KLM Connie to Shannon, Gander and Idlewild.  Green leather Travel Diary (only 28 pages of entries) with unused pencil in loop, very good. (7644) $30.00. American Originals/Travel/Ephemera 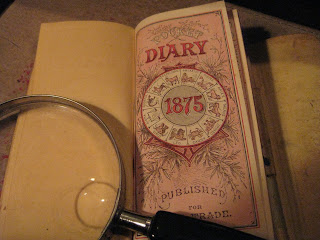 Diary of a Farmer in Northern Vermont
Wheeler’s 1875 Diary.  Handwritten. N. : ephemera. Mr. Wheeler lives on farm in North Craftsbury, VT in the part of the state.  This diary is a record of his work and it makes one weary to imagine breaking out roads full of snow in winter, which lasts long in northern . He's hauling logs, manure, freight, straw, hay, and more manure.  He's cutting firewood, and harvesting corn, wheat, digging potatoes, butchering hogs, milking cows, making butter, and sugaring.  He notes weight of sugar he "sugars off" each day in spring. In between he uses his wagon to accompany hearse at funerals. He cuts cakes of ice from the and hauls that away, and he builds fences, cleans manure from stable, and chops ensilage. On Thanksgiving Day he has to break out roads, and on Christmas Day it is work as usual.  Diary has usual almanac data, time differences, interest table, value of gold and silver coins, dates of festivals, postage rates, 1875 eclipses. ~160 pp. 7 x 15 cm
Standard 1875 diary, white cloth with foldover cover, staining on spine, good. (8133) $42.00.  American Originals/Ephemera

Conctact me at scoulbourn1@verizon.net
Posted by The Personal Navigator at 3:27 PM