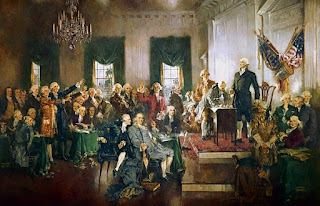 Visiting the Founding Era of America
Program for Wednesday, February 27, 2019

Wednesday, February 27, 2019: Visiting the Founding Era of America.  Looking at the events that led up to the American Colonists’ rebellion against Great Britain, and the work of our Founding Fathers to create a nation.  Read any book about those days when Minutemen at Concord and Lexington fired the first shots of the Revolution at British Redcoats, then chased them back to Boston…. the days when the Founding Fathers labored over the Declaration of Independence. Or, read about the U.S. Constitution brought together, in one remarkable document, ideas from many people and several existing documents, including the Articles of Confederation and Declaration of Independence. Those who made significant intellectual contributions to the Constitution are called the "Founding Fathers" of our country. These include George Washington, James Madison, Thomas Jefferson, John Adams, Thomas Paine and Patrick Henry. Rockport Public Library will schedule a special moderated discussion focused upon The Declaration of Independence, featuring a noted historian and scholar, on Sunday, February 24 or in case of snow, March 3. [Suggested by Christiann Guibeau] 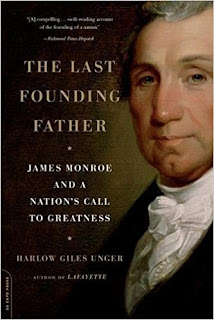 The idea you may get of “The Founding Fathers” is of a small group of really bright, dedicated men, mostly quite well off.  George Washington had a large farm and quite a few slaves. He was a well-educated Virginia gentleman, married to a fine lady.  When he spoke, people listened.  He took over the job of Commander of the Continental Army, and led it through some horrible times, but finally won the American Revolution. When these men gathered in Philadelphia that summer of 1787 to figure out what to do with the Articles of Confederation,
Washington occupied a chair at a table just a little elevated from everyone.  It just seemed the natural thing for him to become our first President.

James Monroe was born in 1758 in Westmoreland County, Virginia. His father had little education, but his mother came from a family with education and refinement.  Monroe was no Virginia planter, like Washington, Jefferson, and Madison. However, he was a scrambler. He learned quickly, and he had a knack for making good friends. His mother had a brother who was wealthy, and at many stages in young James’ life, his uncle bailed him out, with money here, a house there.

When he was 16, young James was able to enter William & Mary College in Williamsburg, VA, the right place for a Virginian to get started.  After two years he left, as the colony had joined the other 12 to declare war against Great Britain, and James joined the army, and while he was mighty young, he took the rank of Lieutenant in the Third Virginia. He fought at Harlem Heights, was wounded at Trenton, got promoted to Captain and fought at Brandywine; made Major, fought at Valley Forge and Monmouth. Along the way he got to know General Washington and established a reputation for intelligence and honesty. Then he left the army while the war was still going on, and returned to William & Mary and studied law and got to know the governor of Virginia, Thomas Jefferson.

When Monroe was 28 and a Virginia Congressman working in the Congress in New York, he met Elizabeth Kortright, age 18,  of New York. Her family was well-off, and she was educated, cultured, socially connected and beautiful. They loved each other and were soon married.

Soon the young couple moved to Fredericksburg, where conveniently Monroe’s uncle had obtained a house for them to occupy while Monroe began a law practice, so he could earn some money. Money was hard to come by. Soldiers were paid in grants to land “out west”, meaning beyond the Blue Ridge Mountains, but these were only good if you decided to pack up and head out there to stake your claim.  Many did that, and others, those few who had real pounds and shillings, bought up those claims very cheaply, so that some people were able to acquire many thousands of acres in Ohio and elsewhere.
Next, President Washington appointed Monroe to be our ambassador to France. Elizabeth Monroe loved that idea, and she and daughter Eliza accompanied Monroe on the month-long Atlantic crossing, and then arrived at LeHavre, France. They landed just in time  to experience the French Revolution with carts rumbling through the streets, carrying many thousands off to prison and to the guillotine. However, both adult Monroes, who spoke French, jumped in with enthusiasm. Monroe was expected to humbly present his credentials to the five members of the Directoire, but instead he asked to address the Citizens’ Assembly, and when he greeted the men of the New Republic from the American Republic, he was wildly applauded.

Monroe had fought with the Marquis de Lafayette, a hero of our Revolution. Now Lafayette was outside of France, but his wife had been in prison for months, and the Monroes wanted to free her. Elizabeth had the ambassadorial coach, an elaborate vehicle in a France that had suddenly become slovenly and trashy after the Revolution, take her to the prison.  She marched in, and somehow arranged for the lady to come home with her. Later Monroe had an American passport prepared and they got her out of the country.

Life in Paris wasn’t just dinners and soirees. Washington directed that America remain neutral and not align with Great Britain, our former enemy but now our best trading partner, nor with France, our steady ally during our Revolutionary war. Antifederalist and Federalist Senators and Cabinet members made life hard for Monroe, and finally he was removed in a trumped-up “disgrace”. This was the work of Federalist John Adams, the Vice President, with collusion by two Secretaries of State.

A few years later, after serving as Governor of Virginia, President Thomas Jefferson sent Monroe back to France to handle a tangled diplomatic problem that would result in the 1803 Louisiana Purchase. The Mississippi River was becoming tremendously attractive to all the settlers who had started farms in what were the western states and territories, and sought to send agricultural products, lumber, cattle, and furs to New Orleans for loading aboard ships for overseas markets.

As Monroe, Elizabeth and two daughters got ready to sail to Europe, once again James turned to his uncle for money to educate and care for errant brothers and nephews and fill in for very slow payments for Monroe’s government service.

The author describes Monroe’s first conversation with the new French leader, Napoleon Bonaparte, and the amazing vagueness of just what it was we were trying to buy. Monroe had orders from President Jefferson to offer no more than $9 million, at first for New Orleans alone, but then it became millions of acres but he didn’t know if that included the western part of Spanish Florida, and the western boundary of Louisiana territory was sketchy.

When Monroe returned from France, he settled in a farm he had built near Monticello, the home of his friend, mentor and sponsor, Jefferson. Once again, he would do some legal work to bring in some income for the family, then serve again as Governor of Virginia, then, as America went to war with Great Britain again in what northerners called “Mr. Madison’s War” the President named him Secretary of State. Off he went to Washington City, in 1812.  Soon he was named to serve also as Secretary of War.

When the British marched into Washington and began to burn the still-under-construction Capitol and the President's Mansion, Madison was overwhelmed and impotent. As the Redcoats approached the city from the north, a scraggly group of defenders turned and ran. Madison's acting Secretary of War and hero of the Revolution, Monroe, took charge and gathered volunteers to push back the Redcoats.
In 1816 Monroe was elected to the job for which had been groomed all his life, President. No president had served more years as soldier, colony and state assemblyman, Congressman, Senator, Governor, Ambassador, Secretary of State and War. In 1820 he was re-elected without opposition. In the seventh year of his presidency he gave the speech which became The Monroe Doctrine, warning European nations that any future attempts to capture colonies in the Americas would be met with American opposition.
Monroe died on July 4, 1831 at the age of 72. 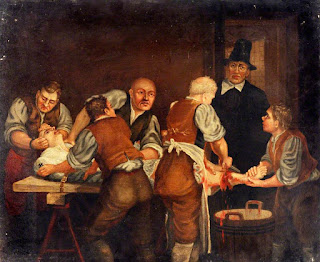 Wednesday, May 29, 2019: Progressive America in the first two decades of the Twentieth Century: Teddy Roosevelt and the Robber Barons; Woodrow Wilson and World War I.

Wednesday, July 31, 2019: The Crusades—what caused them? The Seljuk Turks; Pisa, Genoa, Venice and Amalfi; Byzantium and Jerusalem; The Children’s Crusade; Attacking the Jews in Germany; The Popes and Kings; Saladin and Richard I of the Lion Heart; how the Christians massacred Moslems and Jews and made Moslems intolerant. 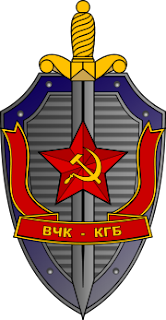 Wednesday, October 30, 2019: Charismatic leaders in History. What were the keys to Hitler’s, Churchill's, Mussolini's, FDR's successes? Keen perception of public moods? Oratory abilities? Character, firm ideology? Connecting to the people? How did they deploy their charisma? How could Napoleon manipulate the masses without TV ads? Why were people so perceptive to a madman in Germany? Recurring questions.  [Proposed by Janos Posfai]
Wednesday, November 13, 2019 [Two weeks earlier because of Thanksgiving and another conflict] History of Farming in America.  Examine the American Indians and their farming techniques, the early colonists and the skills they brought from their home countries;  the food discoveries in the New World; Tobacco and Cotton and slavery; Farming and the Dust Bowl; Government and Agriculture; Modern Agribusiness.  [Proposed by Sam Coulbourn]
NO MEETING IN DECEMBER

Posted by The Personal Navigator at 8:00 AM