World War  I in the Part II 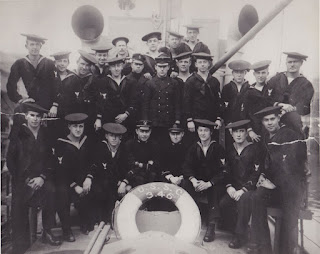 Photo of crew of Subchaser 346

Most Americans think of World War I as a battle of soldiers in trenches across , but in the battle was raging also.  The “Otranto Barrage” was a sea barrier set up by the allies to prevent German and Austro-Hungarian submarines from leaving the Adriatic and entering the .
An earlier blog, Part I, posted on May 29, 2012, described the personal adventures of some young Americans in this strange, far-off and little-known part of World War I. I got curious and started looking for more on this part of the Great War.  Sources are cited below. 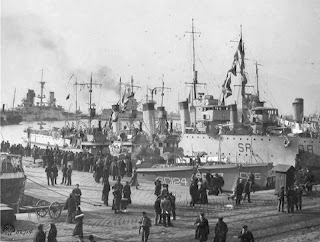 We offer these glimpses into the lives of earlier Americans: 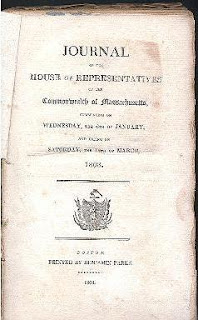 Journal of the House of Representatives of the Commonwealth of Massachusetts, Wed. the 6th of January to Sat. the 12th of March, 1808 Perez Morton,  Speaker of the House. , : . Activities of the House in session in the Statehouse in . Jan. 8, 1808: Speech of Gov. James Sullivan discusses Commonwealth militia, convulsions in that result in embargoes, and threat of seizure of our ships; regulations for inspection of pickled fish; negotiations with the Penobscot Indians. Report on bill for creation of a Supreme Judicial Court for the Commonwealth, Jan. 16, 1808; Much discussion of activities in the District of Maine, (which later became a State);  Petition by distressed seamen, with discussion as to how it was fraudulently prepared. Discussion on sale of lottery tickets in . Resolution supporting Government of the United States with regard to action opposing violation of neutrality, and outrageous attack on the American frigate Chesapeake. Message from Governor about coastal defense of the Commonwealth. Much discussion on the memorial of Micajah Coffin, a member of the House from . Discussion on different degrees of homicide, report by House committee. An act for regulating of the Indian Mulatto and Negro proprietors and inhabitants of the plantation called Mashpee. Bill to cede a piece of land in to the for the purpose of fortification.  324 pp. 15 x 26 cm. Paper on board, spine poor, cover stained, front cover detached, text block very good, (2 x 3 cm piece torn from corner of pp. 151-2.) Some pages unopened. Overall, poor. (5227) $70.00. History.

Lynn, MA;  Proceedings in Lynn, Massachusetts, June 17, 1879 Being the 250th Anniversary of the Settlement, embracing the Oration, by Cyrus M. Tracy by Newhall, James R.1880 : Lynn City Council. This is an account of the Celebration of the 250th Anniversary of the Settlement of Lynn, MA.  This "Third " of was settled on about June 17, 1629. The day of the Celebration opened bright and beautiful, with a parade of the "Antiques and Horribles", which “pursued their vagrant march, with rather rasping attire, through the principal streets... To a certain class, and that by no means a small one, this afforded great attraction." A list of the notables and organizations in the procession is provided. Exercises at Music Hall began after the procession terminated, soon after mid-day.  The Lynn Choral Union sang the National Hymn, "To Thee, O Country". Cyrus M. Tracy, Historian, delivered an oration which detailed the history of .  Next came a banquet of roast turkey, chicken, beef and pig, and boiled salmon with peas, many cakes, puddings and ice creams and sherbets. No intoxicating liquors were provided.  Part Second of this volume relates the history of , and provides brief accounts of the Mayors of Lynn, together with facsimiles of their signatures.  It repeats this for 's Town Clerks, then lists the current Aldermen and Common Council members.  Book concludes with a Chronological Table and an Index. Also inserted in book are five newspaper clippings relating to history of , from about 1956. . 224 pp. 15 x 23 cm. Leather on board with gilt trim, leather on spine worn and bottom 5 cm. is torn, inside back hinge is cracked. Marbled endpapers. Owner's name sticker on inside front pastedown: "Paul T. Curtin".  Fair. (1868) $85.00. History

Outlook, The, April 16, 1910 by Roosevelt, Theodore 1910 : The Outlook Company. "Mr. Roosevelt at Khartum" four pages of photos of Teddy Roosevelt's visit to the . Speech, "Peace and Justice in the Sudan" includes these words: "I wish I could make every member of a Christian church feel that  just in so far as he spends his time in quarreling with other Christians of other churches he is helping to discredit Christianity in the eyes of the world....Not only does what I am about to say apply to the behavior of Christians toward one another, but of all Christians toward their non-Christian brethren, toward their fellow-citizens of another creed.... I want to see each Christian cultivate the manly virtues."    "After the Verdict" by Isabel C. Barrows: world outside of drew a long breath when the message came that Nikolai Tchaikovsky was acquitted. "The Outlook" and Mrs. Barrows had a long involvement in this trial.  "Hadje Mohmed of " by Albert Edwards.  Negro Suffrage in another attempt to deprive the negro of suffrage. A Socialist Victory in --Emil Seidel elected mayor. 45 pp. + adv. 17.5 x 25 cm. Periodical, cover has small chips in edges. (7790) $23.00. History

Providence, RI: Two Hundred and Fiftieth Anniversary, Settlement of Providence 1636-1886   June 23 and 24, 1886 1887 Providence, RI: Providence City Council.  What a grand celebration it was!  Mayor Thomas A. Doyle, Rhode Island Gov. Elisha H. Rhodes and many other dignitaries were there, as bands blared, and military units and policemen, firemen, and school children marched; tradesmen drove decorated wagons with their wares displayed, in two separate parades.  There were speeches on Roger Williams and the history of (all contained in this book), and much music, composed especially for this event, also contained in this handsome book.  236 pp. 23.5 x 29.5 cm. Dark brown cloth on board with gilt decoration, edges slightly frayed. Frontispiece engraving and tissue guard are loose, but this is nonetheless a handsome copy. Very good. (1835) $58.00. History/Providence

Railroad Jubilee; an Account of the Celebration commemorative of the opening of Railroad Communication between and , September 17-19, 1851 publ. 1852, , : . Report of grand tour to the Two Canadas by delegation from , wined and dined at every stop, with free rail travel by the railroads. First, to Lord Elgin in Toronto, and then to Montreal and Quebec; Then the Jubilee in Boston, a huge parade through the city, speeches by Lord Elgin and other dignitaries; comments on Boston, reports of Railway companies. Railroad. Rail. Sea Transportation. 288 pp. 14 x 24 cm. Leather on board with gilt lettering and City seal front and back, five-ribbed spine. Gilt-edged pages. Text mentions map of harbor and rail termini, but there is none present. Edges scuffed and worn. Very good. (4111) $50.00. History.

Posted by The Personal Navigator at 11:05 AM