A Lot of Snow in Leningrad! 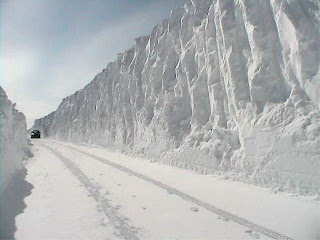 Our wives were full partners in the business of collecting intelligence in the .
It so happens that women, perhaps because in their younger years there may be many male eyes tracking them, get to be incredibly expert at detecting those eyes.  In the , when we were always liable to being followed by the KGB, our wives could detect surveillance much better than men could.
We took the Midnight Red Arrow train from  to , arriving on schedule at 8:25 a.m. A driver met us at the train station and drove us to the American Consulate, where we stowed our bags and jumped into our car, all set for a day of work.
We did a lot of driving around places where the Soviets were building new ships and patrol craft in .  Usually two attachés traveled together, but sometimes it was just an attaché and wife, and on this occasion, it was Marty and me.
I had to observe the construction of a new missile boat the Soviets were building on the banks of the .  The U.S. Navy wanted to know more about this project.  In order for me to observe fully, I asked Marty to drive our four-wheel drive Niva (a Soviet Jeep-style vehicle). 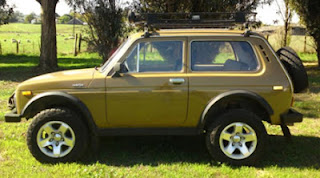 The cars we used in the were usually bugged by the KGB, so we knew that anything we said in them would be picked up, so we used hand signals and wrote little notes, or got out and took a walk, away from the vehicle.
On this day, there was a huge amount of snow everywhere in , and I asked Marty to drive down this plowed path to the river, with snow on each side much taller than our car, like the illustration above.
She drove us, but as we got near the target, out stepped a KGB “goon”.  He was in a position to stop us and submit us to some nasty interrogation.  So, I told Marty, “Quick, back up, as fast as you can!”
If you have not practiced high speed backing, traveling down a snowy track with snow piled high on each side, it’s not easy.
But, Marty kicked the Niva into reverse and away we went, backing down maybe 100 or so yards, and then cleared the area.
Marty was not happy with me for getting her into that situation! 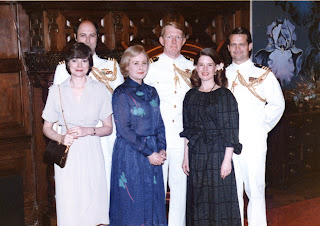 Women’s Day in —Fats took the day off!
One of our favorite walks was along the   at Schmidt’s Bank, in .  Here hundreds of boats and often warships and submarines tied up.  Many of the smaller, lighter draft boats were awaiting a schedule to move up the canals that cut across . Here we could see these boats and ships, and Red Fleet ships, and also ships under construction in the many shipyards of .
Whenever we would take these walks, we tried to take along our cameras and collect photos of interesting things.  Photography in this area was forbidden, however.
The KGB assigned an elderly “goon” that attachés named “Fats.”  He and some of his associates generally were around to follow us wherever we walked, or drove, and to make our job harder, or impossible.  They wore the red armbands of “Druzhniki,” or “concerned citizens.”  Sort of like elderly volunteers who operate as school crossing guards, except these were assigned to look after the foreign “spies.”  The Soviets considered all foreign diplomats spies—they hadn’t changed their attitude toward foreigners in centuries. 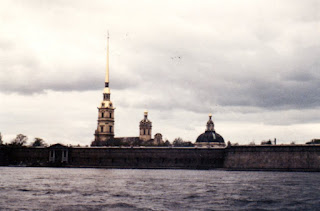 Peter and Paul Fortress, from across the

One day, March the 8th, 1983 to be exact, it was International Women’s Day. Now, in fact, the Soviets didn’t care much about women’s rights, except the right of old women to stand in the street all day long in the winter, smashing ice with a heavy iron rod.
But this day, as we arrived to do our job of collecting intelligence in , there was NO KGB.  They had the day off!
I was traveling with my assistant, Pierce Crabtree, a big, burly former Navy football player. With no KGB to bother us, we went wild photographing shipyards and ships and everything we could see.  We were driving a Soviet “Niva.”  4 x 4 vehicle. We thought this would be a great day to check out some radar installations near the Czars’ summer palace at Petrodvorets.  However, somewhere between Kipen’ and Ropsha, we got stuck in the snow.
If the KGB had been around, we would not have been able to get that far.  Now, free to travel, we had gone and gotten ourselves in trouble.  The snow was pretty deep.
Fortunately, along came a bus full of Russians.  The driver and some of the passengers got out and helped push us out of the snowbank.
The KGB would NOT have helped us out of the snowbank, but these Russians were like good neighbors anywhere in the world.

Now the Personal Navigator offers these books and papers: 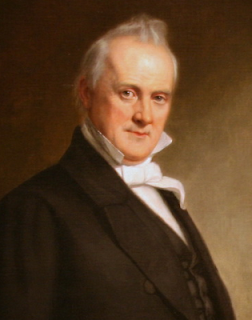 Statesman, , Saturday, March 14, 1857 : McFarland & Jenks. 4 pp.  49 x 64 cm. Report of the inaugural parade and inauguration speech of President James Buchanan. Text of speech includes mild swipe at his predecessor, Franklin Pierce. Comments on right of territories to decide upon slavery. present financial situation: Too much money on hand. He has ideas for that, including depleting the national debt and building up the Navy. He argues for the Pacific Railroad. More comments on slavery, and the agitators. He hopes this agitation is nearing its end. Discusses "peaceful" acquisitions from . "We have never acquired any territory except by fair purchase..."   Report from of final illness and death of Dr. Elisha Kent Kane.  Plans for national monument to Henry Clay, to contain the remains of the matchless orator and unsullied patriot.  Commentary of the Election-- sober second thoughts of the people of . Newspaper, small holes and tears in folds, poor. (8229) $24.00. Newspapers/History
New-Hampshire Patriot & State Gazette, Concord, NH Tuesday morning, June 13, 1820  Concord, NH: Hill & Moore, Publishers          4 pp. 36 x 55 cm. An Act of Congress to impose new tonnage duty on French ships, signed by President Monroe, is published, along with several other laws.  The Legislature of the State of assembled for the first time at on May 31st. Gen. King is elected Governor. Letter from reports that 18 men convicted as pirates are to be hanged, and their accomplices have been setting buildings on fire in order to draw citizens away from the prison. Discussion on Religious Freedom.  Now that has been separated from , that state may produce a new constitution which will remove all religious tests.  American ships engaged in the African slave trade now number over 200; by a new law of Congress, all who engage in this trade will be adjudged pirates, and on conviction are to suffer death. Excellent Tavern Stand near the lower meeting house in is for sale. It is situated in a very pleasant and flourishing village and on a great public road (the fourth NH turnpike).  New line of stages has commenced running from to three times a week. Leaves at 4 a.m. and arrives at 5 p.m. Price of stage-fare $3.50. Newspaper, good.  Rag content makes this very durable paper. (8230) $33.00. Newspapers/History

Courier, , Thursday, August 27, 1829 : Adams & Holden, Printers. 4 pp.   39 x 54 cm. ceremonies will commence at 11 o'clock today for inauguration of Hon. Joseph Story LL.D. and of John Hooker Ashmun, A.M. Order of procession is detailed. Tomorrow is the annual commencement. Editor laments fact that some speeches were in Latin.  Poetical Statement of Ladies' and Gentlemen's Fashions: "Gowns are made full like a bag… they may gather up plenty of dirt...the hats are so large, and so monstrously wide, that a coach can now take but one of a side..."  "To shave off the beard is accounted a sin..."  Letter from a Boston Merchant reports on --how they sleep, with head on a wooden cushion; Japanese are fond of show and what furniture they have is for sight rather than service.  Basil Hal's Travels: The English nation sent this "titled fool" to write his travels in this country. He observes that the "women of the do not enjoy that station in society which has been allotted to them elsewhere."  Listing of fine coppered brig Ivanhoe will sail for and ; a good vessel has half her freight, sailing for ; Packet brig James will sail for on Saturday. Fast-sailing copper-fastened and coppered packet brig Sardius is sailing for New-Orleans. Newspaper, good.  Rag content makes this very durable paper.          (8231)  $26.00. Newspapers/History
Memoirs of the Harvard Dead in the War Against , Vol. I, The Vanguard by Howe, M.A. DeWolfe1920 , : Press.  Volume I the Vanguard includes the memoirs of thirty Harvard men whose deaths occurred before the entered the European War. Over 360 Harvard men died in World War I, and these are included in Vols. II through V. This volume contains the memoirs of George Williamson '05, Edward  Stone '08, André Chéronnet-Champollion '02, Harold Marion-Crawford 11, Calvin  Day 12-14, Carlton  Brodrick ’08, Harry Byng ’13, Henry Farnsworth ’12, Charles Cross Jr. 03, Archibald Ramsay 07, George Taylor 08, Allen Cleghorn (Instr), Crosby Whitman '86, Merrill Gaunt, Victor Chapman ’13, Clyde Maxwell '14, Alan Seeger '10, Henry Coit '10, Robert Pellissier '04, John Stairs (Law '14), Dillwyn Starr '08, William Lacey DMD '13, Norman Prince '08, Edward Sortwell '11, Edgar Shortt '17, Henry Simpson '18, Howard Lines (LLB '15), Lord Gorell (Henry Barnes) (Law '04), Addison Bliss '14 and Henry Suckley '10. Many colorful stories of the heroism of fine young Americans, Britons and Frenchmen. 200 pp. 15.6 x 23.7 cm. Red cloth on board with gilt page tops, title in gilt, cover bright and clean, spine sunfaded, several pages unopened, very good. (1742) $49.00. WWI/Biography

Song of Hiawatha, The by Longfellow, Henry Wadsworth 1856 Boston, MA: Ticknor and Fields Poem by Longfellow is founded on a tradition prevalent among North American Indians, author says in copious notes at end of book. 316 pp. 11 x 17 cm. Marbled paper on board with calf spine and corners. Leather from spine missing. Inside front hinge cracked. Poor. (2864) $23.00. Poetry/Literature.

True Friendship Like The Ivy Clings--Book of Poetry 1912 : Dodge Publishing Co. Little booklet of poetry."Not on the store of sprightly wine, Nor plenty of delicious meats, Though generous Nature did design To court us with perpetual treats,-- 'Tis not on those we for content depend, So much as on the shadow of a Friend.” From the Greek of Menander. Also poems by Robert Louis Stevenson, Robert Burton, Lady Mary Wortley Montagu, J.G. Fichte, Lord Bacon, William Law, Elizabeth Charles, Thoreau, Emerson, Max Ehrmann, many more. 44 pp.                9.5 x 19.6 cm. Paper booklet fastened with decorative ribbon, title embossed and gilded. Spine frayed bottom 4 cm. Back cover stained. Fair. (7507) $20.00. Poetry

Voices of Life by Lesdernier, Emily Pierpont 1853 New York, NY: Cornish, Lamport & Co. Editor's note  calls poems spirited and touching, and notes that author has "adopted this mode of sustaining herself and her three children, left dependent on her exertions."  Poems include "Voices of the Sea", "A Vision of Life", "The Vigil of the Homeless", "A Romance", "My Island Home". In her poem "To--" one gets an inkling of Ms. Lesdernier's sad story: "Thou has thrown aside thy duty; but a mother's heart is strong..."  38 pp. 11 x 18 cm. Decorated cream paper on board, spine paper badly torn, edges worn. One page has 3 cm closed tear, some browning of pages, poor. (1733) $20.00. Poetry

Posted by The Personal Navigator at 11:36 AM